What is the Logitech G610 Orion?

It marks a departure from other recent Logitech gaming products: those have been brighter and more outlandish, and they’ve also relied on Logitech’s own proprietary mechanical switches.

The G610 is sold in two variants: one with Cherry MX Red switches and the other with Cherry MX Brown hardware. They’re both top-notch mechanical switches from the accepted masters of the craft, and both are quite different.

I’ve tested the Cherry MX Red version of this keyboard. That switch is one of the lightest and softest that Cherry produces, with a modest 2mm actuation level.

The Red switch travels on a consistent path downwards, without the bump in the middle that features on many other Cherry MX designs. The light touch and lack of bump make the Cherry MX Red switch quieter than most, and it feels faster than many others.

Cherry MX Brown switches are far more traditional. They’ve got the same 2mm actuation point, but there’s a noticeable bump in the middle of the pressing action – so you get the tactile feedback that many people associate with mechanical switches. That can make a Cherry MX Brown keyboards feel more solid and responsive, but conversely it can also feel a little slower. It’ll be far louder, too.

The no-nonsense, slick action of Cherry MX Red hardware is reflected in the G610’s external design. This isn’t the kind of gaming keyboard that’ll attract attention with outlandish aesthetics. Instead, the G610 is built from impressively sturdy plastic that’s matte on the top and glossy around the sides, and this solid rectangular slab has three height levels and huge rubber pads on the base to stop the keyboard sliding. 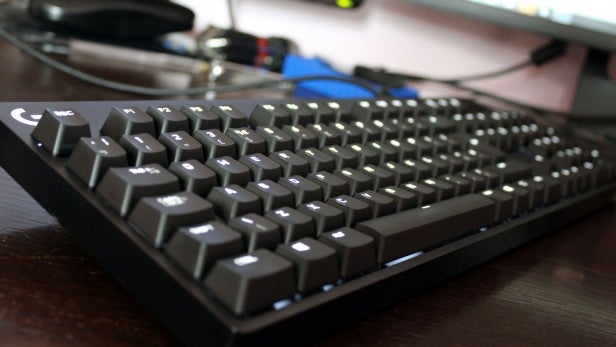 The looks could prove divisive: some will like its pared-back and smart design, while others will wish for more theatrics.

The feature set will likely prove divisive, too. I’m pleased that Logitech has included a set of media buttons – including a volume roller – and I’m always happy to see a long, braided USB cable. Every key is backlit and can be customised in software to turn off, stay on or respond to patterns or touches. There’s macro control from Logitech’s Gaming Software app – although macros can only be programmed to the F keys.

However, the G610 is lacking in other departments. That backlighting is only restricted to white rather than the popular RGB lighting, and there aren’t any dedicated macro keys. The Logitech also misses a wrist-rest and pass-through USB ports. No accessories are included in the box, either.

The G610’s nearest challenger Trusted has reviewed is the Qpad MK-90, which corrects many of those feature absences. It has two USB ports and full RGB backlighting, two audio jacks and a wrist-rest, and a key removal tool is included.

The MK-90 also has full n-key rollover, which is better than the 26-key rollover included in the G610 – although you’ll have to be mashing a silly number of buttons to hit the Logitech’s limit in that department.

The MK-90 falls behind, however, when it comes to its design: its proprietary mechanical switches mimic Cherry MX Red hardware but aren’t as good, and its plastic design isn’t as smart as the Logitech’s matte finish.

The lack of features in the G610 means that the Logitech Gaming Software utility is one of the simpler companion apps I’ve seen.

The main screen serves up a birds-eye view of the keyboard, and clicking different sections of the unit allows for customisation. The lighting strength and effects can be altered in one section, profiles are found in another and macros can be quickly added to the function keys in the third section on the app’s front page. 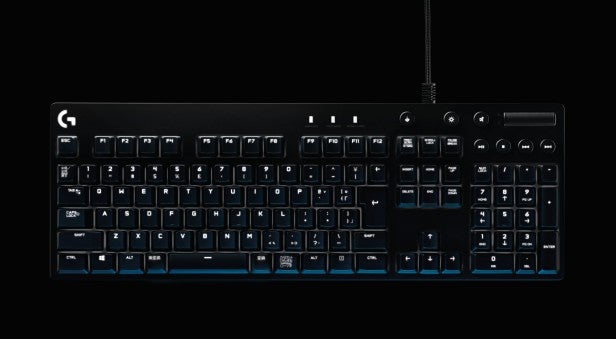 A row of icons at the bottom of the app look like more fine-tuning will be available in other sections, but that’s not the case – those buttons merely open up the same three sections again.

A fourth icon opens up a heat-map tool that can track key presses, and there’s a settings module that can scan for new game profiles, record quick macros and update the keyboard’s firmware. There’s a little more granular control of game profiles hidden away in the settings menu, too.

Logitech’s software is a little easier to use than the clunky app included with the MK-90, but the lack of features on this keyboard means the app isn’t brimming over with options. Like much of the G610, it’s smart and serviceable, but it doesn’t do much to stand out.

The Cherry MX Red switches are noticeably different from many more traditional mechanical keyboard designs, and that comes with a host of pros and cons.

The smooth and soft action of the Red switches works well with the G610’s rock-solid design. The keys travel downwards into a firm base and respond positively, with consistency and comfort. I never had concerns about hitting the wrong button or the keys getting wobbly, and I never had keys fail to register because my touch was too light.

My only issue is the difference in feel between the G610’s largest and smallest keys. The normal-sized buttons display the comfortable and reliable action I’ve described above, but the shift, return and backspace keys are all softer – not a dealbreaker in the midst of fast-paced typing, but noticeable.

Related: The Best Motherboards for every budget

The spacebar has this issue, and it also produces a high-pitched click when tapped – in stark contrast to the relative quiet of the rest of the G610’s buttons.

Other issues will be subjective. Gamers used to more traditional mechanical units may prefer a typing action that’s clickier and more clinical – and in that case the Cherry MX Brown switches of the other G610 model will be better.

It’s no surprise that the G610 feels a little softer and more welcoming, though: the lack of game-specific features and the inclusion of media buttons makes this unit feel more like an all-rounder than a specific gaming keyboard.

The G610’s Cherry MX Red switches deliver a largely impressive typing performance, and I’m pleased that Logitech has ducked away from its proprietary hardware for the G610. The solid typing also means the Logitech streaks ahead of the Qpad MK-90 in performance tests, as that keyboard suffered from a typing action that was too stiff to be comfortable.

Should I Buy the Logitech G610 Orion?

There’s little difference in price between the G610 and its main rival from Qpad, but far more to set these two keyboards apart in daily use.

The G610 is a smart, subtle unit that clearly favours a great typing experience: its usage of Cherry MX Red and Brown switches delivers a better typing action than the Qpad, and its white backlighting delivers more sleek visuals.

Logitech’s keyboard falls behind in features. It doesn’t have RGB backlighting or dedicated macro keys, it’s missing USB ports, and it doesn’t have a wrist-rest or any accessories. To get this level of Cherry MX hardware and all of those features, you’re going to have to spend more money.

To me, though, the core typing experience is more important at this price – and that’s why I’d rather have the G610 than the MK-90, despite its missing features.

It’s light on features, but the typing experience is second-to-none.