The Logitech G602 is a formidable wireless gaming mouse from a company known for making considered, reliable peripherals. The G602 doesn’t disappoint in this regard, with Logitech offering a low-lag, well-designed mouse that’s great for its price.

While this model is more than a year old now, you can buy it new on Amazon for £60, which means it’s definitely still a worthwhile consideration. But what exactly makes the Logitech G602 good, and where could the mouse-maker learn from its mistakes? 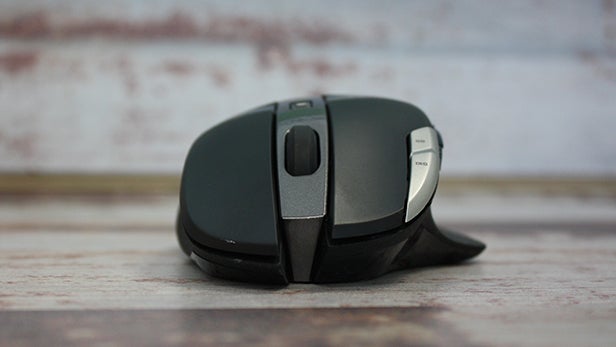 Logitech hasn’t rocked the boat when it comes to mouse design, peddling a familiar shape and button configuration. Even those new to gaming will feel right at home with this mouse. The downside is that it’s not as luxurious as Razer’s Chrome devices, nor is it as quirky as a Mad Catz mouse.

The G602 is a right-handed mouse, and is most comfortable when used with a palm-grip. A thumb-rest juts out from the side for added support and ribbed rubber improves grip when your palms get sweaty. The curvature of the mouse feels natural, and we’re happy to say this is one of the most comfortable designs we’ve ever used.

There are 11 buttons on the G602, including left and righter clickers, a performance mode switcher, up and down DPI toggles, six re-programmable side buttons and, of course, the scroll wheel. Buttons are fewer than on MMO-focused devices such as the Logitech G600 or the Razer Naga, but this is intended to be more of an all-rounder mouse. 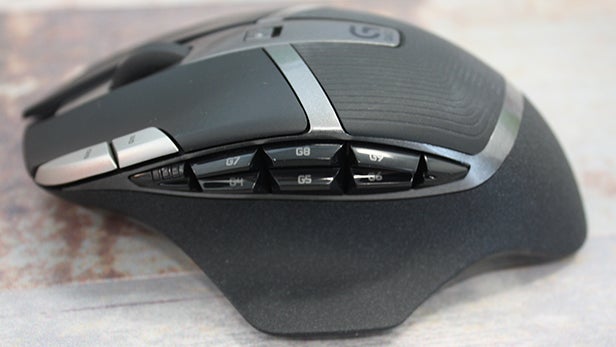 Logitech’s button placement is well thought out. All are easy to access, with perhaps the exception of the performance mode switcher, which is a little more awkward to toggle. What’s great about the G602 is that the side buttons can be easily differentiated, despite being small and close together. A row of blue LEDs on the side of the G602 are used to display which DPI level you’re at – more on that later.

Obviously, the lack of wires results in a mouse that’s easy to slide around, but its smooth bottom also helps it to glide across most flat surfaces. It’s not a cumbersome beast either; it weighs 107g, which is around the sum of two Dairy Milk bars. It’s also lighter than rival Razer Mamba, which weighs 125g. 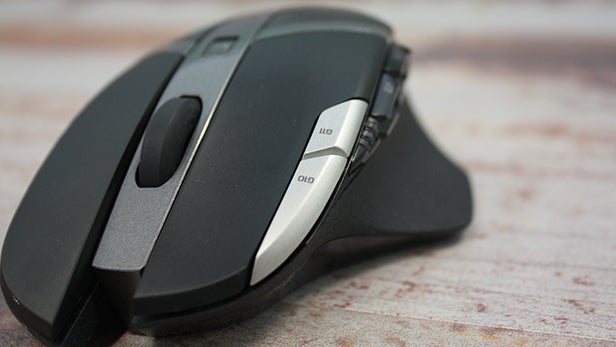 Unlike normal mice, a gaming mouse needs to have a good DPI range. That’s because DPI is a mouse’s native sensitivity; a high DPI means the cursor travels farther in relation to your hand movements, allowing you to perform actions more quickly.

The G602 has a DPI range between 250 and 2,500. The former is too slow for anything but general browsing, while the latter is just about good enough for gaming. Pro gamers typically use mice with DPI settings that are upwards of 4,500, or even up to 8,200 like the Turtle Beach Grip 500. As such, serious gamers might want to look elsewhere; casual players that aren’t concerned about hyper-twitch gameplay will be fine with the G602. The wireless Razer Mamba touts a maximum 5,400 DPI.

Logitech’s wireless mouse has an otherwise respectable spec sheet, boasting a super-accurate Delta Zero sensor and a respectable 500Hz polling rate – that’s how many times per second the mouse pings your computer. Anything above 500Hz really isn’t necessary, and will just put strain on your computer’s processor. 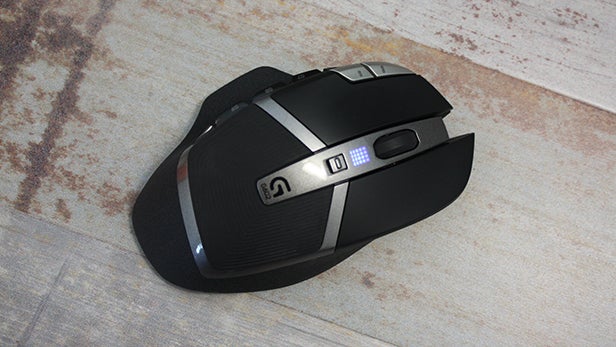 Of course, this is a wireless mouse and as such, the elephant in the room will always be battery life. Fortunately, Logitech has got it spot on with the G602. The mouse is powered by two AA batteries as standard, which amounts to around 250 hours of gameplay. But the mouse has been designed to also work with a single AA battery, for a lifespan of 125 hours. This enables you to keep down the weight of the mouse, if you want to maximise your performance.

What’s more, Logitech has also bound a mode switcher to the G602’s central button. You can use this to switch from “performance” mode to “endurance”, which will give you 1,440 hours of battery life. However, this does reduce response accuracy and sensitivity, so you’ll want to use this only when you’re not actually gaming. 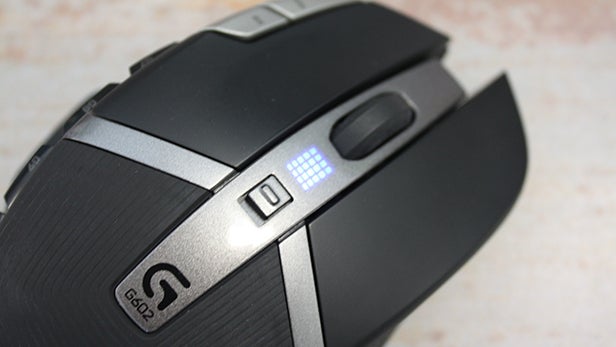 Unlike some of its rivals, Logitech’s software suite lacks a snazzy name – however, this doesn’t mean it’s not a great program, and it includes a number of useful features.

To install the software, just plug in the wireless 2.4GHz USB receiver that’s supplied with the mouse. Now’s a good time to point out that the G602 also comes with a USB extender cable for the receiver, which you can use to reduce the distance between the dongle and the mouse. Once the receiver is plugged in, the driver will install automatically.

Once the software is booted up, you’ll have access to a host of features. You can re-adjust the DPI toggle presets, program macro commands for various buttons, and set up game profiles. Moreover, you can even assign profiles to games – these are saved in the mouse’s on-board memory. The software then automatically detects when a particular game is booted up, and loads the relevant profile. 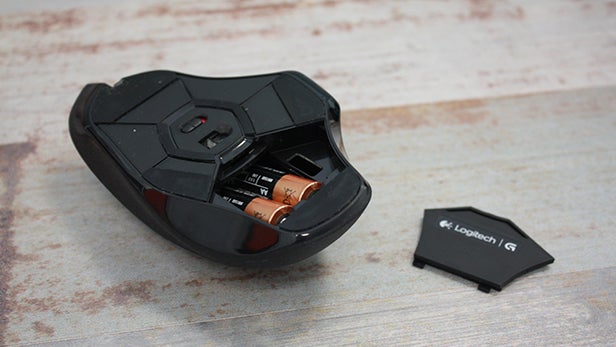 Like all gaming mice, the G602 has its strengths and weaknesses when it comes to various video-game genres.

We found that the G602 was best suited to MOBAs. This is largely down to there being enough re-programmable buttons on the mouse to be useful for games such as League of Legends and Dota 2. The maximum DPI is also more than enough to keep pace in battle-arena-style games. The same can be said for real-time strategy games – the G602 will work just fine with StarCraft II.

Where the G602 wasn’t so great was with first-person shooters, and this is due to the low native sensitivity. You simply can’t whip a cursor across a screen as quickly as someone running a mouse with 6,000-plus DPI, so it makes it tough to compete in games such as Counter-Strike and Call of Duty. Of course, casual players won’t have an issue, and the tracking is more than reliable enough to aim accurately at a shooter.

We also tested the G602’s MMO credentials with World of Warcraft. Compared to the 19-button Razer Naga Epic Chroma, the G602’s button spread seems paltry. However, most MMO gamers will find 6 side buttons more than plenty to play competently.

In general, we found the G602 performed well across a variety of games. This is largely down to the consistently smooth tracking, which is a result of Logitech’s impressive Delta Zero sensor, as well as the great wireless connection. Logitech claims a “lag-free” 2ms response rate, which we can vouch for as being almost impossible to notice. Honestly, it felt like we were using a wired mouse, with or without a mousepad. 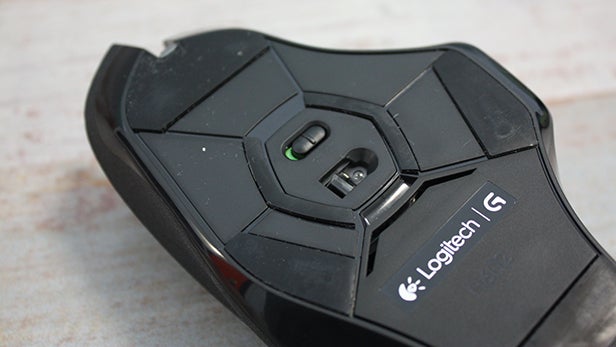 Should I buy the Logitech G602?

The market for gaming mice is oversaturated, so you have to be sure to choose a device that fits your needs.

The G602 is a comfortable mouse, much more so than the Razer Naga, and one that you could quite easily use for work/leisure activities outside of gaming. We used it for full work days without any issues with wrist fatigue, for instance.

That said, the max DPI isn’t spectacular, and there are really only six free buttons to mix up, which puts it out of the running for hardcore shooter/MMO gamers. Thus, this is an all-rounder offering for casual players who’ll be gaming across a wide-range of genres.

While it may lack the jazzy lighting, astronomical specs, and a greater number of buttons and wheels, for reliability, versatility, and value this is a brilliant wireless mouse that won’t let you down in the heat of battle.

The Logitech G602 is a trusty wireless gaming mouse that doesn’t reinvent the genre, but gets almost everything right for a reasonable price.