The Logitech G513 is a top-end luxury keyboard for gamers who demand the best tools for gaming. Equipped with Logitech’s own mechanical keyswitches, the G513 stands tall against its rivals – and with three switches available, there’s something for everyone.

At £159.99, it’s definitely an expensive purchase to justify however; you’ve got to be pretty invested in PC gaming to truly get value for money. But if you’re after something that’s attractive, well built and fabulous for gaming, the G513 is a cracking option. 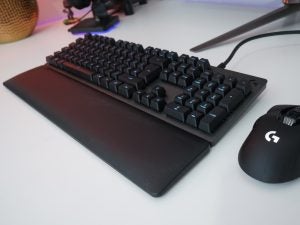 The G513 is a full-sized keyboard, and unlike a lot of gaming boards, it’s actually quite suave and sophisticated. The design oozes quality, with a brushed metal plate across the entire top face that’s smooth to the touch. In combination with a plastic underbody, it forms a strong and rigid structure that’s free from any flex.

Each key appears to almost float in place, with a bright RGB LED shining through every cap. The layout is pretty minimalistic – there are no dedicated media keys – and the function keys are labelled on the lower side of each cap.

You’ll familiarise yourself with the positioning of each function over time with muscle memory, but they’re not that easy to read when you’re trying to learn the layout. The volume wheel and media keys on the ROG Flare and Corsair K95 are much easier to use.

At back of the keyboard you’ll find two legs for height adjustment, as well as a braided USB cable for connecting to your PC. Thankfully, it seems a fair bit thinner than the Corsair K70, and like the K70, the Logitech G513 offers a USB passthrough for connecting a mouse or headset. 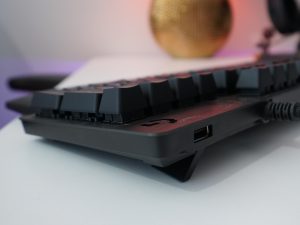 When it comes to gaming and typing, the G513 proves its credentials with flying colours. Logitech supplied a review unit with tactile Romer-G switches, although linear Romer-G and clicky GX Blue switches are also available.

My testing largely consisted of typing up large scripts and emails, in addition to late-night sessions of PUBG and Fortnite. I’m a huge fan of tactile switches, since they’re great for people like myself who like to work and play.

I’m not sure if I prefer the Romer-G switch over Cherry’s – they’re somehow quite similar yet different at the same time. The tactile nature means you get a slight bump upon activating the key, which can help reduce typing errors and make for faster write-ups. The Romer-G Tactile has a rather pleasant smoothness as you press each key, and as such, I easily see the G513 staying on my desk for quite a long time.

Gaming, too, is handled with grace and finesse. While an expensive board is unlikely to turn you into a professional, the mechanical nature adds that ‘snap’ to key presses that makes it hard to ever go back.

I’ve really enjoyed my time with the keyboard – the G513 isn’t only extremely comfortable to use, but it adds an extra layer of involvement to the gaming experience. It’s a sublime keyboard for Battlegrounds. 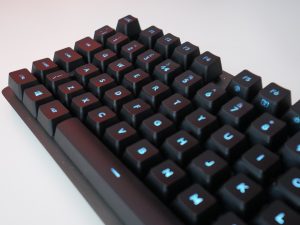 Lighting is an interesting one, since the G513 is actually my new favourite keyboard for RGB integration. This is really down to the software interface, however.

While it’s simple enough to use, there aren’t enough options or customisation when compared with Corsair’s iCUE. You can quickly set macros and choose and sync preset lighting options, but it could do with a UI overhaul.

However, the trick that Logitech does have up its sleeve is with game integration – as, put simply, the G513 is the most useful implementation of RGB lighting yet.

They call this ‘Lightsync’, and with over 300 supported titles, there are many more games that work with it compared against the competition.

Games such as Mass Effect Andromeda and Battlefield 1 light up the keyboard upon launch, changing the RGB to new patterns that reflect what’s happening in-game. It works pretty perfectly, and while it’s more subtle than Logitech RGB speakers, it’s a really nice touch. 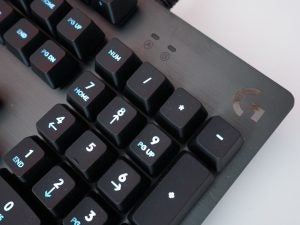 The Logitech G513 is a prime example of what a gaming keyboard should be: elegantly designed, great for typing, and snappy for gaming. Logitech should be very proud of its latest offering, and it’s excellent to see some genuinely useful RGB lighting.

Price is the biggest moot point, as at £159.99 it isn’t only expensive, but has some steep competition from Corsair, ROG and Razer.

Nevertheless, if you like the sound of the unique switches, or maybe want that Lightsync integration, the G513 will serve you well for years to come.