The G502 is a popular mouse – I use one at work and on the move, and for a little while it was even my daily driver. My situation isn’t unique either: anecdotally, many of my friends use a G502 too.

It’s a popular mouse, so what’s the deal with its latest iteration, the G502 Hero?

What is the Logitech G502 Hero?

Such is the case with Logitech’s G502 mouse. The mouse hasn’t changed drastically since it came onto the scene in 2013, aside from adding some RGB lights somewhere along the way. Hero here stands for High Efficiency Rated Optical, so when this particular hero comes along, it’s got a fancy new sensor with 16k DPI.

There have also been a few external changes to the design, with the addition of two new programmable buttons on the side of the left click button, a nicer-feeling scroll wheel, and a few cosmetic changes that simply bring it more in line with the perception of what a modern gaming peripheral should look like in 2018. 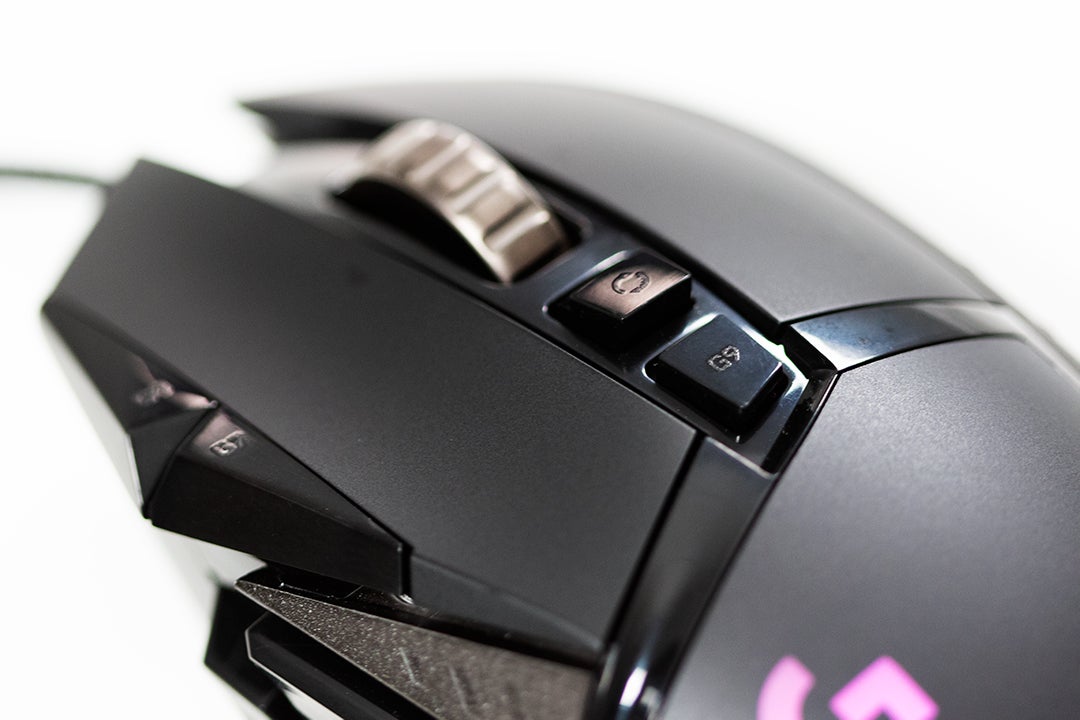 The 502 Hero is a chunky gaming mouse that fits best in larger hands. As a journalist with hands like baseball mitts, the G502 works well for me, but it can be weighty in the hand, coming in at 121g compared to many gaming mice sliding in around the 90g-100g mark. Whether this weight will work for you is a matter of personal preference, but in the box there are also additional mice that can add up to 20g to the weight of the mouse, making it particularly hefty.

In addition, the contouring on the outside of the mouse slopes the left and right buttons of the mouse in a way that fits the form of your hand nicely if you’re using a palm grip. A claw grip is workable, although not the best fit ergonomically, while a looser fingertip grip just didn’t work for me at all.

The biggest pain, for me, are the two buttons on the outer side of the left mouse button, which are mapped as default to adjust your DPI on the fly. However I, with those huge hands, kept accidentally hitting them. A problem that several people in the office with more modest mitts didn’t encounter. This could just be because I’m deeply clumsy, but it feels worth flagging up.

Elsewhere, there’s a fantastic scroll wheel, which can be unlocked to freewheel through pages, or locked for incremental play, like if you want to switch weapons in an FPS or, shudder, fire dual elites in Counter-Strike: Global Offensive. The metal wheel is satisfyingly tactile, and also features a left and right click that can be activated by moving the scroll wheel from side to side, if you’re into that. 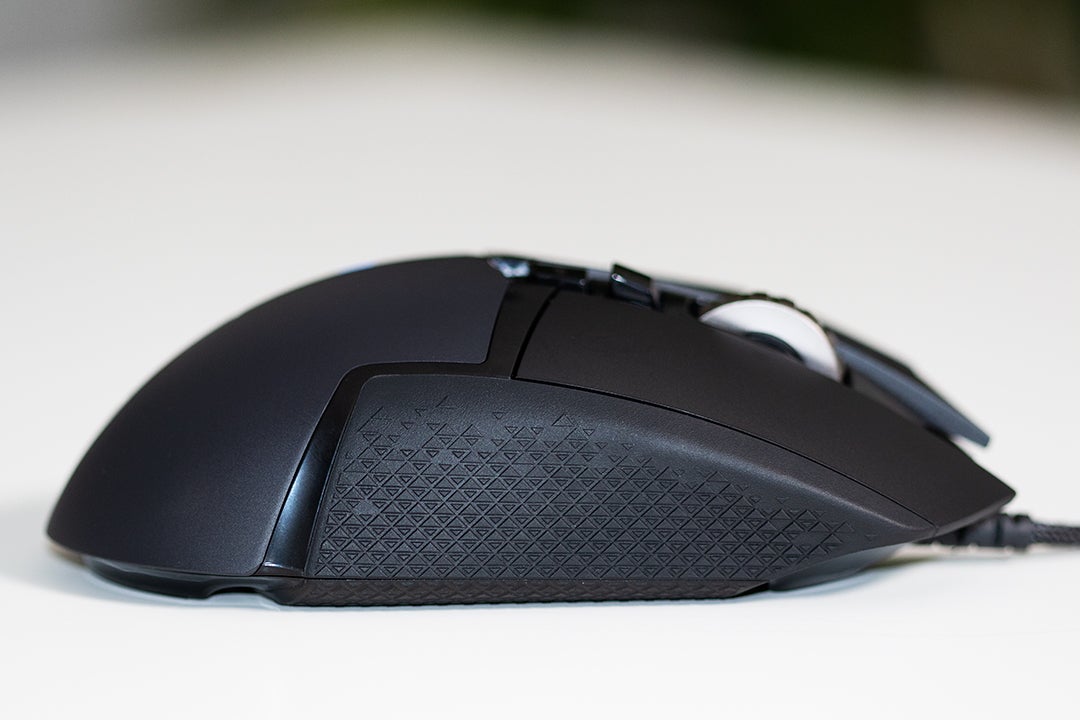 No messing around here, this is a great mouse. The G502 has long been a reliable tool, and the G502 Hero doesn’t mess around, keeping most of the package the same and merely putting a better sensor into the mix.

There’s no immediate difference when playing shooting games, and indeed while plowing through my usual mix of Rainbow Six Siege, PlayerUnknown’s Battlegrounds and Killing Floor 2, games that each have their own tempo, I found the G502 Hero easily keeping pace.  There are 11 buttons here, and all of them are solid, with the ones on the shoulder of the left click button reprogrammable using Logitech’s software. 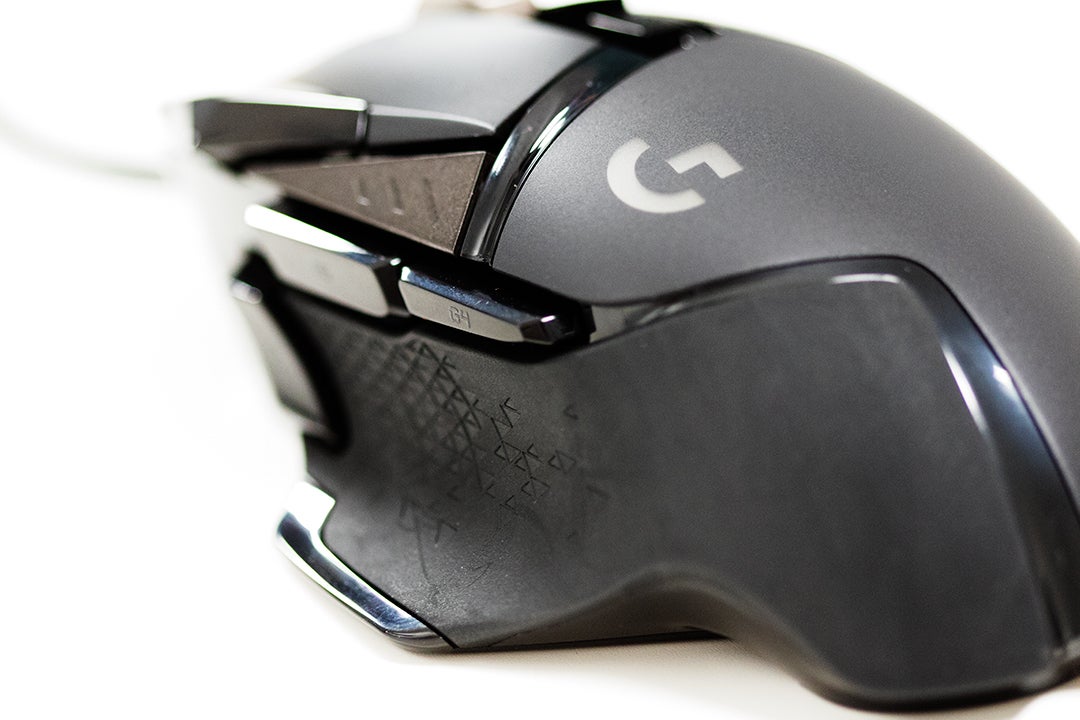 Logitech’s software is mostly useful for letting you reprogram buttons on the mouse and customise the RGB lighting. There’s a wealth of customisation options here for the lighting, letting you change brightness, colours and even how often the lights pulse, allowing you to turn the lights down low if you’re a little tired of your entire desk winking at you from across the room.

Without the customisation, the G on the top of the mouse – hidden by your palm – is lit in a soft white light, occasionally rotating through a soft spectrum of colour that is fairly inoffensive. However, with full RGB lighting you really can go all the way towards trashy light show if you’re so inclined.

The software is easy to use, and because it’s Logitech, unlikely to see support dropped for it any time soon.

Why Buy The Logitech G502 Hero?

If you’ve already got a G502, this probably isn’t worth the update. However, the G502 is one of the best mice on the market, and this continues that trend.

The £80 price tag might make you wince, but Logitech’s kit is generally top notch, and if my still-working launch model G502 is anything to go by, you can expect this to go the distance, too. It’s replaced the base model G502 as my day-to-day work mouse, and travels with me for fragging on the go. Still, with the G502 still on sale and bringing most of the tech to the party for a shade under £50, it’s hard to see why you wouldn’t just go for that. 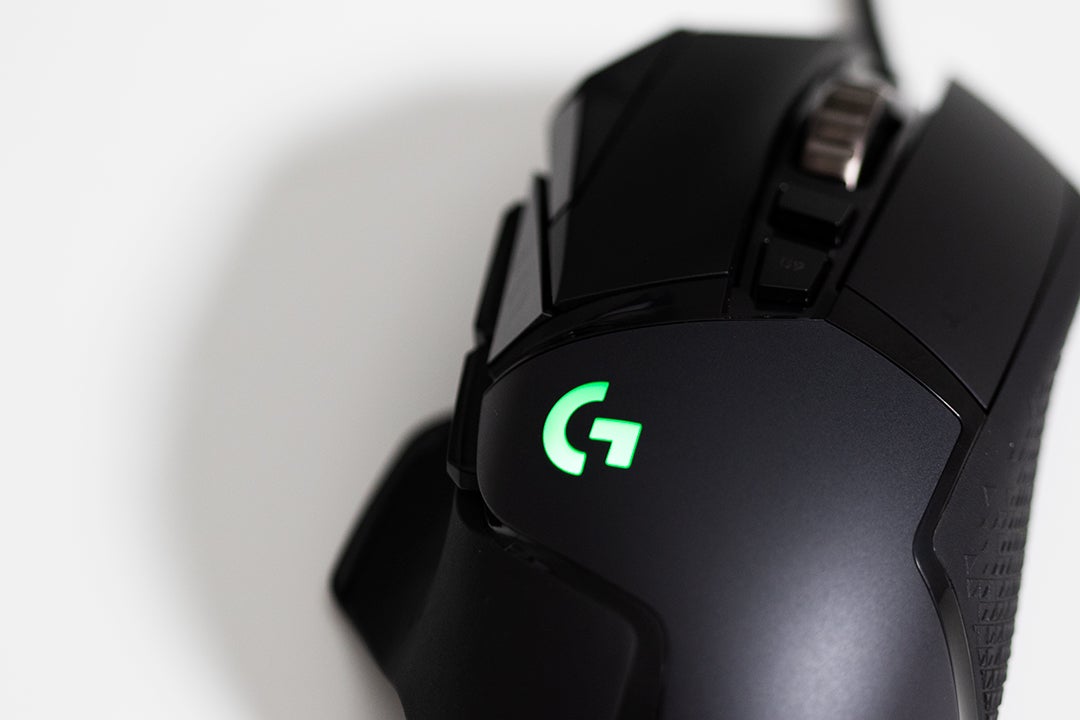 Logitech’s G502 Hero is a worthy update at a slightly unreasonable price tag. If you’re after performance at any cost, this is the best G502 on the market. For most people, they’ll probably just buy the inexpensive older model, and I can’t think of a single argument to dissuade them.