Logitech has a rich pedigree in peripherals, even more so those of the gaming variety, and like any manufacturer it’s constantly refreshing and refining its products. However, while the Editor’s Choice Award-winning G15 Gaming Keyboard has recently spawned the remarkable (if overpriced) G19 and more budget-oriented G110, we’ve waited a long time for a mouse to follow Logitech’s Award-winning G9. Enter the G500, whose lineage can be traced even further back. 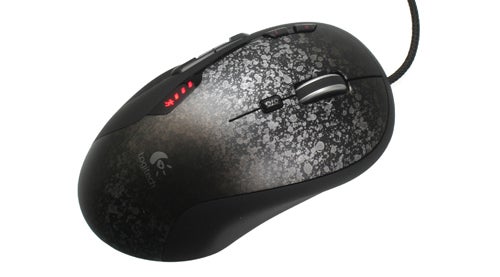 Logitech hasn’t just come up with one new gaming mouse, but two. One is the G500 under review today, while the other is known as the G9x. As the name suggests the G9x is essentially an upgraded G9, but the G500 sees the long overdue return of one of Logitech’s most popular gaming mice designs, the G5 – albeit with a few tweaks.


Aesthetically the G500 is a mixed affair. Its matte black sides contrast nicely with its piano-black buttons and red LED lighting, but we’re less keen on its mid-section’s ‘spattered paint’ pattern. It just doesn’t chime with the premium look and feel we expect. We far prefer some of the lightning, ripple or brushed steel effects Logitech used on the likes of the MX518. Hopefully future editions will add more attractive finishes or just revert back to ‘plain’ plastic like most other mice. 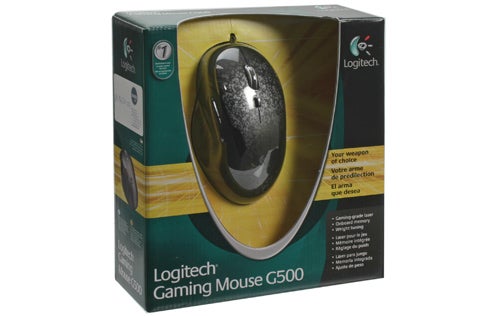 Aesthetic preferences can be highly subjective though, and there are sure to be readers who love the current look. More importantly, what about ergonomics? Since the oft-rumoured additional grips for the G9 never materialised, if you’re after a larger mouse the likes of the G500 are your best bet. 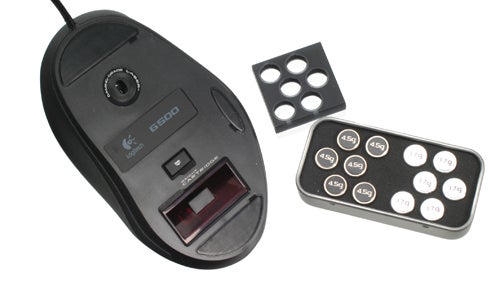 Compared to the G5 there have been a few very subtle changes, with the thumb indent providing slightly less support than before (not a good thing) and a rough, grainy texture on the sides replacing the soft-touch sides on G5. However, this is still a very comfortable mouse – certainly more so than the G9, unless you’re exclusively a finger/claw rather than palm gamer.

As expected of Logitech, all the G500’s buttons offer excellent feedback, with the main left and right buttons especially giving just the right amount of click. There are 10 programmable buttons altogether: three thumb-buttons, two to adjust DPI, the two main ones, and of course the four-way clickable scroll wheel. 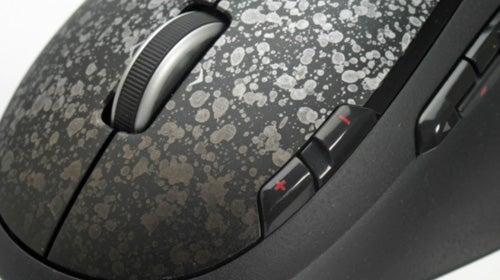 Below the micro-gear wheel is the “scroll wheel mode shift” button, which switches the wheel between notched scrolling for gaming and ‘free-wheel’ hyper-fast scrolling for lengthy documents. This button was located on the bottom of the G9 – meaning you had to turn the whole mouse upside down every time you wanted to switch – and it’s a huge improvement having it back on top where it belongs.

All the G500’s buttons are easy to reach, though we do slightly prefer the sideways DPI buttons on the G9 that you could access with your thumb. Also, while the new side button placement is more comfortable, it’s possible – albeit rare – to get the G500’s three side buttons mixed up in the heat of battle. Putting the middle button lower down and integrating it into the side, as with the superb MX1100 mouse, would have provided a superior solution. Still, overall the G500 performs very well in this regard too. 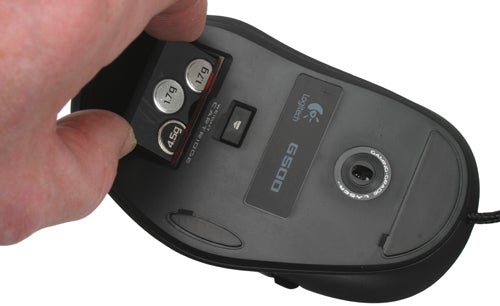 Like its predecessors and most contemporaries, the G500 has a weights cartridge system to adjust the rodent’s heft to your preferences. You get six weights of 1.7g and six of 4.5g in a metal case, allowing for up to 27 grams to be added. As with the scroll wheel mode button, the implementation here is far superior to the G9/9x: you simply press a button in the base of the mouse and the weights cartridge slides out smoothly.


As usual with Logitech, build quality is excellent. Everything, from its springy buttons to its braided cable, makes this mouse feel like a premium product. It’s just a shame that Logitech hasn’t found space for its response to Microsoft’s BlueTrack tech, the Darkfield Laser Tracking system. Like BlueTrack, it allows mice to be used on surfaces (e.g. marble, glass) that normal laser mice can’t handle, but its scope for hardcore gamers, with their gaming surfaces, is limited anyway.

So there’s no Darkfield, but that’s not to say there’s nothing remarkable about the laser sensor powering the G500. As far as we’re aware it’s the most sensitive gaming mouse around, with sensitivity ranging from 200dpi all the up to a massive 5,700dpi. Even the mighty Razer Mamba only manages 5,600dpi. This might be overkill for some, but it’s nice to have for those that can use it and if you don’t it’s not doing any harm.

As previously mentioned there are two dpi-switching buttons, and a three-bar red LED indicator lets you know what sensitivity you’re on. Without installing Logitech’s included SetPoint software, the mouse defaults to 400, 800 and 2,000dpi as its three presets. Once the driver is installed you can select up to five presets, with the dpi-LED bars darkening at the bottom to show the highest two settings. You can program these to anything between 200 to 5,700dpi in 100dpi increments and store them on the mouse’s onboard memory.


Here we come to the G500’s major limitation compared to the discontinued G9 and pricier G9x. It only has 8KB of onboard memory and can consequently store just a single profile (compared to five on the G9-series). Of course you can still store unlimited profiles on your hard drive or carry them around with you on a memory stick, but the G9-series’ ability to hardware-switch profiles mid-game – or mid-app, for that matter – and its accompanying colour-changing LEDs are sorely missed. 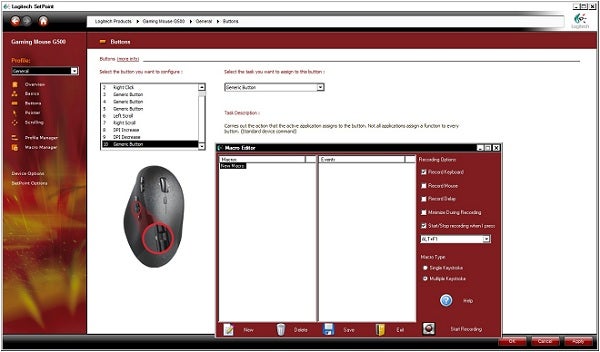 This does impact on the price, though, since the G500 is just £40 compared to the G9x’s £60. This makes it a good alternative if you want a competent gaming mouse without breaking the bank, while also appeasing those who loved their G5s and didn’t find the G9’s design to their tastes. It’s just a shame that there’s no alternative for those that want the features of the G9x and the ergonomics of the G500!


Finally it’s worth touching upon Logitech’s SetPoint software. As has been the case for the past few years Logitech’s software is fairly streamlined and easy to use. It’s not quite as slick as it could be, but then it needs to cater for every Logitech peripheral available. There are plenty of options to adjust the mouse’s sensitivity along the X or Y axis, assign functions, shortcuts, keystrokes or macros to every single button, as well as both custom and preset profiles.


If Logitech married the ergonomics of the G500 with the looks and features of the G9x it would have the ideal mouse. Provided you’re willing to put up with its minor flaws and limitations, however, the G500 is still an excellent and affordable effort.