What is the Logitech G213 Prodigy?

The Logitech G213 is a gaming keyboard that’s focused on delivering as many features as possible at budget-friendly price tag. It’s quite the package, with fully RGB backlit keys, dedicated media controls and endless software customisation.

There’s a bit of a catch, though: it doesn’t use mechanical switches. Instead, you’ll need to use membrane switches that Logitech has ‘tuned’ for gaming. I was sceptical at first, but after using the unit for two months, I have to say that I really love the G213. 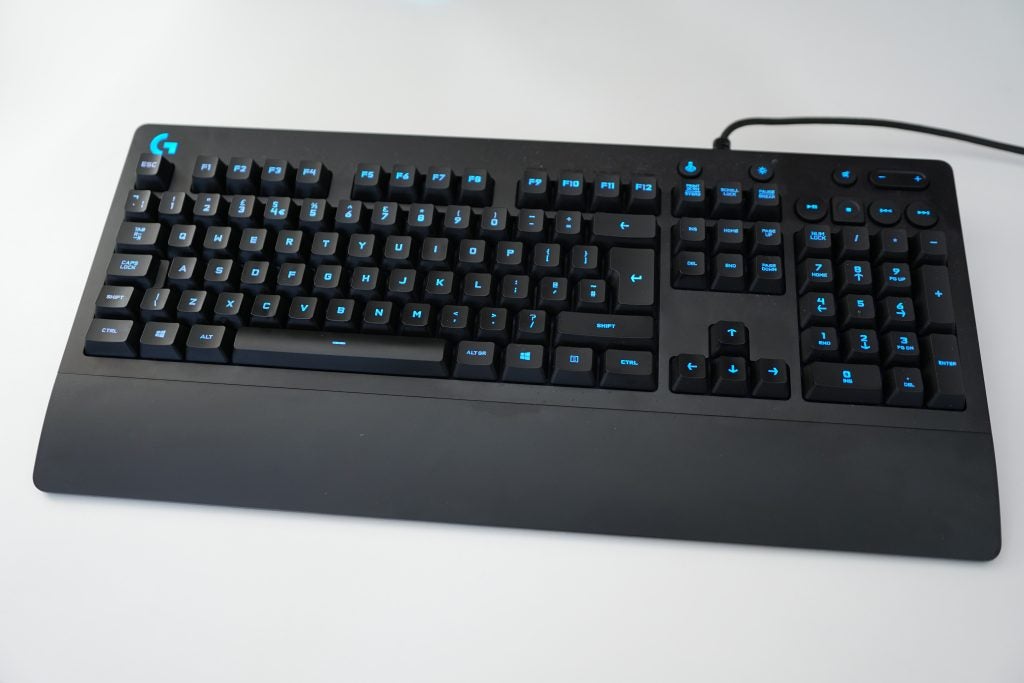 The G213 is a full-sized keyboard, and it’s definitely a little on the chunky side. This is in part due to the non-detachable wrist-rest on the bottom of the keyboard. But even thereafter, the rest of the board does perhaps seem a little bigger than it needs to be. If you have a smaller desk, you might want to look at something else.

Despite its size, I find that the G213 is a very attractive keyboard – although the body itself is made of plastic, which doesn’t feel particularly luxurious. Having said this, the G213 Prodigy does feel very sturdy, and certainly gets the job done. 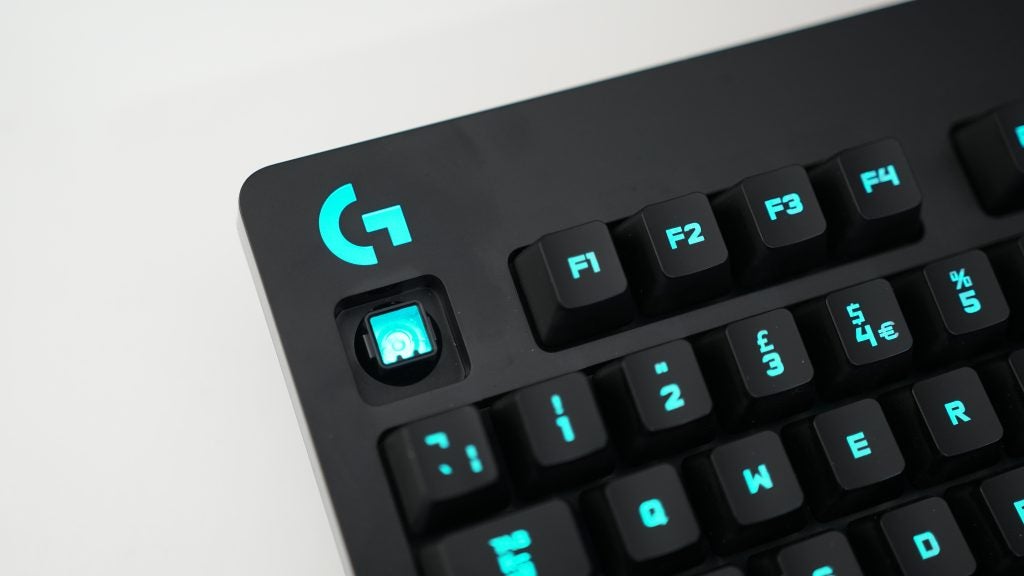 The underside is constructed from yet more plastic, and is fully height-adjustable thanks the the feet located towards the back of the unit. Sadly, the USB cable isn’t removable, but it is braided. There’s also no USB passthrough, which I’m sure will upset some potential buyers.

Each key is fitted with a hybrid mechanical-membrane key switch, and each houses an RGB lighting node within. This extends to the media keys, too, of which you’ll find play/pause and skip buttons, as well as volume controls and a ‘gaming’ key. The stop key is oddly-shaped, and looks a little out of place as a result.

A surprising feature that Logitech has implemented here is a level of water-resistance. I wouldn’t advise taking the keyboard into the bath, but the company says the unit has been been tested to survive liquid spills up to 60ml. 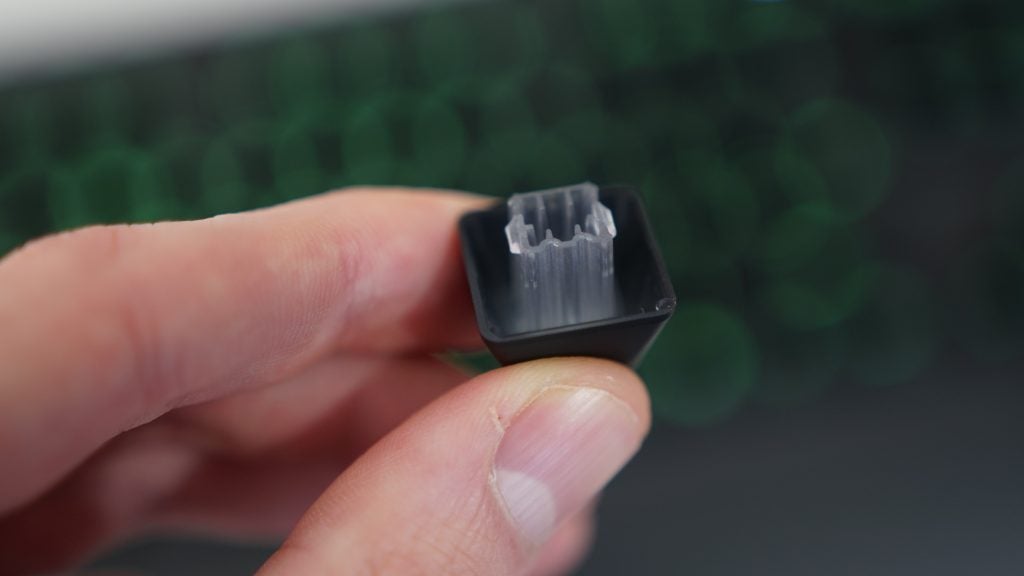 When you’re paying more than £50 for a keyboard, it’s fair to say that you’d expect a unit that excels across gaming scenarios. The good news is that no matter what I’ve thrown at the G213, I’ve always been impressed with its performance.

Having said that, the degree of difference between the G213 Prodigy and anything equipped with Cherry MX Red mechanical switches isn’t close to what I’d anticipated.

The Mech-Dome switches are far superior to my old Microsoft Sidewinder of yesteryear. If you look at full-sized mechanical keyboards with the same level of RGB lighting, you’d be looking at over double the cost of the G213, which is definitely food for thought.

I found both typing and gaming to be very pleasurable, with the keys feeling responsive enough that I always had the utmost confidence. The switches aren’t particularly tactile, and do display a slight ‘sponginess’ – something you’ll always get with rubber dome keyboards. Nevertheless, I’ve racked up more than 100 hours of gameplay across PUBG, XCOM 2 and Smite, and I’ve never felt the need to reach for anything more substantial. 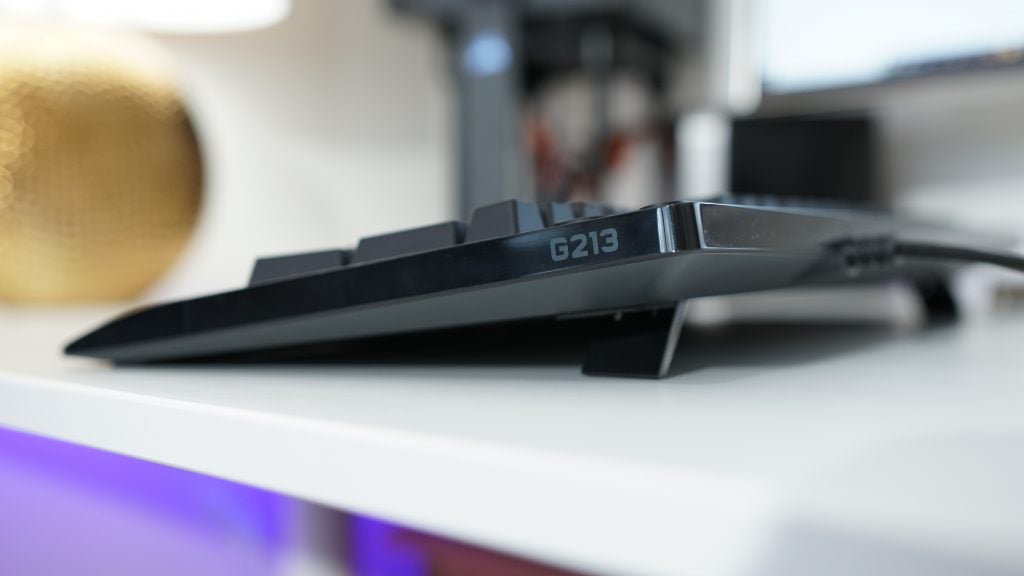 Above everything else, though, it’s the G213 Prodigy’s extensive customisation options that help it to stand out. The Logitech Gaming Software is particularly mature at this stage, and while it isn’t quite as extensive as Corsair’s CUE, it’s easy to navigate and allows for plenty of flexibility.

You can re-assign keys, create macros, and alter the RGB lighting to meet your tastes. The lighting isn’t the absolute brightest I’ve seen, but it’s certainly up there with much more expensive keyboards.

There aren’t as many effects to choose from compared to key rivals, but you can pair the G213 with games such as Smite, and applications such as Discord. If you own any other Logitech peripherals, you can of course sync the lighting between devices for a uniform look. 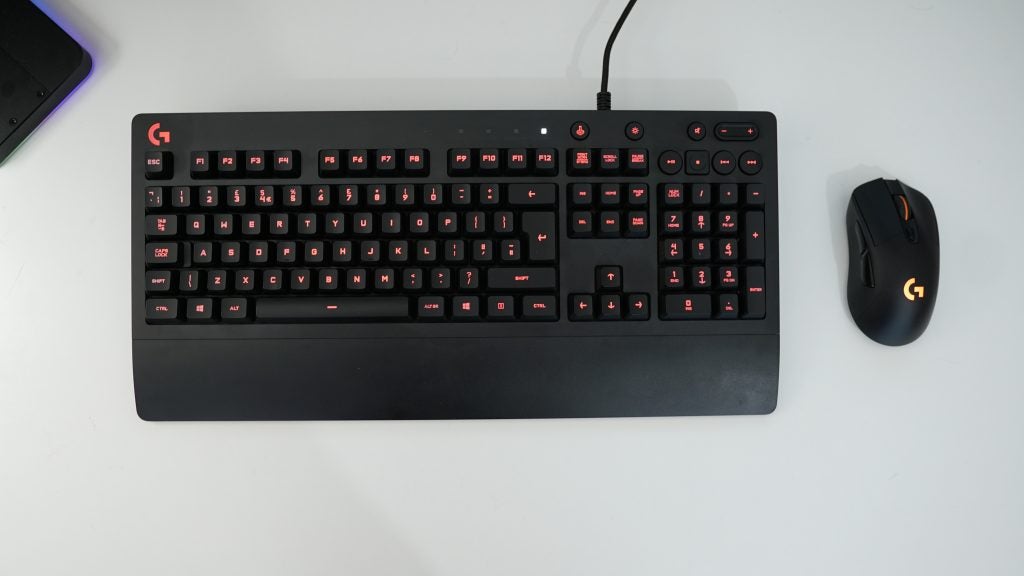 Why buy the Logitech G213 Prodigy?

The Logitech G213 Prodigy isn’t the ultimate gaming keyboard then. But for less than £60, you’re getting seriously good value for money, with full RGB backlighting, software customisation and responsive Mech-Dome switches.

For those after mechanical switches, I’d suggest the Corsair K63 at only a small amount more, for the best gaming experience possible. However, on discovering you’ll be dropping down to ten fewer keys and losing RGB backlighting too, you’ll appreciate just how brilliant value the Logitech G213 Prodigy really is.

A budget gaming keyboard that offers spectacular value for money.