Logitech is one of the most prominent peripheral brands in the world and certainly my first port of call when considering a new mouse or keyboard. Almost all of the high-end machines that come through our labs seem to get bundled with Logitech gear, which is a pretty good indication of quality.


The Logitech G15 gaming keyboard, is much more than “just a keyboard”. 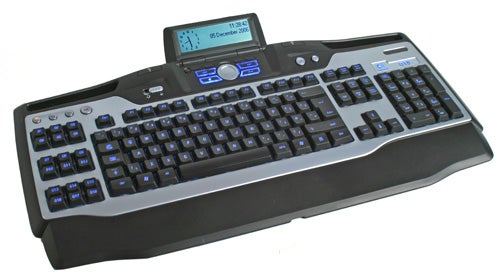 It’s quite big, due to the extended set of keys on the left (more on that later). All of the keys are actually transparent, and then painted in black, leaving the characters transparent, so the light from the blue LEDs underneath shines through, like Saitek first did with its Eclipse keyboard last year. However, it suffers from the same problem as the Saitek in that when you reboot your PC the keyboard light defaults to on. I generally only need the light on when I’m gaming in the dark, so I would have preferred a setting to do this.


The action on the keys was pleasant – no complaints here. It felt fine for gaming and the angle of the keyboard was good. However, when it came to typing, I struggled immensely. I’ve been using the Enermax Aurora at work, and a Microsoft Multimedia keyboard at home and not had any issues transitioning. However, with this, I found myself constantly pressing the wrong keys, and shifting my words entirely over by one letter. The keys look slightly smaller and densely packed than say the Enermax, perhaps as a space saving measure.


After typing for a while on it, I have started to get used to it – but I’ve never had this much trouble adapting to a keyboard. I also found I was getting pain in a finger I don’t usually get pain in. Related? Possibly. But then I do tend to abuse my hands somewhat riding mountain bike trials. So who knows what is to blame.


One reason this keyboard is really cool for gaming, is there is a switch for turning off the Windows keys. When playing a game, accidentally pressing the start menu key is incredibly annoying – on slower machines, it can be enough to crash the game! 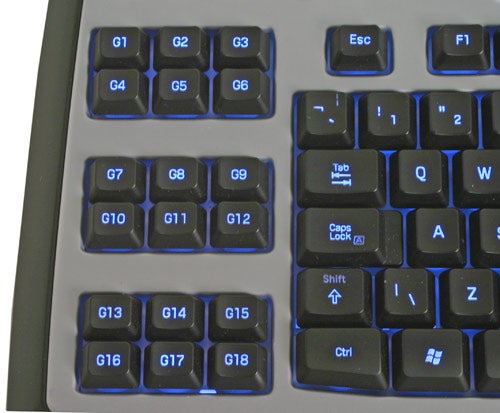 On the left hand side of the keyboard, are 18 custom, programmable keys. These are programmable to perform both simple and complex keystrokes. This can be great for certain games, where assigning a few repetitive keystrokes to a single button can really save time. Above the keys, you can choose what bank of macros you are using. For instance, you could have different macros for different games or applications giving a total of 54 programmable keys.


Recording a macro is pretty smartly done, as you don’t need to code or use special software. It’s done there and then inside your application. Just press the record button, select the button to assign a macro to and then perform your key strokes.


A limitation of this system, over something like AutoHotKey, is that it can’t record mouse movements. However, there is almost always a keyboard shortcut for most things you want to do with a mouse anyway. You can choose to record natural pauses, or leave them out for speedy macros. However, this seemed to be a global option and it would have been nice to be able to change this setting on a per macro basis.


As a warning, there have been cases of people being banned from World of Warcraft for using G15 macros.

On the right, you can see the mute button, as well as a button for adjusting the light setting. This is either off, medium or high. It adjusts the level of the LEDs under the keys, and the LCD screen.


The multimedia keys can control most of the popular media players such as Windows Media Player, iTunes and Winamp. The volume control adjust the overall system volume rather than the volume of your media program. That means it will bring down the volume of games as well.


What makes this keyboard truly unique, is the 4in by 1in LCD display. This is 160 by 43 pixels, and can fit up to 26 characters per line. By default, the supplied software will display general system information, new e-mails, the date and the time. CPU utilisation and memory usage was also quite cool and I was impressed that it showed independent utilisation of all four cores in our Kentsfield test rig.


However, there is a whole community of G15 owners, and a full SDK for programming add ons for the LCD screen. A cursory glance bought up visualization plugins, and RSS readers. If your coding is limited, you can even use LCD Studio.


Some games support the G15 natively (while others require patches), and will then display information such as ammo and health on the screen. I personally think this is a little useless, as this is displayed on the screen anyway. I’d sooner be told things I didn’t know, such as if someone has sent me an MSN message, or if I have a new e-mail.


One thing I did like, was that you can skip music tracks while in game, and the LCD screen will display the track information on the screen. It’s like having an MP3 at your finger tips.


In Linux, the G15 works only as a basic keyboard, but none of the extra functions work as these require the Logitech drivers. However, there is 3rd party software available. I have also heard of success when using the WINE wrapper. 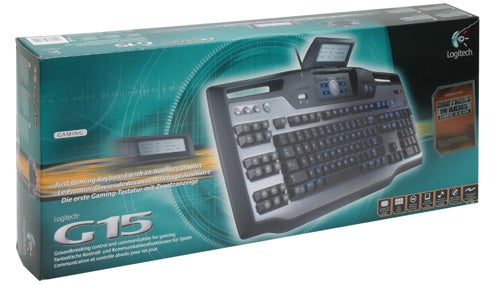 There are two USB 1.1 ports included in the keyboard, for plugging in flash drives and the like. However, because these are 1.1 and not 2.0, speed will be significantly lower and severely limit what you can connect to the ports. This is really the biggest failing on the G15.


Despite my problems typing on this keyboard – which I’m sure is temporary as I’ve improved a lot already – I do really like it. The ability to switch off the Windows keys is a godsend to any gamer. The multimedia keys are useful, but really shine when in conjunction with the LCD panel, which displays the track and artist.


The plethora of add-ons available will keep you busy, and if you can do some mild programming you’ll have fun creating your own. The lack of Linux support is not a huge issue as it’s not exactly a gaming OS. However, I believe the appeal of this keyboard extends beyond that of the gamer, as the macros and LCD panel can become very handy for several situations.