Logitech is well known for its PC gaming peripherals, and with reason: the ones that have passed through TR, like the G9 Laser Mouse, have consistently won awards. Over the years, the company has provided an extensive range including joypads and joysticks, steering wheels, gaming keyboards and mice. The one surprising omission from its lineup has always been gaming keypads along the lines of the Saitek’s Cyborg Command Unit or Belkin/Razer’s N52te, but now Logitech is looking to rectify this omission with its new G13 Advanced Gameboard. 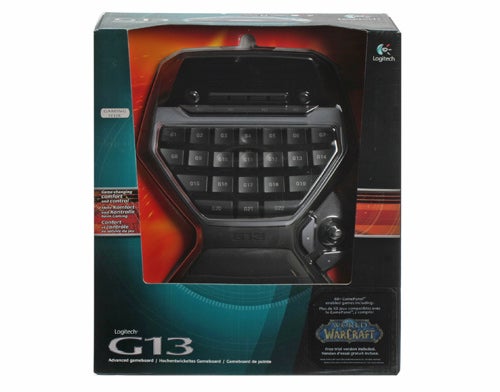 For those of you new to the idea of a gaming keypad, or Gameboard as Logitech prefers to call it, it’s essentially a small custom keypad (akin to a keyboard’s number pad) with programmable keys and usually with an analogue joystick thrown in, all within easy reach without requiring you to move your hand from the built-in wrist rest.


Logitech has stuck to this basic formula, but added much that makes the G13 stand out. Touches like backlighting that can be any colour of the rainbow and a fully programmable LCD display as found on the company’s gaming keyboards appear to give the G13 a definite edge over its well-established rivals. However, like with so many technology products that don’t have a defined set of properties, it’s surprising how often manufacturers get it wrong. So let’s see if the G13 is the one to beat them all. 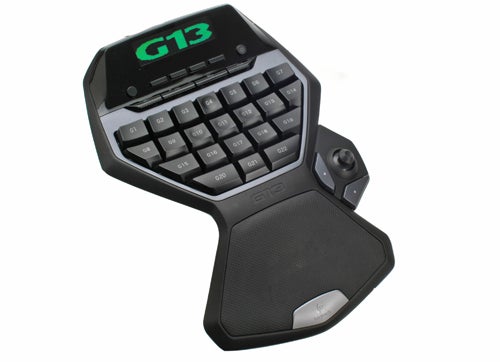 The first things that you might notice about the G13 are its size and weight. At 650g, this is no lightweight, and combined with its broad rubber feet means it sits very solidly on your desk. It also takes up more room than most, measuring 24cm top to bottom. Build quality is excellent throughout: the G13 feels like it could take any abuse a heated gaming session might inspire you to lavish on it.


The design is very attractive with elegant and sharp lines, with its mostly black, matte finish avoiding the garishness that occasionally afflicts gaming peripherals. Overall, it gives a sense of luxury few peripherals can match. The comfortably-sloped wrist rest is padded with a soft rubbery material which provides excellent grip, though if we’re being incredibly picky for those with bigger hands the ‘slippery’ silver Logitech inset is not placed ideally.

Just above the G13’s padded wrist-rest to the right is a small stick like you might find on a joypad, with two large grey buttons for your thumb just beside it. Unfortunately the stick is only a four-way affair rather than the full analog eight-way model you’ll find on a joypad, and thus more limited in its use. This is an even greater shame considering Saitek’s Cyborg Command Unit, which has been on the market for a while now, offers a full analog thumb stick that can even be mapped to act as a mouse. 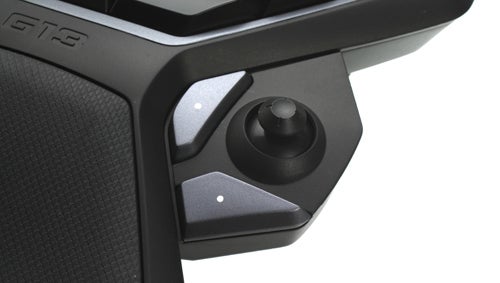 Since the G13 is otherwise symmetrical, it’s also a pity Logitech did not make the small section with the stick and two thumb-buttons attachable to either side (similarly to the number-pad on Microsoft’s ingenious SideWinder X6 Keyboard), which would have made its G13 the only ambidextrous game keypad on the market aside from the Zboard Fang. It’s worth noting though that if the functionality of this section is not required, the G13 is perfectly comfortable for left-handed use.


Above the wrist-rest is a selection of 22 keyboard-like keys labeled G1 to G22. In the top two rows, four buttons with indents act as the WASD buttons by default. The rest of the buttons are arranged so as to be easily accessible by moving from these or for either thumb or pinky finger. Just above the G-keys are a set of M-keys. The first three of these switch between configurations, while the fourth one (labeled MR) allows you to record keyboard macros and assign them to any G-key in real-time. 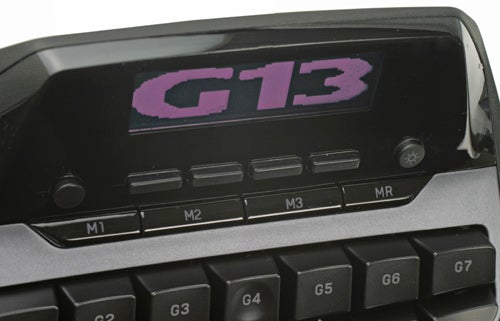 At the peripheral’s top we have what differentiates it most from other gamepads: an LCD screen (referred to as a GamePanel by Logitech) with its own set of controls below it. These consist of five small but easy-to-use rubberized buttons. The first, a small round button to the left, acts as a switch between the screen’s various functions. The next four are a set of rectangular context-sensitive buttons below the screen whose functions vary depending on what the GamePanel is displaying. 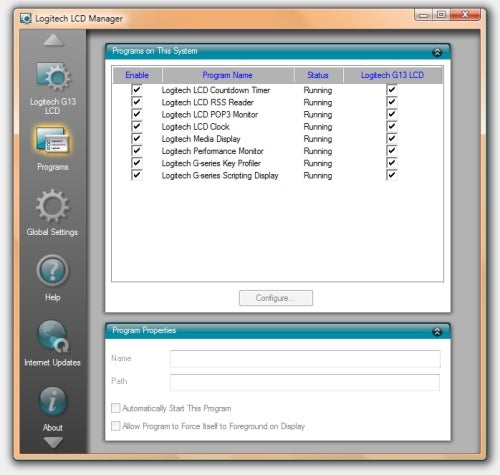 With the GamePanel set to ‘CountDown Timer’ mode, for example, they allow you to stop/start or reset a pre-configurable stopwatch and countdown. On the ‘RSS Reader’ setting, they let you switch between feeds, call up a summary or open the original article with your browser. Other (non-interactive) functions of the GamePanel LCD include monitoring CPU and RAM usage, a date/clock and new email display and key profiling/scripting. These functions are fully configurable through Logitech LCD Manager, and further ones might be added in the future through software updates.

Last but not least as far as buttons go is a small one to the right of the GamePanel controls with a sun as its icon, which switches the G13’s backlighting on or off. Though most gaming keypads on the market offer some form of backlighting, none can match Logitech’s implementation. Using the supplied software, the G1 to G22 keys, backlight control button and GamePanel can be lit in any colour you like, and made just as bright or dim as you want. The only exception are the M-keys, which are always backlit and only in red. 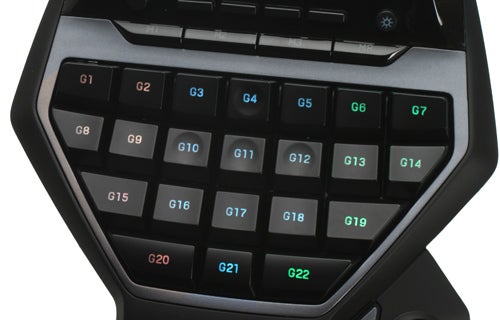 (centre)The G-keys can’t actually display various colours simultaneously; this is just a merged shot to show some of the hundreds of shades available(/centre)


So far, Logitech’s G13 Advanced Gameboard seems to be holding up pretty well. Quite aside from the luxury look and feel, LCD screen and multicoloured backlighting, for those wanting lots of buttons there simply is no other choice. The four directions of the thumb-stick each act as a programmable key and the stick itself can be pressed down, which combined with the two thumb buttons and 22 G-keys gives the G13 29 fully programmable keys as is. Add in the M1 to M3 toggles and this number goes up to a staggering 87 keys for any single game or application. 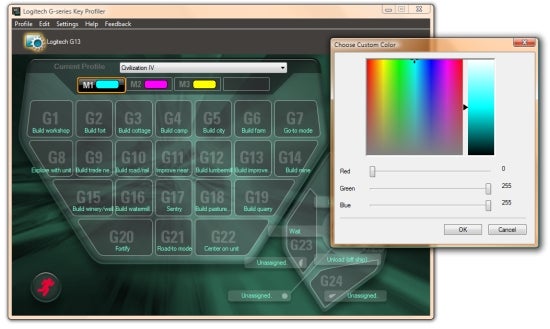 (centre)Here you can see the backlighting control, and yes, it really does do all those colours(/centre)


As usual with Logitech, the software is also rather good, though it could use improvement in some key areas. The basic interface of the ‘G-series Key Profiler’, which controls everything but the GamePanel, is both attractive and well laid out. Offering a visual representation of the G13 where a click on any of its virtual keys brings up a menu with various options, matching keyboard-keys, scripts or macros to each of them couldn’t be simpler. 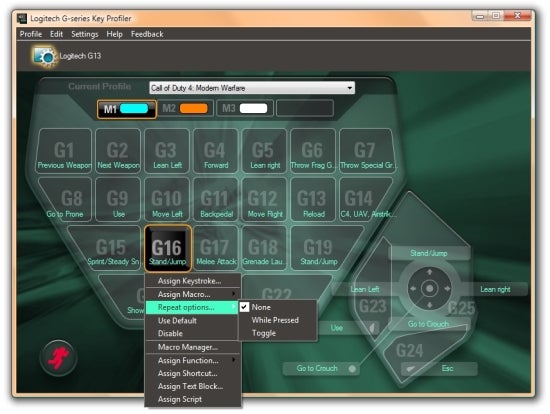 Unfortunately the same can’t be said for the menu bar controlling profiles, which can be a little confusing and feels more haphazard. Also, Logitech offers just a single default profile geared towards FPS games. While the Key Profiler will download custom profiles for many popular games automatically, there are titles it does not recognize. Worst of all, it only allows access to profiles for which you have the actual games installed. As it doesn’t offer default profiles for various gaming genres, Logitech should have at least allowed you to get profiles for games you don’t own that might have similar control systems to games it doesn’t recognize.

With all that out of the way, how does the G13 actually perform? Its moulded shape is comfortable for extended periods of time, and though initially stretching my thumb to fully cover the stick was painful, after an hour of play it was no longer an issue. Buttons also felt nice and crisp, with the only complaint about response being that pressing down on the thumb-stick is a little too stiff. Playing some RPGs and RTSs presented no problem, basically because in these cases all you really need the pad for is as a button repository. 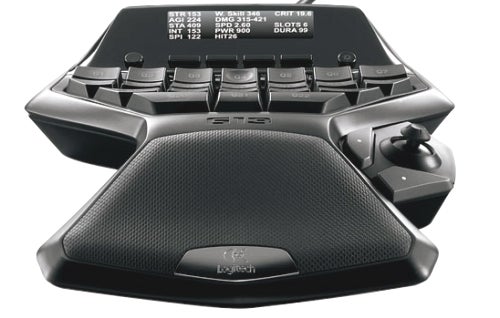 In Call of Duty 4 though, because of the way the G-keys are all packed together rather than the more staggered and divided layout of, say, the Cyborg Command Unit, I frequently found myself pressing the wrong key in a hectic firefight. This did become less frequent over an extended period, but overall my good old keyboard simply felt more comfortable. Only once I started using the thumb-stick for things like leaning, jumping and crouching did I find the G13 offering unique advantages compared to a keyboard and overall more intuitive to use.


Also, though it’s not an issue in COD4 where you can only carry two weapons at a time, in other FPS games having no ‘number’ keys above the G-equivalents of WASD is rather limiting and sometimes downright frustrating.


Overall then, the G13 Advanced Gameboard would have been a better product if Logitech had copied Saitek’s gamepad in two things: a real analog thumb-stick (preferably switchable to digital mode to become a four-way button pad when required) and a row of usable gaming keys above the indented WASD ones. However, these complaints are minor compared to the overall experience, which as with most Logitech peripherals is very good.

Interestingly, the G13 is also incredibly handy in certain productivity scenarios. Used in conjunction with a graphics tablet, for example, its macro functionality and flexibility combined with a small footprint (compared to a full keyboard) make it a useful tool. Even in addition to a normal keyboard, it’s highly recommended for anyone who uses lots of complex shortcuts or regularly performs actions requiring repeated sets of key-presses.


Generally available for around £60 online, the G13 is the most expensive gaming keypad out there by a considerable margin, but justifies the premium with a whole load of exclusive features and excellent build quality.


While not quite the consummate marvel we had hoped for, despite its flaws Logitech’s G13 Advanced Gameboard is the most desirable gaming keypad on the market and justifies its high price with features like a programmable LCD screen and backlighting in any colour you could want. We can’t wait to see how the inevitable sequel turns out.