The mark of a good keyboard – like a good butler – is that you shouldn’t notice its presence. It may be the main intermediary between PC and user, but generally it’s only when something goes awry that a keyboard gets noticed – often right before being thrown across the room. 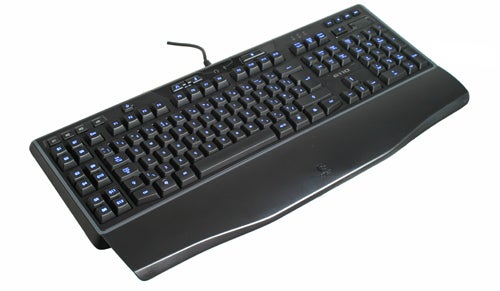 Logitech has a good history of producing keyboards that aid, rather than hinder, frustration-free interaction with one’s computer. I used a G15 for several years before finally upgrading to a Microsoft SideWinder X6, after it suffered an untimely death at the hands of a cup of coffee. I still regard the G15 as one of the finest keyboards I’ve ever used and the G110 follows in its footsteps admirably.


The design is unsurprisingly reminiscent of the G19, sans both the LCD display and the utterly ludicrous price. Logitech is asking £69.99 for the G110, a more reasonable proposition that the G19’s £150-odd MSRP, even if not exactly cheap.

The G110 packs its fair share of features. There’s a USB port on the back, but more interesting are the microphone and headphone inputs. The G110 includes built-in USB audio processing, letting you hook up a set of headphones and a microphone (or a combined headset, of course) without the need for a soundcard.


I’m not entirely convinced this is a particularly worthwhile addition. The quality seemed as good as the Realtek chip on my motherboard, but that comparison betrays the flaw: most PCs already have audio processing. It’s only potential benefits are in bypassing integrated audio that’s of particularly poor quality, but this is an increasingly rare problem these days. Unless you have a specific need for it, then it’s hard to justify the cost. 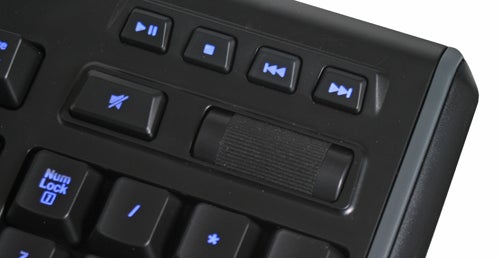 Of greater use are the G110’s built-in macro and multimedia keys. On the far upper right sit play/pause, stop, forwards and back buttons, with a mute button and a volume wheel placed beneath them. Leftwards from this is a toggle for the keyboard’s backlight so you can turn it off when you’re watching a movie, for example, and farther left are separate mute buttons for attached headphones and microphones. 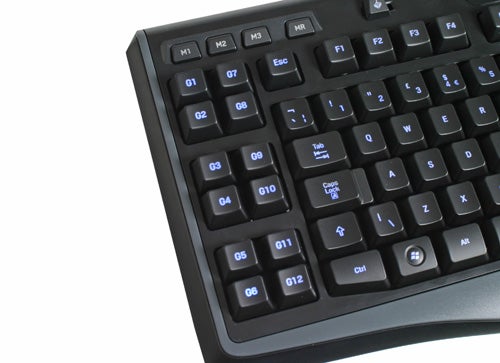 Even more left-wise there’s a switch for disabling the Windows and right-click menu buttons, so as to avoid frustrating minimising of games. Finally, to the left of the main keyboard, are macro keys (G-keys) above which sit the three M-keys that enable you to switch between different macro key profiles.

The combination of three M- and 12 G-keys means that you shouldn’t suffer any lack of customizable buttons. In all likelihood those three M-keys will end up assigned to different games – M1 for Team Fortress 2, M2 for Bad Company 2, M3 for Modern Warfare 2, in my case.

Usefully, the G110’s configuration utility lets you set a different backlight colour – that can be made by mixing red and blue – for each of these keys, just so you can be sure which is activated at a given point. Also useful if you tend to attach the same peripherals to multiple computers frequently (and who doesn’t?), profile settings are stored on the G110, so you can take your preferences with you to a mate’s house, or LAN centre, should you be so inclined.


The supplied wrist wrest attaches and detaches easily enough and extrudes far enough to actually be of use. It’s ultimately just a piece of plastic, though, so it’s not the most comfortable thing to slump your lower arm on for long periods of time. If you need a wrest, you’re better off buying a decent ergonomic one as it’ll be better for you in the long run.

On the subject of comfort, it must be said that the G110’s keys have an excellent action. The travel is fairly deep, and slightly cushioned, encouraging firm strikes. It’s reminiscent of using a typewriter, with all the brilliantly solid feedback that entails – I definitely like it. Admittedly if you’re bit of a pansy, or you’ve become used to typing on a particularly shallow keyboard, the firmness required to ensure key presses are registered could take a bit of getting used to, but I’ve no complaints.


A tactile feel is always welcome in games. There’s nothing more frustrating than feeling that your out-of-game equipment is ruining your in-game performance but alas with the G110 my seeming inability to be anything but terrible at Bad Company 2 can’t be blamed on this keyboard. Spending £70 on a G110 isn’t going to make you a better gamer, but it won’t make you worse – a criticism I reserve for the horrible Razer Lycosa.


The Logitech G110 may be stripped down versus the G19, but it doesn’t eschew the gimmicks, namely its USB audio processing, entirely, no doubt contributing to its hard-to-ignore £70 price tag. Nonetheless, the sturdy build quality and great tactile feel make that a worthwhile investment.