The Logitech G Pro X Wireless offer great battery life, a seamless wireless connection, as well as rather good and well-balanced audio. It’s a shame then that such a great package is marred by a high price, a budget-sounding microphone and a lack of Bluetooth. But if you have the money to burn and are looking for a reliable headset, then the G Pro X Wireless is likely to fulfil most of your needs.

The Logitech G Pro X Wireless cuts the cord on one of the firm’s most incredible value-for-money headsets, bringing it to those yearning for a little more freedom.

Being wireless, the headset now boasts features such as a 20-hour battery life and Logitech’s infamous Lightspeed wireless connection, which has revolutionised other products such as the fantastic G502 mouse and the G915 keyboard.

Combine this with the established Hybrid Mesh Pro-G 50mm drivers, and a comfy mix of leatherette ear cups and a solid metal frame, and Logitech is hoping the Pro X Wireless can become one of the best gaming headsets on the market.

The Logitech G Pro X Wireless are currently available from a multitude of retailers including Logitech’s own website, with the headset retailing for £189.99/$199.99/€199.00.

It is possible to pick up the older, wired variant online, too – although, priced at £109.99/$129.99/€129.00, it was out of stock at the time of writing. Therefore, in order to justify the steep price increase for going cordless, you really do need to make the most out of the wireless convenience when purchasing the Logitech Pro X Wireless.

From looks alone, it’s clear the G Pro X Wireless is a high-end headset. It’s presented in a nice mix of metal and faux leather, designed to give off the vibe that it’s worth the rather hefty outlay as a result of its looks alone.

There’s no doubt the overall build of the G Pro X Wireless is robust, and that the combination of hard, matte plastic and metal in its construction means that you’ll struggle to find many better-looking headphones out there.

I’m only reminded that this is a headset for gamers by mention of the word Pro on the box art; there’s nothing overtly flashy here. The G Pro X Wireless wouldn’t look out of place on the head of a pilot – it sports a certain understated look to that other headsets simply don’t have. 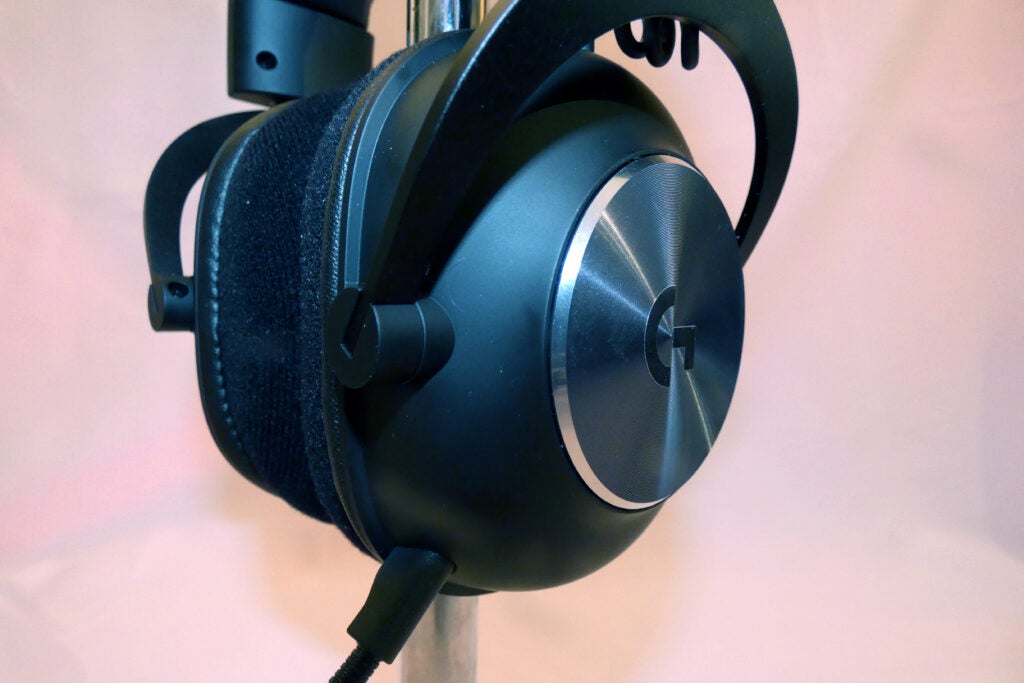 One of the first major things to note about the Logitech G Pro X Wireless is the sheer volume of padding both around the headband and ear cups. The comfortable cushions fit snugly around my head, ensuring good passive noise isolation. However, I did notice that the headset is quite stiff. There’s little flexibility to the headband, making it difficult to take the G Pro X Wireless off your head.

Logitech has opted for a detachable microphone, so it’s easy to move it away from your face when swigging a drink, for example. In addition, by removing the mic I was able to use the G Pro X Wireless as just a solitary pair of headphones. Build quality was good in this regard, too. I welcome its flexibility, which marks a change from some of the more stiff microphones I’ve dealt with in the past.

The most noteworthy change with this headset is that Logitech has cut the cord in favour of a wireless approach. The only cable in the box is a 1.8m Type-C, for charging purposes. For wired junkies, I’m sorry to say there isn’t a traditional cable present for using the G Pro X Wireless with devices featuring a 3.5mm jack.

Audio and performance – Good audio on the devices it works with

Overall audio performance is striking, with a great sense of the position of audio, even without any software-assisted surround sound. There’s nothing too overpowering about the G Pro X Wireless’ sound, and it’s decent overall and remarkably balanced. This can be attributed to the fact that the G Pro X Wireless makes use of Hybrid mesh Pro-G 50mm drivers in order to get that “big” sound that gamers so often crave.

Playing games such as CS:GO, which relies on knowing where enemies are in relation to your own position, the G Pro X Wireless’ excellent sound-staging was a huge help, significantly improving my game. When listening to music such as Rush’s 2112 album, the G Pro X Wireless greatly excelled in picking out the little intricacies the song throws up, all with a rather punchy bass. As software goes, Logitech has often smashed competitors such as Razer and HP out of the park, both for its intuitive software design and clever functionality – and this is just as true with the G Pro X Wireless. The integration between both the headset itself and G Hub is seamless; it was picked up as soon as the headset was plugged in.

Inside G Hub, it’s possible to make use of Logitech’s simulated surround-sound integration with DTS Headphone:X 2.0, which goes beyond the 7.1 channels with which people are more traditionally acquainted. Surround sound provided me with a better sense of the positioning of certain objects, although this was only true for playing games. For listening to music with the surround sound enabled, it muffled the audio, especially at the lower end with a more saturated bass.

However, since the headset doesn’t feature any form of traditional wired option or Bluetooth support, it can only connect to a device via the bundled 2.4GHz Lightspeed receiver. This limits the supported devices to those that feature a USB-A port, ruling out my 2020 MacBook Pro (at least without an adaptor), for example.

Fortunately, it should work with with any PC with a spare USB-A port, a Switch (in docked mode) and PS5. Through the period of testing, I couldn’t get the G Pro X Wireless to work with my Xbox Series X, no matter the port I used.

Battery life lived up to its billing, however. The G Pro X Wireless lasted exactly the 20 hours Logitech claimed before the battery died.

For the G Pro X Wireless, Logitech has gone for a cardioid microphone, which is the case with the majority of headsets. This means that sound from the front is far more prominent than sound from the back and sides. This notion of sound at the front being the most important is reinforced by the fact it’s unidirectional (one direction), as opposed to omnidirectional (multiple directions).

Straight out the box it sounds okay, but it isn’t as clear or sharp as the headset’s high price would have you believe. To my ears, it sounded a tad compressed and a little thin. However, with some adjustments it can be made to sound better. 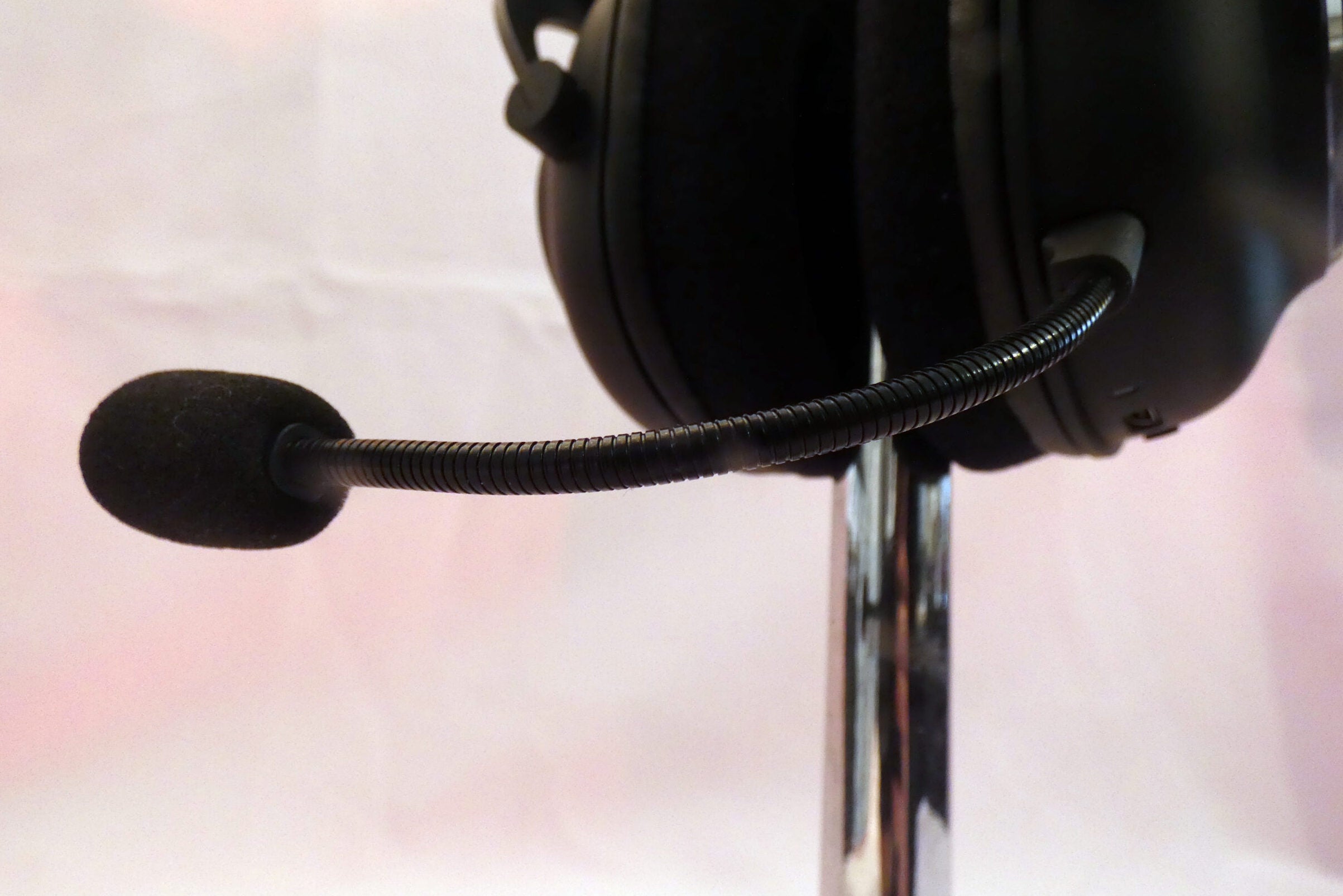 Thanks to the combo of G Hub and Blue Vo!ce integration, it’s possible to tweak the microphone’s performance by adding real-time voice filters to reduce background noise, balance volume levels and make your voice more prominent over the in-game explosions and gunfire.

You’re even provided a myriad of presets that can be used to replicate the settings enlisted by some of the eSports pros, while also trying to make the G Pro X Wireless sound like a standalone microphone. However, if you’re someone that’s looking to get into proper streaming or broadcasting, then I recommend you spend the near-£200 fee on a dedicated microphone, be it XLR or USB, instead.