An excellent mechnical gaming keyboard for work and play, particularly if you are short on space or will use it in more than one room. You will find cheaper alternatives online, some with genuine Cherry switches. Still, I’m not sure there’s a classier-looking mechanical keyboard that also has a broad array of game-centric features.

While it does not have a NUM pad or a set of dedicated macro buttons, the Logitech G Pro’s key feel is great, and the quality of its RGB backlighting is unbeatable.

But with a pretty high price for a wired gaming keyboard, is the Logitech G Pro a decent buy in an oversaturated market? 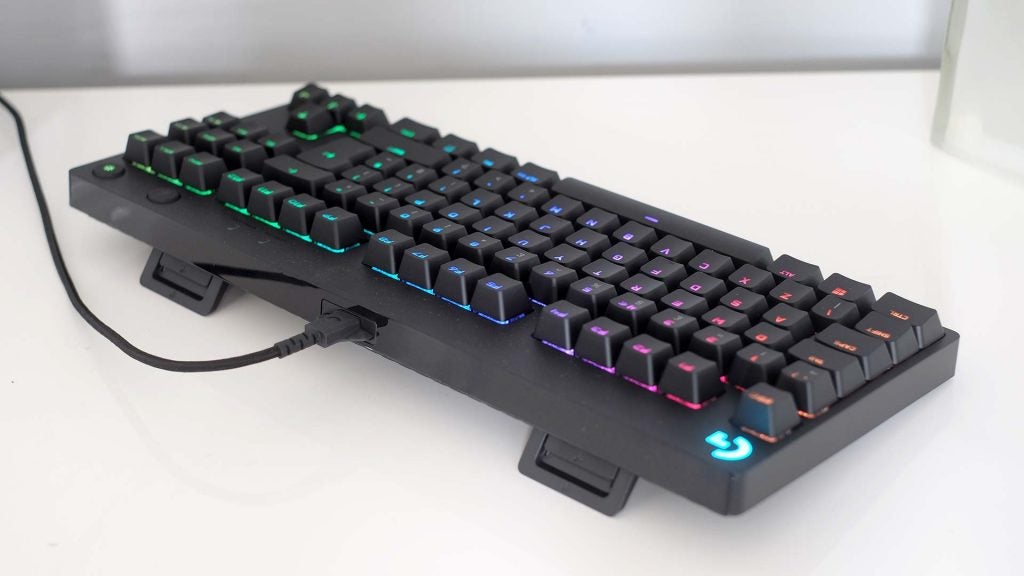 The Logitech G Pro is a “tenless” keyboard. This means it does not have a NUM pad, so its footprint is far smaller than a full-size one.

Talk of esports might make you think of a pro gamer stashing a Logitech G Pro into their bag, alongside a favourite mouse, to tournaments, but there are other potential benefits for a smaller keyboard like this.

For work, I use the Logitech G Pro on an Ergotron WorkFit standing desk. It has a keyboard tray that can barely fit the SteelSeries Aper M800 I used before the Logitech arrived. 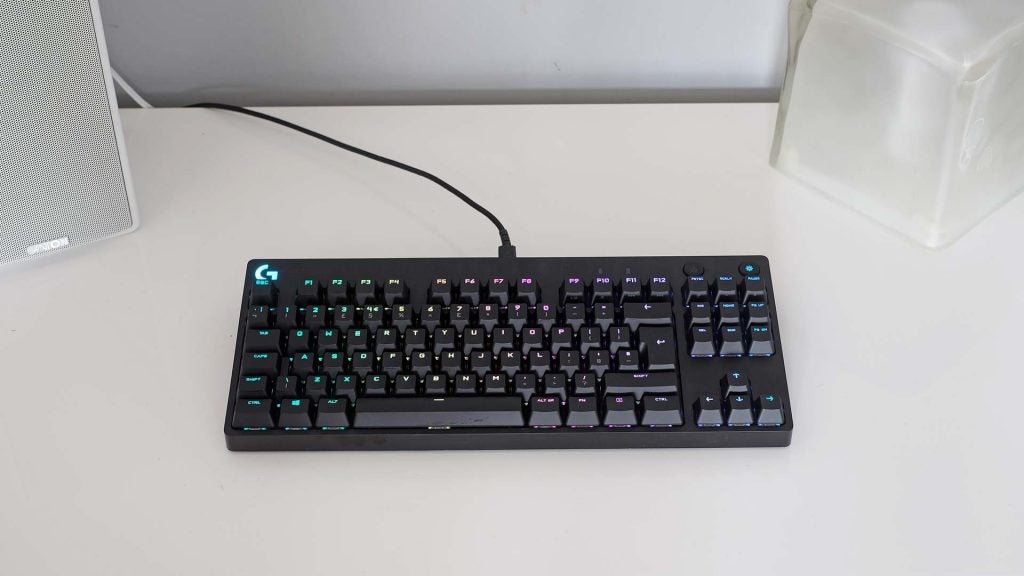 The Logitech G Pro is also perfect for the living room gaming setup I use, a DIY equivalent of the Couchmaster Cycon. Small keyboards are convenient when you are not dealing with a full-size desk.

Logitech has also made an important tweak for those who will stash and dash. The G Pro’s microUSB connector is removable, to avoid cable stress damage when carried around in a bag. It also uses stabilisers to avoid connector wobble. My first mechanical keyboard, a Cherry MX-Board 3.0, died of USB socket failure, so this extra protection is welcome.

There’s no palm rest, though. The keyboard’s end is abrupt. But you can set it at three angles for comfort: flat, or with 4/8 degrees of upward tilt. 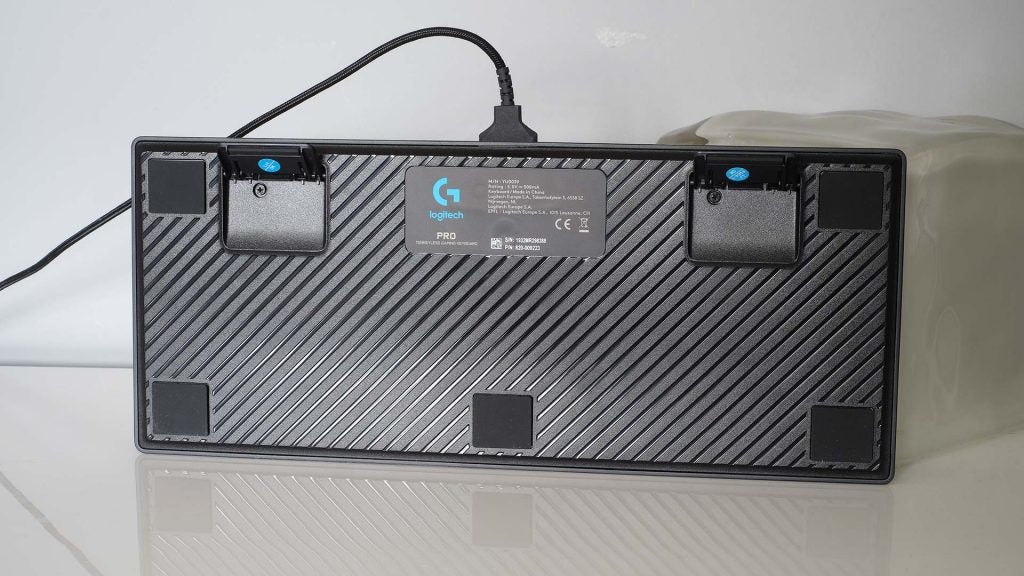 Dig deep enough into the keyboard community, and you’ll see Logitech keyboards criticised for their use of “cheap” plastics. This does not ring true using the G Pro.

Its surround is matt plastic, but there’s zero flex to it. And the insides of the keyboard are mounted on a plate of steel for rigidity.

The Logitech G Pro is also a great-looking keyboard. It’s minimal, and the key font has just a slightly bolder, more aggressive character than the all-business Filco Majestouch-2. The RGB backlight is the real star here, and the reason the bold keycap font works. But more on that later. 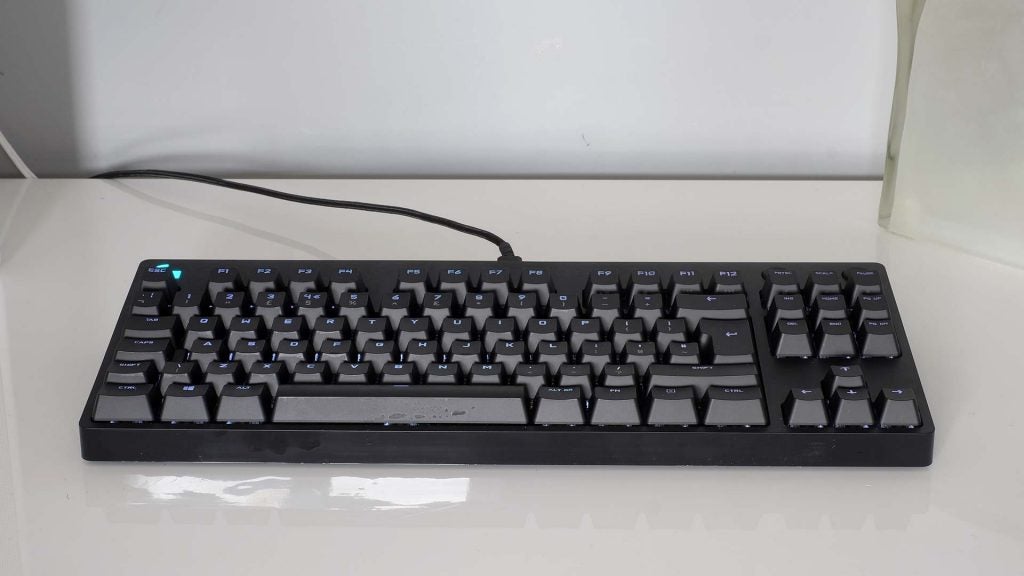 The Logitech G Pro uses GX Blue Clicky switches. These are a Logitech alternative to Cherry MX Blue, an industry-standard mechanical switch, alongside the MX Red and MX Brown. And they are a little different to the Romer-G switches the very first G Pro keyboard used.

What’s the difference between GX Blue Clicky and MX Blue? Not much. Both have distinct clicky feedback at the key actuation point, 4mm total travel and require around 60 centinewtons operating force. The GX Blue’s activation point is a little higher, which some might say makes it a “faster” key. But we’re dealing in fractions of a millimetre here.

This is more-or-less a copy of the MX Blue, one made in association with collaboration with Kailh. It is one of the best mechanical switch makers, aside from Cherry itself. But, yes, you can call these keys Cherry MX copies if you like. 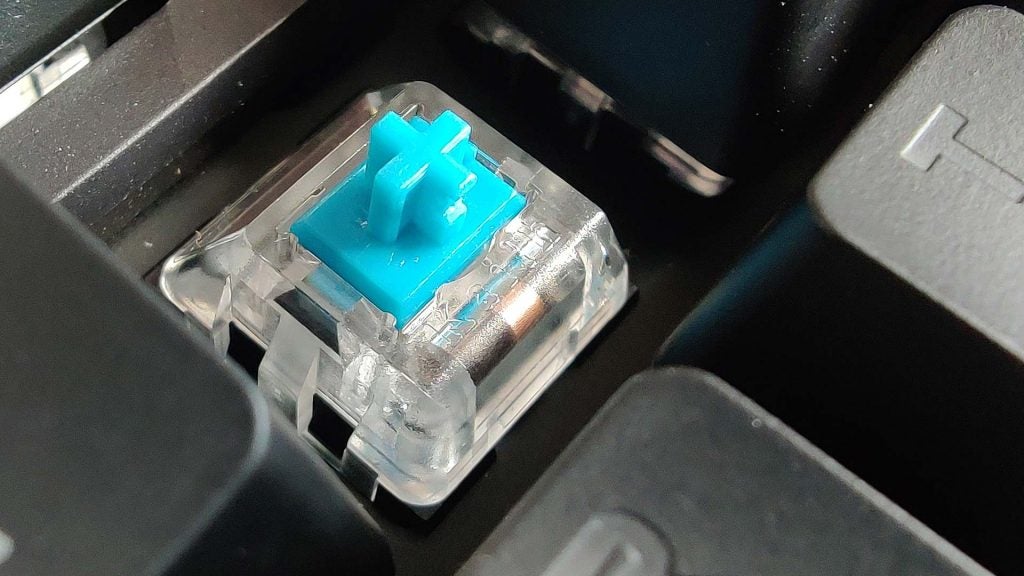 I have used the Logitech G Pro for typing more than gaming – as it has been my work keyboard for the past few weeks – and it feels fantastic. The distinct click offers more satisfying typing than either the Cherry MX Red or SteelSeries QS1 keyboards I used as references.

The Cherry MX switches do feel a little smoother after the actuation click, but the Logitech G Pro still has the feel of a high-quality mechanical keyboard.

Noise may be a hurdle for some of you, though. Linear, non-clicky keys like an MX Silent Red or Logitech’s own Romer-G switches are much quieter. The G Pro has the characteristic clack of a mechanical keyboard, which may get annoying if you tend to play games with speakers at a lower volume.

That said, I prefer the feel of these keys to those without a tactile click.

Logitech also offers a way to get both. Buy the Logitech G Pro X, rather than the G Pro, and the switches are removable. You can then swap the standard GX Blues for softer GX Brown or smooth GX Red switches. Additional sets are £42.99 apiece. But if you want to go that deep, you may well also want Cherry MX switches, not these lookalikes.

LED light implementation is one of the best reasons to stick with Logitech. There’s an RGB LED under each key, and the cap design minimises the spill of light between the keys, keeping the colour to the translucent numerals. RGB gaming hardware does not often look all that classy. The Logitech G Pro does.

You can also turn the backlight on and off with a press of the button in the top-right corner. 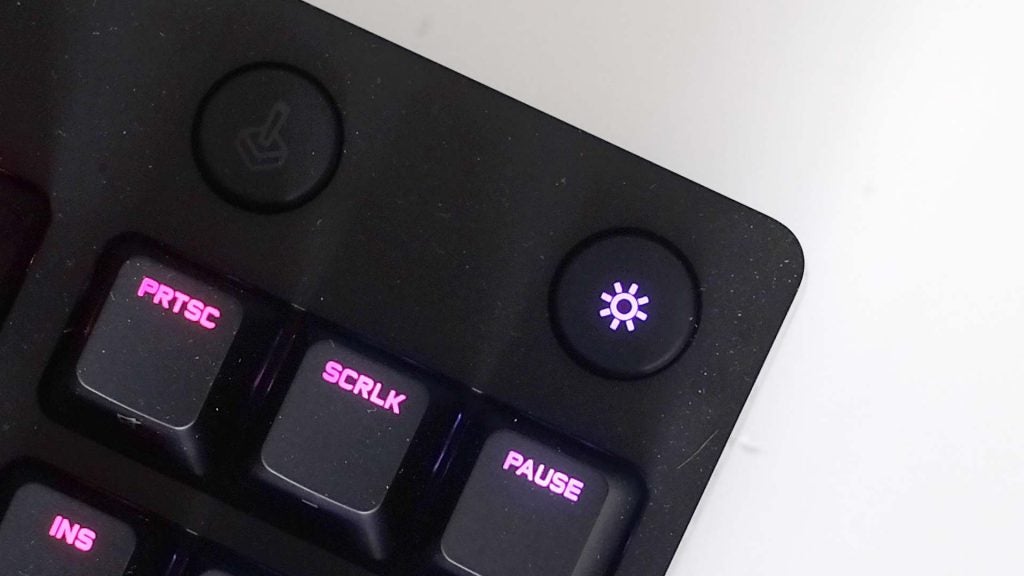 RGB customisation is superb. An app called G Hub lets you change the lights’ behaviour. You can choose any colour for a static glow, select a different colour for each key, or experiemnt with a handful of animated colour transitions – you can even create your own.

These let you get pretty creative, transitioning between scenes you “paint” on the keyboard. You can choose the speed of animations too, both pre-made and custom, to avoid the distraction of erratic backlight behaviour.

You won’t find a better execution of a keyboard backlight, with one small caveat. As each key uses little red, green and blue lights, a pure white setting does not look anywhere near as pure, clean or white as a non-RGB LED keyboard. White looks blueish.

The G Hub app also lets you set macros. But how does a macro work without any macro buttons? The G Pro uses the F-keys instead. Strings of macro commands can be manually tapped in sequences of keystrokes, and you can use them to launch applications or to fire off actions like muting your mic or start screen recording.

Sets of macros can be tied to a specific game too, so the G Pro will behave normally when you’re just hanging around in Windows 10.

Logitech fits a lot of customisation into a keyboard without any buttons made for the job. There’s also a Game Mode, which is something I’m far more likely to use as someone who dips in and out of games. This disables certain keys to avoid, for example, hitting the Windows key and accidentally setting off a shortcut. You choose which keys are disabled, and the Game Mode button sits beside the backlight one.

The Logitech G Pro is a great keyboard for anyone who won’t mind that it does not use Cherry MX series switches. Its feel is not all that far removed from an MX Blue keyboard, with clicky-clack key feel and sound, for better and worse.

It feels fast, is superb for typing, and several elements (specific to this keyboard and Logitech boards in general) are great. A smaller Tenless design is better if the keyboard won’t spend its life rooted to one large desk, and both the look and customisation of the G Pro’s backlight are terrific.

You will find cheaper alternatives online, some with genuine Cherry switches. Still, I’m not sure there’s a classier-looking mechanical keyboard that also has a broad array of game-centric features.