What is the Logitech FabricSkin Keyboard Folio?

As if to alleviate any doubt, Logitech seems determined to answer this question in full using just the name. As its title suggests this a folio case with a keyboard, while the ‘FabricSkin’ part refers to how the keyboard and outer shell are splashproof. It’s Logitech’s second attempt at such a case and it doesn’t come cheap at £119, but it has a lot of plusses if you can overlook the price. 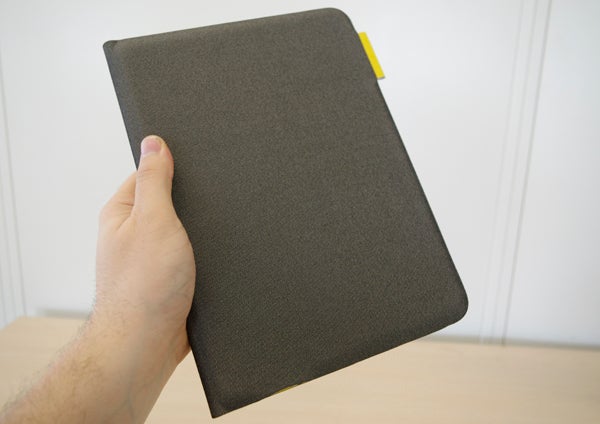 This version is a serious step up from the original FabricSkin Keyboard Folio. It still protects the front and rear of the iPad, but this version trades the soft touch material of the original for a hardier, more satisfying textile material over a hard plastic shell.

The combination gives the FabricSkin Keyboard Portfolio a more tactile feel, but just as important it’s thinner and lighter than before. The old version, admittedly using a heavier iPad, weighed in comfortably over 1kg combined. An iPad Air and this Folio, however, are a more manageable 880g. It’s a still a fair bit heavier than an iPad Air on its own, but it’s far more in line with Logitech’s popular Ultrathin Keyboard Cover for iPad Air than before. 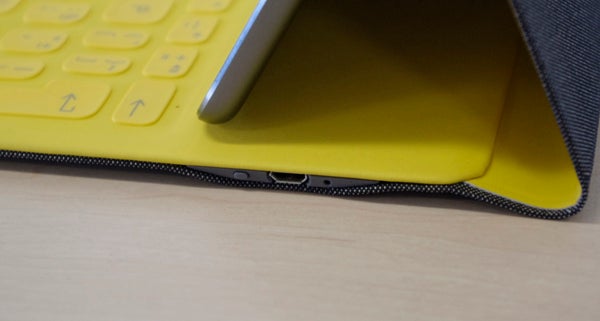 This makes the FabricSkin a far more viable solution for anyone who wants a Folio-style keyboard and case in one, but doesn’t want to sacrifice too much portability. It helps, too, that in this incarnation the FabricSkin Keyboard Folio looks very classy. The textile exterior looks far more professional and smart, while the choice of either a white or a (rather fetching to our eyes) yellow interior gives you a little choice.

All these improvements are great and the Folio’s best feature remains: the magnetic clasp. This holds the iPad in place when in typing mode, with the Bluetooth connection automatically engaging (or disengaging) when its activated. It’s a neat, very user-friendly touch that means you’re never left wondering whether the keyboard is connected or not and saves on battery life — Logitech claims up to three months when used around three hours per day.

One final plus point is that’s it’s very easy to remove your iPad when you want to, so you don’t have to put up with the extra bulk when you just want to read a book or magazine. Our only irksome criticism of the design is the mute toggle switch is very hard to access when using the case, but it’s an annoyance we can just about tolerate. 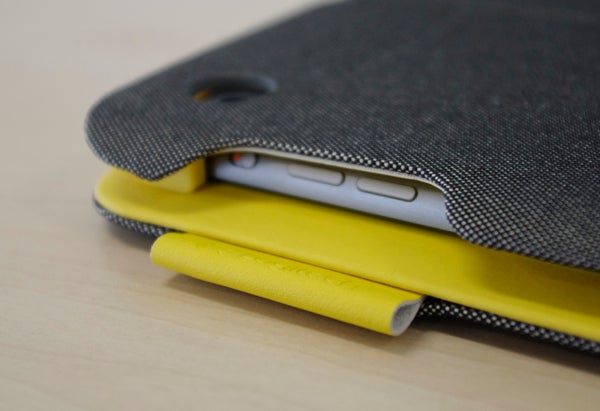 So far, so positive, but there’s no escaping that the actual typing experience on the FabricSkin Keyboard Folio is a step below due to the fact it’s a not a physical keyboard in the traditional sense. Instead the keys are like a soft membrane above actuators, which gives the keys a slightly sluggish, spongy feel that takes a little getting used to.

The layout is also a little compromised. The ‘Q’ and ‘A’ keys on the left are merged with the Tab and Caps Lock keys respectively, which means everything feels a little off-kilter at first. You’ll get used to this layout after a while, though, and apart from these small liberties the basic layout is fairly standard. 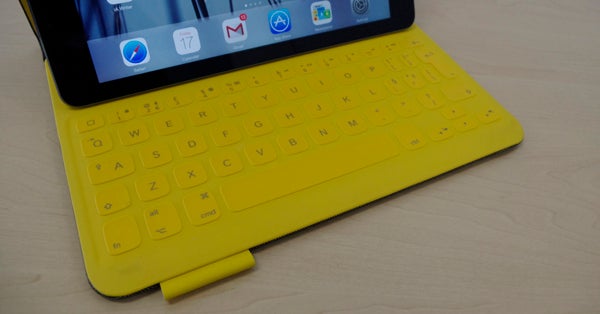 In fact, there are some nice iPad-only secondary functions, such as the selection shortcut on the arrow keys that lets you select whole words rather than individual characters. The only slight gripe, and it is a small one, is things like playback and volume controls are actually third functions, not even primary or secondary ones, on the top row of number keys. Irritating as this might seem, however, it means the usual secondary functions remain unaffected.

Overall, while we imagine many people will dismiss the keyboard out of hand, it’s worth persevering with — it’s certainly won us over after a couple of weeks. 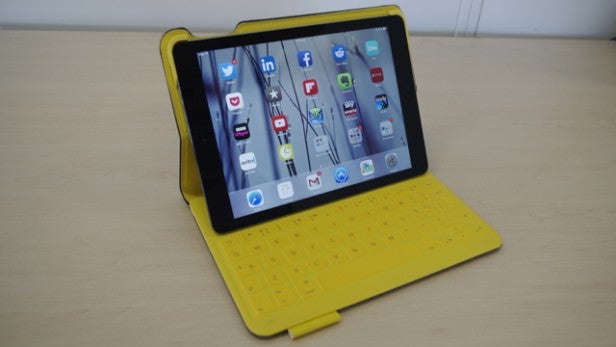 Should I buy the Logitech FabricSkin Keyboard Folio for iPad Air?

This really comes down to how much you’re willing to spend to get what the FabricSkin offers. It’s by no means perfect as the typing experience takes a little getting used to and the FabricSkin adds a fair amount of heft, but it’s the simplest, most elegant folio keyboard we’ve come across and is stylish to boot.

If you want the absolutle best typing experience possible then the Logitech Ultrathin Keyboard is still the one to go for, but the FabricSkin is a great alternative if you want a keyboard and all-in-one protection.

A neat, innovative but rather pricey folio keyboard for iPad Air, but a good one if you can justify the price.

Next, read our Tablet Buyer’s Guide