If you’ve read my previous review of Logitech’s MX Revolution mouse, you’d know the company has a knack for creating good looking and innovative peripherals .


While it’s been doing it for years, recently Logitech has been excelling itself and the wireless diNovo Edge is another example of it trying to push the bar just that little bit higher.


Although the diNovo has an SRP of £149.99, a quick snoop about the Internet reveals it’s available for in the region of £105 – which is still expensive but at least not prohibitively so. 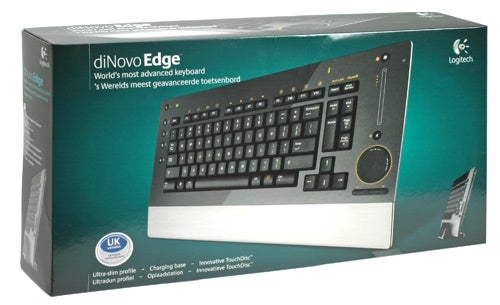 Regardless of cost the diNovo is a handsome beast, and it’s well worth taking the time to admire the photos. Laser cut from a single sheet of Plexiglass, the diNovo is only 11mm thick with a glossy black finish that’ll bring out the inner magpie in all of us.


To complement this striking look, the diNovo features a smart brushed aluminium palm rest as well as a pointedly ornamental charging stand. This, combined with the striking design, indicates that the diNovo’s true home is the living room rather than sitting on a desk.


This idea is further enhanced by the inclusion of a circular touch pad, or TouchDisc as Logitech are calling it, enabling you to comfortably operate a Media Center PC whilst chilling out, maxing and relaxing all cool on your designer sofa. Then, once done with it, popping it in its stand to allow people to admire it as one might an Apple notebook. 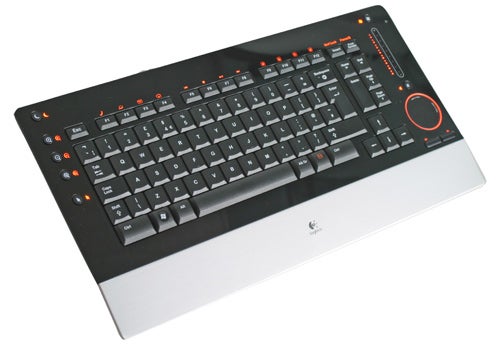 Before one gets carried away with all this aesthetic frippery however, let’s not forget that the diNovo does still have a function to perform – being a keyboard.


Out of the box Logitech includes a USB Bluetooth Receiver, the charger stand, Set Point Software CD and a Quick Start Guide. Rather like a great number of manufacturers these days, Logitech doesn’t provide a full manual with its products though support is readily available online.


Also included is a small cloth, and you‘ll soon see why it’s needed because the Plexiglass finish suffers badly from fingerprint marks. That the keyboard features a touch sensitive volume control only compounds the problem, and short of wearing surgical gloves or having your fingerprints surgically removed it’s impossible to avoid defacing the silky smooth surface. 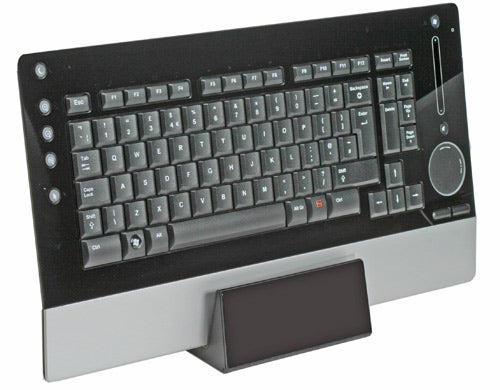 When looking at the layout the lack of a number pad is immediately apparent, with the TouchDisc and touch sensitive volume control taking up the vacated space. Personally I didn’t miss it but perennial number pad users – otherwise known as accountants – need not apply.


At first reflection you’d be forgiven for thinking the TouchDisc to be a hair-brained idea; a monitor screen is after all square – or rectangular depending on the aspect – and certainly not circular. But, with a little tweaking of the sensitivity settings, it is possible on a 19 inch 4:3 aspect monitor to move the cursor to opposite corners in one movement.

Indeed, cranking up the acceleration further makes this possible on a 21 inch widescreen display – though there’s a natural trade-off with smaller movements being rather more awkward to perform.


The TouchDisc also benefits from vertical and horizontal scroll, with Logitech implementing a clever system whereby running your finger around the circumference activates the scroll. For the most part this works very well, though occasionally it can be temperamental to get going.


Whilst using the diNovo I’ve yet to accidentally move the mouse, but it can also be turned off and on by holding down the Fn key and pressing the corresponding mouse button below the TouchDisc. 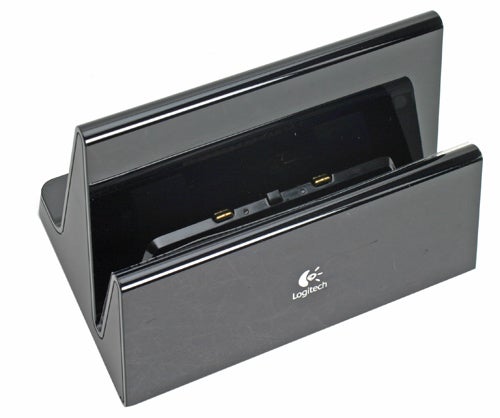 Above the TouchDisc are a mute button and the touch sensitive volume control, which is backlit in orange when used. At the very top is a small button, which by default opens your media player, though this can be programmed for a variety of other tasks such as opening a particular file, folder or webpage.


On the far left running from top to bottom is a programmable Sleep Mode button, three zoom controlling buttons and a final auxiliary left click button to complement the two already provided. This in particular is a thoughtful addition, making it a lot easier to select portions of text or drag and drop using the TouchDisc.


Running along the top are the normal array of function keys which, when holding down the Fn key, become media keys with backlit icons hovering just above. 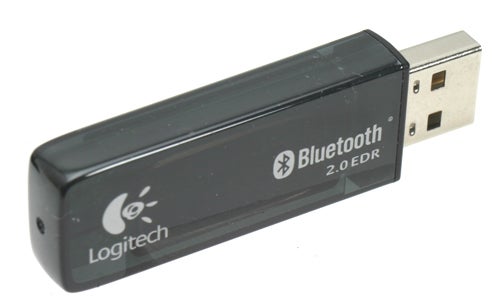 F1 through 4 launch VoIP services, One Touch Search, mail client, and homepage and all these have a degree of programmability from the software. F5 through 8 control playback, with the usual array of back, stop, play/pause and next keys. Finally, F9 through 12 are labelled A to D and these can be programmed to do anything you desire – within reason.


As you can tell, the diNovo packs a whole load media functionality into its slim frame; further enhancing its status as the ideal partner for a Media Center PC. If I were to have one complaint, however, it would be nice to have the option of toggling, rather than holding down, the Fn key for using the function keys as media keys.


Last, but by no means least, for what is essentially a large laptop keyboard the diNovo is delight to use for general typing tasks. There’s a nice level of travel in the keys, and each key feels even and perfectly durable. The delete key is oversized, which I found useful, while the Insert key has been moved upwards, above it. 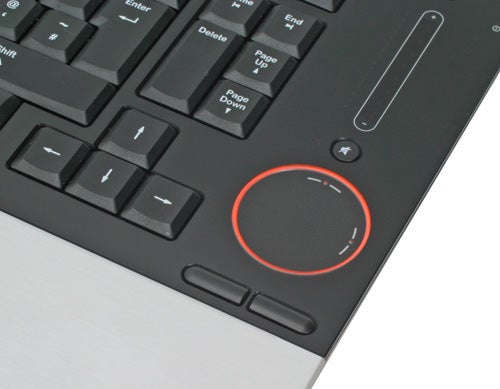 The keyboard does, however, share one annoyance prevalent in laptop keyboards – an oversized Caps Lock key. I say oversized, comparatively it’s the same size as a Caps key on any normal keyboard, but unlike a standard desktop keyboard there’s no large gap between the A key and the Cap Locks key thus making it susceptible to accidental presses.


This issue accepted, however, there’s very little worth criticising about the keyboard performance even if I’d personally still go for a standard desktop keyboard for regular typing tasks.


There’s a great deal to love about his keyboard: it’s good looking, has loads of media functionality and is great for general use. The only real concern is the price which, even at the discounted £105, is still a steep for a keyboard. As a living room solution, however, the diNovo is perfect and you’d be hard pressed to find anything more suited to that environment.