What is the Logitech Craft?

The Logitech Craft is a wireless keyboard that’s aimed at photographers, video editors, and graphic artists. The concept lies around a small rotating wheel that Logitech has dubbed the ‘Crown’, which allows for an additional way to control software used on a daily basis.

The overall package is very expensive, and has limited advantage when placed in the wrong hands. But if you’re a creative professional, take note – Logitech has produced something that can enhance your workflow in a way that can not only reduce headaches, but save you time, too.

The Craft is a full-size keyboard, and while it’s very pricey, it certainly shows. The whole thing screams quality, with a large aluminium piece sitting along the top of the board, and a smooth matte plastic covering the rest of the keyboard.

The chiclet-style keys rest elegantly, with an inverted circular dome on each key adding to that premium feeling. Each key is also backlit, with an automated system that only lights the keys when you place your hands nearby, and at a brightness that’s appropriate for your environment – very cool. 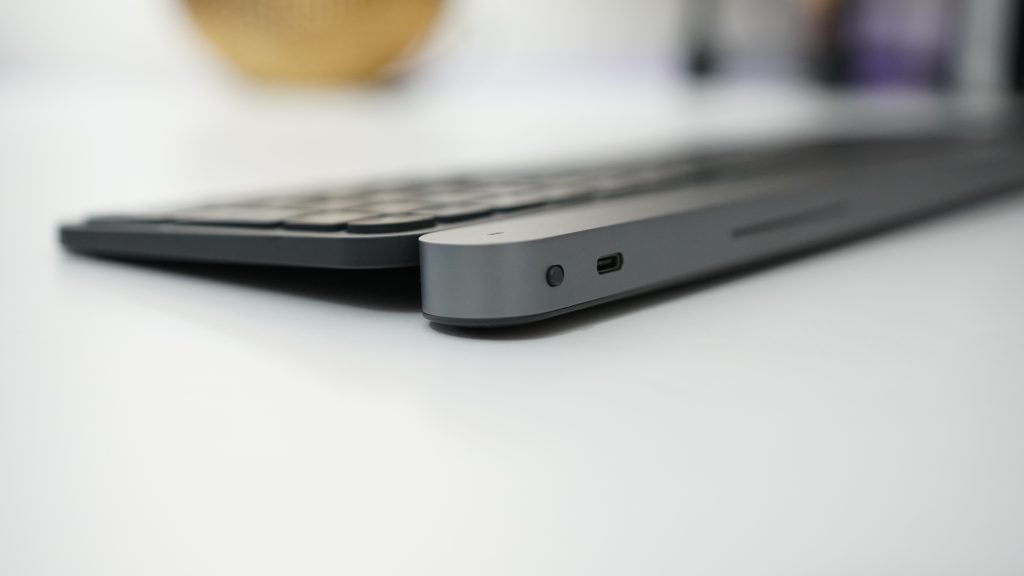 The top bar is where you’ll find the headline feature – the metallic scrolling wheel, or what Logitech call the ‘Crown’. It’s well-sized, with a smooth action that inspires confidence in its ability. The bar also houses the USB Type-C port for charging, and the battery itself. This makes the keyboard rather heavy, but gives the Craft an excellent weight balance. Unfortunately, there isn’t any way to adjust the height, so if you prefer something dead flat, or pitched, you’re out of luck.

Key selection is excellent. Aside from the usual array of typing keys and the number pad, there’s a row of function keys mixed in with the F-keys. Controlling media is therefore much easier, and those unfamiliar with Windows and Mac shortcuts will appreciate this. It’s not perfect, though, as I would have preferred to have single media keys rather that split functions.

Further to this, Logitech uses a strange system that stops lesser-known applications working with the media controls – Tidal desktop and Chrome extension Streamkeys both failed to work with the keyboard. As this is a software issue, I’ve reached out to Logitech for a fix, and will update this article when I know more. 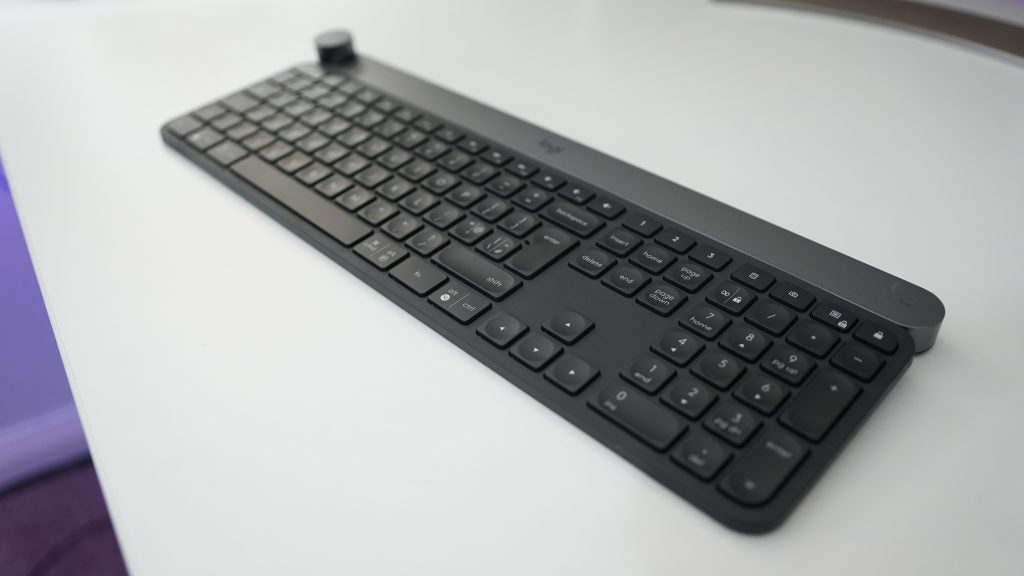 Connectivity is handled in one of two ways – either use the included wireless receiver, or pair over Bluetooth. You can use both at the same time across multiple computers, and both systems work reliably when in good range. The keyboard did lose connection when the adapter was clearly obstructed, but after some tweaking there were no further issues.

Using the Craft in my day-to-day workflow has been a pleasure, and while it’s not completely perfect, I can really appreciate just how useful this keyboard could be in the right hands.

My typical office day consists of writing, video editing and graphic creation, and each activity makes great use of the Craft. To get started, you’ll need to download the free Logitech Options software. It’s here that you can reassign keys and customise the Crown’s functionality. It’s a little limiting, and there are only a small number of functions that you can assign to the Crown, however, you can set functions on a per-app basis. I was able to configure Davinci Resolve to scroll through the timeline for example, which made video editing that little bit easier and more natural. 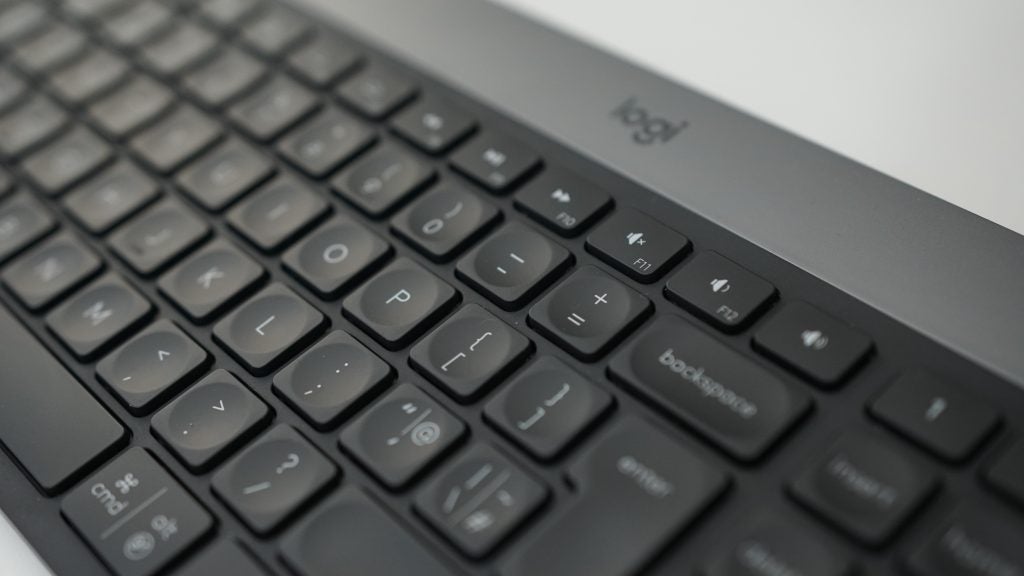 To really unlock the potential of the Craft, you’ll want to use one of the officially supported applications. Apps with dedicated profiles really unleash the Craft’s potential, as its functionality adapts to the situation. For example, If you’re in Adobe Photoshop, the Crown will adapt to the tool that you’re currently using, saving you from massive amounts of time clicking about. There are also different functions per tool, and simply tapping the touch-sensitive crown will cycle through them. There are also two modes that control the smoothness of the dial, with the option for a natural linear scroll, or a click-stop mode for tactile control. It’s really great to use, and is fantastic in each of the supported apps.

Of course, the big issue is that your average application won’t be supported, and as a daily user of GIMP and Resolve, the advantages are reduced. I do have to praise Logitech for a great start, though, as native apps include Adobe Premiere and Photoshop, as well as the Microsoft Office suite (Windows only). The usefulness of this keyboard is massively governed by application use, so do bear this in mind.

Typing is a fairly usual affair on the Craft, with the chiclet-style keys performing as you’d expect. It’s a really comfortable keyboard to use for emails and long-form writing, and other than the squeaky spacebar on my review unit, there’s very little to complain about. For gamers, though, while the keyboard is perfectly responsive across all titles, a mechanical keyboard is a much better bet at this price.

Battery life is rated at one week, and from my testing that certainly seems accurate. It’s not as long as I’d perhaps like, but the USB-C connection is very easy to plug in and charge on a Friday as you leave the office.

Why buy the Logitech Craft?

Logitech has crafted  an excellent keyboard. If you’re an avid photographer or video editor, the Craft has the ability to save you time and hassle every day. It’s well made, looks great and ultimately performs where it counts.

It is a rather niche product, though. With that large price tag, you really do need to work with the supported applications for it to make sense. But if you’re in that camp, and are willing to invest the money, it’ll pay off in the long term.

A step forward for productivity – but at great cost.