Life has become much trickier in recent years for store-exclusive brands like Matsui, Beko, Technika, Goodmans and Orion. After all, traditionally these brands have made their mark just by being exceptionally cheap, so they’ve struggled to make themselves seem as desirable in the face of plummeting prices from the big AV brands.

It hasn’t helped that precious few of these ‘second-tier’ brands have been able to deliver much quality compared with what the likes of Samsung, LG and Toshiba have offered for not much more cash.

The Dixons/Currys group has high hopes for its latest in-house effort, though. Sporting the Logik brand, the £250 L26DVDB11 sports a 26in screen, an integrated DVD player, a Freeview tuner, and most unusually for a cheap, small-screen TV, a promising audio feature in the form of the SRS TruSurround HD system. 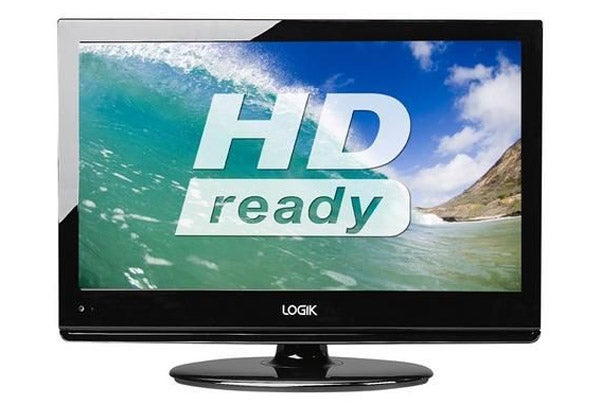 The L26DVDB11 is not the first small TV to promise whizz-bang sonics, though, and in the vast majority of previous cases such promises have fallen distinctly flat. So we’ll certainly have to reserve judgement. However, the SRS TruSurround HD system tends to one of the better ‘pseudo surround’ audio processing systems around, so our hopes for the L26DVDB11’s audio are at least marginally higher than usual!

An investigation of the L26DVDB11’s connections reveals more good news. For as well as boasting three HDMIs where we’d normally only expect two (at best!) on such an affordable combi TV, this Logik set also carries a D-Sub VGA port so it can double up as a PC monitor. Plus it’s got a USB input capable of playing video (MPEG 1/2) and music (mp3) files as well as the more predictable JPEG photos.

Even more remarkably, the USB port can also be used to record programmes from the set’s Freeview tuner to USB storage devices – a feature normally reserved for relatively high-end TVs. This feature can additionally be used for pausing live TV. Excellent.

Rather less excellent, though, is the L26DVDB11’s design. For while its extremely glossy black finish isn’t horrible, its angular lines are rather straightforward, its rear end sticks out a country mile versus most of today’s LCD TVs, and the build quality is distinctly plasticky.

Such a TV design would normally be partnered with an utterly basic remote control. But actually the one with the L26DVDB11 initially seems quite superior, thanks to its pleasingly large size, reasonably sensible button layout, glossy finish, and rather fetching metal-effect ‘rocker’ circle at its centre.

However, it fairly quickly becomes apparent that the effective operating distance and angle of this remote is somewhat limited, and that the buttons for the DVD playback are pathetically small and tucked away amid a host of other buttons, making them a chore to use even in a bright room, never mind in a room darkened for movie viewing.

Heading into the onscreen menus, the way they’re presented sitting across the centre of the screen rather than down the side can be irritating if you’re trying to watch something at the same time as you’re using them, but overall they’re reasonably attractive and pretty sensibly organised – with one or two notable exceptions!

The first of these exceptions is the way the tuning menu is placed at the top of the main menu. This makes no sense at all given that once you’ve first set the TV up, you’ll hardly ever have to revisit the tuning again. Second, it seemed bizarre to us that a couple of key picture controls, the backlight level adjustment and the aspect ratio controls, were found in an Option menu rather than within the normal picture adjustment menu. 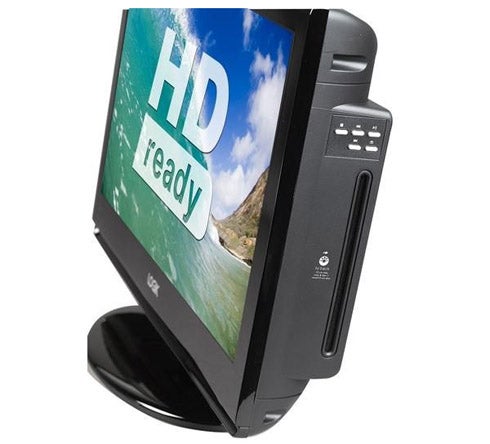 Among the features found in the onscreen menus, as well as the previously mentioned backlight adjustment and SRS TruSurround HD audio, you get a series of picture presets and a noise reduction system. But that’s about it.

Heading for the L26DVDB11’s DVD capabilities first, things didn’t get off to a great start when the disc slot stubbornly refused to even think about taking in our Pirates Of The Caribbean DVD until we’d first not only chosen DVD from the TV’s long onscreen input list, but also pressed the tiny ‘disc accept/eject’ button on the remote.

Many other combi TVs are clever enough to take in a disc as soon as one is presented to their slots irrespective of what input you’re watching, and will switch to the DVD ‘channel’ automatically. This is clearly a much better approach, especially for anyone after a combi TV that a youngish child might be able to operate by themselves.

Also troubling about the disc-loading mechanism is the way you have to load the discs with their rear (playback) sides facing you, rather than the printed side as you would normally expect. And then there’s the quite horrible creaking and groaning noises the DVD section makes as it slowly – oh so slowly – drags your disc in. Basically, there’s nothing about the L26DVDB11’s DVD section that inspires any confidence at all in its longevity. 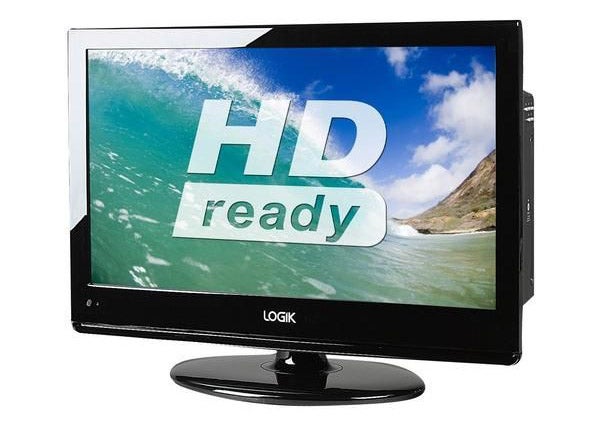 The picture quality the DVD section produces once the disc is finally playing has its moments, but for the most part is pretty average. Its strengths are that it produces colours quite vibrantly, with the blues and reds of the British soldiers popping off the screen surprisingly well for such a cheap TV.

Skin tones are decently natural for a cheap TV too, avoiding the typical budget reddish or orange tones. The DVD images look quite detailed and passably sharp too, with LCD motion blur not causing quite as many softening woes as we would have expected.

Perhaps the biggest relief, though, is the fact that there’s no obvious trouble from either grain or MPEG decoding noise.

On the downside, the screen’s black level response is very average indeed. This means that all dark scenes look washed out and short of shadow detailing, and it can also cause some colours during dark scenes to lose the naturalism enjoyed during bright scenes.

It doesn’t help, either, that the set’s black level issues worsen and backlight levels become quite inconsistent if you have to watch the TV from an angle.

Not surprisingly, this same problem is also abundantly apparent when switching to Blu-ray playback, immediately and severely hampering the set’s ‘cinematic’ potential. Also quite quickly clear with HD sources on the L26DVDB11 is that they don’t look much sharper than DVDs. Obviously a 26in TV is never going to be as good at showing standard def vs HD differences as a much larger TV, but even so there’s something notably non-HD about the L26DVDB11’s HD pictures.

As a further concern, the set struggles to show motion effectively with 24p sources, suffering quite noticeable stutter and judder – to the extent that we ended up switching our Blu-ray player into 1080p/50Hz mode.

On the upside, colours still look punchy during bright scenes, and brightness levels are quite high. 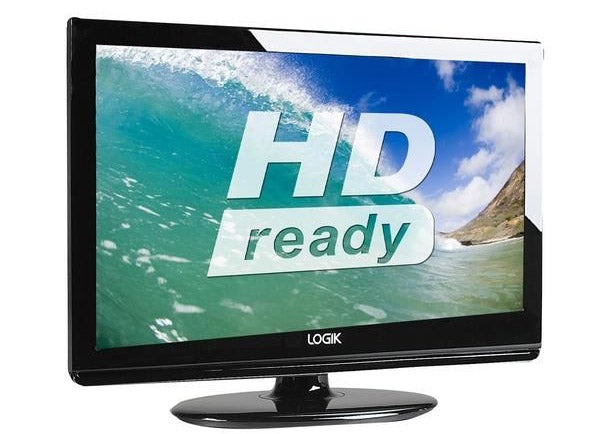 Given the built-in DVD deck, of course, it’s pretty unlikely that many of the L26DVDB11’s buyers will be playing Blu-rays into it anyway. But our Blu-ray tests more or less match the way the set handles more likely HD sources like Sky HD/Freeview HD set-top boxes, and PS3/Xbox 360 console games.

Talking of gaming, while the L26DVDB11’s punchy colours and reasonable freedom from motion blur and acceptable (if hardly world-beating) 4ms of input lag are helpful gaming attributes, its lack of black level and shadow detail counts against it if you’re playing predominantly dark games like Dead Space 2.

Turning next to the TV’s Freeview picture performance, there’s more disappointment in store. For oddly the set’s colours take a dip with relatively low quality material, looking less consistent and becoming oddly washed out with some hues. Freeview pictures look a bit soft too, presumably because the set’s processing for upscaling Freeview to the native HD resolution isn’t up to much. Motion blur is more obvious during Freeview viewing too.
Despite all this, though, the L26DVDB11’s standard def pictures are still perfectly watchable. They’re just very average.

So we come to the SRS TruSurround HD audio. And actually, this isn’t bad at all. Or to put it better, while there’s never the slightest hint of any surround sound audio effects, there certainly is more power and range to the L26DVDB11’s sound than we’re accustomed to hearing from sub-32in TVs – especially cheap ones. There’s a slightly artificial and muffled feeling to the sound during potent action scenes, but for the most part this set is sonically a cut above most of its rivals.

Verdict
The L26DVDB11 just about does enough with its features – especially the built-in DVD player and USB multimedia talents – to make it worth considering as an ultra-affordable and flexible option for a teenager’s room or a study. It sounds better than most small LCD TVs too. But a rather soft look to pictures together with some black level response shortcomings ultimately stop it from being anything more than average.