When you consider that uncompressed CD audio has had a huge amount of stick over the years from audiophiles, it’s no wonder that compressed digital audio players have had an even rougher ride. It’s all about warmth, tone and detail; a good, old-fashioned vinyl Hi-Fi separates system has it, as do some of the premium CD-based systems, but until recently purists would argue that no system based on an iPod or digital audio player would come even close to Hi-Fi quality. This stance is changing with the arrival of high-end iPod docks and audiophile players that play uncompressed file formats, but it’s slow going. With the right sound dock and speakers, your iPod might be capable of crisp sound, clear sound, even detailed sound, but can it ever produce a rich, warm, lifelike tone? 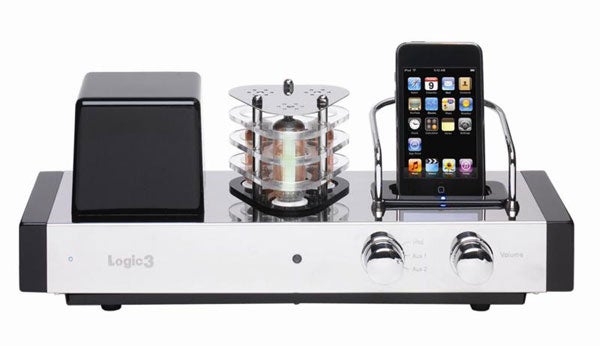 Maybe. At the end of last year Fatman – an offshoot of professional amplification specialists TL Audio – released the iTube ValveDock iPod music system; a valve-based iPod dock and amplifier that used the warm tone of valves to compensate for the tonal weaknesses of the iPod and other digital audio players. This idea was a big success, earning Fatman praise and plaudits everywhere, including here at TrustedReviews. With high-end iPod speaker systems all the rage these days, it’s no wonder that it’s an idea that other manufacturers are keen to give their best. Enter Logic3, and the Valve 80 Amplifier and Speakers.


Well, Logic3 is a company we’re more familiar with from gaming add-ons than audio, but the manufacturer already produces a range of iPod speaker systems, and has clearly thought hard about how to do a high-end product right. For a start, the Valve 80 looks the part. The chassis, with its glossy stainless steel cover, puts those gorgeous, glowing vacuum tubes exactly where they should be – centre stage – with the transformer to the left and the dock itself to the right. On the front you’ll find just a power light, the understated Logic3 logo, a sensor for the bundled remote control, the volume knob and a three way input selector. It’s all stripped back and classy, without extraneous displays or controls, and with music playing, the valves glowing and a volume meter on the front valve pulsating in sync with the music, it’s the sort of system that you want to sit listening to in a darkened room. 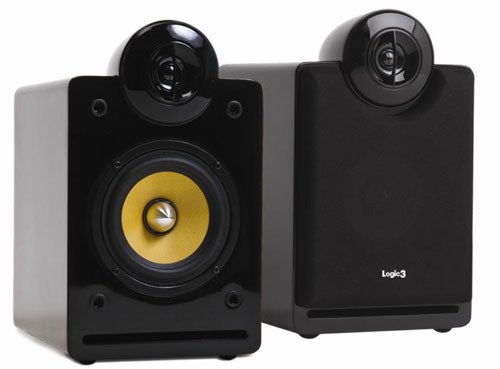 Of course, a stripped back design doesn’t necessarily mean no frills. Sure, the dock itself is a bit basic, with no fancy system to support different models of iPod, just a hollow which will accept Apple’s standard adapters, but it’s functional and attractive. Around the back you’ll find standard, gold-plated speaker terminals which will accept bare wire or banana plugs, plus two sets of auxiliary inputs and composite and S-Video outputs with which you can – depending on your iPod – deliver video to your living room TV. Logic3 also supplied a reasonably slimline remote, with menu, shuffle and bass and treble tone controls on top of the usual playback functions. As usual, however, it’s difficult to do anything too sophisticated from a distance, for the simple reason that you won’t be able to see your iPod’s screen.

Sold only as a system, the Valve 80 includes two bookshelf speakers. They’re solid, weighty and come in an expensive-looking gloss black finish, and with the grilles removed you could easily pretend that they came from a more renowned Hi-Fi brand. Rubber domes on the bottom help isolate the speakers from whatever surface you sit them on, and the cables provided are good, thick and come with gold-plated banana plugs – not the sort of nasty bell-wire provided with some speaker systems we see. The units match a 4in Kevlar bass/mid-range speaker with a 1in silk tweeter, the latter rising out of the top in a manner you might recognise from certain Mordaunt-Short or B&W speakers. Rated at 50W per channel, these speakers should be able to handle the 40W per channel output from the hybrid vacuum tube amplifier (like the Fatman iTube ValveDock, the Valve 80 uses a combination of tubes and mosfets for amplification). 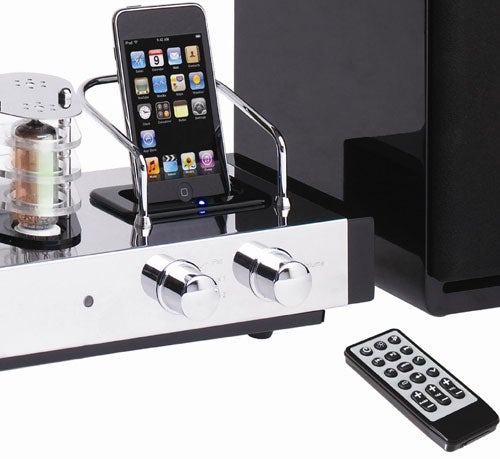 So how does it sound? Well, hooking up my 1G iPod Touch I gave the speakers time to run in overnight before running through a wide selection of favourite tracks. On the positive side, the sound emanating from the Valve 80 easily puts the majority of iPod docks to shame. There’s a real power to the sound, along with body in the bass and mid-range and plenty of bite at the top end. Listening to The Bones of You from Elbow’s The Seldom Seen Kid, you can hear how confidently the Logic3 kit deals with the syncopated drums and twisting, electronic bassline while allowing the strummed acoustic guitar and adventurous vocal to cut in through. It’s a beefy, lifelike sound, and warmer and richer than you’d get from a cheaper, smaller iPod system. On the John Legend/Corrine Bailey Rae duet of Where is the Love from the Live in Philadelphia album, the Valve 80 does a fine job of capturing the sort of nuances that might convince you that you’re listening to a live performance. Vocal tones sound smooth when they should and raw when they shouldn’t, while the backing band sounds tight, playful and lively. In the end, poorly encoded or strongly compressed music is never going to sound great – a good system only highlights the weaknesses – but feed the Valve 80 good material and it usually produces decent results.

Note the ‘usually’ and the ‘decent’ – not ‘incredible’, ‘excellent’ or any other big superlative. On the one hand, the speakers can’t handle a lot of bass. Give the Valve 80 something with some big bass notes, like the Timbaland remix of OneRepublic’s Apologize and all those low notes can begin to create distortion, particularly if you set your iPod’s EQ to one of the more bass-heavy presets. More seriously, the sound has limitations that true audiophiles might find unacceptable. On a rocky number, like Velvet Revolver’s Let it Roll, there’s not enough beef in the guitar and there’s something a little mushy around the edges of the sound, as if some of that old-school warmth has come at the expense of clarity. Play the Act 1 prelude from Wagner’s Tristan and Isolde and the Valve 80 is left doggy-paddling out of its depth. While the brass section comes through with strength and precision, the string section loses some of its crispness and richness of tone. The overall effect is – I hate to say it – a little boxy. This is not the kind of stuff that most iPod docks can handle, but with a product like this at this kind of price point, you have the right to expect a little more.


And you can get it, too, but only if you ditch the supplied speakers and plug in alternative units. Hooking up a pair of much loved, much used (and rather old) Wharfdale Diamonds. Suddenly, the sound from the Valve 80 amplifier comes alive. There’s nothing soft, confused or woolly about the Wagner, Let it Roll is rollicking and raunchy, and The Bones of You threatens to raise hairs on the back of your neck. Gravity, from Alison Krauss and Union Station’s Lonely Cuts Both Ways, sounds warm and intimate, just as it should, with the rich tones of the vocals and acoustic instruments balanced perfectly. Listening to Strawberry Wine from Ryan Adams’ 29 is practically a spooky experience, its tale of druggy self-destruction almost painfully raw and real. Slap on Justin Timberlake’s Lovestoned and there’s a party going on in your living room (hot chicks sadly not supplied), the Valve 80/Wharfedale combination getting down with the infectious groove, then sobering up to dish out the gorgeous, string-led coda. In short, with the right speakers the Valve 80 can sound brilliant.

The problem is that you can’t buy it with the right speakers – you have to pay for the ones that come bundled in. Here the Fatman iTube ValveDock scored by giving you the option to buy the system with or without speakers, meaning you can now pay around £180 for the ValveDock, wander down to your local Hi-Fi emporium and buy a pair of decent bookshelf speakers that suit your own sonic and musical tastes for around £100, and come away with a pretty tasty system. Buy the Valve 80 and that’s not an option; you can upgrade your system, but you’ll have to cough up for the speakers anyway. While this is the case, it’s hard to recommend investing in the Valve 80 when you can buy the iTube ValveDock and roll in your own speakers for the same money or less, and there are other strong alternatives now hovering around at the same price point. While the Valve 80 certainly brings you an iPod system that comes close to true Hi-Fi quality, there’s still a little too much ground in between for comfort.


A well-built, beautifully finished and decent sounding valve-based iPod speaker system, but one that’s let down by the limitations of the bundled speakers. If you want the warm tone of valves and true Hi-Fi quality, the Fatman iTube remains your best bet.