Sneaky little devil, the Logic3 i-Station 25. First you think it’s just another inexpensive iPod Speaker Dock. Then you notice that it’s an inexpensive iPod Speaker Dock that has been designed specifically (though not exclusively) with the iPhone and iPod touch in mind. However, it’s only when you actually get your hands on it that you discover that it’s iPhone/Touch focus is more than skin deep. The i-Station 25 has a rather nifty little party trick to play, and it’s one that only really works with these two products.


It’s not the most impressive unit on first impressions. At just over 400g it’s very light, and while I’m occasionally surprised, I usually find the old Hi-Fi adage “the heavier the equipment, the better it sounds” has some truth to it. Second, it’s built from fairly cheap-feeling black plastic, and while it’s quite solidly put together, neither the piano-black indent for the iPhone, iPod touch or iPod, nor the silver edging does a lot to convince that this is a high-class product. 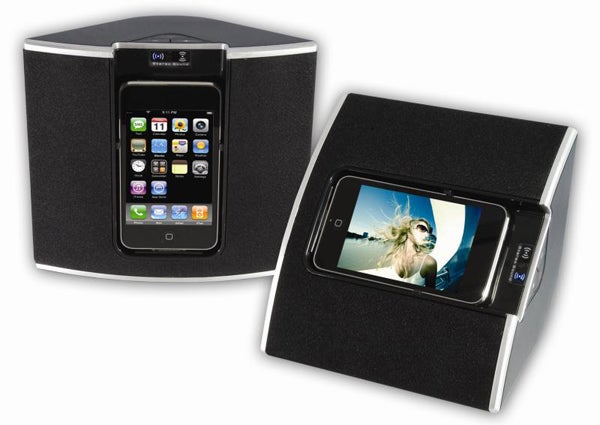 On the positive side, the i-Station 25 does come with a slim, functional remote control and it does include a line-in and a composite video output, which is always handy if you want to watch films, trailers, TV programmes or pop videos stored on your iPod on a bigger screen. Controls, meanwhile, are as simple as you can get, with only a power switch and volume up and down buttons to deal with.


The i-Station 25 can be used with most models of iPod, including all three generations of nano, but it’s really built to work hand in hand with an iPod touch or iPhone. Your Apple product of choice slips neatly over the standard Apple dock connector, then you click it back into position in the indent, where it’s held in place by a rubber rest and two spring-loaded clips. These keep your touch or iPhone held very snugly, and this is important when the dock reveals its piece-de-resistance.

You see, one of the great pleasures of using an iPod touch or iPhone is the ability to twist it from portrait into landscape mode. The accelerometers in the device spot you’ve done it, and instantly (well, most of the time) rotate the screen to match, giving you video playback in the correct 16:9 ratio or allowing you to flick through your music collection in Cover Flow mode.


The i-Station 25 lets you do this while your touch or iPhone is in the dock, it’s own accelerometers recognising the change in orientation, and switching the signals going to speakers so that the top two speakers now deliver the right-hand part of the stereo signal, while the bottom two deliver the left-hand portion.


Flip the i-Station back to portrait mode, and it (and hopefully your iPod) switch straight back. A blue LED-lit indicator above (or to the right of) the iPod confirms which mode the dock is currently working in. The trick also works with a 4th gen iPod nano, but without the clips holding it in place you’re putting a lot of strain on the connector. 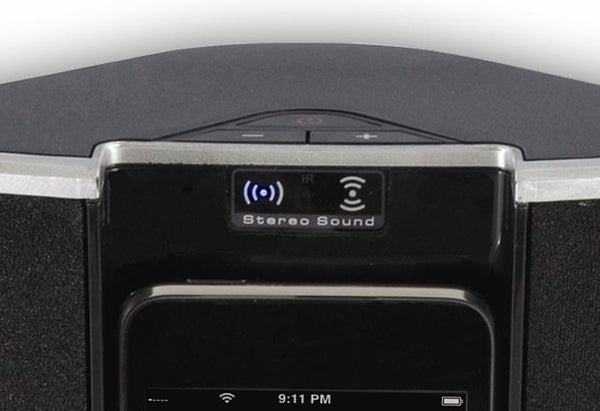 The i-Station 25’s other selling point is that it doubles as a portable system. You can happily plug in the standard-issue wall-wart power supply and charge your iPhone or iPod, but the speakers will also run from four AA batteries if you feel the need to take your music outside.


Now for the bad news. In its portrait orientation, the i-Station 25 is not a great sounding speaker dock. The sound is thin, boxy and muffled, with little sense of stereo separation, and it’s hard to find anything that really sounds great on it. It fumbles the funky drums and syncopated guitars of Maroon 5’s Make me Wonder, giving the sort of sonic performance we used to expect from budget brand micro stereo systems. The driving beat of Ladyhawke’s Dusk ’til Dawn is rendered impotent, with the big beats made to sound dull and woolly.

The i-Station 25 fares better when it doesn’t have to handle too much drum and bass at the low end, but even with the more refined, warm, acoustic tones of Alison Krauss’s Wouldn’t Be So Bad it struggles to resolve any detail. I know I shouldn’t expect much from a box this small or this cheap, but the old JBL On-Stage speaker dock I have loitering in my kitchen blows the i-Station 25 clean out of the water at lower volumes, and when you push the volume up the On-Stage can just about fill the room with music while the Logic3 just fills the room with a mildly unpleasant noise. Its four 40mm, 4w drivers just aren’t up to the job. I wouldn’t even dream of comparing it to something like the Klipsch iGroove SXT – it just wouldn’t be humane.


Turn the dock on its side and it sounds a little better. Oddly, there seems to be more stereo separation and the overall tone is brighter. It’s still not good, however, so if you’re buying a dock mostly for listening to music, then the i-Station 25 isn’t one to add to your shortlist. Plus, while the i-Station 25 is supposed to suppress the noise interference coming from the WiFi radio in the iPod Touch (not to mention the cellular signal in the iPhone) it only minimises it rather than eliminates it. You won’t get the popping and clicking you’ll get on some bargain basement speaker docks, but there’s certainly a little background fuzz. 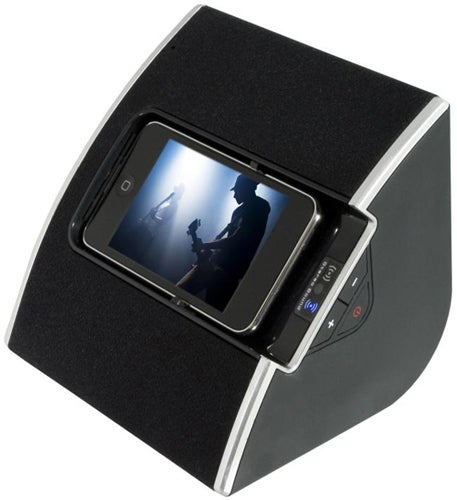 Unexpectedly, the i-Station 25 does have one, last-minute saving grace – it’s not such a bad performer when it comes to watching films. Queuing up V for Vendetta, it’s surprising how well the i-Station 25 copes with voices, background music and effects, positioning different layers of sound across the soundstage to create a more immersive experience than you’d usually get when watching a film on your iPod.


Of course, the main reason to have films on your iPod is because you plan to watch them on the move, in which case you’ll have earphones and the i-Station 25 would be redundant. That said, in the event that you would like to watch films on an iPod plugged into a speaker dock, then Logic3’s box, with its compact design and clever accelerometers, provides you with a good way to do so. In fact, it cradles the iPod at a nice height and angle for watching on your desk, the kitchen table or your lap.


Personally, this isn’t enough of a plus point for me to make the i-Station 25 worth having, and I’d rather opt for a better sounding dock than have one that switches orientation automatically. For me, this is a dock with a great gimmick, but at the end of the day, just a gimmick. If you want something that actually delivers great-sounding music, look elsewhere.


The built-in accelerometer is a nice and well implemented feature, but it can’t make up for the fact that the i-Station 25 doesn’t sound that good. While it’s not bad for watching movies, listening to music is a no-no.