Technology and style are concepts many companies are only starting to realise go hand in hand, but this accusation could never be levelled at Loewe. The German manufacturer has long married both concepts producing visually arresting products with similarly jaw dropping price tags. The approach has served the company well in its traditional TV and AV equipment lines, but does it translate to iPod docks? 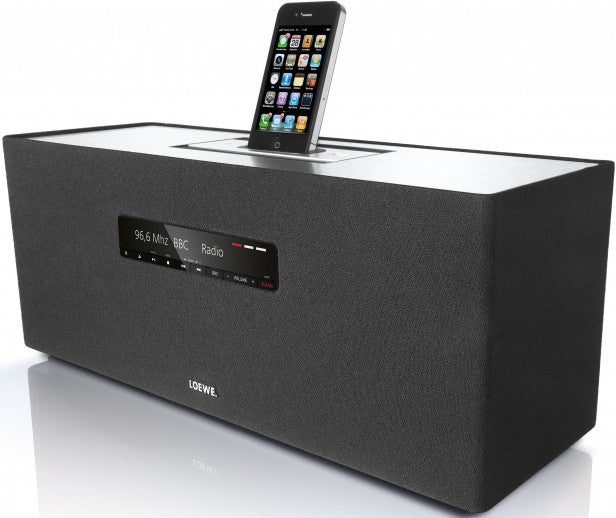 We were lucky enough to be the first UK site to get our hands on the Loewe Soundbox and it makes an immediate impression. Removed from its packaging, the it is 100 per cent Loewe: striking, polarising and individual. At 470 x 190 x 58mm, 6.1Kg and decidedly rectangular, the ‘box’ aspect to the Soundbox is certainly true. Meanwhile typical Loewe styling comes in the form of a near-retro dot-matrix-esque LCD display, long line of physical control buttons and the ‘feature wall’ top which comes with a textured hard metal inset. Being Loewe the top is interchangeable and can be swapped out for an array of different colours “to suit any décor”.

Functionality is more traditional. An iPod dock is the primary means of connectivity, but it is complimented by USB, an auxiliary input and a headphone socket. Also packed in are an FM radio with RDS and a slot loading CD player. For audiophiles who struggle to see the value of lossy codecs and lament the demise of their extensive CD collections this will be a key feature. 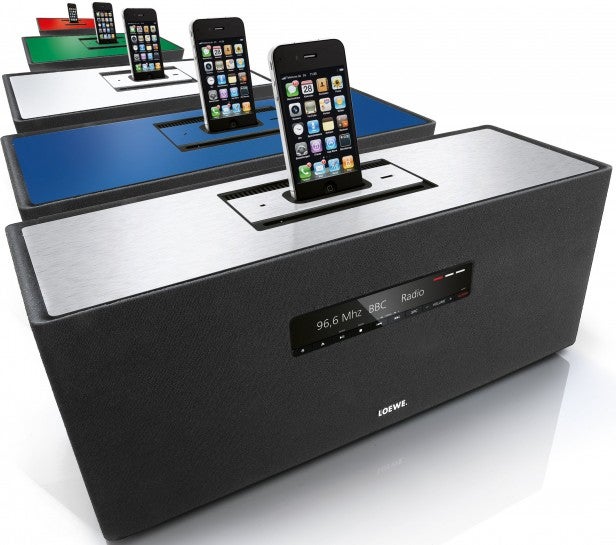 Interestingly Loewe continues its trick of using proprietary universal remotes and the Soundbox remote can also control Loewe TVs, DVD and Blu-ray players. As such the Soundbox remote is as big as one for a TV and contains a lot of additional functionality such as EPG and PIP (picture-in-picture) buttons, record controls and more. This is handy if you already own Loewe equipment, but unnecessarily complicates usage if you don’t.

What about the beating heart of the Soundbox? Loewe is Bose-like in its secrecy so all we are told officially is “two four-inch, full-range speakers and twin digital stereo amplifiers give the Soundbox a rich, powerful sound.” This isn’t overly useful (though admittedly neither are output powering ratings, typically), but we were able to confirm the Soundbox essentially uses a 2.0 speaker arrangement as opposed to a 2.1 setup. This is somewhat unusual for a premium dock, so how does it fair?

Loewe describes the Soundbox as rich and powerful, but unfortunately we found them to be bywords for muddy and muffled. The Soundbox does pack a punch, easily filling a large living room or entertaining a moderately sized house party, but it cannot quite reach the levels of the B&W Zeppelin Air, Sound Freaq Sound Stack or (post firmware updated) Arcam rCube. 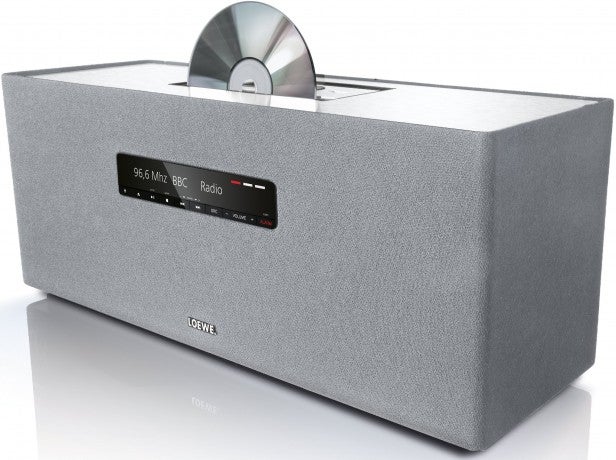 Less pleasing is how the Soundbox delivers its audio. Bass is both overcooked at low volumes, drowning out detail, and underwhelming as levels are cranked up. Furthermore stereo separation is limited and there is a severe lack of detail with many nuances lost. Yes the Soundbox is a perfectly adequate boom box, but that isn’t the market Loewe is targeting judging by the price tag.

Loewe sells the Soundbox for £449, £50 less than the (AirPlay equipped) Zeppelin Air and £100 and £150 more than the (Bluetooth equipped) Sound Stack and (Kleer lossless and battery equipped) rCube respectively, and it cannot hold a candle to any of them. Rather than being a premium dock with differential design, sadly the Soundbox is a middle of the road dock in upmarket attire. The CD functionality may still attract some, but the brutal truth is CDs on the Soundbox don’t sound any better than MP3s on these rival products and consequently the benefit is lost.

The good news is Loewe has big plans for the dock sector with the promising AirPlay enabled Air Speaker hot on the heels of the Soundbox. We’ll accept the Soundbox as part of a learning curve, but Loewe needs to understand style isn’t a differentiator in the dog-eat-dog market of docks… alongside pricing and performance, it is a prerequisite.

”’Verdict”’
The Loewe Soundbox may garner admiring glances, but this individualism is lost once the dock is switched on. An FM tuner and CD playback cannot compensate for bass which is heavy handed at low volumes yet lacking when cranked up. There is also a lack of clarity, even with CDs, and the omission of any form of streaming functionality puts it at a further disadvantage. As a result the £449 asking price buys you little more than brand recognition. Loewe has shown many times in the past it can innovate both technically and stylistically, but the Soundbox is an exercise in style over substance.