Right, let’s deal immediately with the rather sizeable elephant squatting slap bang in the middle of the room. For yes: Loewe’s 40in Individual 40 Compose costs £3,550. As a starting price.


The model we tested also had attached to it Loewe’s matching Sound Projector 7.1 speaker bar, costing a further £1,450. And it sat gracefully on a delightful chrome floorstand costing another £545.


All of this will immediately price it beyond the wildest dreams of many of our readers. And it will likely also stir into a frenzy the portion of our readership that apparently flat denies the right of any product to be expensive. 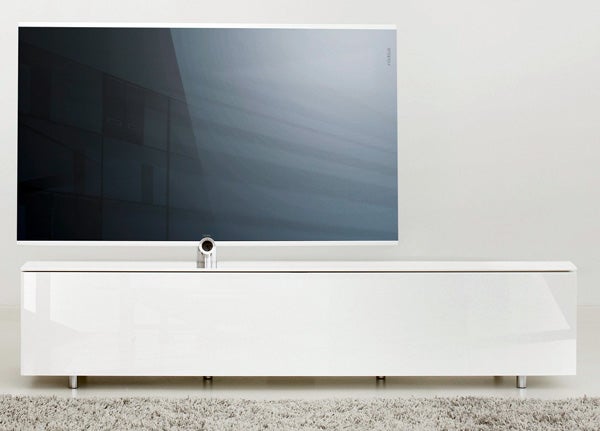 But this is actually the last time we’re going to mention the set’s price in this review. For the bottom line is that the Individual 40 Compose is a uniquely stylish, fearsomely specified and above all startlingly good TV that wouldn’t exist if it wasn’t made for the ‘money’s no object’ crowd. It’s out to be a high-end BMW or even a Porsche for the TV world. And we personally don’t see anything wrong with that. On the contrary, it would surely be a very grey and boring old TV world if you didn’t have a brand or two wanting to deliver a completely different kind of TV experience.


The design of the Individual 40 Compose configuration we tested really is spectacular. Our model came dressed in high-gloss white, with the white finish running along the top and bottom edges of the screen’s bezel, and all over the TV’s ultra-slim rear. The 7.1-channel sound projector fixed beneath the screen also sports a white grille, with white trim and white rear. As for the pole-style floor stand, it’s a gleaming vision in chrome, and can hide all your cabling up its centre. 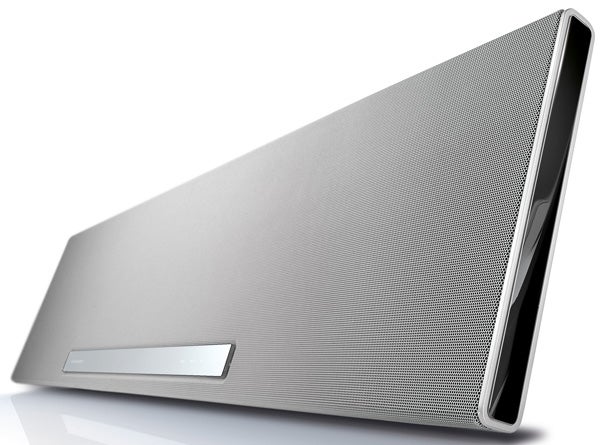 Then there are the shiny aluminium silver panels down the sides of both the TV and the sound projector. These are very pretty, but if they’re not to your tastes they can easily be swapped out for different panels in chrome, ribbed chrome, Chrome Microstructure, ebony, light oak, high gloss black… or pretty much any colour you fancy, actually.


The TV can come in Aluminium Black or Aluminium Silver finishes as well as the white, meanwhile. And it can be mounted on all manner of different stand options, including some genuine ‘furniture’ designs. And it can come with a series of different speaker options, including a slimmer speaker bar than the Sound Projector we’re testing, and full matching 5.1 systems. And you can even decide to some extent what level of internal specification and features you want your Individual 40 Compose to have.


Add to all this a super-slim, edge-LED driven screen profile and a build quality that really is second to none and the Individual 40 Compose represents 360-degree design at its best, with peerless bespoke flexibility thrown in for good measure.


You only have to start thinking about the enormous logistical effort required to support all the Individual 40 Compose’s various design and feature options to appreciate just why such products don’t come cheap. And yes, we know we weren’t going to mention price again. But, well…


The Loewe’s connections are inevitably complicated by the fact that it has to accommodate numerous audio and stand options, and even potential integration within a Loewe multi-room system. But focussing on the only stuff that really matters given that anyone buying a Loewe TV/AV system will have it installed for them, we find the Individual 40 Compose’s main chassis carrying a satisfying three HDMIs, an Ethernet port, two USBs, and a PC input.

Turning to the Individual 40 Compose’s bulging spec sheet, there are a number of headline tricks to report. Perhaps the single most impressive of these is the presence of an integrated digital recorder. And this is no half-hearted ‘add-in’ like the 8GB effort built into some of Sharp’s recent TVs; this is a 250GB affair with an fully developed operating system and the ability to record – in HD or standard def – from the integrated digital tuners with no loss of quality.


The full HD pixel count, meanwhile, is powered by plenty of processing power, with the latest version of Loewe’s previously impressive Image+ picture engine being joined by 400Hz, for crisper, smoother motion handling.


The set’s edge LED lighting is reckoned to deliver a very promising 5,000,000:1 dynamic contrast ratio, while also crucial to the Individual 40 Compose’s appeal are its extravagant multimedia talents. It’s able to connect to a DLNA PC, for a start, from which it can stream digital music, photo or film archives. The same sorts of files can also be played back from USB drives. Best of all, though, the Individual 40 can go online, allowing you to access more than 8,000 Internet Radio stations, as well as Video podcasts and ‘web TV’ channels.


Loewe announced at the recent IFA show that it had signed up with Sharp and Philips to share online platforms, which suggests that at some point open Internet access could come to Loewe’s TVs too. 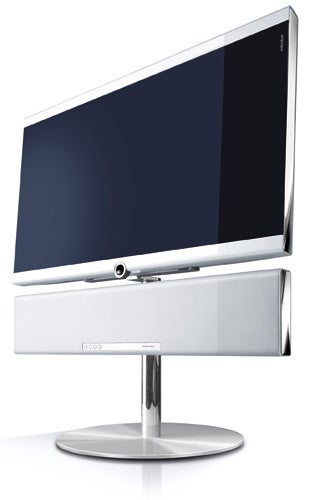 We really liked the way Loewe’s online features were organised as well. The menus don’t look very flash compared with the graphics-heavy approach of some rivals, but the almost PC-like approach proves exceptionally efficient at organising and presenting the huge amount of content the system is capable of delivering.


Loewe bolsters its user-friendliness by including a genuinely helpful onscreen, interactive ‘instructions manual’. However, not everything about the Individual 40 Compose is a no-brainer. For we’re not big fans of the way the TV keeps all its onscreen menu options within a couple of collapsible, scrollable lines along the TV’s bottom edge. It makes finding and getting to pretty much any of the TV’s options a real chore.


There was one further glaring issue with our Individual 40 test sample, too: no Freeview HD tuner. However, thankfully this is going to be rectified before the end of the year. Phew.


Previous Loewe TVs we’ve seen have tended to be less appealing in performance terms than they are in design and feature terms. But the Individual 40 Compose puts this traditional failing right in no uncertain terms.


With dark scenes and dark parts of otherwise bright pictures also exhibiting clear signs of the subtle shadow detail often crushed out by lesser LCD TVs, Loewe is now up there with the best Sony and maybe even Philips have to offer on the edge LED contrast front.

It’s also great to see the new Individual’s pictures looking much sharper than those of previous Loewe flat panels. The main reason for this is that motion blur is very well handled/suppressed, thanks to a combination of the screen’s native response time and the 400Hz processing engine.


Sometimes this processing can generate side effects, such as blurring around the edges of moving objects. So we wouldn’t recommend that you use it with all types of source material (it should definitely be avoided with console games, as it also makes pictures feel unacceptably laggy for gaming). But neither would we recommend that you just leave it turned off permanently, as it can be helpful for much of the time.


The latest Individual 40 also hits all the right notes with its colours, combining intense, vivid saturations with a more consistently natural tone than we’re used to seeing with Loewe flat TVs – or flat TVs generally, come to that. What’s more, these tones aren’t just great with high definition; they also retain most of their realism when you switch to standard definition. 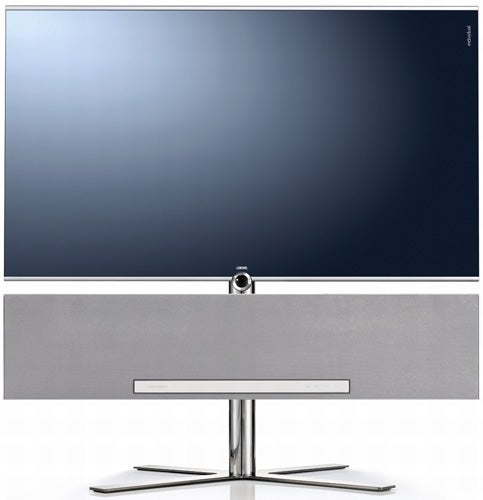 Loewe’s upscaling engine for standard definition is impressive too, achieving decent additional sharpness and detail while also keeping a lid on noise levels. The only bumnote in the Individual’s processing suite, really, is its noise reduction system, which softens the picture too much for comfort.


If the Individual 40 Compose’s pictures are excellent, though, the audio from the Sound Projector’s 42 integrated ‘mini speakers’ is nothing short of spectacular. For starters, the sheer volume and dynamic range it can reproduce is so far ahead of the puny sound usually produced by flat TVs that it’s frankly hilarious. You can pump the volume way higher than your ears would realistically want you too without a trace of distortion or harshness setting in, and the bass levels the speaker can turn out had us looking behind the sofa for an extra subwoofer we thought the Loewe installer must have tucked away while we weren’t looking. (He hadn’t.)


Treble information is clear and accurately positioned in the soundstage without sounding sibilant, either, and last but by no means least, the sound projector even immerses you in a genuine all-round sound, despite there being no rear speakers.


To be clear about this, the Sound Projector’s surround sound performance doesn’t have the spatial accuracy you’d get with a proper, 5.1 speaker array. But there’s definitely a sense of at least ambient audio coming from behind you, and a far greater sense of being enveloped in the world of a film than you’d ever get with even a good set of normal TV speakers. In fact, we’ve heard separate, dedicated home cinema sound systems that don’t produce as satisfying a sound performance as Loewe’s Sound Projector.


Before we spent quality time with Loewe’s new Individual 40 Compose, we thought we knew what we were going to get. Namely a gorgeously designed slice of likeable if eccentric German AV, brimming with ideas but slightly off the pace in performance terms.


By the time our review was completed, though, our attraction to the set had run much, much deeper than merely falling for its exterior beauty. Loewe can now be placed among the AV ‘A list’ in performance terms too, and its approach to multimedia is both inspired and ahead of its time.


In short, we hate the Individual 40 Compose. For the addition of genuine AV performance quality to Loewe’s traditional luxurious, opulent, feature rich ethos has made us feel even more sick about not being wealthy than we were before. Grrr.