Loewe’s unique aesthetic flare and penchant for providing everything but the kitchen sink on the features front means that any TV from the German company has a tendency to make the most fancy of its rivals look positively ordinary by comparison. So when Loewe itself decides to call one of its TVs ‘Individual’, you can’t help but expect something really special.


And as soon as you get the 32in LCD Individual S 32 out of its box, you sense that special is exactly what you’re going to get. For it is quite simply one of the most uniquely attractive TVs ever. And that’s even before you set about customising it…


The heart of its design appeal comes from the boldness of its core colour contrasts, as the metallic sheen of the top and bottom edges of the fascia is dramatically offset by the deep black of the left and right sides. The cunning little gap between the screen and the speaker section underneath is cool as you like too. 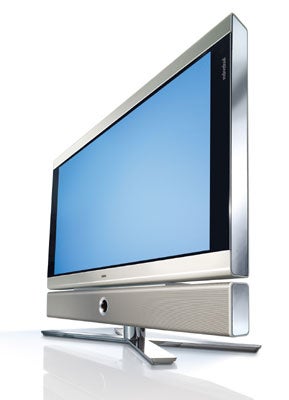 But amazingly this is just the start of the Individual’s aesthetic delights, for more or less uniquely in the ‘mainstream’ TV world the Individual set can change aspects of its appearance to suit your individual tastes and décor. For instance, the metallic parts of the fascia can be had in one of two hues: Chrome Silver or Anthracite.


You can also choose from a variety of equally stylish but all very different mounting options, including a ceiling-hanging pole, a floor-to-ceiling pole, a pole floor mount, a standard four-legged desktop mount, and our personal favourite, a sumptuous ‘monolith-style’ floor-stand on a rotating base.


And still there’s more, for remarkably the Individual also lets you add a variety of simple ‘clip in’ inlay panels to the TV’s sides. Options available include ‘real woods’ like ebony, rosewood, and light oak, plus a selection of glossy ‘synthetics’ including high gloss black, ruby, orange and apple green.

It’s not just the Individual’s looks that can be to some extent customised, either. You can also opt for one of two different feature options for the set: one standard Freeview version with a digital tuner built in, and a version with an additional 80GB PVR built in!


Add all these multifarious options up and you’ve got something genuinely approaching a bespoke TV. The Individual name tag thus now becomes not so much a reflection of how different the TV is from its competitors as a reflection of how every separate Individual set sold can have its own distinctive appearance depending on the tastes of the customer who buys it. 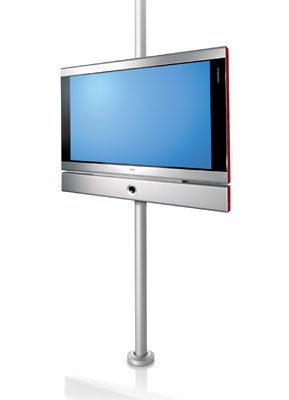 The first sign of any mundanity with the Individual 32 S comes with its connections, as we uncover just one HDMI, just one set of component video jacks, and just two SCARTs when we’d ideally like to see at least one more of each. Still, the fact that the set carries a digital tuner perhaps compensates to some extent for the missing third SCART, and there are at least also a PC input and a centre channel audio line input.


Before we get into how the Loewe’s pictures shape up, we ought to briefly cover something the set carries that will hopefully make those pictures better: Image+ processing. This new Loewe development uses a number of tricks to boost contrast, colour and sharpness. For contrast the set dynamically adapts the luminance characteristic curve based on the picture content, enhances static black and whites, and recognises and applies special handling to skin tones.


For colour the set stretches the blue and green colour elements, and again looks for and adapts to skin tones. And finally for sharpness the set offers adaptive line transient improvement, adaptive white peaking, and adaptive colour transients.


Basically, it’s all about recognising different aspects of different parts of a source picture and adjusting the type of processing applied there accordingly.

There are plenty more features on the Individual 32 S, but it’s really high time we got into its performance – right after, that is, we’ve had a bitch about how tricky the TV is to use thanks to some cramped onscreen menus and a phenomenally fiddly remote control.


Just as well that the Individual’s performance is good enough to make us willing to grin and bear the remote. Pictures, for starters, are fabulously sharp and detailed. This obviously makes the set a particularly close friend of high definition, but it also does a better job of sharpening up standard definition than most rivals.


Colours are pretty tasty too. Earlier Loewe LCD TVs have shown a tendency to portray skin tones with more than hint of unnatural green to them. But the efforts of Image+ correct most, if not all of this problem, as well as helping colours elsewhere look rich and three-dimensional. 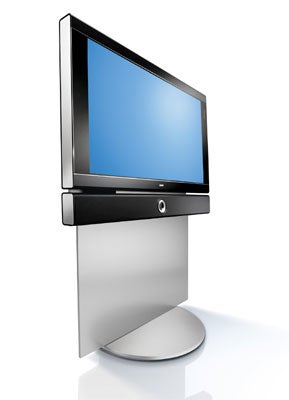 Dark areas of the picture look reasonably full of subtle detail and depth, meanwhile, and the picture is impressively short of most sorts of video noise, be it grain, dot crawl, or LCD’s common motion smearing problems.


A couple of issues pull the Individual’s picture up short of perfection, though. First and worst, although dark areas contain some decent sense of depth and shadow detail, they also look a little greyed over compared to some rivals. Second the picture can look a touch over-processed with weaker, standard definition sources.


Loewe sets generally impress sonically, and the Individual 32 S is no different. In fact, the amount of sheer power delivered by its speakers is outstanding, especially as it’s accompanied by deep bass, perky trebles and rich, clear dialogue without the slightest trace of distortion.


There’s no getting round the fact that the Individual 32 S is expensive for a 32in LCD TV. But then how many other TVs do you know that can accessorise their looks to suit your décor; have features galore; produce good pictures; and sound better than many a hi-fi we’ve come across? Thought so…