For years now TV manufacturers have been banging on to us about ‘convergence’. By which they mean the growing closeness between the worlds of the TV and the PC. Yet to be honest this promised land of ultimate, ‘do everything’ home entertainment centres hasn’t come to fruition to quite the extent we might have hoped.


One or two manufacturers have had a stab at it; Philips had a TV with an Ethernet port a year or two back, and quite a few sets now have USB ports or SD/MMC slots for playback of digital stills and, sometimes, MPEG movie and MP3 audio files. Some have even gone the whole convergence hog with a built-in Windows Media PC, such as Elonex’s Lumina, Sony’s VGC-LT1S.CEK, and Vivadi’s Saturn HD50 – the latter setting you back many, many thousands of pounds. 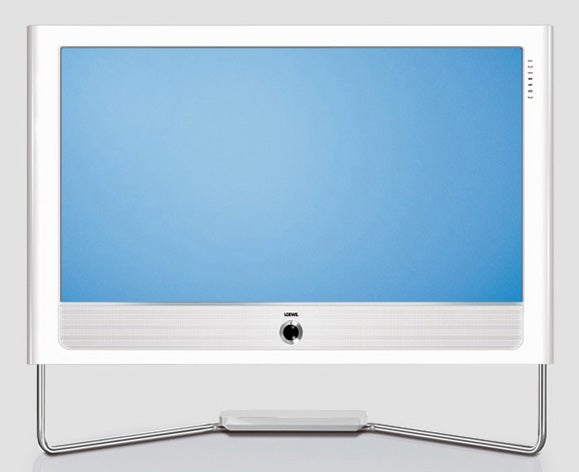 But now another brand has emerged that seems hell bent on taking today’s multimedia world seriously: Loewe. This German outfit has a long and distinguished history of being at the cutting edge of technology and design, and that history arguably seems to culminate in the Loewe Connect 37; a TV which, as its name suggests, can become a portal to playback in your living room of any multimedia files you may have on any PC around the house.


What’s more, you don’t even have to use cables to make this possible. For while the TV does indeed carry the inevitable Ethernet port, it’s also got Wi-Fi capabilities built into its stunning frame. All you need to do is set up your PC to ‘talk’ to the TV, and you’ll be able to navigate and play all your PC-based MP3 and JPEG files through the TV. Neat.


Or at least it’s neat when you finally get it working. For unless you happen to have a Windows Media PC, there’s a good chance that you or, hopefully, your installer (Loewe TVs are generally installed by professionals) will spend a good hour or two – or more! – getting your computer system and all the relevant files on it recognised by your TV.


Still, once the seemingly inevitable teething pains have been sorted out, the system really does work very well. It’s bizarrely thrilling to see your digital photos streaming wirelessly through to the TV, especially as the TV shows them in wonderful high resolution. It’s worth adding, too, that the Connect 37 permits you to simultaneously stream music and images from your PC, so you can watch your pictures to the accompaniment of your favourite tunes, as if you’d gone to the bother of putting together a proper multimedia slide show.

Having established the Connect 37’s impressive multimedia credentials, we should really turn our attention to its equally unique looks. With convex side panels; a stunning finish available in High Gloss Black, High Gloss White or Matt Chrome Silver; ridiculously sleek and minimalist lines; and all manner of different but equally fancy mounting options, it truly is a sight to behold. And needless to say it’s absolutely tailor-made for the style-conscious premium market it’s aimed at.


Loewe has often told us that it wants to be perceived as the BMW of the TV world, and with the looks and sophistication of the Connect 37, it gets closer than ever before to making that dream a reality. Here’s hoping it completes the job with a ‘cut-above’ performance too.


Before we get into that, though, we’ve still got a number of pretty important other features to cover. For starters, for an extra £200 you can actually buy an optional version of the TV with a built in ‘DR+’ 160GB hard disc recording system, complete with multiple picture quality options.

Then there’s the TV’s carriage of Loewe’s impressive proprietary image processing system, Image+, designed to improve motion, detailing, noise levels, colours and contrast. Plus you get full support for Blu-ray’s 24p picture format, and even a USB jack among the connections to support its multimedia pretensions even more.


All is not quite as we’d like on the connections side of things, however, for the set only provides a pretty paltry two HDMIs; hardly the sort of provision we’d expect of such an otherwise forward-thinking TV.


Wrapping the features up are a couple of slightly hit and miss specs. A ‘hit’ is the screen’s Full HD resolution. A potential miss is the claimed 5,000:1 contrast ratio, which looks slightly lame when compared with the figures of 30,000:1 and more now coming from other big brand LCD TVs. Of course, though, as ever we should point out that quoted contrast ratios are notoriously unreliable, so we won’t put too much store in the 5,000:1 figure unless we see some black level problems during our tests.


Day to day use of the Connect 37 warrants a mention next because, frankly, it’s a bit of a pain. The remote control is nice, and there’s a really clever interactive onscreen instructions manual. But the layout of the onscreen menus is ridiculously convoluted and hard to figure your way round. I think the idea was that Loewe wanted the menus to cover as little of the screen as possible, but this has led to an absolute nightmare of tortuous, hidden-away sub-menus that had me cursing every time I had to go into them.

Finally finding our way into the Connect 37’s picture quality, we find images that occasionally look spectacular, and are seldom less than ‘good’.


Their strongest suit is the amount of detail they manage to resolve with a high quality HD source. Fed Tim Burton’s ”Sweeney Todd” on Blu-ray, for instance, the Connect 37 does a great job of revealing just how much work has gone into the film’s recreation of early Victorian London, with the textures of clothing, background walls and ready-for-shaving beards looking absolutely pristine. What’s more, this impressive sharpness does not come at the expense of accompanying noise, such as grain or over-stressed edges.


Given what a predominantly dark film ”Sweeney Todd” is, it was also good to see the Connect 37 delivering deeper black levels than its 5,000:1 contrast ratio claim had led us to anticipate. The gut-churning scenes in Mrs Lovett’s basement benefit from less greying over of the darkest corners than we still often see in the LCD world, and there’s just enough shadow detailing around to pick out little details here and there that frankly you probably wish you’d not seen! 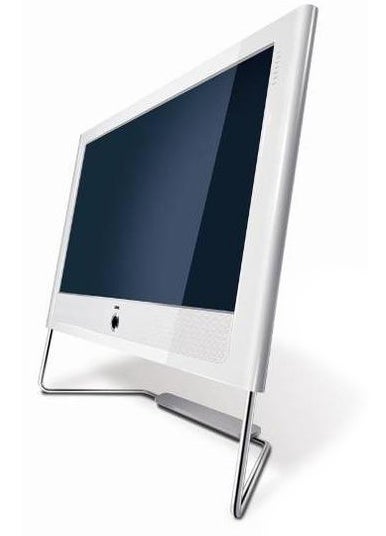 The final positive thing about the Connect 37’s pictures is their colours. For even though ”Sweeney Todd” is hardly the most colour-rich film in the world, the Loewe set really blazes out with outstanding intensity what colours the film does show, such as Mrs Lovett’s fantasy of her future life with Todd, or, of course, the copious amounts of blood that fly all over the place at regular intervals.


I should add in here, too, that the recordings from the DR+ system tend to be very good. Using the highest quality setting, in fact, I struggled to spot any significant difference between the recordings and the original broadcasts.


So how come the TV only scores an 8 for picture? Well, first and foremost the processing used to reduce motion blur unfortunately causes a problem all of its own, namely a tendency for really fast pans or objects to flicker a little, as the TV’s processing struggles to keep up with what’s happening. The other main problem is that for all their impressive vibrancy, I wasn’t always totally convinced that the Connect 37’s colours looked 100% natural in tone, especially where deep reds are concerned.


I should probably also add for consistency’s sake that while good by LCD standards, the Connect 37’s black levels are no match for those found on a good plasma TV.


No such reservations need trouble us when it comes to the Connect 37’s sound, though. So powerful, dynamic, rich and expansive is the soundstage it creates that at times it had me convinced that I’d accidentally left my surround sound separates system switched on during the test – but no, it’s simply the Loewe’s astonishing speakers putting those of almost every other flat TV brand to shame.


In terms of design and features, Loewe’s Connect 37 is a truly unique proposition that should deservedly win a devoted premium-buyer following. But picture quality obsessive that I am, I can’t quite bring myself to give a whole-hearted recommendation to a TV that only scores 8 for pictures despite costing roughly double what you’d have to pay for a ‘mainstream’ 37in LCD these days.