Aside from their ever-decreasing thickness TVs have been stuck in a styling rut for a few years now. Unless you spy the logo, you could be watching on any modern flat-panel – and that’s clearly been bothering Loewe…

The German company teamed up with London-based designer Bodo Sperlein last year, with the result being the stunning bild 9 concept shown off at IFA 2016. The reception it received at that annual Berlin techfest has meant the bild 9 has actually gone on sale – with its jawdropping styling unchanged. 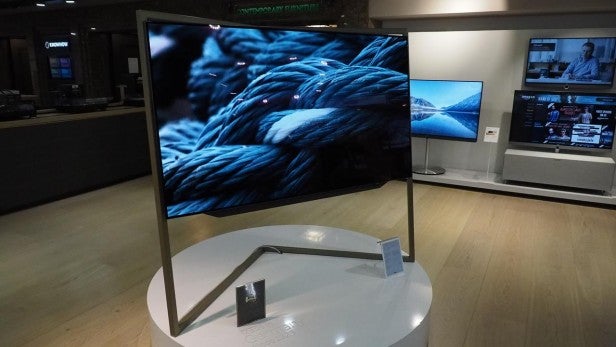 What gives the bild 9 its striking aesthetic is the stand. Or, rather, stands, as there are three options, with a wall mount, tabletop stand and the floor stand I got to take a look at in Harrods, where it’s for sale exclusively.

Loewe wasn’t taking half measures, either, showing off the larger 65-inch panel (£8990) – a 55-inch is also available for £6990. The floor stand was also in ‘amber gold’ rather than the less look-at-me ‘graphite grey’ finish. It was Harrods, after all.

The photos don’t really do justice to just how imposing this telly is. A 65-incher is never going to be subtle, but the angular floor stand turns it into a sizeable slice of industrial sculpture. It’s a mighty 141cm tall and 151cm wide, with a front-to-back depth of 65cm. Still, the triangular base at least helps it nestle into a corner…

Designer Bodo Sperlein took inspiration from the Bauhaus and Art Deco movements of the 1920s to craft a stand unlike any other you’re likely to have seen, but with practicality in the form of a tubular structure that means the TV’s cables can be routed neatly through it and out of a hole at the bottom. 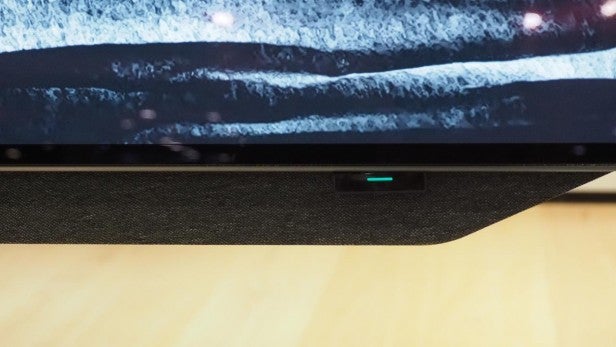 Turning the bild 9 on causes the whole screen to rise majestically by a couple of inches, revealing the integrated 120W soundbar beneath. The soundbar’s fascia is covered by a grey cloth grille that, combined with its relative slimness, makes it surprisingly subtle – much like the one on the Loewe bild 7. Beneath that grille are six drivers and four passive bass radiators.

You can choose to lock the bild 9’s screen in the up position if you’re not too bothered about that butter-smooth motorised slide action, but really, where’s the fun in that? When you’ve splurged the cost of a new Dacia Duster SUV on a telly, you might as well enjoy those premium perks.

You can see that mechanism in action, and the other mounting options, in Loewe’s promo vid:

The OLED panel is, unsurprisingly, made by LG and at its upper edge is just 7mm thin. It’s 4K/UHD of course, and supports three flavours of HDR in the form of HDR10, Dolby Vision and HLG.

Around the back is a large, grey fabric cover that’s held on by magnets and keeps everything looking neat, hiding the socketry. Pop it back and you’ll find four HDMI ports, three USB sockets, a micro AV port and an Ethernet connection. Wi-Fi and Bluetooth with aptX are built in, because, well, this is 2017. 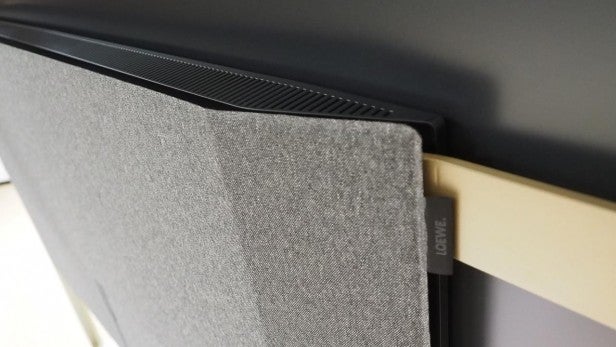 The bild 9’s smart TV interface is Loewe’s own very tasty Linux-based system. You also get a 1TB hard drive for recording from the TV’s built-in Freeview HD tuner.

I only got to see a limited loop of demo footage, but it looked to exhibit the sort of traits we’ve come to expect from modern OLEDs. Blacks looked inky, colours popped and the detail was just stunning. Hopefully we’ll have a full review unit around June time, so we’ll get to see how it compares with Sony’s astonishing KD-65A1. 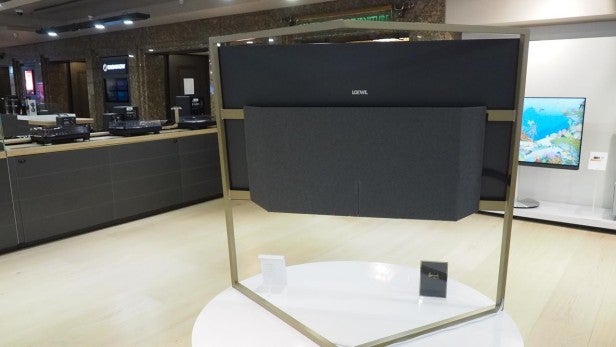 Sadly the optional matching klang 9 speakers (£4990) weren’t available for a look or listen. Apparently they’re active models that connect to the bild 9 wirelessly, and contain an array of drivers in a D’Appolito configuration.

You can just add a klang 9 pair for stereo music (and 3.0-channel TV audio alongside the bild 9’s soundbar), or go all-out with another two for surround sound. Hell, why not add one of Loewe’s subwoofers for 5.1? 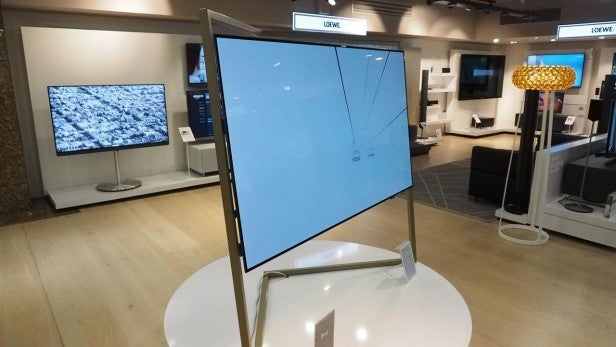 The Loewe bild 9’s styling divides opinion, but personally I love it. Whether that striking industrial-chic design and the integrated soundbar necessarily warrant a cost that’s nearly £4000 more than the same-sized Sony A1 model is another matter. If you’re already considering spending £5000 on a telly, though…

Look out for a full review in a couple of months, when we’ll put the bild 9’s picture and sound through its paces (and gawp at that screen motoring up and down a few hundred times).