The latest IFA technology show in Berlin has given us not one but two extraordinary reminders of just how amazing OLED TVs can look.

For starters, its 7mm-deep frame is opulently made from aluminium with a premium-looking matte-grey finish. As usual with Loewe, you can customise the TV’s appearance. There’s a choice of dark or light grey fabric for the soundbar that sits beneath the screen, and for the magnetically attached rear cover that hides all the TV’s sockets. 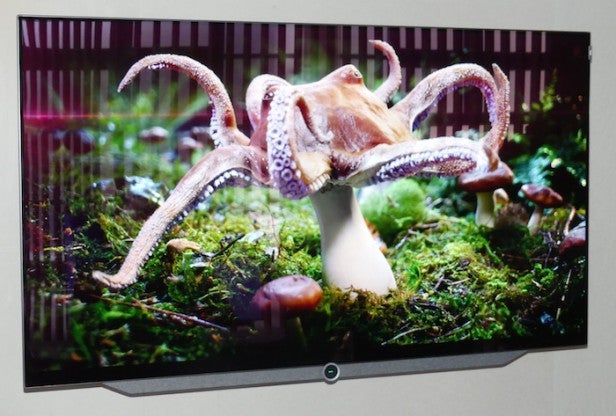 You can even choose whether you want the soundbar to be visible. Press a button on the remote control, and the TV retracts the soundbar using a gorgeously smooth motor system.

I wouldn’t hide the speaker away, though. Its finish and shape enhance the design in my eyes, while its huge built-in 120W of power – twice the power of the soundbar attached to LG’s flagship G6 OLED TVs – surely deserves maximum freedom.

The Bild 7 can also be integrated wirelessly with one of Loewe’s external 2.1, 3.1 or 5.1 speaker solutions. These include the option of huge cylindrical floorstanding speakers with felt covers to match the TV.

The retractable soundbar isn’t the only motorised feature in the Bild 7’s design. If you use the pole-style floor mount or wall mount, you can also rotate the TV via the remote to face different points in your living room. 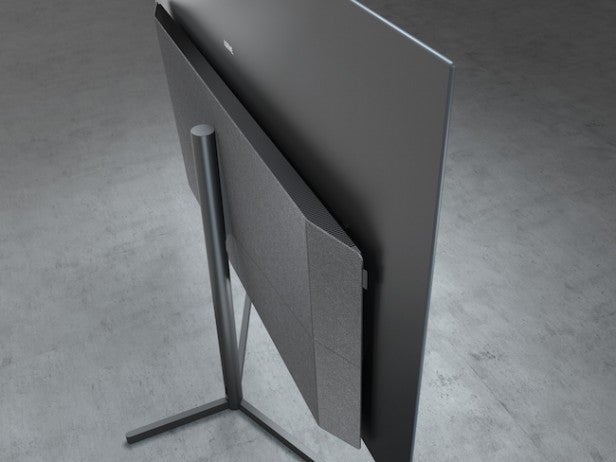 The Bild 7 doesn’t skimp on picture features, either. Particularly eye-catching is its support for the Dolby Vision HDR system as well as the more common HDR 10 standard. This makes Loewe only the second brand in the UK to support Dolby Vision.

Smart features come courtesy of Loewe’s own attractive interface, complete with an easy-to-set-up ‘favourites’ system. You even get a 1TB (optionally upgradable to 2TB) built-in hard drive for recording from the integrated Freeview HD tuner.

Loewe didn’t have a particularly wide variety of content running on its Bild 7s at the IFA show, but it was still possible to see from the mixture of concert footage and a rather weird Dolby-created ‘sci-fi nature’ clip that the Bild 7 is another chip off the OLED block in picture quality.

Black levels look intense and gorgeously deep. Colours look radiant but also full of finesse and tonal subtlety. Detail levels leave you in no doubt you’re watching a native UHD TV. Motion actually looks cleaner than it does on LG’s OLED TVs, too.

With Dolby’s nature clip there appeared to be a better sense of clarity and depth from the Bild 7, too. However, until we get one in for review, it’s impossible to say if this was down to better processing from Loewe or the quality of Dolby’s work in creating the Dolby Vision footage. 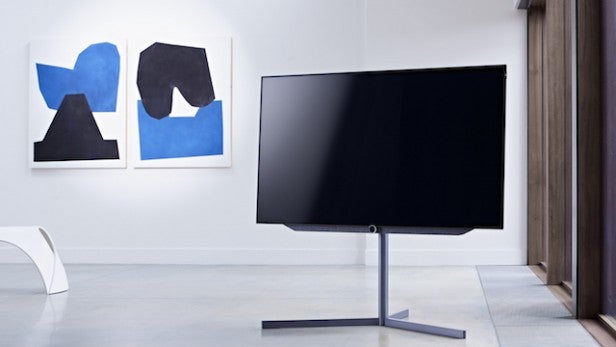 The only problem I had with the Bild 7’s pictures at IFA was the appearance of some pretty aggressive reflections on its glassy screen. Though, to be fair, Loewe’s show stand was more affected than most by both natural and artificial light sources.

The demo material I was shown was also limited in audio terms. For instance, there were no action movie clips to help me form an idea of its bass handling or sonic attack. The rich classical concert footage that Loewe’s stand representatives helpfully cranked up for me, though, revealed an outstandingly open, rich audio tone from that soundbar, as well as enough sensitivity to keep detail levels high as the music ebbed and flowed.

The built-in speaker also held its own remarkably well when used as a centre between a pair of Loewe’s huge floor-standing external speakers.

Clearly no TV range with a starting price of £4,490 will ever go truly mainstream. First impressions of the Bild 7, however, together with the general buzz surrounding it among IFA attendees, make it the most exciting TV Loewe has ever made. This one may catapult the brand to new heights.