Hands-on: We try out Bild’s latest entries into the high-end TV market at IFA 2017.

Given the success Loewe enjoyed with its debut OLED TV, the Bild 7, it’s not surprising to see the German brand expanding its OLED range at this year’s IFA show. What is surprising, though, is just how far that expansion is spreading.

The previously-announced Bild 5 OLED TV, with its modular approach (various speaker options and designs are available), is set to arrive on our test benches at any moment. But Loewe has used IFA to show off two further models designed to make buying a Loewe-styled OLED more affordable.

The Bild 4 is up first and, in fact, it’s already arriving at Loewe dealerships. Its design is still uniquely Loewe, from its metallic black finish to its ultra minimalist desktop ‘foot’ and distinctive circular infra-red ‘eye’. 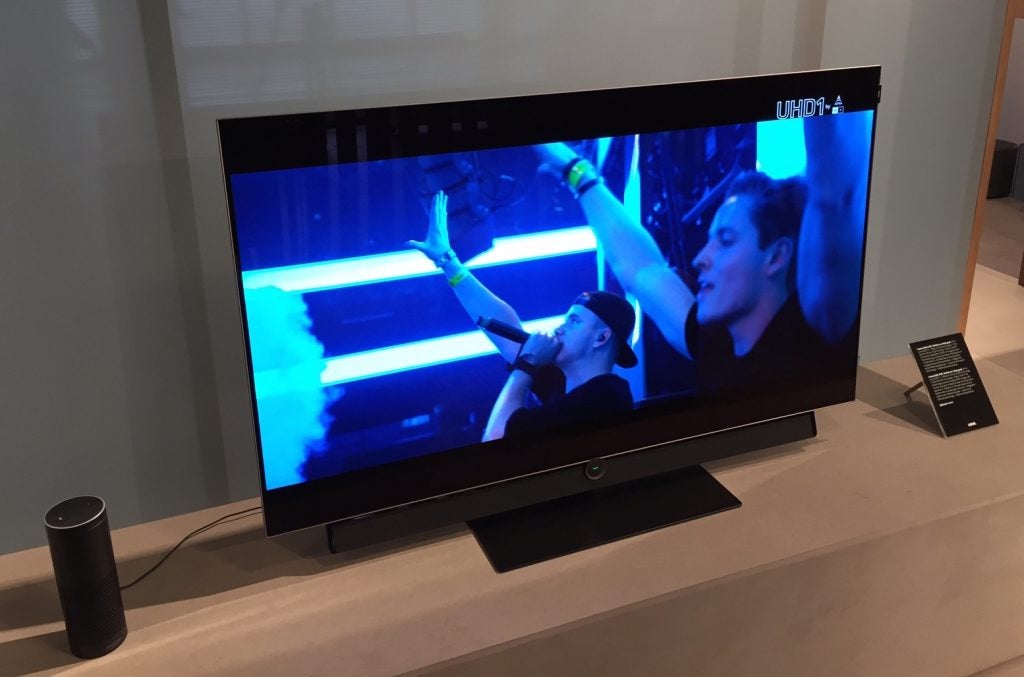 However, unlike most Loewe TVs, what you see with the Bild 4 is what you get. There’s no choice of stand design, and no choice of colour or speaker grille finish. Nor is there any of the swanky motorised stands you get with higher-end Loewe TVs.

The Bild 4 lacks another common Loewe feature, too: namely an integrated hard disk drive for recording from the built-in TV tuner.

Here’s the good news about the Bild 4, though. First, it still looks distinctive and actually rather lovely despite its uncustomisable, one-box design. Second, its design still incorporates a front-facing, 2 x 40W soundbar which, as far as I could tell from the less-than-perfect conditions of the IFA show floor, delivers more impact, power and clarity than the majority of integrated audio solutions.

The best thing about the 55-inch Bild 4, though, is that its picture quality appears to be close to if not actually indistinguishable from that of the brand’s stunning Bild 7, yet it costs far less: just £2990, to be precise. This excellent 4K, HDR picture quality even still extends to support for the premium Dolby Vision HDR format alongside the HDR10 industry standard.

Given how much picture, sound and design quality the Bild 4 seems set to deliver for what is by Loewe standards a remarkably low price, the last thing I expected to see at IFA was an even cheaper OLED model. Yet see it I did, and the Bild 3.55 looks set to potentially play an even bigger role in Loewe’s advance into much more mainstream living rooms than it’s generally targeted before. 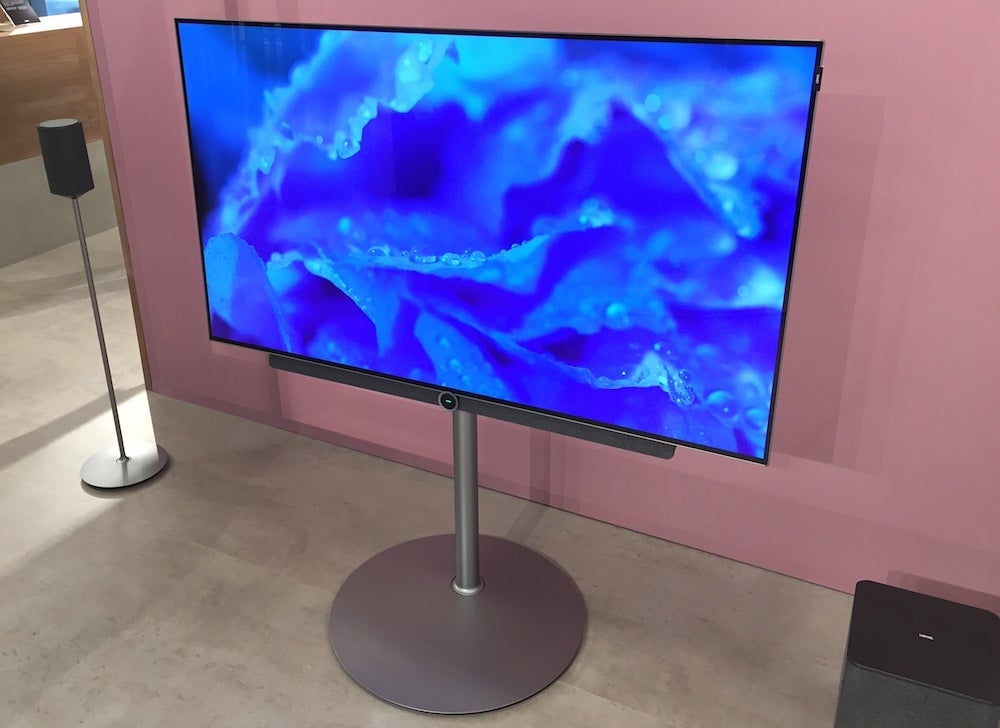 The Loewe Bild 3.55 is the brand’s cheapest OLED TV yet.

For starters, despite still delivering Dolby Vision support and a 55-inch OLED picture that appeared ,on the IFA show floor at least, to be indistinguishable from that of Loewe’s more expensive OLED sets, the Bild 3.55 will start from £2790 when it launches in October.

What’s more, unlike the Bild 4, this model actually supports a degree of modularity in its design, arguably making it a more truly Loewe product.

It can be placed on a selection of floor, desktop and wall mounting options, for instance. You can also buy it with or without both an integrated hard drive for recording from its Freeview HD tuner, and Loewe’s digital audio link system. This latter system lets you easily add extra Loewe speakers for a multi-channel audio experience.

The Bild 3.55 still manages to provide a forward facing and potent-sounding speaker hanging from its bottom edge, too, as well retaining a distinctively Loewe metallic finish and that trademark IR reception ‘eye’.

Loewe’s most affordable OLED TV yet isn’t actually the only TV featured in the newly announced Bild 3 range. There are also two smaller LCD models: the 49-inch Bild 3.49 and 43-inch Bild 3.43.

Priced from £2090 and £1690 respectively, these two LCD sets still look attractive and opulent with their mounting options and chic metallic finishes. However, they’re much chunkier propositions than the ultra-svelte OLEDs, and even under the glare of the Loewe stand lights it was easy to detect what looked like a pretty uninspiring black level and colour vibrancy performance compared with not just the Bild 3 OLED, but other more affordable LCD TVs we’ve seen this year.

Hopefully if I get my hands on one of these LCD models I’ll be able to tweak it into looking better than it did on Loewe’s stand. Even if I can’t, though, Loewe’s 2017 IFA showing (which was rounded out by some startlingly opulent concept designs based around LG’s ‘Wallpaper’ W7 ultra-thin OLED TV) has made it abundantly clear that the brand sees OLED as its TV future, not LCD. In fact, the 49-inch LCD model is now the biggest LCD TV on Loewe’s books.

Look out for full reviews of the Bild 3 and Bild 4 TVs in the coming months.