We recently looked at the ePens Mobile Notes, a digital pen that did away with ‘digital paper’, a significant advance over older devices like Logitech’s io. Today, however, we’re looking at the Livescribe Pulse Smartpen, which has reanimated this ‘feature’ as it works only with LiveScribe Dot paper.

This is because the Pulse Smartpen isn’t really about converting notes into text; Livescribe doesn’t even supply OCR software for this, though you can purchase software separately if you like. Instead it’s primarily about archiving and linking your written notes and recordings of lectures or meetings so that when you return to them, it’s much easier to recall all the information you need. In effect it’s a digatal dictaphphone and notepad in one, but where the notes and audio are all synched together instead of jumbled up.


In the box you’ll find the pen itself, in addition to a 100-page ruled ‘digital paper’ pad, a charging cradle and case for the pen, a headset, stylus nib and three spare ink nibs.


Compared to the ePens Mobile Notes, the Smartpen itself is in a different league of quality. Its thick, imposing body is made from classy, gunmetal grey anodised aluminium that not only makes it incredibly durable, but also lends a nice weight (36g) in the hand.

Its nib-holding tip is constructed using rugged matt black plastic, with glossy touches, while an OLED display adds to its impressive look and feel. Those with particularly small hands might find its bulky body less comfortable, but on the whole it looks the business and handles well, too.


A sheathe made of strong black faux-suede is also included. It fits the pen snugly, making it a far more practical proposition than the large cardboard case provided with the ePens. However, as with that peripheral, there’s no space provided for extra nibs. Moreover, unlike the ePens which conveniently had its nib extractor incorporated into its cap, here it’s integrated into the base. Still, this is not the problem it could have been since it’s possible to remove the nibs by hand.

Moving on to the base station, it acts as a charging cradle, data connection and control centre, connecting to either a PC or charger through USB. It’s solidly constructed and the pen slots into it effortlessly and securely thanks to a strong magnet, so you can carry the base around without the pen falling out. 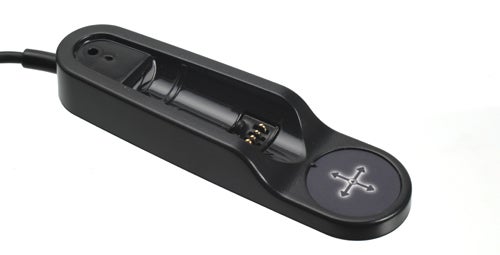 Last, though not quite least on the hardware side, we have what initially looks like a pair of cheap earphones. Though the audio they produce is expectedly mediocre, they are light and comfortable. However, their main feature is not to produce audio, but to record it. A microphone in each bud allows for binaural recording, or ‘3D’ as Livescribe terms it. They work very well too, picking up a conversation clearly from the other side of a noisy office with the correct stereo positioning.


There’s also a mono microphone in the pen, but although – like the inbuilt mono speaker – it’s impressive for its size, it obviously can’t match the dual ones in the headset. A major disadvantage is that though the pen sports a 2.5mm jack, this won’t recognise any devices except the proprietary set supplied with it, so you can’t hook the pen directly up to some speakers to let a whole room listen in on your recording. Likewise, you won’t be using the 3D recording headset with anything but Livescribe’s pen due to its proprietary plug. 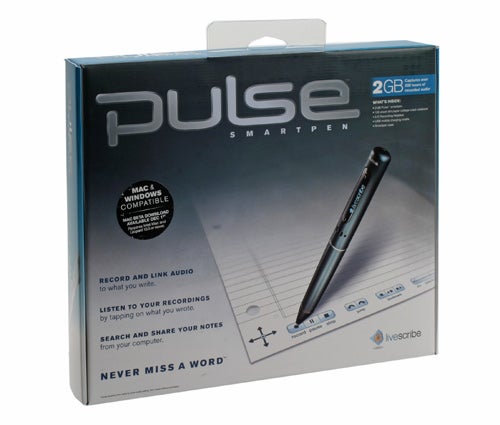 Also integrated into the pen is 2GB of non-upgradeable memory that’s good for around 200 hours of recorded audio, though this goes down depending on the selected recording quality. If that sounds like more than you need, there’s a cheaper 1GB version available as well.


However, the single biggest issue with the Pulse Smartpen’s audio capabilities is that the pen itself lacks any physical controls. Instead, to navigate tracks or change the volume you have to use the bottom of one of the specially-dotted pages from the included notebook, or you can take a slightly more circuitous route and use the menu controls on the base station. This is fine when using recordings in conjunction with notes, but is less convenient if just making a recording with no notes to reference.

In reality, though, recording lectures or meetings without notes misses the point of the Smartpen entirely. Key to this process is the notepad, which is comprised of 100 two-sided pages of ruled digital paper. Quite aside from the things you can write and draw on their surface, each page has a set of menu controls (four directional arrows and a home key) and track controls (including record, pause, stop, position, playback speed, and volume/mute).


Under the Settings menu, you can alter recording quality, microphone sensitivity, playback latency, menu voice (yes, the pen tells you what menu section you’re in for the main ones), display brightness, scroll speed, display orientation, and finally the date format. 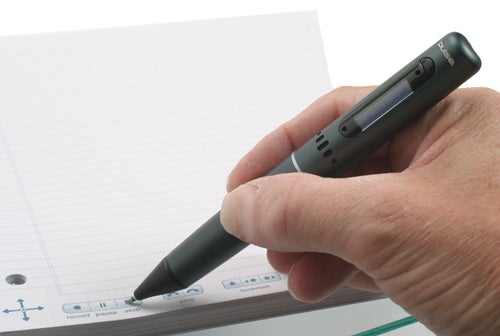 Meanwhile, the notepad’s front and back cardboard covers contain extra functionality. There are standard, scientific and financial calculators, a full QWERTY keyboard including special characters, all the settings mentioned in the previous paragraph as well as status indicators for time/date, remaining storage/battery life and software version.


Tapping any of these ‘buttons’ or icons worked flawlessly, regardless of speed – except for the paper keyboard, which the pen tells us (literally) is “coming soon”. You see, not only is Livescribe working on further applications (for which it is unfortunately likely to charge extra), but it has released a Software Development Kit (SDK) so that everyone with enough Java knowledge can get in on the action.

A great example of the potential and possibilities is the virtual piano. It might be gimmicky, but it was undeniably cool to draw an octave (eight notes) keyboard on a piece of paper and to then be able to play real notes on it, definitely something to impress your mates with. Writing the letter ‘i’ beside it allows one to change the instrument, while an ‘r’ on the dotted paper lets you add in a background rhythm.


Another neat example is the translator, which will translate a basic set of English words you write down (including hello, goodbye, please and chocolate – everything important covered then) into Arabic, Mandarin, Spanish or Swedish, displaying the word on its OLED display while pronouncing it clearly.

Of course the Pulse Smartpen’s core functionality remains recording audio and written notes simultaneously and linking them. At this it excels. Tapping any written word, symbol or scribble made while recording triggers playback of the audio representing what was going on at the time.


We can definitely see the appeal for the target student and business markets, since instead of furiously scribbling down a whole lecture or meeting you can just jot down the main points and then tap on them while revising to hear what the lecturer/presenter said on that specific topic. We found the 300mAh lithium battery lasted throughout our three-day testing, too, so you won’t need to charge your pen too often. 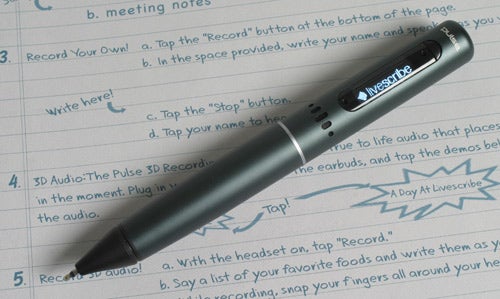 To archive your notes and recordings you’ll need the Livescribe Desktop software (for Windows XP, Vista or Mac), which must be downloaded as no software disc is provided. You should install it before connecting the pen to your PC and once recognised you can give your pen a name just like any other drive.


You can then choose to upload and delete ‘sessions’ using Livescribe Desktop, or even turn them into online videos. However, since the software doesn’t do Optical Character Recognition (OCR) conversion, you can’t transcribe your handwritten notes into word processor-editable ‘machine text’ – though you can get third-party OCR software to do this.


This deficiency is made stranger considering you can type any word into a search box and the software will unfailingly find it (it matched words with 100 per cent accuracy in our testing) in your handwritten notes, so there must be some form of OCR functionality. It’s a great pity Livescribe didn’t choose to include conversion by default, as this is offered by almost every other digital pen package on the market.

Essentially then, while its practical functionality is more limited than it should have been, thanks to its superb recording abilities and intelligent linking (not to mention future application potential) Livescribe’s Pulse Smartpen still manages to offer a unique and genuinely useful proposition in a crowded and relatively niche market.


However, it doesn’t come cheap – it’ll cost you nearly £150 for the 2GB model we reviewed here, with the 1GB model a slightly cheaper £120. At their very cheapest, flip notepads cost £10 in quantities of four, meaning you pay about 2.5 pence per page (1.25 pence per side). You also have the option to print your own dotted pages, though laser printers are recommended for this. Just keep in mind that you can’t use two identically-numbered pads, as the Smartpen isn’t smart enough to distinguish between them and will just ‘overwrite’ the older text and recording.


If Livescribe could lower the price a little or at least include fully-functioning OCR software, we would have no hesitation recommending this product. Even without these two things, though, this is still a potentially invaluable tool if you can afford it.


As digital pens go, the Livescribe Pulse Smartpen is an unusual proposition. Its focus on linking written notes and recorded audio is genuinely useful, even if the lack of OCR software and the high-price may put off some.