A bit over two years ago, Sony
released a little game called ModNation Racers on PS3 and PSP. The
unofficial spin on it was that it was LittleBigPlanet does Mario Kart,
mixing the user-generated content and community features of the former
with the high-speed, knockabout racing action of the latter. Developed
by United Front, It was an okay game, but it never caught the
imagination or made the sales of its inspirations, and this year’s Vita
version wasn’t a system seller, either. Perhaps that’s why, instead of a
sequel, we now get a game from United Front that makes explicit what
used to be implicit. LittleBigPlanet is LittleBigPlanet does Mario Kart –
and it’s close to being as brilliant as that sounds.

This is a
LittleBigPlanet game, with everything you might expect. It stars Sony’s
new favourite mascot, Sackboy. It has the classic handcrafted felt,
sponge and cardboard aesthetic, the quirky humour, and the ever-lovable
Stephen Fry voiceover. You can collect costumes, decorations and now
Kart parts or kits, and use them to customise both Sackboy and his
vehicle to your heart’s content. What’s more, you can create your own
tracks in a ridiculously simple editor, test them, play them, and share
them with the community at large. Basically, every feature you would
want in a LittleBigPlanet Karting game is there. 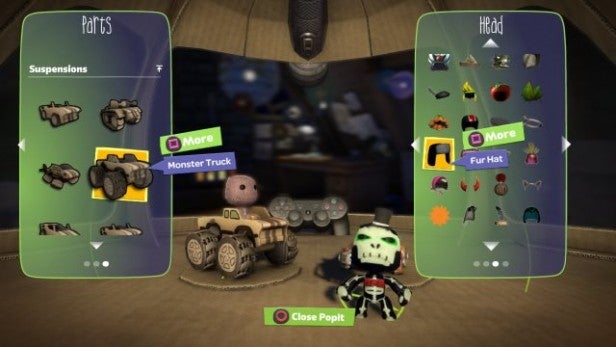 And while the
gameplay sticks pretty close to the classic Mario Kart formula, LBP
Karting actually has its own LittleBig twists to add. Some courses
feature spongy rollers you can grapple onto and swing from in classic
Sackboy style, sometimes to reach hidden routes, sometimes to bypass
massive gaps. There’s a full-scale story mode taking in several planets,
complete with improbable scenarios, bonkers characters and crazy
cut-scenes. You can play this single-player, or with up to three friends
in a split-screen mode, and the game allows drop-in, drop-out
multiplayer. 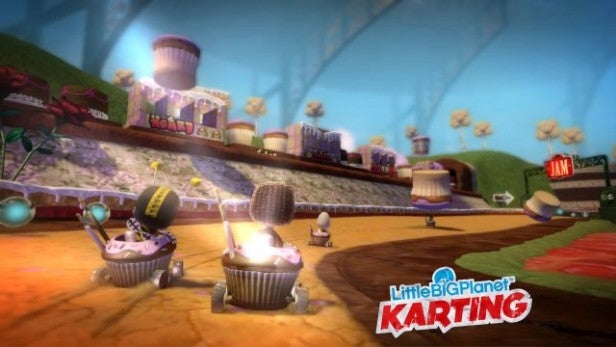 The weapons are all recognisable from Mario Kart or
WipEout, but entertaining for all that, with some nice examples like an
invincible boxing glove or rocket that you can ride on while smashing
through the competition. What’s more, LBP Karting mixes things up in the
campaign with other scenarios, that find you battling other racers in a
variation on Mario Kart’s old battle mode, fighting over a monster’s
egg with your grappling hook, or destroying a gargantuan caterpillar in a
weird, shoot-em-up action sequence. Too many Mario Kart clones think
that if you take the core Mario Kart gameplay, substitute your own
characters and scenery and keep things simple, you can still make a
great game. This is one mistake LBP Karting hasn’t made.

Meanwhile,
the create and community features are as good as you’d expect in a
LittleBigPlanet game. You literally roll out the track with a paint
roller using the standard driving controls, using the right-stick to
change the angle of elevation or descent. Adding scenery and obstacles
is a bit of a chore, but changing the landscape is easy, and it really
doesn’t take much time to get a race-able result. Your courses can be
saved or shared, and we’re already seeing a mass of cool user-generated
tracks that show what can be done, though we suspect the direct Mario
Kart homages might not survive for too long. All the features you’d
expect to recommend tracks are there, along with hotlists for developer
and community favourites. 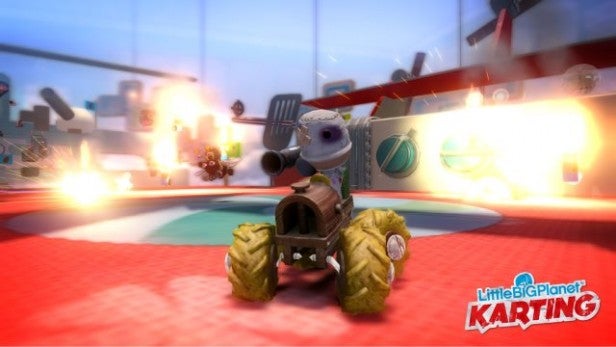 LBP Karting is rich in customisation
options, with a huge range of Kart parts and styles to try out, plus
just as many costumes, hairstyles and options for Sackboy. A future DLC
pack will allow you to import costumes from existing LBP games, which
should please those who’ve coughed up for specific packs. The size or
style of your vehicle doesn’t actually seem to make a huge amount of
difference in terms of speed or handling, but at least your ride gets
your own personal touch.

If we scored for features, then LBP Karting would be an 8 or a 9 out of 10. The same goes for presentation, where the crisp, quirky graphics, the wonderfully oddball soundtrack and the narration all make LBP Karting seem like an awful lot of fun. Unfortunately, we have to take the gameplay into account, and this is where the problems start creeping in.

Basically, the heart of the game – the Kart racing – just isn’t good enough. Some people think that designing kart games is easy, but in fact it’s an incredibly complex exercise in weapons balancing, character balancing, handling, course design and AI tuning. LBP Karting doesn’t get any of these things disastrously wrong – it’s perfectly playable – but it doesn’t get them quite right, either. There are so many weapons flying around and so many insta-kill drops and obstacles that the racing is all a bit messy. The AI is aggressive, and there seems to be a high degree of rubber-banding involved, making it impossible to pull clear of the pack. 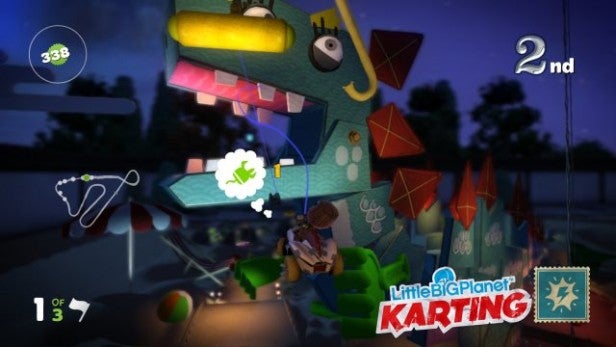 There are some clever mechanics for guarding your kart from attack by using weapons in a defensive mode, and for using drift for a speed boost, but neither quite work in the heat of the action. You rarely feel that you win a race by skill. Instead, you win because you happened to be in the right place at the right time as you crossed the finish line. In fact, you can move from first place to sixth place or visa versa so quickly, that the last twenty to thirty seconds of the race are often the only ones that matter.

And while this kind of game should catch fire in multiplayer, United Front has made a mess of the structure. You unlock both cooperative and versus races from within the main story mode, and there’s no way we can find to set up a playlist, work your way through a tournament or play in a Mario Kart-style cup. Instead, you either drift from one track to the next with your sofa-bound buddies, or play online with players voting for which track you tackle next. The result? A weirdly stilted experience. 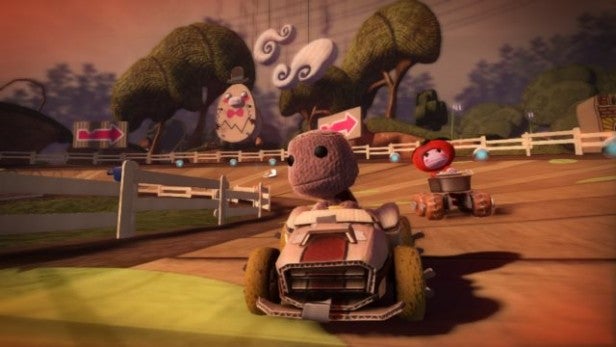 All this is hugely frustrating, because with some more tuning, a few adjustments and some restructuring, LBP Karting could become a great Karting game. In fact, it’s almost tempting to buy it and play it just to see what the community can do. As it is, though, it’s hard to wholeheartedly recommend. The LittleBigPlanet bit works brilliantly, but the Karting bit? Not so much.