Available on PS4 (version tested), PC and Xbox One

It doesn’t matter if you haven’t met Akko before. Whether you’re already a fan of Little Witch Academia’s anime series or – like me – this is your first visit to this apprentice witch’s world, you’re going to love her. The game itself, however? Not so much.

On paper, Little Witch Academia: Chamber of Time should work. An adventure RPG with a splash of side-scrolling dungeon brawling on the side, it takes all the things fans love about the anime series – the gorgeous backdrop of Luna Nova, the charming cast of Akko and friends, plus plentiful magic and intrigue to boot – and drops them into a living, breathing, digital world.

Trigger Studios – the team behind the anime – not only gives the game its blessing, but also created in-engine cut-scenes exclusively for the title, complete with fully-voiced cinematics. Mechanically, it should have been strong enough to tempt newbies to the franchise – and for fans, it should have been the perfect vehicle to jump into Akko’s world and explore at your own pace. And yet, somehow, it doesn’t quite deliver.

The plot is essentially Groundhog Day with a dollop of Harry Potter. Following an off-screen incident that sees Akko irritate a very Snape-like professor, she finds herself confined to the library on the first day of the summer break.

Three books into sorting the piles, Akko’s had enough of all that hard work and decides she’s earned herself a furtive forty-winks. Only she’s woken by her friends hours later to discover someone has hand-delivered a strange book while Akko was asleep. After some lacklustre sorting, they uncover a hidden doorway wherein lies a mysterious room housing a clock that mysteriously resets time at midnight each day. 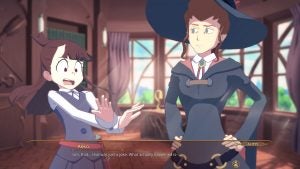 And therein begins our story. Akko and her friends – Sucy and Lotte, although you can pad out your squad with others, too – are the only ones unaffected by this blip in the space/time continuum, so it’s up to them to resolve the conundrum.

And it’s an interesting mechanic, this daily reset. Everything you need to do – from the events (read: missions) you need to complete, to the errands you run – must be completed in the correct time period, which means you’ll need to keep a close eye on the time. If you pop up somewhere you shouldn’t, characters may notice… but if you somehow miss your slot, there’s always a do-over tomorrow. Which will also be today, of course.

As quirky as this all is, however, the downside is you’ll see a lot of clock-hands-running-backwards cut-scenes that are dull to watch, and each two-hour period of the day is truncated by extraneous time announcements, after which the people around you will instantly disappear and/or appear. It’s as clumsy as it is unnecessary, especially if you’re part-way through a mission at the time.

It’s a game of two halves. On one hand, you have the adventure game in which you explore Luna Nova, meet teachers and students, and become familiar with its maze of corridors and secrets. The quests here present, I guess. At the start of the game, when you uncover Side Event 067 without seeing 1-66, it’s difficult not to feel overwhelmed. But once you realise how many engage the same activities – go here, do that, speak to her, return here – they aren’t much of a challenge. 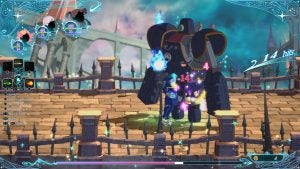 The Main Events can be really vague. “Find a way to fly through the air” states one mission’s description. Uh, okay. But where? And with whom? Am I looking for a person, a spell, a place, or all three?

Occasionally, the map will have a red banner denoting where you can find more information about missions, but it doesn’t do it for everything, which makes it difficult to ascertain how to proceed.

The game further gets in your way with its laughably unhelpful map (some of the areas are vast, which means that without a specific marker showing your exact placement, you’ll likely as not take the wrong corridors and rooms) and a manual save system that’s bizarrely complex (especially if, like me, your game bugs out and you lose progress at no fault of your own).

In addition, entrances and doorways are bizarrely hidden in plain sight by the 2D presentation, and regardless of whether or not you’ve already interacted with a character, a huge ellipsis speech bubble will forever hang over their heads.

The second half? It’s much more enjoyable, taking you to a variety of places to beat up monsters in 2D side-scrolling dungeons. Each party member boasts their own abilities in combat, but all can be tweaked by the game’s generous XP point distribution.

A well-balanced party can quickly dispatch dungeon creeps with a range of elemental attacks, and any dearth of magic points – the currency you need to cast spells in combat – automagically regenerate over time, so it’s worth hanging back and letting your magic bar replenish before you wander forwards, especially if there’s a boss waiting in the next room.

And these dungeons are great. While at first they seem pretty linear, they soon become increasingly sophisticated, offering environmental traps and branching paths that encourage exploration – particularly as many dead-ends hold a treasure chest or two for your efforts.

As you might expect, LWA offers all the trappings of a RPG, permitting you to accessorise your squad, tweak their individual capabilities, and unlock and booster magic spells. It’s a bit of a paradox, though: in the adventure part of the game Akko’s a mediocre witch, requiring potions before she’s able to pull off magic spells such as putting characters to sleep or fix broken objects. In the dungeons, however, she makes Dumbledore look like Ron Weasley. 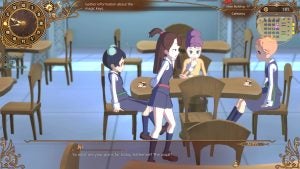 It doesn’t half get messy. The further into the game you trek, the busier those screens become, which means it’s easy to lose sight of your character – and even your opponent – in the scrum. The battles aren’t particularly challenging either, and even the boss battles are underwhelming, with some entirely beatable without taking a hit… and that’s coming from someone who’s typically pretty rubbish at brawlers.

However, while you can pick your squad you can’t direct them, which means I lost support characters unnecessarily because Lotte didn’t have the sense to cast a healing spell on herself; or Amanda wasn’t bright enough to attack from afar. And my, do they repeat themselves, recycling the same old worn exclamations with each attack, sometimes dozens of times in a single minute.

Little Witch Academia: Chamber of Time lacks originality, but it’s stuffed with colour and charm, bringing Luna Nova and its students to life with affection and humour.

Unfortunately, there are just too many mechanical quibbles that spoil the presentation; petty things that on their own don’t detract much, but together build a beautiful game that falls on just the wrong side of frustrating.

If you’re a fan of the anime, you’ll surely be enchanted by Akko’s latest adventure… but if you’re after a solid RPG with meaty combat, you should probably look elsewhere.