The Linn Kiko is much more than just a basic stereo speaker system too. The package includes the two speakers, and a lounge-unifying main control box that resembles a Sony PS3 – a classier-looking alternative though, naturally.

Both the speakers and the head unit are housed in a smooth anodised shell of aluminium, available in an array of shades. White, black, light blue, dark blue, champagne and silver are all options, ensuring the Linn Kiko a look that’s debonair rather than daring. There’s no shocking pink option here.

The Linn Kiko’s dimensions also plant it firmly in lifestyle system territory. Its speakers are just 26cm high, which is fairly small for a hi-fi bookshelf speaker. There’s a hanging bracket on each speaker cabinet too, letting the system insinuate itself into your living even more easily. 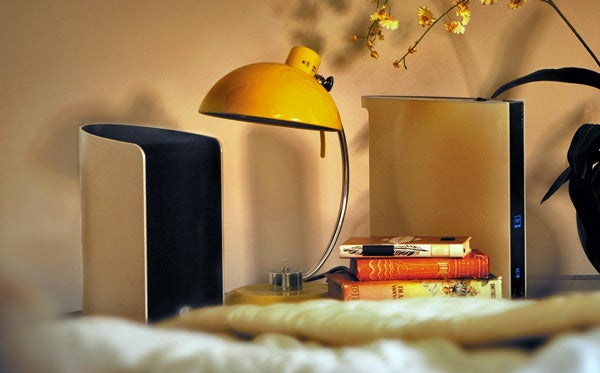 The Linn Kiko is clearly intended as a music lover’s system, rather than one for cinephiles. This is a dyed-in-the-wool 2.0 system, with no way to bulk up the sound with a subwoofer, or upgrade it to 5.1 surround.

It’s fully capable of taking on any modern source, though. It’s primarily designed as a wireless (although not wires-free) music streamer, but the Linn Kiko control box also houses three HDMI outputs, a phono audio input, optical and coaxial digital inputs plus a 3.5mm input on the front. You can switch between sources easily using the typically classy metal-bodied remote or the Kiko software. And crucially, there’s an HDMI output that lets the system act as a video passthrough.

It can take on a bevy of gadgets, and once fully-setup the Linn Kiko is pretty wire-heavy for a wireless streamer. To add to this, there’s no inbuilt Wi-Fi – you have to connect directly to a router using the Ethernet port – and the cables that plug the speakers into the base unit are monstrously thick.

They’re much higher-quality than we’d actually expect from a “mere” two-grand system, and have balanced Neutrik connectors, which is good to hear. In 95 per cent of scenarios the thickness of the cabling should prove no problem as the base unit is designed to live on a pretty substantial piece of furniture. It’s not heavy, but it is over 20cm deep.

To ease your way into using the wireless features of the Linn Kiko, there’s a software wizard that takes you through the process step-by-step. And as it uses a direct connection with your router rather than Wi-Fi, there’s no faffing about with WEP keys and the like.

We found the process unusually pain-free, and Linn offers its recommended software downloads on the support section of its website. It’s all based around an application called Kinsky, a Linn-developed app that lets you control and stream to the Linn Kiko from a computer, iPhone or iPad. It’s not currently the most intuitive software for absolute beginners but does come with a handful of Linn Kiko-specific controls.

Using the third-party Songcast and Songbox bits of software, also available from the Linn website, you can easily stream your existing iTunes music library to the Kiko system. And, as you’d expect of a “high-end” system like this, audiophile codecs including OGG and FLAC are supported, up to 24-bit/192KHz quality.

At present it’s not quite as easy to use as a full Sonos system – once fully up-and-running – but it is much, much more flexible. It’s in an open relationship with wireless, not an exclusive one.

The Linn Kiko speakers use cabinets of extruded aluminium, making their closest relatives the Linn Komponent surround speakers, which have now been discontinued. Aluminium cabinets let speakers produce sound of great depth and clarity without using masses of space. The Linn Kiko speakers’ volume is a mere 4 litres a piece.

Underneath the non-removable grilles that cover every part of the speaker not armoured with aluminium there are mid-range and tweeter drivers. Each driver has its own amplifier section that lives within the main unit.

There are naturally going to be some unavoidable limitations in a small-enclosure stereo system. If you want thunderous, wall-shaking bass to accompany your action film Blu-rays, you’re in the wrong place. And if you listen exclusively to dance music, you may not get on all that well with the Kiko sound signature.

However, if you’re looking for something a little more grown-up, the Linn Kiko is absolutely the ticket. The low-end and highest treble frequencies are relatively reserved, but the mid-range is superbly articulate and the system provides the Kiko with the high fidelity sound we expect of the brand.

It won’t replicate the sub-bass thrills that some less refined wood-cabinet speakers can create, but the extent to which the Linn Kiko can relay the texture of vocals and other mid-heavy instruments like violins is highly impressive.

It’s not a term we use all that often, but the Kiko is particularly adept at relaying the emotion of music. Lovers of classical and orchestral music will, well, love it. In this respect the Linn Kiko sound meshes perfectly with the system’s design.

That said, other less polite genres do sound great through the system too. Bass is not voluminous or particularly deep, but it is taut and punchy. And while there is a slight darkness to the treble end, it’s well resolved, natural-sounding and beautifully detailed. 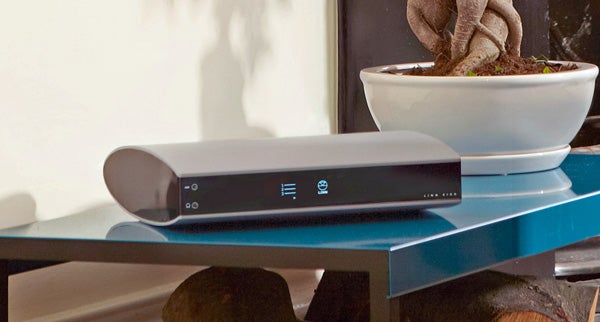 There’s no doubt you do pay a little extra to buy a stylish-looking system from a British name with the Linn Kiko. It’s not cheap, and thanks to its lack of system expandability it’s certainly not for everyone. However, it’s a well-designed wireless system that can fit into the average lounge far better than most. It’ll play with your two year-old Blu-ray player just fine – heck it’ll even get on with the Marantz CD player from 1998 that you can’t bear to part with.

The Linn Kiko is a classy wireless system from a high-end hi-fi pro that normally produces systems many times the price of this one. It blends wireless streaming with good old cabled connections to blend easily into just about any lounge, making it more accessible than many pure wireless systems. There are naturally some things to note with a small-cabinet, small driver stereo system like this – mainly that it’s not perfectly suited to movies. But if you value refinement over roaring bass, it’s a top choice.