The Linksys XAC1900 is something of a rarity when it comes to high-end routers, as it comes with its own modem. This means you can do away with having to buy and set up two separate devices as is often the case with most of the competition.

It’s otherwise the same Linksys EA6900 router we reviewed last year, which given that we rated it 10/10 means the XAC1900 has a lot to live up to.

When we say this is the same router as the EA9600 we really do mean it as the modem is in fact a separate unit and the router is the exact same hardware as before.

That means it’s the same smart looking triple-aerialled box with a relatively modest footprint for such a high-end router, measuring 256 x 210mm. Its aerials also only rise to 105mm. This compares to dimensions of 300 x 220 x 200mm for the Netgear X4 R7500. It can also be wall mounted, though oddly enough it hangs sideways. 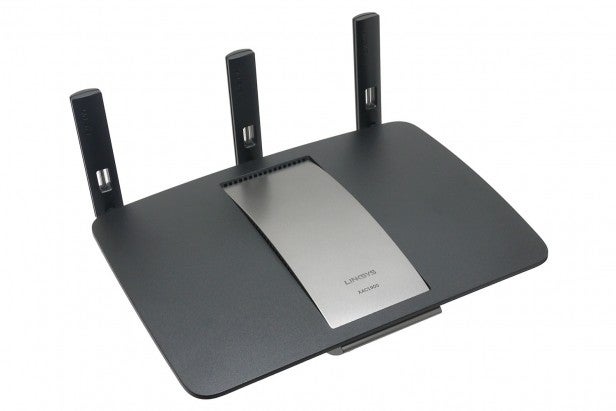 Build quality is decent, though we did find the aerials were prone to working loose more readily than on some competing units. We were also surprised at how few status lights there are on the front.

There’s basically just one light behind the Linksys logo, with nothing to indicate which Ethernet ports are working or that the Wi-Fi or internet is operational. You get Ethernet status lights over the ports themselves around the back, but it’s decidedly less convenient for troubleshooting than front lighting, though it is less dazzling – a key consideration for if it’s being positioned in the living room.

The modem, then, is an inline unit that also incorporates the power supply. In one end you plug the figure-of-eight power cable and the connection to your phone line, while out the other end comes an Ethernet and DC power cable. It’s a little inconvenient that this cable is quite thick and tethered, as it means you can’t easily use your own choice of cable length, or replace them if they get damaged. Thankfully the supplied cable is a plentiful 2m long.

The modem unit is also quite chunky, with dimensions of 145 x 100 x 35mm, but it should be relatively trivial to hide it out of the way behind a desk or suchlike. It doesn’t have wall-mounting hooks, though, which is something to bear in mind.

The key feature of the XAC1900’s router is its use of AC1900 Wi-Fi. This relatively new tweak to the 802.11ac standard actually provides a boost for older 802.11n 2.4GHz networks. It does this by using AC-level hardware to enable 256-bit modulation – dubbed Turbo-QAM – but on the 2.4GHz frequency. Previously Wi-Fi N was limited to 64-bit modulation.

The result is a boost in theoretical maximum throughput from 450Mbps to 600Mbps. Combined with the 1300MBps maximum of the 5GHz AC channel, you get a router that can achieve a total of 1900MBps. Thus the name. 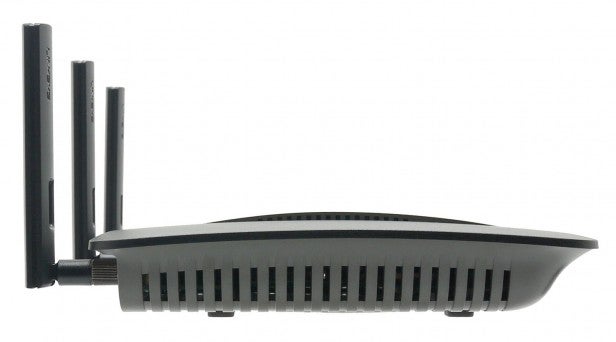 Not that you’ll ever achieve 1900Mbps, as you can only access one frequency at a time. Nor indeed will you be able to get close to either maximum figure on most current Wi-Fi receivers, such as those in your laptop, tablet or smartphone. That’s because both maximums require three aerial receivers, which only a handful of devices possess – some MacBook Pros for instance. In fact the boosted 600Mbps Wi-Fi N is only available on one device, which is the Asus PCE-AC68 desktop PC card.

As such, these AC1900 routers are less about getting the absolute maximum speed from 2.4GHz devices and more about having generally high-spec hardware that can offer good overall speeds and range.

In fact, AC1900 has already been superseded by what is variously called AC2350 and AC2400. This adds a speed boost to the 5GHz band (up to 1733Mbps) and uses four aerials to offer multi-user MIMO, for even better handling of many users at the same time. This is only just arriving, though, and no units currently have in-built modems.

Away from the Wi-Fi side of things the XAC1900 router is fairly typical in its feature set, for a high-end router. It has four Gigabit Ethernet sockets, a USB 2.0 and a USB 3.0 – for creating instant network storage and sharing printers – and a WPS button. There’s also a fifth Ethernet socket that’s the modem input. It’s useful to still have this separate, as it means you can easily switch to using a cable or fibre service.

This is a perfectly adequate set of features, although it’s certainly not at the absolute cutting edge. The Netgear X4 R7500 offers two USB 3.0 and an eSATA and includes a dedicated switch for turning off its lights as well as backlit buttons for WPS and turning Wi-Fi on or off.

Internally you’ve got a dual-core ARM Cortex A9 processor clocked at 800MHz to power things along, with a healthy 256MB of DDR3 RAM and 128MB of flash storage.