Home and small business users looking for a simple wireless-N broadband router are literally spoilt for choice although the majority of products provide a very similar set of features. The Linksys WRT350N offers that little bit extra as its integral USB port can be used to connect and share storage devices over the network.


There’s more to this than meets the eye as the router also has a built in uPnP media server for streaming content to compliant media adapters and it runs an FTP server as well allowing files and folders to be remotely copied to and from the attached device using any FTP client. Linksys is promoting the WRT350N as four devices in one as along with the storage and media server features you have an 802.11n wireless access point and a four port Gigabit Ethernet switch.

The WRT350N adheres to the design principles of Linksys’ standard wireless N routers so you have the unusual aerial cluster which comprises two standard aerials along with a large paddle shaped assembly in between them. Designed to increase range they can all be swivelled around easily and the unit can be positioned on its base or placed on its side using a small plastic stand. The four Gigabit ports are aligned at the rear alongside the WAN port which is a standard RJ-45 Ethernet port so you’ll need a separate external cable or ADSL modem.

Installation is a swift process as you can follow the CD-ROM based tutorial that covers all cabling requirements. We connected a preconfigured intelligent ADSL modem to the WAN port and were up and running in minutes. The web interface is easy enough to navigate and it opens with a page for entering general network settings and ISP details if you’re using a dumb modem.

We’ll start with the storage features as these are the most interesting and you get a separate section in the web interface where you can view connected devices, share them, set up workgroup membership and enforce access restrictions. We tested with a range of storage devices which were all recognised immediately enabling us to create a network share by simply entering a suitable name for the selected partition. You then enter a workgroup name, add users and groups and decide who is allowed access.


The media server can be switched on or off and you can choose to scan the storage device for multimedia files which are then added to its database. For FTP services you enable the server, allow internal and Internet access separately and choose which folders on the USB device are to be made available. Share access is controlled at the group level and each can have read only or read/write access granted although anonymous access is not supported.

Prior to performance testing we updated the test router with the latest firmware v2.00.17 and successfully accessed the shares from Boston Supermicro PCs running XP SP2 and Vista Ultimate. Real world performance started with a Buffalo FireStix and for general file copy operations we saw read and write speeds of 6.3MB/sec and 5MB/sec. The FileZilla FTP client reported almost identical speeds for read and write operations. Next we turned to a 300GB Maxtor external USB desktop drive and copying a 690MB video clip returned read and write speeds of 5.4MB/sec and 4.7MB/sec. Lastly, we tested large file transfers using FTP to copy a 2.5GB video clip to the Maxtor drive and saw this completed in 431 seconds for an average write speed of 6MB/sec. 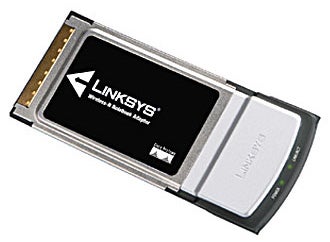 
Standard router features are good as you get an SPI firewall and a DMZ for one system whilst forwarding rules can be created for a single port and ranges as well. Internet access can be limited with up to ten policies where each one contains a schedule, a list of PCs defined by their MAC or IP address and a URL or keyword list.


You can only add four URLs and four keywords to each policy but each can also be used to block up to three applications where you select a service and port range or add you own custom applications. QoS (quality of service) is on the menu and traffic priorities can be applied to applications, voice devices, individual MAC addresses and even a specific Ethernet port. 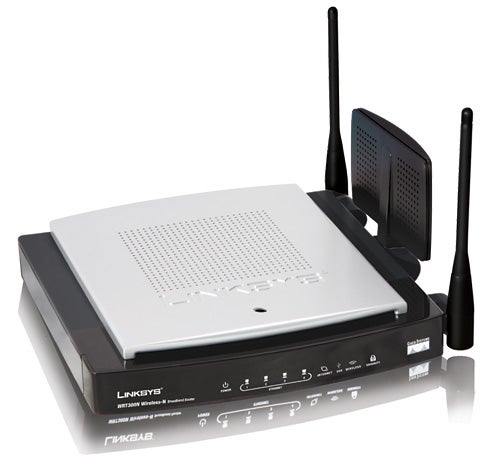 Wireless security features look good as well as you can activate SSID masking, MAC address filter lists and WEP or WPA/WPA2 encryption. You have WPA Personal and Enterprise with the latter requiring an external RADIUS server for user authentication. As expected with all wireless N products performance is well below the claimed figures. Using a Linksys WPC300N PC Card in our 1.6GHz Fujitsu Siemens notebook running Windows XP SP2 we saw a modest 47Mbps when copying a 690MB video clip over a close range WPA encrypted link.


The extra storage sharing features make the WRT350N unusual and considering it’s a secondary function, file transfer performance is quite reasonable. General router features are a cut above the rest and comparing its price tag with more common wireless N routers shows that it’s good value as well.

(centre)”’Access to storage devices can be controlled with user names and group membership.”’(/centre)

(centre)”’The media server can be switched on or off and files from partition scans imported into the router’s database.”’(/centre)

(centre)”’Policies can be used to block access to web sites and applications during selected time periods.”’(/centre)