Like with all of Linksys’ current high-end routers, the setup process for the WRT1200AC is simple but not without at least one frustration. Once powered on you can just type in either 192.168.1.1 or http://LinksysSmartWiFi.com and the router’s setup interface will appear.

It’s here where my consistent bugbear with Linksys arises: Linksys really pushes you towards signing up to its SmartWi-Fi service. It’s a useful service that allows you to use a mobile app to monitor your router as well as access it anywhere in the world, but I’m never a fan of these things being forced on you. It is possible to set up the router without using this service if you’re as adverse to it as I am, although it’s not the most obvious option. 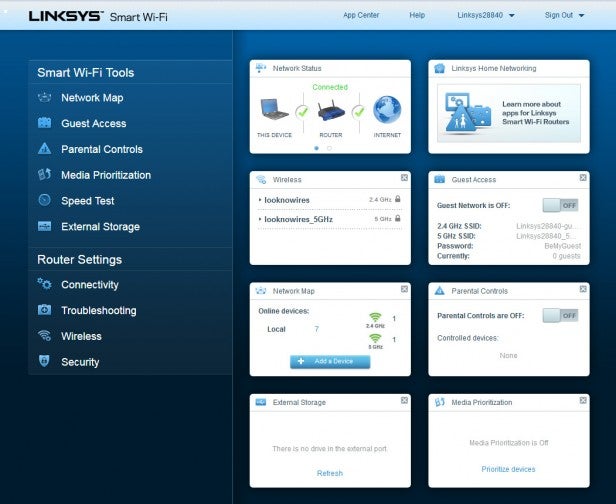 Once into the main UI, it’s mostly good news. Most options are clearly laid out and there are plenty of them. You even get a built-in speed test utility that connects to the speedtest.net service (useful for double-checking the problem if your internet connection and not your Wi-Fi or device). It’s not the fastest UI to move around but it certainly gets the job done.

If you fancy something a bit more customisable, Linksys has left the router open to the open-source OpenWRT and DD-WRT operating systems, which is a great addition for tinkerers.

The Linksys WRT1200AC may not be all that fast on paper but in my real-world tests it proved pretty impressive. Using the 5GHz band, it hit an average of 60.1MB/s at a range of 1m. That’s some way behind the 80MB/s the fastest routers have achieved but is competitive with plenty of lesser AC1900 models.

At a range of 5m and through two brick walls it dropped to just 40MB/s, which, again, is more than some AC1900 models could manage. Then at 7m and down a floor it hit 16MB/s. That’s some way below the 25MB/s of the WRT1900ACS but is again competitive with other theoretically faster routers.

The WRT1200AC also comes top when it comes to USB transfer speeds. It hit a whopping 80MB/s read and 45.5MB/s write to a USB hard disk. The next closest could only hit 60MB/s read and 38MB/s write. This makes it a compelling choice for small-scale media server setups.

That said, I did find this router a touch less reliable at long range in day to day use than triple-aerial routers. At the same sort of 7m range, while using a phone or laptop to connect, I found the connection speed to be quite variable and there would be occasional dropouts. It wasn’t that the router was crashing (unlike the Netgear R7000, for instance) but that I was just on the edge of its reliable range, at least when using the less powerful aerials of a small device like a phone.

As a result, it’s not an ideal router for large houses – or at least those with bricks walls – but should be fine for smaller two-up, two-down terraced and semi-detached properties. 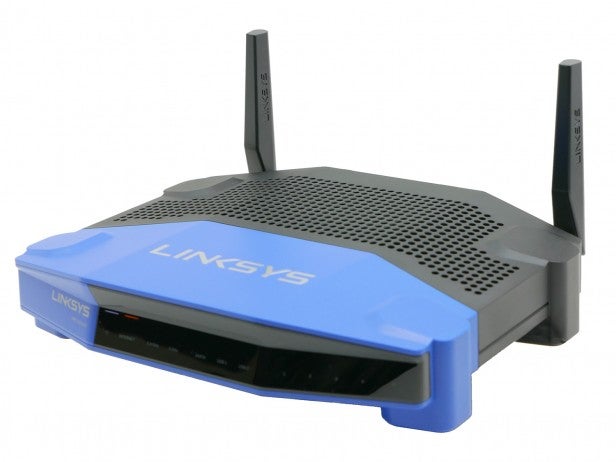 Should I buy the Linksys WRT1200AC?

At shorter ranges, this router can shame some lower-end AC1900 routers, which is fairly impressive. However,  it can’t quite reach the absolute maximum speeds of the best AC1900 models and doesn’t have handy features such as MU-MIMO. Its long-distance unreliability is also a problem for those with houses larger than the average two-up, two-down.
It’s still a compelling buy though: excellent build quality, a wide feature set, great USB performance and option of tinkering via OpenWRT are all big plus points. For the busiest households and offices that have really high demands on their WiFi, faster AC1900 and MU-MIMO units will still be a better bet.

It all comes at a price, too. Despite its modest WiFi spec it’s still a £100+ router so is hardly a bargain buy.

This isn’t the fastest router you can buy, either on paper or in practice, but it does exceed expectations. It’s as fast as some AC1900 routers in real world use and is built like a tank, making it a great option for those seeking reliability and customisation over sheer performance.