Despite the prevalence of broadband there are times or circumstances where it is simply not possible to have an ADSL or cable connection and with today’s bandwidth hungry users the humble POTS modem is no longer a worthy option. Enter the Linksys Wireless-G Router for 3G/UMTS, which is a standard broadband router that accepts a Vodafone 3G/UTMS PC Card, enabling it to deliver Internet access from anywhere there is a nearby power socket and Vodafone network coverage.


With a model designation of WRT54G3G-UK, the router adheres to Linksys’ sleek silver design philosophy. It combines the standard set of four switched Fast Ethernet ports, adds an 802.11b/g wireless access point and tops it all off with a PC Card slot in the top for the data card. A single, removable wireless aerial is provided and it also has an RJ-45 WAN port so you can connect an ADSL or cable modem when one is available. 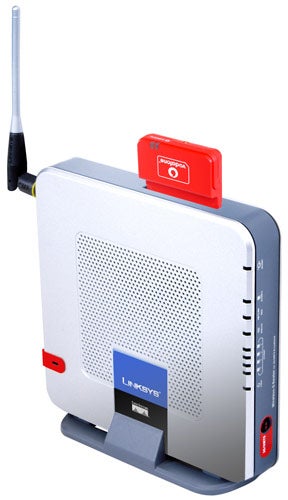 At present the router only functions with Vodafone’s Mobile Connect 3G/UMTS PC Card and bear in mind this is a separate purchase from Vodafone. You’ll need a contract and SIM card and various plans are available. The basic Vodafone Data 250 service offers the card for £60 whilst monthly downloads are limited to 250MB and cost an extra £30 inc. VAT per month. Maximum speeds for 3G connections using this card are 384Kbps download and 64Kbps upload. The card supports the slower GPRS as well so you have a fallback position if 3G coverage is unavailable although this drops down to a pedestrian 56Kbps.


Vodafone is also starting to offer its new 3G broadband service using HSDPA (High Speed Downlink Packet Access) technology which turns the wick up to a potential 1.4Mbps for downloads and 384kbps for uploads. Rollout is in progress and Vodafone reckons it’ll cover ninety per cent of the areas where 3G is currently in use by the end of 2006 so we would recommend checking Vodafone’s web site before purchasing this product.


And so to the router, where installation is handled nicely by a quick start wizard that’s fired up straight from the supplied CD-ROM. If you’re starting with a standard broadband connection it’ll run through a connection check list, test your Internet link and sort out wireless access and encryption as well. If you’re using the 3G card then pop it in the top and the wizard will go through setting up access for this as well. Either way, we found it a smooth process with no hiccup to mar the proceedings.

The web interface is common to all the latest wireless broadband routers from Linksys although the home page has extra options for the Vodafone features. This shows the status of the connection, the network name and signal strength and a button for manual connections if this option was selected. A separate status screen is also available, which although somewhat basic does provide more details about the PC Card along with the connection duration and data downloaded and uploaded.


Security features are reasonably good as the SPI firewall is enabled by default and blocks all unsolicited inbound traffic. Up to ten access policies can be scheduled for specific days and times and can be used to allow or deny access to predefined or custom services. You can also apply these to lists of PCs that are described by their MAC or IP address or you can use an IP address range. Web filtering can also be applied but with entries for only four URLs and six keywords this is largely redundant. Wireless security fares a lot better and really does need to be implemented as you can’t switch the access point off. Fortunately, you can pick and choose from SSID masking, MAC address filter lists and WEP and WPA encryption, which is offered as WPA Personal and Enterprise with the latter requiring an external RADIUS server for user authentication.


With a 3G connection showing a good signal strength we tested download speeds using Intel’s Speedtest tool. This reported a healthy 363Kbps – not far off tops for a standard 3G connection although subsequent test shows this varying between 200Kbps and 350Kps. To get a more realistic feel for speed we downloaded the 42.2MB MSDE 2000 engine from Microsoft’s web site which took 1020 seconds for an average of 338Kbps. We then swapped over to a standard broadband connection with an intelligent ADSL modem attached to the router. Intel’s Speedtest reported a top download speed of 440Kbps and downloading the same 42.2MB file took 824 seconds for an average speed of 420Kbps. Overall, we found 3G performance to be comparatively good and you have the added bonus of being able to use the PC Card in a notebook for remote access if you don’t want to carry the router with you.


Linksys is offering a very smart and quite unique solution that can deliver shared Internet access to places where normal broadband can’t reach. We would recommend waiting for the Vodafone 3G broadband service which is significantly faster and doesn’t cost much more but even with the standard Mobile Connect card you’ll find performance isn’t much behind a basic ADSL connection. 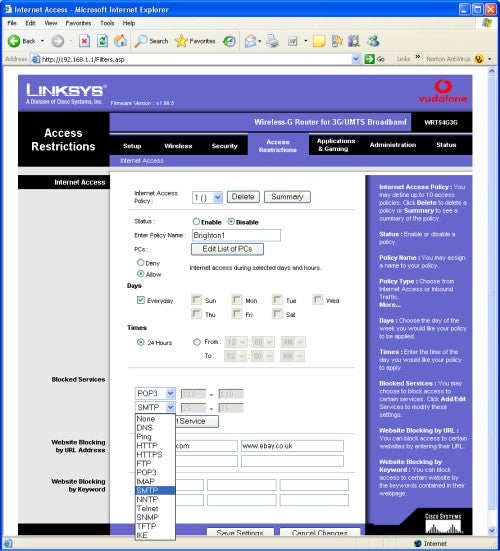 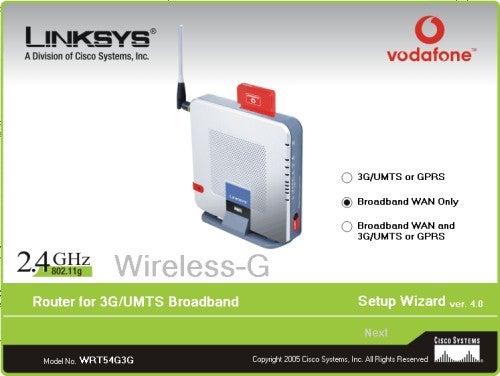 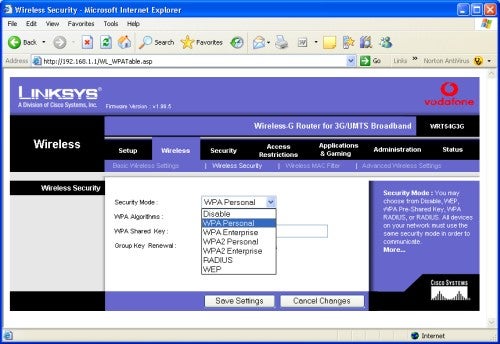 The status screen provides more information about your 3G connection 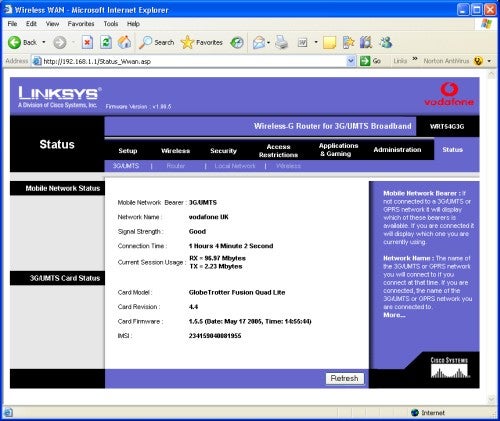 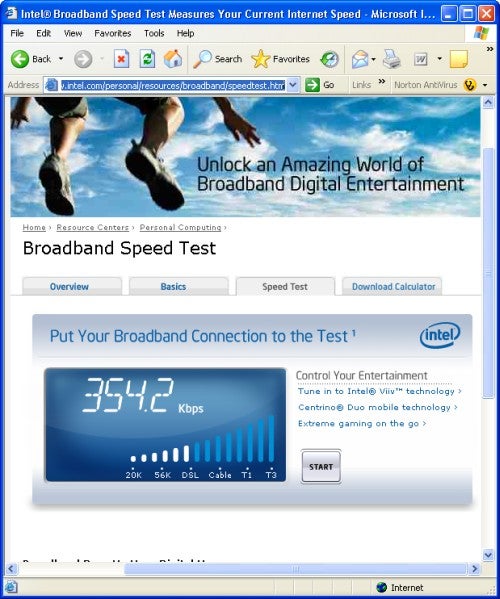 Access controls, port forwarding and a DMZ are all supported but less likely to be used in a remote location