Black is back this year as Belkin’s sleek trademark design has already been adopted by Netgear and now Linksys with its WRT110 wireless router. This sliver of plastic looks reasonably good value, too, as it delivers a decent range of features for under fifty quid. However, note that at this low price you won’t get Gigabit Ethernet and neither do you get wireless-N. The WRT110 is touted by Linksys as a wireless-G router but claims it can work with wireless-N clients and can also deliver similar speeds. 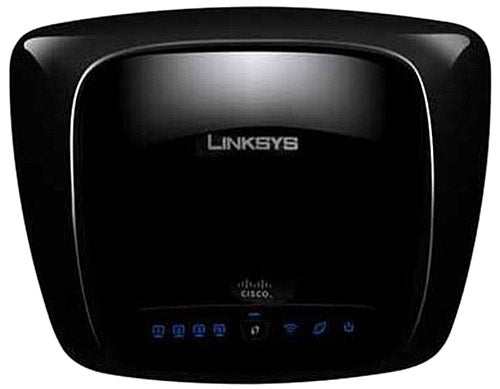 The WRT110 is MIMO enabled but Linksys has done away with external aerials. You only get two but these are inside the chassis where they won’t mar its sleek lines. At the rear you have a standard four-port Fast Ethernet switch and an RJ-45 WAN port for connecting suitably equipped cable and ADSL modems. No USB ports are provided so you can’t attach printers for sharing or use the Windows Connect Now wireless setup feature but you do get a button on the front panel which is used for initiating WPS (Wi-Fi Protected Setup) sessions with suitably equipped wireless clients. Well, that’s the plan but the review unit had a reserved sticker over it for future use.

Installation is handled smoothly by a CD-ROM based utility which helps out with cabling conundrums and then goes through a quick start wizard to get the router up and running. Linksys gets extra brownie points for insisting that you change the default administrative password and set up wireless encryption with a suitably complex passphrase. A new feature is Linksys’ LELA (Linksys EasyLink Advisor) v3.0 which provides a smart interface for viewing and managing all network devices attached to the router. It opens with a full network map showing the router, each connected system and whether Internet access is currently available.

Selecting a device pops up a window with details about it such as the connection speed, its IP address and the installed operating system. For the latter, LELA was very accurate with it correctly identifying Windows Server 2003, Vista Ultimate and XP Professional on our test systems. Selecting the router allows you to change its administrative password and encryption key and if an unidentified system appears in the map you can flag it as an intruder where it will be highlighted in red. However, this action doesn’t do anything else so you can’t use LELA to actually block an intruder from accessing your network.


LELA tries to make the best of the situation but it got us on our knees a few times. When testing with Windows Vista and Server 2008 systems it would occasionally crash, it couldn’t report the network connection speed on the systems that didn’t have LELA installed, and the link for the help files on Linksys’ support site didn’t work so we were unable to retrieve a user guide for it. Furthermore, when we attempted to access the router’s advanced settings from LELA all we received was a pile of HTML source code.

Back to the router, and general security is provided by a standard SPI firewall which is switched on by default and you can also choose to block proxy servers, ActiveX controls, Java applets and cookies. We noticed that Linksys’ DHCP server still defaults to only reserving client IP addresses for a single day and we would recommend activating the option that reserves IP addresses for specific MAC addresses when they are first dished out. This way any systems that rely on having the same IP address assigned such as those in the DMZ or included in port forwarding rules won’t have any problems. 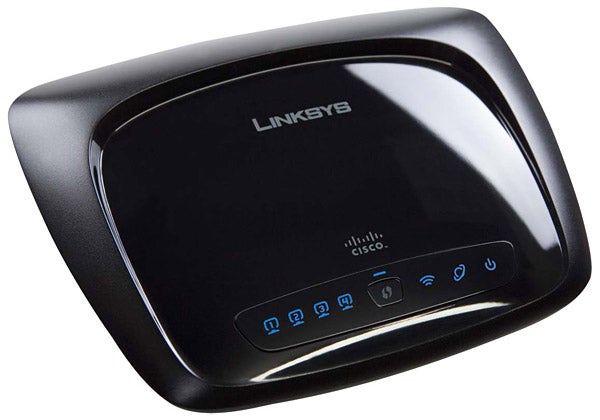 The router provides a useful range of access controls and you can use up to ten policies for restricting Internet access where each one can contain a schedule, a list of PCs defined by their MAC or IP address and a URL or keyword list. The latter two features are of limited value as you can only add four URLs and four keywords to each policy. However, you can use each policy to block up to three applications where you select a service and port range or add your own custom applications. QoS (quality of service) is also on the menu and traffic priorities can be applied to applications, voice devices, individual MAC addresses and even a specific Ethernet port.


Wireless security features look good, too, as you can activate SSID masking, MAC address filter lists and WEP or WPA/WPA2 encryption. You have WPA Personal and Enterprise with the latter requiring an external RADIUS server for user authentication. We found wireless performance to be very respectable and to test this we installed a Linksys RangePlus WUSB100 USB adapter in a Windows Vista test system. Copying a 690 MB video clip between this system and another on the LAN over a close range WPA encrypted link delivered average speeds of 50Mbit/sec – almost as good as many wireless-N products.


Linksys’ WRT110A is a low cost wireless-G router that offers a reasonable range of features for the price and surprisingly good wireless performance, but is let down by the ultimately flawed LELA utility. 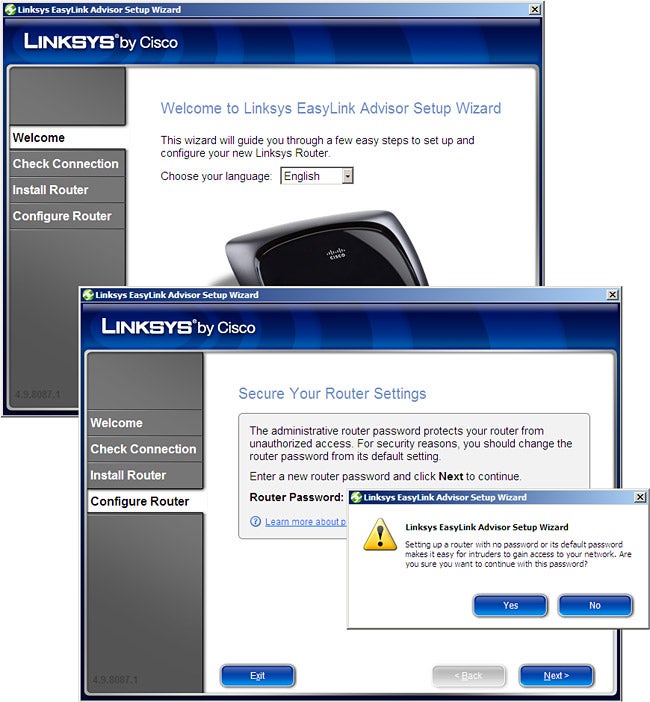 (centre)”’Linksys helps with initial setup and makes sure you’re aware of security issues.”’(/centre) 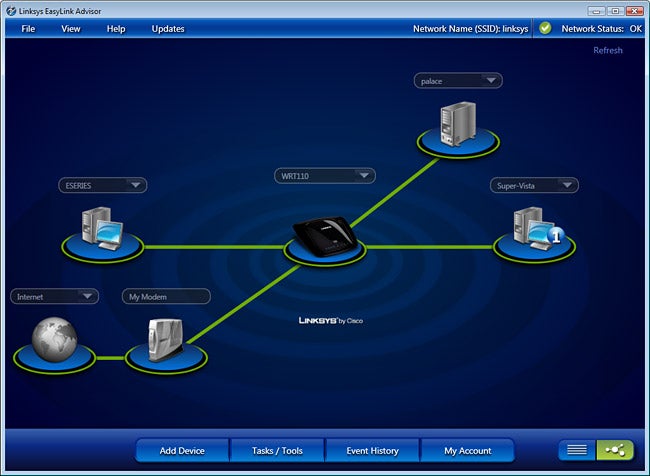 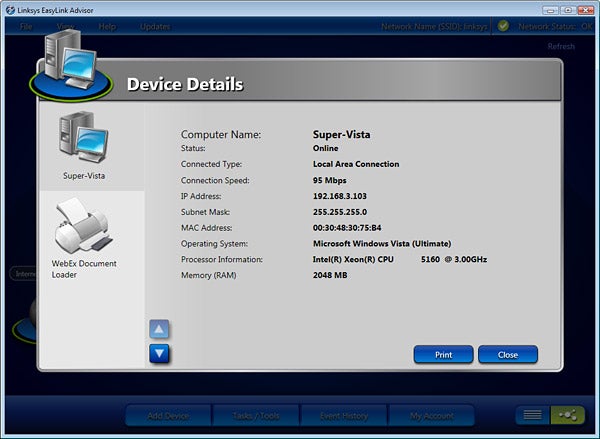 (centre)”’You can find out plenty of information about connected systems but not all will be as forthcoming as this one.”’(/centre) 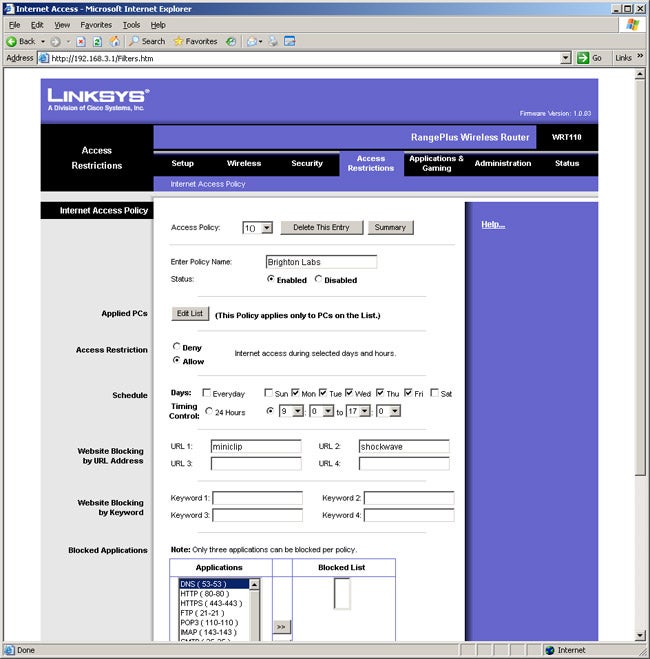 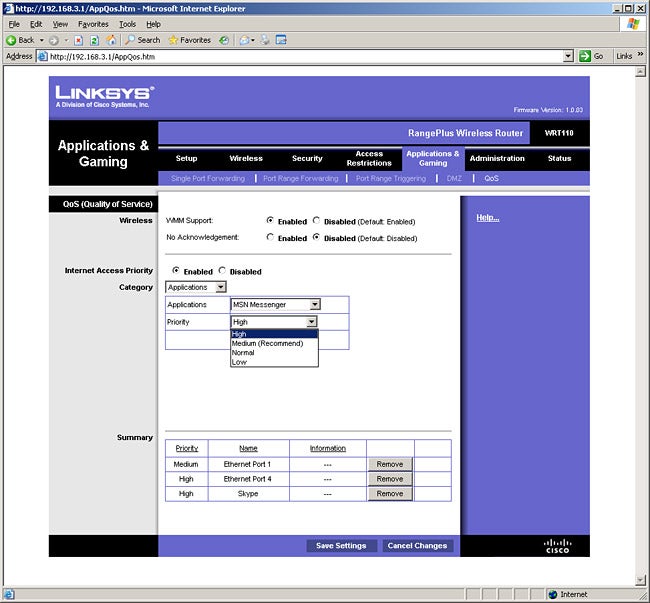 (centre)”’QoS is on the cards and can be applied to a wide range of criteria including Ethernet ports.”’(/centre)