Linksys has traditionally had a very low profile in the desktop NAS market making the NAS200 its very first, and only, proper appliance. It’s a compact little unit that’s only offered diskless and can accept up to two SATA hard disks of your choice. The base unit can be had for less than £100 making it look very competitive when stacked up against the likes of D-Link’s DNS-323.


When empty, the NAS200 is a featherweight but it’s nicely designed and will look good on your desktop. Adding hard disks is a cinch as you unclip the covers at the rear and slip them in making sure that the release ribbon for each one is accessible. No tools are needed and you can opt for one drive and add another later on if you wish. For testing we installed a pair of 150GB Western Digital Raptor SATA drives, which were accepted without any problems. 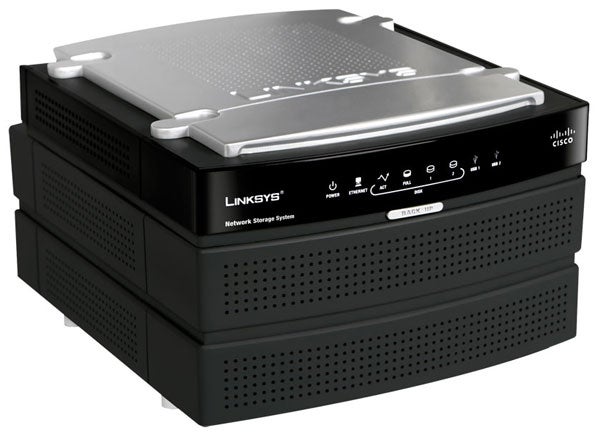 Network connectivity is going to be this appliance’s Achilles Heel as you only get a Fast Ethernet port. As you’ll see in our performance tests general file copy speeds are well below those of appliances endowed with Gigabit Ethernet making this a poor choice for impatient users. Storage can be expanded further as the two USB ports can be used to add external drives, which will be automatically shared on insertion. The button on the front panel is more interesting as it’s linked to the bundled NTI Shadow backup software and pressing it fires up preconfigured jobs on the PC running the software.


Installation won’t take long with Linksys’ Setup Wizard on the case as this guides you gently through every step of the way. Next you move over to the browser interface which we found easy enough to use but frustratingly sluggish at times. The status screen provides a rundown on installed drives, total and used storage capacity and details of any USB drives. With two hard disks in residence you can opt for spanned, striped or mirrored RAID arrays or leave them as two separate drives. Access controls are limited to local usernames and passwords but you can apply quotas to each one to limit the amount of space they can have.


The NAS200 is geared up for Windows users as it only supports the CIFS/SMB protocol but it also functions as an FTP server. Shared folders are easy to set up and you can view them all in a list and decide on read and write privileges for each user. Linksys provides a useful shared folder mapping utility, which sits in the System Tray and also enables you to shutdown USB devices for safe removal. Usefully, we found Windows PnP-X worked fine so the default public disk share was automatically mapped to our Windows Vista system.

The appliance also offers a Download Manager facility, which enables files to be downloaded in the background over HTTP or FTP. If users are permitted to use this they can create their own jobs but only individual files can be selected on the remote system and jobs can’t be scheduled. We had no problems creating jobs that copied files from a Netgear ReadyNAS NV+ to the NAS200 over FTP. Multimedia is on the agenda as the appliance offers UPnP media services for streaming to suitable media players but you don’t get the ubiquitous iTunes server as well.


When it came to the performance tests our concerns were vindicated as copying a 690MB video clip from a Boston Supermicro 3.2GHz Pentium D system running Vista returned pedestrian read and write speeds 3.9MB/sec and 3.8MB/sec respectively. FTP performance was marginally better with the FileZilla utility reporting read and write speeds of 5MB/sec and 4.5MB/sec. We also inserted a Maxtor USB external hard disk and copying a 300MB collection of music files across to the appliance returned a modest 1.4MB/sec. To put these speeds in perspective D-Link’s DNS-323 returned up to 23MB/sec over Gigabit Ethernet whilst QNAP’s TS-209 delivered up to 15MB/sec. We also configured the two drives in the NAS200 as a RAID-0 stripe so performance for the NAS200 won’t get any better either.

We like the NFI Shadow utility as this provides a good range of backup tools and, as the name suggests, can be set up to run permanently in the background, where it saves new files and modifications as they occur. Alternatively, you can use it to run scheduled jobs at regular intervals and also specify how many file revisions you want to keep. The backup button on the appliance worked perfectly as pressing it caused our test job to fire up almost immediately. Bear in mind that if NTI Shadow is installed on more than one PC and each instance has multiple backup jobs this procedure will start everything up together. Performance was par for Fast Ethernet speeds with a backup of 1GB of test data returning only 3MB/sec.


The NAS200 is neat little NAS appliance with a reasonable range of features for the price and a smart backup software package as well. However, it’s real shame that it only has a Fast Ethernet port as this does hit performance hard.

”’(centre)The web interface is quite basic but it’s easy enough to use.”’

(centre)NTI Shadow is a smart backup package and all jobs can be fired up using the button on the appliance.