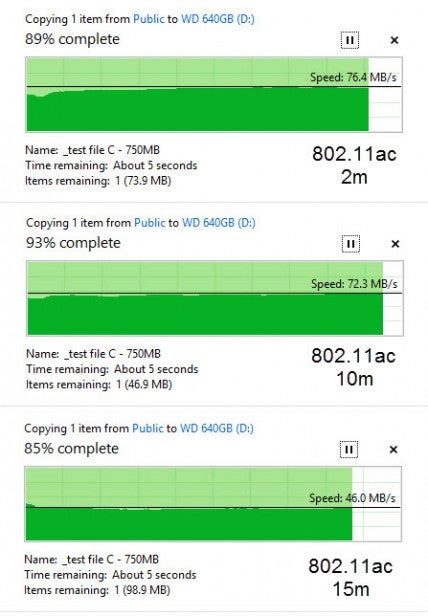 It is perhaps embarrassing for Linksys that currently the only wireless adaptor able to fully test the EA6900 is rival Asus’ PCE-AC68, but the company assures me this will change in the near future. More embarrassing is that Linksys has also been left trailing in the wake of Asus’ recent run of top-notch routers, but the EA6900 fixes that in perhaps the most comprehensive fashion we’ve ever seen. 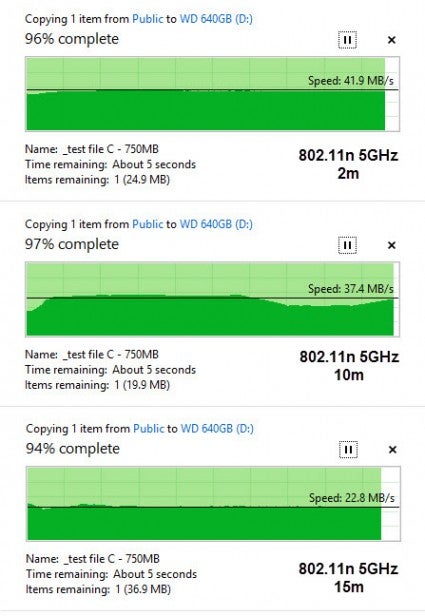 We mention these in a group because, aside from the final 802.11n 2.4GHz 15m figure, these are all new benchmarks – a quite remarkable achievement. In fact, even the final 7.95MBps result is second only to the 8.94MBps we got from the Asus RT-AC68U and both are nearly double what we’ve attained from any other router at this distance.

Starting with the 802.11ac results, the EA6900 brings a near 50 per cent speed boost compared to every 1750Mbps router we have tested. Only the Asus RT-AC68U can live with it having managed greatly improved speeds of 74.4MBps (595.2Mbps), 64.3MBps (514.4Mbps) and 41.2MBps (329.6Mbps) in a fresh round of testing following several firmware updates since our initial review back in early September (original review updated).

To put this in perspective these speeds are approaching figures we saw from NAS with wired Gigabit Ethernet connections only last year. 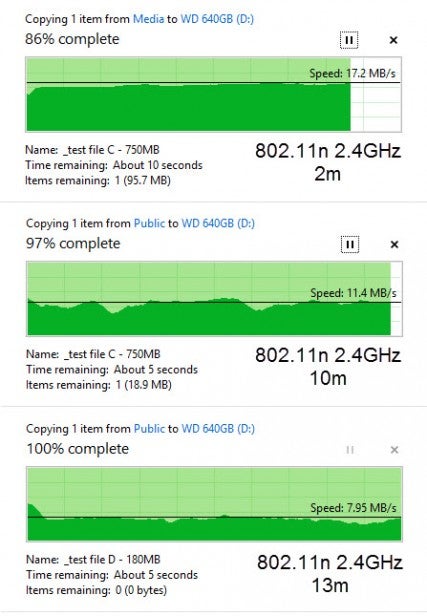 And yet proportionately these figures are blown away by what the EA6900 produced from our 802.11n 5GHz tests. Its performance at 2m and 10m nearly doubles what we had previously seen from many routers, while only the RT-AC68U was able to stay within two thirds of its speed at 15m.

Other routers all failed to hit double figures, despite being tested at 13m – this includes Linksys’ previous flagship, the EA6700.

Lastly the EA6900’s 802.11n 2.4GHz performance was also hugely impressive. As mentioned, the RT-AC68U and its Turbo QAM support actually managed to top the EA6900 at 15m, but the EA6900 inches ahead at 10m. At 2m the EA6900 really shows off being 20 per cent faster than the RT-AC68U and nearly 70 per cent faster than other 802.11ac routers we’ve tested. This is great for legacy hardware and shows that AC1900 routers currently stand significantly from the pack.

Lastly, we come to USB performance, a notably weak spot of Linksys routers in the past. Linksys has gone a long way to rectifying this with USB 2.0 and USB 3.0 speeds of 16.7MBps (133.6Mbps) and 12.5MBps (119.2Mbps) speeds respectively. This puts it right beside the best speeds we’ve seen from the Asus routers that have dominated this category but, while some way ahead of the rest, it doesn’t quite top them. USB 3.0 also remains a curious novelty for now, often slower in tests (the claim has been made it causes interference), and with speeds on both nowhere near USB 2.0’s limit. 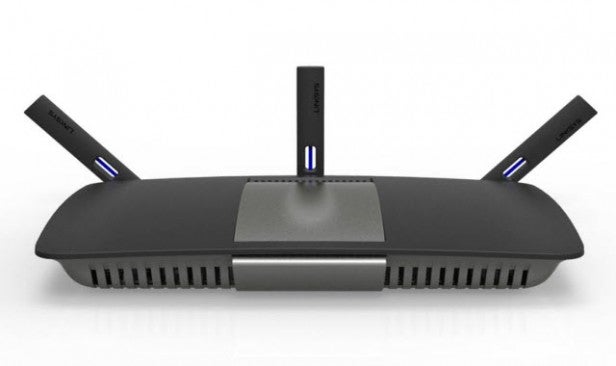 With this level of performance the answer is clearly ‘yes’, but the final cherry on top is Linksys has broken from type with aggressive pricing. The EA6900 has an RRP of £169.99, which makes it far from an impulse buy, but that is £20 less than the Asus RT-AC68U and within £10-20 of other premium AC1750 routers.

Furthermore, Linksys debuted the EA6700 at £169.99 originally, which shows it is making a conscious effort to cap pricing. How this will affect the rest of the Linksys range remains to be seen, but they are all left eating the EA6900’s dust.

In fact there are only two caveats we can find with the EA6900 and neither are directly its fault. The first is that getting the very best 802.11n speeds out of it requires a Turbo QAM compatible WiFi adaptor and they won’t be plentiful until into 2014. Secondly, Netgear’s AC1900 rival, the R7000 ‘Nighthawk’, will launch in the UK before the end of the year. Some will want to see it in action before making their pick, though Netgear’s UI is traditionally a weak point, especially compared to Smart WiFi.

The EA6900 sets new performance benchmarks for us in virtually every test and won most by significant margins. The Linksys EA6900 also looks great and remains wall mountable, unlike many routers which have moved to vertically standing form factors. Smart WiFi is a fantastic differentiator and the price, while undoubtedly premium, still offers real value for money compared with the competition. It’s a class act.

Next, read our round-up of the 10 best routers currently available