The RE6400 is a dual-band Wi-Fi extender that can be used to improve the range of your existing Wi-Fi network. Just place it between your router and the area where your router struggles to reach and it will bring the Wi-Fi with it.

Supporting maximum Wi-Fi speeds of 867Mbps using the 5GHz band and 300Mbps using 2.4GHz, it’s among the faster extenders (in terms of theoretica maximum speeds) currently available on the market.

This is a smart-looking device with a white plastic finish. It’s quite large, though, with dimensions of 21 x 16 x 9cm. It also has a couple of aerials sprouting from its sides, which rotate and splay outward, allowing you to optimise their position for the best signal.

A single strip of light on the front indicates the device’s status, glowing green if all is well and variously flashing green, orange or red depending on what’s going on. Most usefully it shows solid green, orange or red to indicate if it’s within range or getting too far from the router whose range you’re trying to extend. This, in theory, theory makes it easier to find the optimal position for the extender. 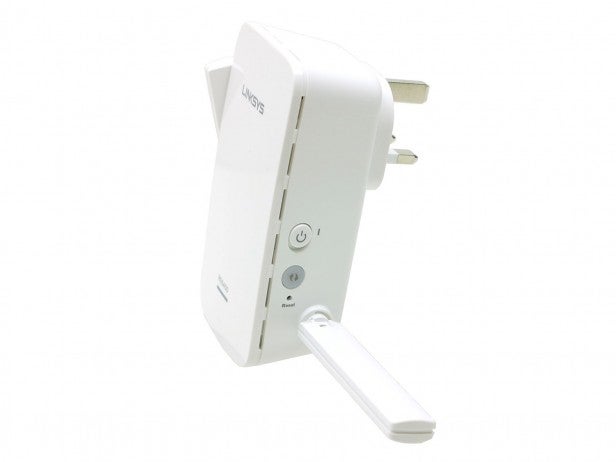 On the left side is a WPS button for easy one-touch connection of the extender to your router. Here there’s also a power switch that can be used to turn off the extender – a slightly more convenient way to save power than unplugging the whole unit.

A single Ethernet socket can be found on the bottom of the unit, which can be used to connect wired devices to your network. This will prove handy if you have an older network printer or a desktop PC nearby, since it makes for one less device congesting the Wi-Fi. It also means you’ll get faster overall speeds since there’ll be no loss of performance from the extender to a device plugged in over Ethernet. I also like that the socket is on the bottom, since it makes it easy to keep cables tidy.

Setting up the RE6400 is a cinch. Just plug it in and hit the WPS button on the extender and your router. Once the two have paired, you’ll be ready to roll.

Almost, anyway. To actually enable extension of both the 2.4GHz and 5GHz bands of your Wi-Fi you’ll need to connect to the new network then browse to http://extender.linksys.com. From here you can enable the second band and change the network names and passwords.

Using the light on the front it’s easy to determine if the extender is close enough to your router for a strong connection. However, as with many previous extenders I’ve tested, I found it was necessary to get the extender to just the point at which it tipped from green to amber to significantly out-range the router.

In fact, this is a key issue with extenders in general: you need to set them up in a fairly narrow sweet spot for them to be effective. As such, it may be necessary to trail a mains extension cable or put in a new socket to get the device setup properly.

In this regard, Powerline adapters can be a better option for extending Wi-Fi, since they can work over a much longer range. 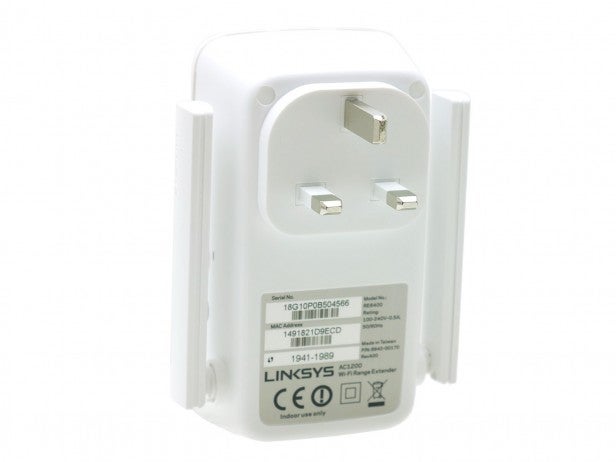 To test the RE6400, we had it positioned around 5m from the router with one brick wall in between. It could’ve been placed a little further away but here it receives a good strong signal and it’s our standard test spot. Transfer speeds were then tested at two distance: up a floor and through another wall and at the bottom of the garden, a further 7m and one wall away. Testing was done using LAN Speed test.

In the shorter range test the RE6400 performed almost exactly as expected. Using the 5GHz band it hit 68.1Mbps download and 71.5Mbps upload, so some way short of the faster extenders that can hit 140Mbps, but comfortably ahead of nearly all extenders from a year or two ago that would struggle to hit 20Mbps. Using the 2.4GHz band it hit similar figures of 54.4Mbps down and 68.7Mbps up.

The Linksys RE6400 is a very capable Wi-Fi Extender that offers an easy setup procedure, good range and fast peak performance.

Priced at £45, it’s competitively priced so overall makes for a good option if absolute maximum speed isn’t a priority.

A fast, easy-to-use Wi-Fi Extender, the Linksys RE6400 is well worth considering.