What is LightwaveRF Home Automation?

The approach that many companies take for home automation is to use plug-in sockets and smart bulbs. While this makes these systems easier to fit, they can be ugly and difficult to control. LightwaveRF’s method is different. With the main products, you physically replace your light switches and power sockets with smart versions. That way, you get all the benefits of a smart system, but you can flick on a light in the normal way when that’s more convenient. It’s a neat solution, making LightwaveRF stand out from the competition. Although I haven’t reviewed it here, LightwaveRF now extends to control your heating, too, making it a single-shot system to control your entire home.

All of the light switches in this system are dimmers. This is because UK homes typically have live cables, the switch and no neutral. Dimmers mean the switch is never actually turned off. The downside of this method is that you need to have dimmable bulbs installed in every LightwaveRF-controlled light. All halogen and filament bulbs should work easily, but LED lights can be a different matter. I’ve found that some cheaper bulbs continue to glow with the light switch set to off; branded bulbs tend to work better. Megaman UK has an excellent guide to which of its bulbs are compatible with LightwaveRF.

Up to four gang switches are available, with chrome, black chrome and stainless steel options available. Again, installation is straightforward: just replace your existing light switch and then attach the metal faceplate. I love the look of the light switches: they’re modern, but the metal finish gives them a classic look that will suit practically any home. 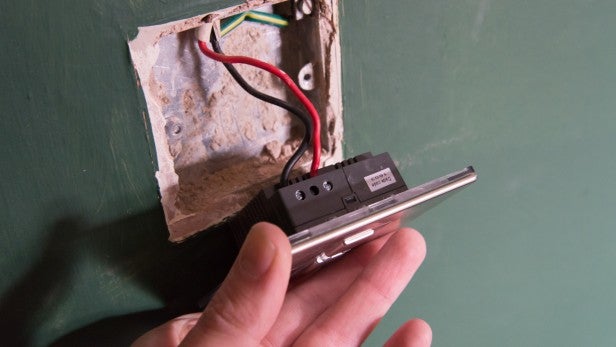 Note that LightwaveRF dimmers are quite deep, though, so you may not have enough room in a shallow wall box. For one of my switches, I fitted a chrome surface-mount pattress box and attached the LightwaveRF dimmer to that.

Control doesn’t end at the main light; there are other options. Two-way dimmers let you replace secondary light switches on the same circuit. Alternatively, battery-powered wireless switches let you add more controls without having to run more cables.

Electric sockets come as single or double units. You can choose between chrome, black chrome, stainless steel and bronze. LightwaveRF sockets are a little deeper than regular sockets, so they won’t fit into shallow wall sockets. I have to say that they’re gorgeous and look better than the vast majority of dumb designer sockets. For double sockets, each socket appears as a separate device that can be controlled individually. 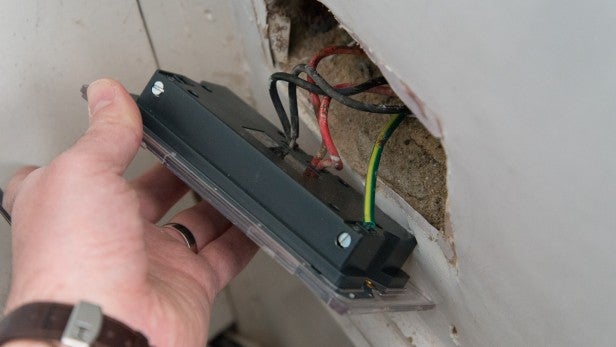 If you don’t want to replace an entire socket, then LightwaveRF sells plug-in remote sockets, with both On/Off and Dimmer units available. These plastic units aren’t particularly attractive, but they’re simple to use and look similar to those provided with rival systems. 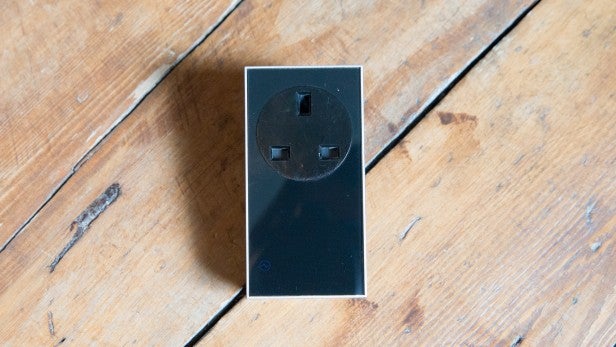 At its most simple, LightwaveRF switches can be operated in the traditional way. For sockets that means tapping the button, with the LED changing from amber to blue to show that a socket is on. Light switches operate in a similar way, although you can press and hold the On button (top) to brighten, and the Off button (bottom) to dim. This is brilliant because, as much as I love home automation and app control, sometimes it’s easier just to do things the old-fashioned manual way. This is particularly true if you have guests, as you don’t (and shouldn’t) have to explain how to turn on the lights. 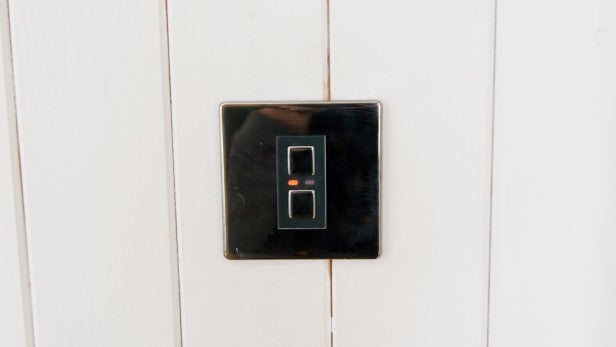 LightwaveRF’s proprietary protocol allows for direct control of all devices, so there’s a range of wireless controls available, too. Each socket or light switch can be controlled by up to six devices, which you have to manually pair following the simple instructions.

The most simple controllers are the automatic ones, with a magnetic switch for doors and windows, and a motion sensor available. The motion sensor allows for the lights to turn off automatically, once it detects no motion for a set period of time. There are a few options for direct contol, too, including the wireless remote. A switch at the bottom lets you select between four profiles, with each profile able to control up to four devices. Not only does the remote offer on/off control,you can hold the buttons down to dim, too. 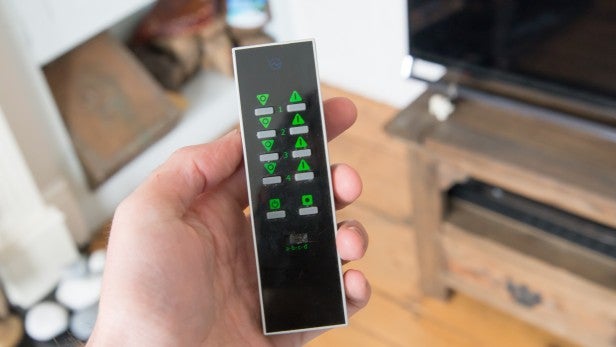 The Scene Selector is a slightly more powerful wireless light switch. It looks similar to the Dimmer, but also gives you dedicated scene controls. Each scene sets the paired devices to jump to the saved presets – for example, you may want everything on for one scene, but have a movie-watching scene where your lamps turn off and the main light dims. Having access to such modes without having to touch a phone is incredibly powerful. Smartly, the switch fits into a standard wall box so that you can mount it neatly. 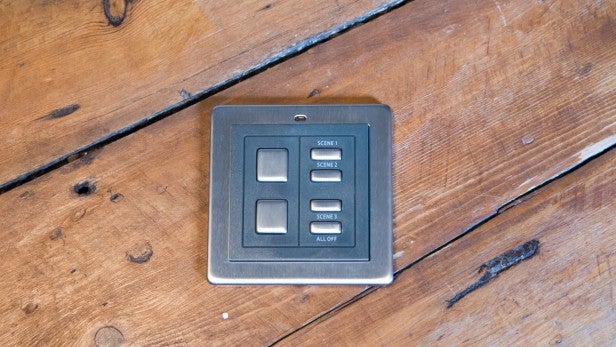 While all of this direct control is handy, app and internet control make the LightwaveRF system smart. Going smart requires the Lightwave Link, which plugs into your router via Ethernet. Via the neat smartphone app, you register each LightwaveRF device, which you can then name and assign to a room. Registering a device in this way uses up one of its controller slots, although this is shared between all smartphones. 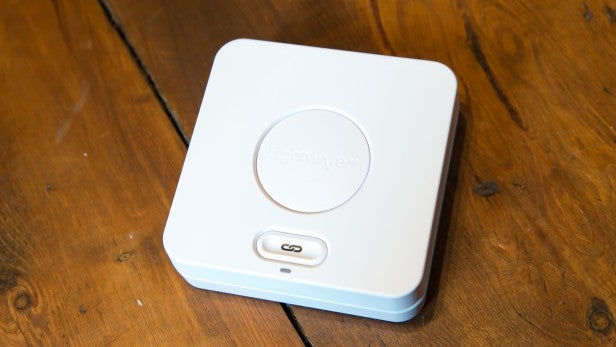 From the smartphone app, you get full control over all of your devices, including setting the dim level between 5% and 100%. With devices organised into rooms, it’s easy enough to find the one you’re after. You can add scenes (confusingly called ‘moods’ here) to each room, too. 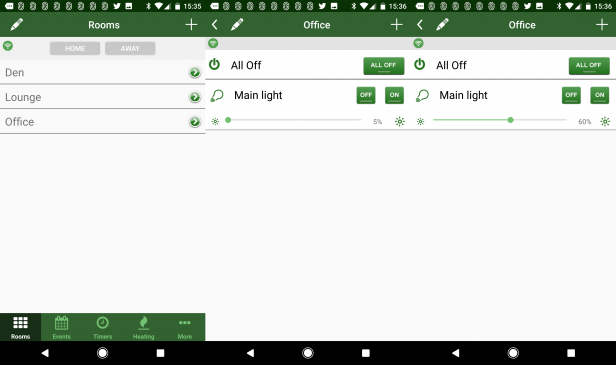 More powerful automation comes via Events, which let you programme a sequence of devices to turn on and off. Events can be scheduled using the Timers option, either to come on at a set time or to operate at Dusk or Sunrise.
For each event, you can add delays between each action. That may not sound that useful, but this feature comes into its own with the random delay option. Using this when you’re away to make your lights come on and off at random times can give the appearance that you’re home. It takes a bit of programming to get right, but it’s a neat feature to have. 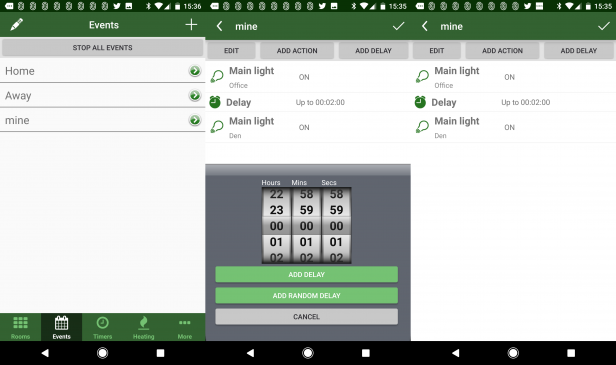 If you prefer, you can manage everything through the dedicated web portal. This apes the app’s features, but gives you a bigger interface to play with, which can make changing settings easier. 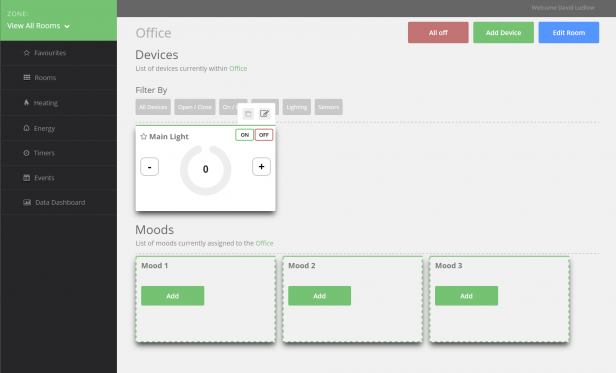 Alexa, via the Amazon Echo, is the only home assistant supported by LightwaveRF. The dedicated Skill is great, letting you turn devices on or off, or set the dim level with your voice. It works accurately and quickly.
IFTTT channels are available separately for lighting, power and Events. Each channel only has Actions, rather than Triggers, but it means that your LightwaveRF kit can be activated automatically by other smart home kit.

SmartThings integration isn’t directly available, but the active developer community has stepped in. Provided you have a spare Raspberry Pi, Adam Clark’s integration is an excellent, robust and fast way to control LightwaveRF via SmartThings.

Inside your home, LightwaveRF is quick to respond via any method. Using apps, wireless controls or physical controls, lights and sockets respond with no perceivable delay. When you move outside of your home, the app switches to away mode, which uses cloud communication to talk to your link. This adds a slight delay to any actions that you take, although the few seconds’ wait isn’t bad. 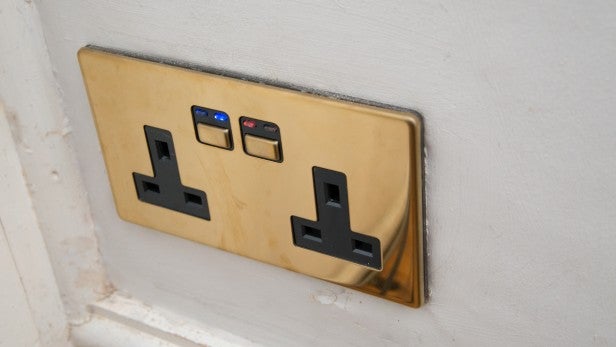 The one minor issue is that LightwaveRF lighting and power products are stateless. This means that you can’t tell from the app (or another source) whether a device is turned on or off, or what the current dim level is. So, you can’t check from the app if you left a light on or not. If you’re worried about that, you can either toggle a light on and off to make sure, or set an event to power everything down.

Being stateless also means that LightwaveRF has no idea if a command has succeeded. This can lead to the very occasional failed command, particularly when you’re using the app outside of your home. Rival devices such as the Philips Hue report back the current state, so can check that a command was sent.

That said, LightwaveRF is exceptionally reliable and I’ve experienced very issues, with lighting and plugs always responding. The final thing to note about LightwaveRF is that, since it replaces existing switches, you can’t get colour-changing lighting or anything else fancy, as you can with smart bulbs.

Should I buy the LightwaveRF Home Automation?

There’s nothing else quite like the LightwaveRF, and I have to say that I’m a huge fan of the approach. Having dedicated controls to operate lights and devices is often the most convenient way to go: entering a room, for example, it’s easier to hit a light switch than fumble for a phone or ask Alexa. LightwaveRF makes gorgeous switches and sockets, too, way ahead of the plastic controls that you get for the Philips Hue. That’s important if you want your home to look as good as it is smart.

The downside is that you need to physically wire in the switches, which may be a step too far for some people. In this case, Philips Hue is the better alternative, particularly if you want colour- or temperature-changing bulbs.
For me, the staggering number of ways to control LightwaveRF devices, from wireless switches to motion sensors, makes this one of the most flexible systems around. If you want great-looking controls on show, with a smart system underneath, LightwaveRF is the system to buy.

A smart, flexible home-control system, the Lightwave RF is the best choice for those who want good-looking controls and smart features.