So it seems like Big Robot has a bit of a hangup about machines rising up and taking over the planet. The British developer first came to our attention with the tongue-in-cheek survival title Sir, You Are Being Hunted and now Jim Rossignol’s team has returned to the subject of killer robots with The Light Keeps Us Safe. Although this time around, there’s less tongue and more full-on terror.

At this stage in development, your introduction to the game world is rather stark and straightforward. No cutscenes or anything flash; just a simple message stating that you’ve been squirreled away in a bunker for some undisclosed amount of time, hiding from ‘the machines’. Your task is to head outside and scavenge any necessary resources, before returning to safety.

To say that this bunker was a bit of a hovel would be an understatement. Stark concrete walls, litter all over the place, suspicious-looking puddles, a constant sense of dread; being a northerner, I felt right at home.

As you begin to explore, the disembodied voice of a Scottish lady occasionally sparks up without any warning to offer guidance. Either that or mutter melancholic opinions on your current predicament. ‘You got to hide down there for so long, but now you have to deal with them all alone,’ she grumbles, in one of her more cheery observations. You can practically picture her swilling from a bottle of Buckfast as she dispenses each golden nugget of wisdom. 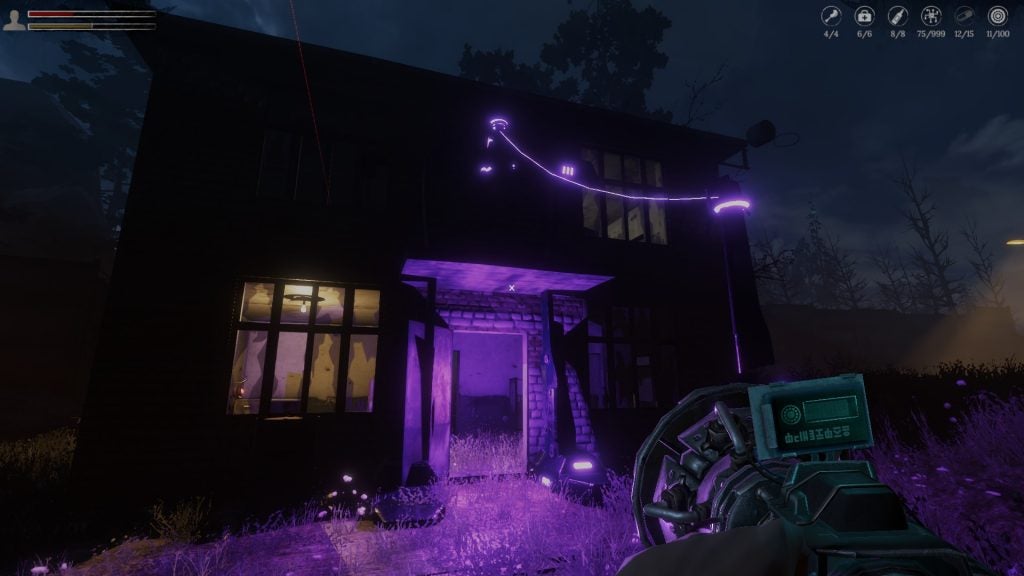 One useful piece of advice she dishes out between the general misery and depression is the fact that those ominous machines really don’t like light. Luckily enough, you just happened to stumble across a modular flashlight that someone left lying around the place. This torch is your only form of weapon, and you’ll also need to upgrade it to progress deeper into the game. More on that in a moment.

After a bit of one-sided banter with Slightly More Depressing Nicola Sturgeon, you venture forth from the bunker. By this point the anticipation has built to stomach-churning levels. I found myself equally excited and terrified about the prospect of exploring this ruined world. I couldn’t help but think of that memorable moment in Fallout 3 where you step out into glorious sunshine for the first time in your life. Except in The Light Keeps Us Safe, there’s no such sweet relief.

This is a world that’s been utterly ravaged by our robot overlords. Pervading darkness hangs over a barren landscape, overrun by foliage and littered with broken structures – the last remnants of human existence. As if that wasn’t bad enough, your next clue that we’re fast approaching brown trouser territory is the rather telling name of this area: ‘The Bleak Road’. Bleak is right, my friend.

At this stage, you’re basically left on your own to figure things out. Even the depressing Scottish lady scarpers, which to be honest is more of a blessing than anything. Your only clue is a message that flashes up, telling you to fetch some component pieces back to the bunker. These can then apparently be used to upgrade your flashlight.

If you want to try out The Light Keeps Us Safe for yourself, I’d personally recommend not reading any further and going in as cold as possible. Part of the ‘joy’ is definitely exploring the world for yourself, without any hint of what awaits.

Much of my time outside of the bunker was spent creeping between bushes or darting across open areas, glancing all around for ominous red lights. If you see red, that’s most definitely a very bad thing indeed. All of the game’s enemies sport a crimson glow, while some scour the area with a blood red spotlight, searching for fresh meat to frazzle. You can usually spot them a distance away, through that persistent gloom – so you know just when to do one, dashing off to safety.

Bad Robot has absolutely nailed the audio side of this horror show. Each type of sentry gives off a distinctive sound, be it a sinister hum or horrifying crackle. Occasionally you’ll hear one of the metal gits suddenly appear right outside of the tiny shack you’re crouched inside of, and it’s absolutely petrifying. Enemies always seem to lurk about in your immediate vicinity, until the mechanical creaks and hisses push you over the edge. Do you stay hidden and pray that they drift away? Or do you leap out, dazzle them with the torch and leg it away? 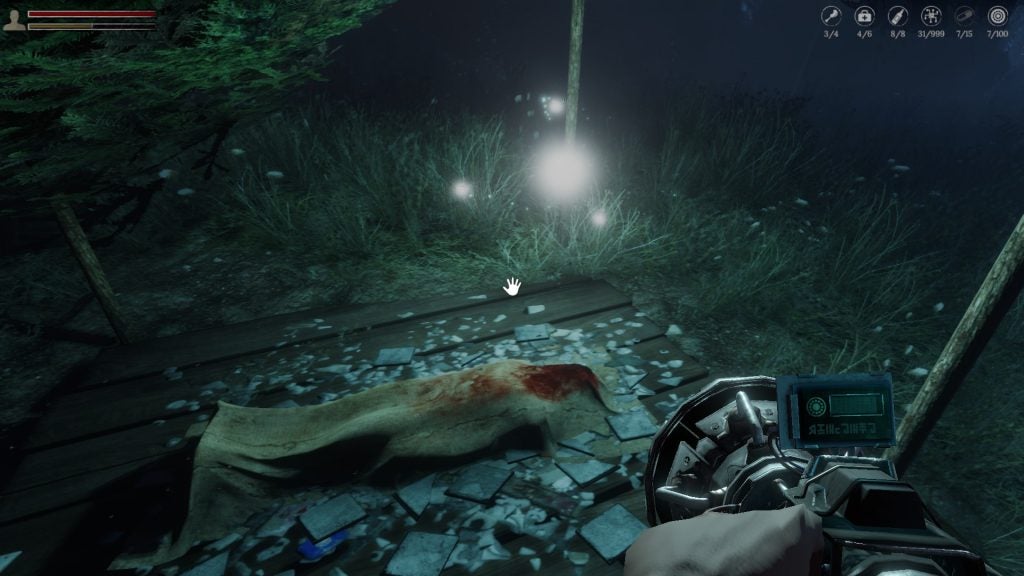 The floating orbs are one of the earliest enemies that you encounter. You can only disable them for a very short span with your flashlight, before they kick back into life and hunt you down. Thankfully they seem to give up the chase rather easily, at least in this early build, while a well-aimed glass bottle proves a simple diversionary tactic.

Other foes include enormous lightning turrets, which can be deactivated by pulling their switches. Although to do so, you’ll have to get terrifyingly close – and if you’re snagged in their spotlight, you’ll be lucky to escape with your life. If you suffer from arachnophobia, chances are the spider bots will serve as a particularly effective laxative.

The further you progress, the more imposing these enemies become. Soon you’ll have to watch the skies as well as the ground, as enormous hovering spacecraft lazily drift by. Get caught in those beams and you’re basically done for.

Inevitably, you’ll pick up injuries as you stalk about the wilderness and encounter robot foes. At any point you can return to the bunker, where your health bar gradually refills, or in emergencies you can fix yourself up with any medical aids that you happen to scavenge. Likewise, you regularly need to scoff down whatever rotten remains you’ve harvested to replenish your stamina. All the better for legging it from killer robots. In this preview build, these items are in plentiful supply, so you don’t have to worry about being stingy.

You can also collect hovering balls of light as you roam around, with a number of them scattered about each area. While the source or purpose of these glowing orbs isn’t initially explained, you can make your own connections before too long.

One potential issue I noticed early in my playtime was the complete lack of a map. Thankfully, a shining blue beacon marks out your bunker, so you can usually find it without too much stress – as long as you don’t wander off too far. However, as most of the game world is simply a large stretch of trees and scrub, with little in the way of distinguishing features, it’s all too easy to get a bit lost. 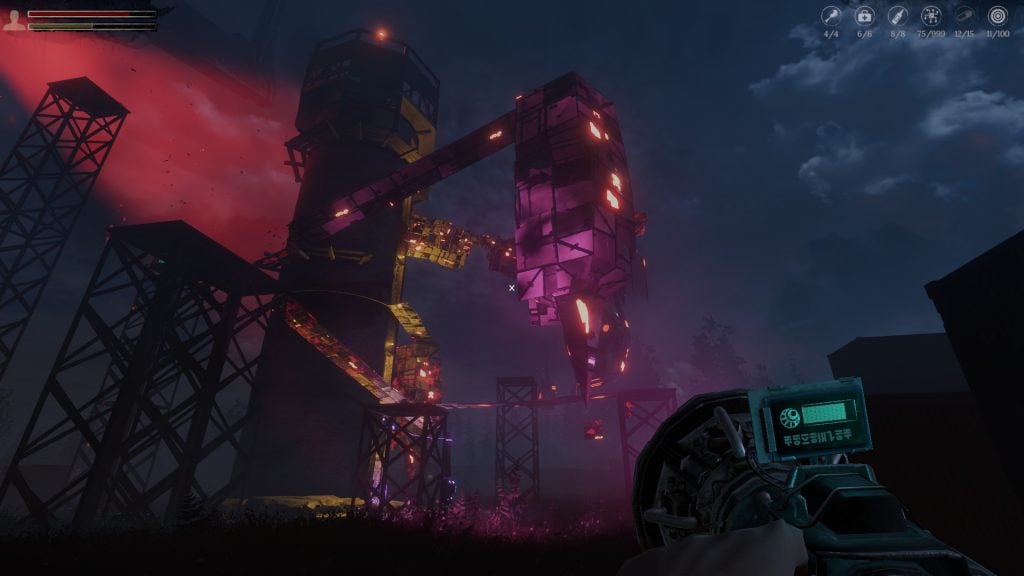 Those components you need to gather can be harvested from large chugging generators, which are normally found inside buildings or on top of random structures. Grab enough bits and bobs and you can upgrade your torch, adding fresh abilities. For instance, the charger beam allows you to power up mysterious structures and gain access to new areas, while the revealer beam can be used to – perhaps unsurprisingly – uncover hidden paths or bridges.

Every upgrade opens up a whole new area, which each time is procedurally generated. For the most part these have some horrific name like Corroded Streams, but to be honest they’re all quite samey – at least, so far in our time with The Light Keeps Us Safe. Occasionally you’ll come across an arrangement of buildings like a tiny village, or a massive tower that can be climbed, or a swamp that hides treasures. A bit more variety would have been appreciated, though, to really encourage progress. Especially as gameplay rarely switches up from ‘explore, scavenge, do a runner’. Still, the torch abilities are occasionally used to solve simple puzzles or uncover secrets, which can be quite satisfying.

As for the graphics, those are definitely more functional than awe-inspiring. The bulk of the game plays out in the dark, with audio playing more of a key role than the visuals. Still, there’s plenty of atmosphere as you stalk about the desolate areas, with distant lights beckoning you onwards – or scaring you into turning away.

The Light Keeps Us Safe is a gripping experience in this early form and one that’s recommended for fans of tense survival titles. Here’s hoping a bit more polish will turn it into a truly accomplished experience.