Chances are your current phone looks like your last phone and in turn it will look like your next phone. With the introduction of Ultrabooks the same could be said for laptops in a few years, while TVs continue their evolution into a single, wafer-thin piece of glass. We’re not saying these transformations aren’t desirable, or at least understandable, but it is getting a bit dull. One sector where there is still room for design creativity is audio with unusual speakers and docks appearing on a regular basis and Libratone exemplifies this more daring dynamic to the full …

Following on from its impressive if expensive Lounge, it has launched the Libratone Live – a smaller, relatively more affordable, equally stylish speaker for your iPhone or iPod. In tech spec terms this means dimensions of 47 x 19.5 x 15cm and 6.5Kg verses 100 x 22 x 12cm and 12Kg, £599 verses £1,099 and the same premium build materials with a casing primarily made of wood and covered in wool. Most intriguing, however, is that despite the size and cost differences the Live matches the 150W output of the Lounge and that makes it a very interesting product indeed. 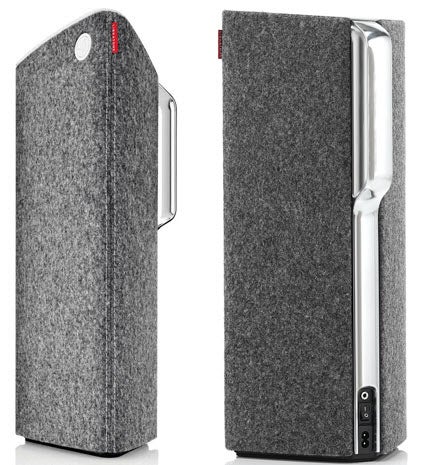 Before we get to audio though, let’s get back to style. Coming from the same family the Live may look like the Lounge, but otherwise it looks like no other speaker on the market. Taking it out the box you are initially struck by the weight (it is 300g heavier than a Zeppelin Air), but this quickly gives way to curiosity when you realise what appears to be a wool cover is in fact the finish of the speaker itself. This doesn’t immediately make a strong first impression – our unit was covered with pieces of foam from its packaging which had to be meticulously picked out – but you quickly warm to this softer, tactile surface which gives it warmth and even friendliness that is lacking from the myriad of cold, piano black devices that flood the market. It is as if a Toblerone packet and a teddy bear had offspring.

As mentioned, this finish is common to the Lounge, but where it differs for its big brother is its portrait orientation (which despite its overall size gives it a footprint smaller than many speakers) and a Chrome handle on the rear which provides an element of portability. Minimalism is again central to the Live with a 3.5mm jack the only input and no dock or device charging available. Instead how the Live connects is with AirPlay. Apple’s lossless, wireless streaming protocol is a wonderfully elegant and dongle-free technology, but can be frustratingly complex to setup. Thankfully, given the Live’s lack of other connectivity, it has produced the most intuitive process to date (see video above), so you’ll be up and running within minutes.

All of which means the Live is stylish, well made and intuitive, if sparsely featured but for £599 (£699 if you choose an optional cashmere wool finish) the sound needs to be remarkable – and, to an extent, it is…

As you might expect for such an outlay, the Libratone Live doesn’t sound like any ordinary dock. It matches the Lounge’s 150W power and is comprised of five dedicated amps powering a 5in bass unit, a pair of 3in midrange drivers and a pair of 1in ribbon-based tweeters. These are arranged around the Live’s triangular circumference to maximise dispersion and create a wide, room filling sound. Unsurprisingly Libratone dubs this FullRoom, the notion being sound waves are sent in multiple directions so they reflect off all walls and eliminate the need for a sweet spot.

The company then goes a step further with a free Libratone app (currently available for Android and iOS) which allows FullRoom to be tweaked depending on position (Neutral, Shelf/Table, Floor) and precise distances entered for its distance from surrounding walls. In addition different ‘Voicing’ (think graphic equalisers) can be applied from ‘Neutral’, ‘Soft and comfortable’ and ‘Easy Listening’ to ‘Rouse the House’, ‘Jazz club’, ‘Movie Time’ and ‘Live concert’. Each has a helpful description explaining what it provides: Rock the house, for example, means “extra drum kick – smooth midrange”. The app also acts as a remote control (no remote is supplied) and for applying firmware updates. Libratone has Mac and PC software in the works. 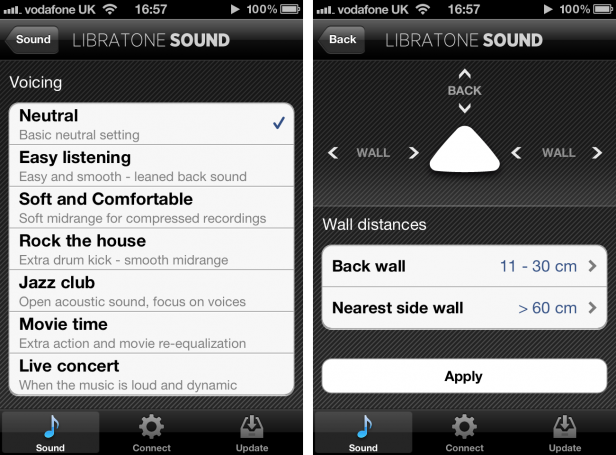 We like the theory and the reality is excellent too. The Live goes after established high end docks like the Zeppelin Air and Arcam rCube and it is right at home in this company. Audio reproduction is clean and precise, there is plenty of kick to the bass and easily enough volume to fill a large room. Tweaking the voicing does make a difference and the Live is equally comfortable playing hip hop, heavy metal, dance or classical music. Sound also holds together at maximum volume, though it compromises a touch of bass to achieve this. Combine with the small footprint and unique styling and Libratone appears to have hit a home run.

Except it hasn’t. For all the talk of FullRoom, we found sound separation to be lacking. The Live certainly does ”fill” a room and Libratone is right that it reduces (if not totally eliminates) the need for a sweet spot, but there isn’t as strong a sense of stereo separation as we’d like. This is a fault shared by the Zeppelin Air, but B&W’s dock is louder (despite the same 150W rating) while the rCube excels at sound separation and matches the Live’s volume (despite being rated at 90W). Furthermore both the Air and rCube have wireless streaming, work as docks as well as speakers, come with remote controls and the rCube has a built in battery for up to eight hours of playback. With a £599 base price the Live is also £100 more than the Air and £250 more than the rCube. 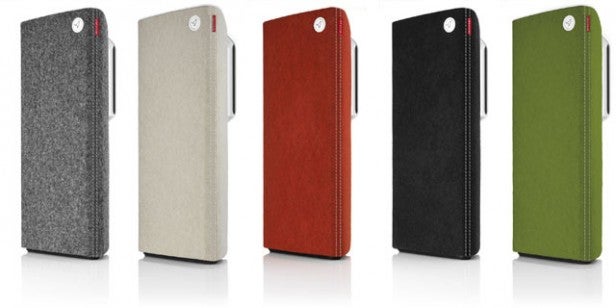 ”’Verdict”’
The Libratone Live is a beautifully styled and refreshingly different AirPlay speaker. Its AirPlay setup is the most intuitive we’ve seen, its smartphone app is well featured and sound quality is clear, loud and successfully lives up to the billing of Libratone’s ‘FullRoom’ audio technology. Where there are problems are the lack of features and high price. £599 (£699 with cashmere wool) makes the Live overpriced compared to equally competent, better value and more functional rivals like the Zeppelin Air, Arcam rCube and Soundfreaq Sound Stack. Despite this we are loathe to write-off the Live. It is an excellent speaker and those who can afford the outlay in order to chase a design aesthetic without sacrificing audio quality will be thrilled.