WebOS 2.0 is the 2015 version of LG’s ground-breaking and brilliant webOS smart TV operating system first unveiled last year. The question is, does it improve substantially on its predecessor, or has it merely wallowed in its own brilliance and allowed its rivals to catch up?

Aesthetically, very little has changed for version 2.0 of the webOS platform. It’s still defined by its fetching strip of colour-coded “folder end” icons overlaid over the TV picture, and this layout still does a superb job of combining economy of screen real estate with legibility and user friendliness.

As you move along the “folder” icons, the selected one pops up higher than the others to make where you’ve navigated to instantly obvious. At each end of the opening row of links sit well sign-posted links to further content. Moving to the left gets you to your most recently used apps and sources. 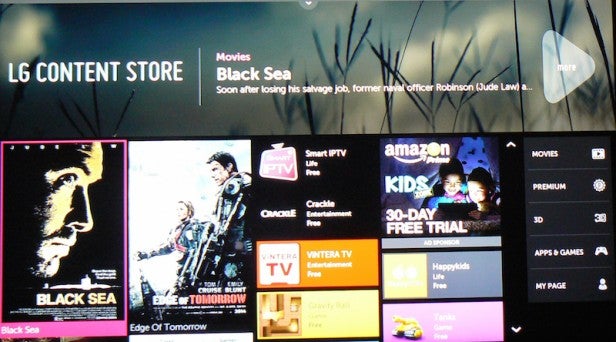 One key webOS innovation is that all your sources – even your individual AV inputs – are now treated as apps too, so they can be seamlessly integrated into the webOS environment.

Moving to the right gets you to a long list of shortcuts, taking in everything from access to content on your external DLNA sources, a built-in help system, a web browser, games, “second-tier” content apps and so on.

The icons initially present on the main homepage are carefully selected to focus on what most TV users want to use on their TV. Amazon, Netflix, the TV tuner, YouTube, for example. Crucially, the list can also be customised to suit your own preferences. Just “pick up” a favourite app from the far right of the webOS app strip and shift it along to the left until it reaches the point in the Home Hub strip where you want it to sit.

Only a couple of differences from the original webOS make their presence immediately felt on the homepage – and they’re both welcome.

First, it’s immediately noticeable how much quicker and slicker the navigation process feels. This is in terms of both the responsiveness of graphics when navigating and the speed at which the TV boots any menus or apps you select.

It’s possible that this speed will vary according to the TV you’re using. We tried it on two high-end models: the 55EG960V OLED and the 65UF950V LCD. LG assures us, however, that webOS 2.0 should boot more quickly and run more slickly across pretty much its whole 2015 range – and we haven’t seen any evidence yet to suggest that this won’t prove to be true.

The other obvious change for webOS 2.0 is the addition of a My Programmes folder option on the homepage. This turns out to be an exceptionally easy to populate Favourite Channels menu, which, once you’ve spent a few moments setting up, proves a much faster way of accessing preferred channels than trawling through the Electronic Programme Guide.

A search for further differences doesn’t uncover much more. The Content Store, from where you can find and download extra apps to your TV’s webOS environment, is much improved. It actually works in full this year, and also tries to inject some life into its rather humdrum functionality in the imaginative way it finds and presents highlight apps.

The only other “big” change is that LG has taken a stab at integrating the TV’s setup menus into the webOS 2.0 environment. A settings button on the remote and a cog icon in the top corner of the webOS homescreen call up some cool-ish icons that provide links to deeper menus for all the main TV setup areas.

The problem is that, aside from the colour coding of the menu graphics, the whole thing feels a bit bolted on. The fact that it takes a number of button presses to navigate to where you want to go underlines just how far removed it is from the near-instant access of the main webOS interface.

This is certainly an area where webOS 3.0 could seek to take the user experience to yet another level. However, at the same time, we can understand LG’s reluctance to allow anything used as rarely (except by TV reviewers!) as picture, sound and network setup menus interfere with the important day-to-day business of simply finding and watching content. 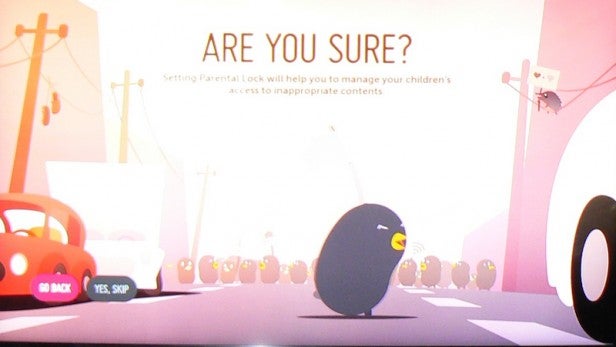 One last notable feature of webOS is that it enables the TV to offer genuine multi-tasking, with multiple apps able to remain open at once for near-instantaneous switching between them. This is made possible by webOS’s approach of treating everything – even the TV tuner and each HDMI input – as its own app.

So you could, for example, be watching something on Netflix and then decide to switch to the TV tuner to catch up on the news. Once the news is finished, you just choose the Netflix app – the stream you were previously watching is immediately back on-screen, paused in readiness for you to resume watching where you left off. There’s no need to wait for the Netflix app to boot from scratch again.

It’s hard to convey in words just how cool such multi-tasking is in a TV environment, but rest assured that once you’ve experienced it, it makes any TV that doesn’t offer similar functionality feel primitive.

When it comes to content, webOS 2.0 is a good, rather than great, effort. As noted in passing, big-hitters such as Netflix, Amazon, the BBC iPlayer, YouTube, Wuaki.tv and Demand 5 are all present, along with the Now TV service that still seems to elude other smart TV platforms. The problem is that there’s still no support for All 4 or ITV Player, despite these now being present on all the other major brands’ smart TV platforms – sometimes as part of Freetime or YouView “apps”.

Used as the main TV for the review period
Tested for more than a week
Tested using industry calibrated tools, discs and with real world use
Tested with broadcast content (HD/SD), video streams and demo discs
Next
Setup and Performance Review