The LG UP970 is the company’s current 4K Ultra HD Blu-ray player. It provides most of the functionality you’d expect from a UHD disc spinner, but its big selling point is support for Dolby Vision. In fact, at current prices, the UP970 is the cheapest way to get Dolby Vision support on a 4K player.

LG UP970 – Build Quality and specifications

The LG UP970 isn’t going to win any design awards, and is essentially a black rectangular slab. It’s composed primarily of plastic, so the build quality is functional rather than solid. 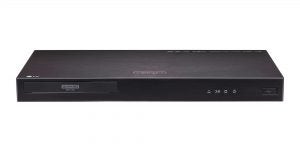 LG was clearly more interested in delivering the UP970 at a specific price point, and this cost-conscious approach extends to the front, with no display and almost no controls apart from eject, play/pause, stop and power on/off.

These buttons are quite flimsy, and because they use icon shapes and are dark silver, they’re actually rather difficult to see.

The controls sit over on the right-hand side, along with a single USB port behind a removable cover and a power indicator. The disc tray is over on the left, and while it slides in and out reasonably smoothly, it isn’t particularly quiet – which rather reinforces the feeling that this is a player built to a budget. 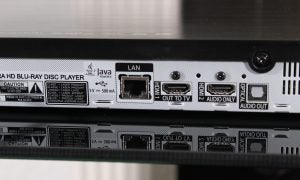 Aside from the USB port on the front, all the other connections are around the back. Here you’ll find two HDMI outputs: one is 2.0 with HDCP 2.2 support, the other is HDMI 1.4 for those with older soundbars and receivers.

There’s also an optical digital output and an Ethernet port, but no analogue connections of any kind. The UP970 also has built-in Wi-Fi, but there’s no support for Bluetooth. 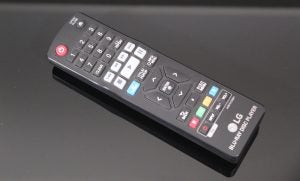 The included remote control is made of black plastic, and sports a brushed metal effect that matches the player. It’s relatively small but effective, with all the buttons you’ll need.

The buttons are sensibly laid out and nicely balanced, with the most frequently used controls situated in the centre. It’s just as well the UP970 comes with a decent controller, because it doesn’t support any remote apps.

The LG UP970 is actually a fairly basic player when it comes to features, which rather reinforces the feeling that LG’s priority was Dolby Vision support, with the rest of the player largely an afterthought.

Since Dolby Vision support is so important, it’s frustrating that it took LG so long to actually deliver the player’s main feature. Dolby Vision was added via a firmware update last August, although LG almost immediately rolled that update back. So the final corrected version of the firmware wasn’t released until earlier this year. Still, better late than never.

The Up970 supports the standard Dolby Vision profile used by LG’s Dolby Vision-compatible TVs. However, if you own a Sony TV that supports Dolby Vision, then the UP970 won’t be your best choice. It doesn’t support the special profile required to actually make Dolby Vision work on Sony’s TVs.

If you’re wondering what Dolby Vision is, it’s a proprietary version of High Dynamic Range (HDR) that uses dynamic metadata to change a disc’s peak brightness from scene to scene. This should result in greater detail in the darker and brighter parts of the image when compared to standard HDR10, which uses a single peak brightness number for an entire film.

In terms of other features, the UP970 obviously supports 4K Ultra HD Blu-ray, along with CD, DVD, Blu-ray and 3D Blu-ray. The player includes upscaling, too, which means you should be able to get the best out of lower resolution disc formats. 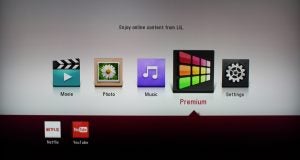 Along with 4K, HDR10 and Dolby Vision, the UP970 supports a wider colour gamut in the form of the BT.2020 colour space. It can also convert HDR into Standard Dynamic Range (SDR), using proprietary algorithms to map content to the brightness and colour space capabilities of older 4K TVs that don’t support HDR.

HDR10+ is an open-source version of HDR that also uses dynamic metadata, but the UP970 doesn’t support this feature – and, as far as we’re aware, LG has no plans to add it. Since there are currently no discs that include HDR10+, the player’s lack of support is largely academic at the moment.

The UP970 allows for USB playback, but it doesn’t support DNLA so you can’t stream from your home network. The player apparently supports Simplink, but we found the CEC features to be very limited. Plus, even with an LG TV, there was no control interaction between it and the player. 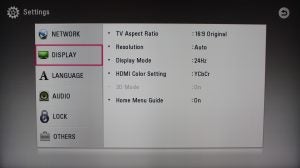 The player does support video streaming from Netflix and YouTube. However, disappointingly, that’s your lot because there’s no store available to add any more apps.

It can convert Dolby and DTS to LPCM, down-convert multichannel audio to two-channel, and re-encode other audio formats as DTS. Although it would be more useful if it could convert DTS to Dolby, given the lack of DTS support on many soundbars these days.

The UP970 isn’t certified as a Hi-Res Audio product, but it does support high-resolution audio (up to 192kHz) including file types such as MPEG 1/2, MP3, WMA, AAC and FLAC.

Finally, if you want to look at photos then it can support JPEG, GIF, PNG and MPO file types.

The LG UP970 is simple to set up, mainly due to a lack of options rather than a slick user interface. The homepage looks antiquated, with the option of choosing between Movies, Music, Pictures, Premium or Settings. All the Display controls are in the Settings section and the default options are probably best, but make sure the Display Mode is set to 24Hz for movies.

The player is reasonably quiet in operation, but that will depend on the type of disc you’re playing. Ultra HD Blu-rays are definitely noisier because they spin faster, and some discs are noisier than others. Disc loading is fairly fast, the navigation and playback suitably responsive, and the UP970 played all the discs we tried without any issues.

The player remembers where you last stopped playing a disc, which is useful, but otherwise the UI feels very basic. When loading or stopping a disc the screen goes white, apart from a logo in the corner related to the type of disc you’re playing, which looks rather old-fashioned and makes the UP970 feel like an updated LG player from a few years ago (which it probably is).

The complete lack of any CEC features is annoying, because turning the player on doesn’t turn on the TV and if the TV is already on, it also doesn’t detect the UP970 via the HDMI input when you turn the player on. This was despite testing the UP970 with an LG TV, and the only benefit that Simplink appeared to actually offer was the ability to control the TV volume using the player’s remote. 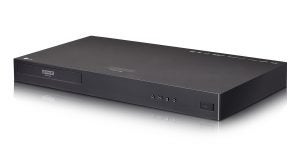 The UP970 doesn’t support DNLA, so you can’t stream content from your home network, but you can via USB.

The Premium section is where you’ll find the video-streaming apps but, as mentioned, these are limited to Netflix and YouTube. That’s pretty lame, and since there’s no app store, you also can’t add any more.

At least the two available apps support 4K, HDR and Dolby Vision in the case of Netflix. But if you’re looking for an effective digital hub, the UP970 isn’t for you.

The LG UP970 is an excellent performer when it comes to disc playback, with Ultra HD Blu-rays appearing flawless and delivering all the improvements that the 4K resolution, wider colour gamut and higher dynamic range of the format has to offer.

The images the player renders are detailed and sharp, with natural colours and no apparent artefacts or other aberrations. As a result, a reference disc such as Dunkirk looks superb.

However, make sure that in the Options menu (accessed by pressing the Info/Menu button whilst a disc is playing) you’ve selected the Standard picture mode. This outputs exactly what’s on the disc, rather than manipulating the signal – and, thankfully, Standard mode is the default setting.

The big selling point of the UP970 is that it supports Dolby Vision and, now that the firmware has been updated, the player handles Dolby Vision discs without any issues.

The LG plays the discs flawlessly, with the TV (assuming it supports Dolby Vision and isn’t a Sony) automatically detecting the Dolby Vision signal and going into the correct mode. The playback of Dolby Vision discs is superb, with a film such as Black Panther delivering plenty of fine detail and subtle improvements in the shadow detail and bright highlights. 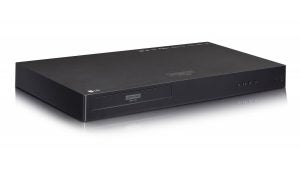 The UP970 also handles regular Full HD Blu-rays and streaming very well, with SDR images that are accurate and convincing, retaining natural colours and plenty of dynamic range. The upscaling also ensures the image is clean and free from any unwanted processing, making a movie such as Rogue One look so good that you’d swear it’s 4K.

This effective upscaling extends to standard-definition DVDs and streaming, although the image is never going to look as good as Full HD and 4K, especially on a larger screen size.

We find it hard to watch standard-definition content these days, regardless of the source, but if you need to then the UP970 can at least upscale it effectively. The LG also did a decent job of converting HDR to SDR, although there are better choices if your TV doesn’t support HDR.

The UP970 is essentially a digital transport, in the sense that it has no analogue outputs. That means there are no DACs, just a digital signal being delivered either via HDMI or the coaxial digital output.

Whichever you choose, the player is highly competent – although you’ll need to use HDMI if you wish to benefit from lossless audio and immersive Dolby Atmos or DTS:X soundtracks.

It’s fair to say that LG didn’t design the UP970 to be an audiophile disc player, but it’s certainly capable of delivering a decent audio experience from two-channel music and multichannel soundtracks.

The LG UP970 offers excellent value for anyone wanting a decent Ultra HD Blu-ray player that also supports Dolby Vision. In fact, the LG is the cheapest way of playing Dolby Vision discs, although it might not be ideal if you own a Dolby Vision-capable Sony TV.

The real downside to the UP970 is that, aside from disc playback, it’s fairly limited in terms of features, with only two video-streaming apps and no way to add others. It does at least have fairly comprehensive file support over USB, but the lack of DNLA support is frustrating.

LG does make two other 4K players in the shape of the UBK80 and UBK90. However, since both are more expensive at £178 and £249 respectively, and neither appears to offer any benefits over the UP970, we really can’t see any reason to buy them.

In fact, the best alternative, especially if you already own a Sony Dolby Vision TV, is the Sony UBP-X700, which you can pick up for just under £200. It isn’t the best-made or flashiest of players, but it does support Dolby Vision and also adds SACD playback, while its user platform offers more streaming apps.

The LG UP970 is a decent player that, while somewhat limited on the feature front, delivers an excellent playback performance at a cracking price. It’s also by far the cheapest way of getting Dolby Vision support.

Steve Withers
Steve Withers is a professional calibrator and freelance journalist who regularly contributes to Trusted Reviews, reviewing audio and video products, and writing articles. Steve has been writing about…