What is the LG Stylus 2?

It’s been a curious year for LG’s smartphone department. The likes of the LG G5 and LG X Screen hint at a manufacturer that’s obsessed with finding an angle – anything different to make its offerings stand out from the crowd.

With this comes the LG Stylus 2 – a mid-range phablet with a couple of stand-out features. But is an improved stylus and a DAB+ radio enough to recommend it over other sub-£300 Android phones?

Given the strength of the field, and a couple of underwhelming components, I’d suggest not.

WATCH: What’s the best phone you can buy?

LG showed it was capable of something approaching premium, forward-thinking design with the all-metal LG G5, but the LG Stylus 2 is a bit of a retrogressive step. It’s much more like the LG G3, which might sound like a ringing endorsement on the surface – after all, the LG G3 was our top smartphone pick of 2014.

But of all the LG G3’s virtues, design wasn’t really one of them. It was functional and sturdy, yes, and even interesting in places. But even two years ago, it was hardly premium or even attractive.

The LG Stylus 2 shares the LG G3’s rounded back, plastic construction, and rear-mounted buttons. That final point is likely to remain a divisive one. In my view, rear-mounted buttons were an interesting experiment that should probably have been discarded by now.

It’s something you grow accustomed to with time, but the positioning simply remains less intuitive than traditional side-mounted buttons. It demands that you hold the phone in a very specific way in order to use them, which is less conducive to practical every day usage.

Also, I’m not entirely sure what the point is here. The LG Stylus 2 is fairly slim but hardly skinny at 7.4mm, and there’s ample space on its rounded plastic sides. As such, those rear-mounted buttons come across as something of a design affectation.

Otherwise, the LG Stylus 2 is a pleasant enough phone to hold in the hand. Despite its large 5.7-inch display, it doesn’t feel ridiculously big. Part of this is down to the fact that we’ve grown accustomed to “large” phones, of course. But the phone’s relative thinness and surprising lightness at 145g also contribute. 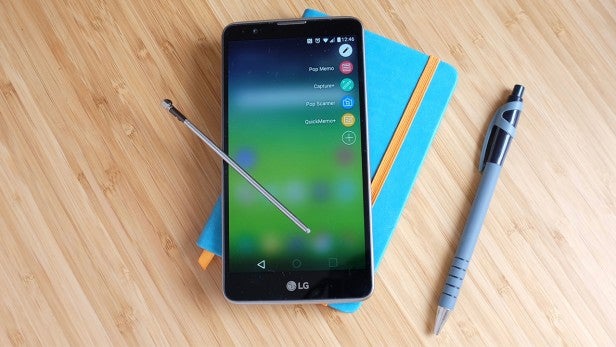 Of course, the LG Stylus 2’s main design feature is worn prominently in its name. On the top-right corner of the phone as you look head-on, you’ll find a Stylus Pen stashed away within the body.

The stylus itself boasts a nano-coated pen tip for a “real pen-like feel,” according to LG. In practice, I found that the stylus did indeed lend itself to more natural writing than many cheaper stylus options – although it should be noted that this is a “dumb” stylus with no degree of pressure sensitivity or control buttons.

I’ll discuss the Stylus Pen’s software implementation later, but in terms of design and feel, I’d say it’s somewhere in between the Samsung Galaxy Note 7 series and the Nintendo 3DS.

If you’re talking exclusively from the perspective of Android, where 5.5-inch displays are pretty much the norm, then the LG Stylus 2’s screen can only just be termed “big”.

Indeed, as I’ve discussed above, the Stylus 2’s 5.7-inch IPS LCD panel fits comfortably in the hand – although of course, even those with long fingers will need to employ their other hand for anything short of checking the lockscreen or scrolling through a web page.

It would be silly to criticise the LG Stylus 2 screen for being “too big” then, but I’ll certainly criticise it for not being sharp enough.

Despite that larger-than-average display, LG has opted for a mere 720p resolution. That results in a pixel density of just 258ppi. Practically speaking, it means that you won’t be able to watch Full HD video content on your new phablet, which is absurd. 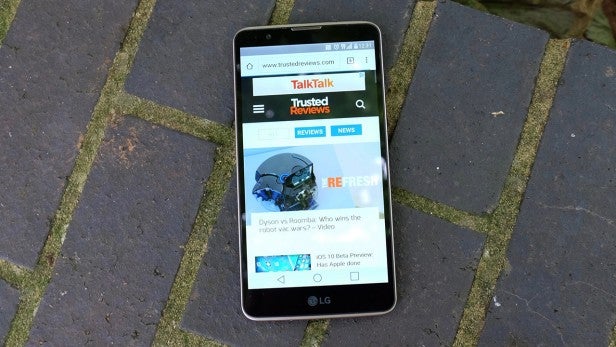 You might argue that this isn’t a premium device, and at a cost of £250 (£220 on O2 PAYG) you’d be quite right. But let’s just look at some alternative examples here. The Moto G4 and the Vodafone Smart Ultra 7 both come with 5.5-inch 1080p displays – you can argue among yourselves whether that still constitutes a “phablet” – yet both phones cost around £100 less.

I’d argue that manufacturers can no longer justify opting for a 720p resolution for any display of 5 inches or above, unless they’re going for an entry-level spec and a £100-or-less price tag.

It isn’t especially bright, though, and I found myself needing to crank up the brightness slider to 75%, even when using it indoors. Outside, you’ll need to go the whole hog if you want to be able to see anything.

This isn’t entirely unusual for a low-end phone, but I’d feel more comfortable excusing it here if the LG Stylus 2 came in at or under the £200 mark. It’s in a bit of a no-mans-land, as if you can stretch to £300 then you can start considering the likes of the OnePlus 3 and the Vodafone Smart Platinum 7 – both of which offer significantly better displays (and everything else for that matter).