We in the UK don’t get to see all the phones our US counterparts can enjoy. It’s not just because America is so ruddy huge, it’s also because smartphones headed to the states can make use of 4G connectivity, which is not yet established over here. You may not ever see phones like the LTE-powered CDMA LG Spectrum down the local phone shop, but it tells us a lot about the phones we can expect to see from LG into 2012.

In some key respects, the LG Spectrum is one of the most advanced phones we’ve ever seen.  It runs a custom version of Android Gingerbread, has a powerful dual-core processor and natty gestural controls. But the really exciting thing about this phone is its screen, which boasts a full 720p resolution spread across 4.5in. 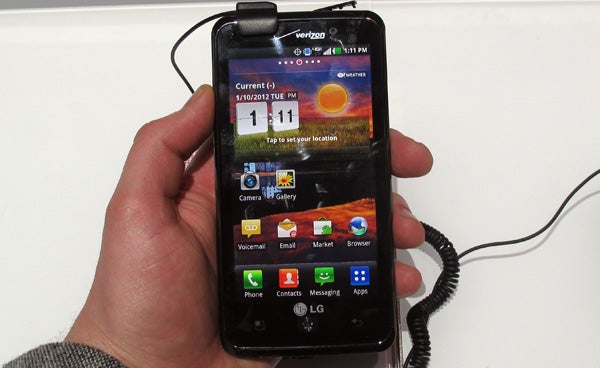 We’ve seen 720p screens before, such as that of the Samsung Galaxy Nexus, but the LG Spectrum uses an IPS-based screen rather than the Super AMOLED type seen in most other top-end mobile screens. Each screen type has its advantages and disadvantages, but this phone has convinced us that IPS might be a better solution all-round. It doesn’t tend to suffer from the colour issues of AMOLED, which often over-saturates colour and becomes cast with a blueish tint when viewed from an angle. 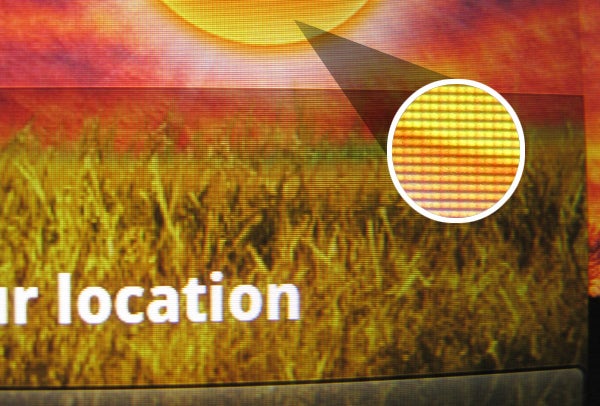 IPS doesn’t offer the same awesome black depth and sheer contrast of OLED, but limitations here tend to be less conspicuous than those of AMOLED screens.  Apple’s iPhone 4 and 4S use IPS panels, as does the iPad 2, and are the key flagships of the tech. However, the LG Spectrum’s screen is rather more advanced, offering similar pixel density at a significantly larger size. In a word – yum.

Given how great the screen is, we were disappointed to see that advancements don’t continue into the LG Spectrum’s software – at present at least. It runs Android 2.3, with LG’s custom UI plastered on top. This interface has a friendly, slightly cartoonish look, but doesn’t have the class of Google’s default Android 4.0 Ice Cream Sandwich UI, and doesn’t make the most of the impressive pixel density of this handset. We’d be surprised if LG didn’t give the Spectrum the boost up to Ice Cream Sandwich at some point, but not fitting it in at this point feels like a missed opportunity. 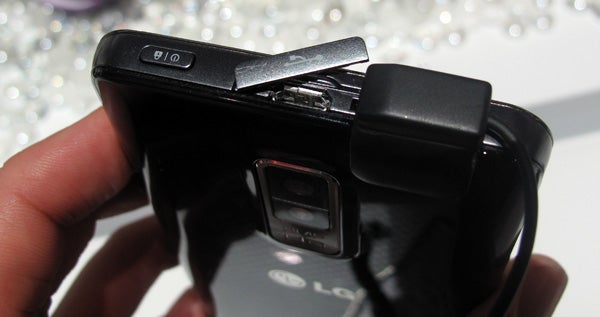 Another clue that this is a stop-gap phone in some respects is its build. Its 10.4mm shell is plastic, common in slim phones, but the glossy finish doesn’t exactly make the phone feel like a million dollars. A little texture to a phone body, or a concerted effort to make it feel as densely-packed as possible, is needed to make a handset feel like a smartphone superstar. And this one doesn’t quite.

Other specs of the LG Spectrum sit comfortably right up at the top end of the smartphone league. It has a 1.5GHz dual-core Snapdragon processor and 1GB of RAM. Quad-core tablets are already here, but quad-core phones that’ll actually sell to the general public are not. Processors like the Spectrum’s should stay pretty cutting-edge for at least a few months – a long time in the smartphone game.

The other important high-flying spec of the phone is its camera. It has an 8-megapixel sensor with an LED flash and the bonus bits of image stabilisation and face detection. Sadly, as we’ll never get this CDMA phone in the UK, we’ll probably never get to see whether the LG Spectrum trumps its 8-megapixel colleagues. 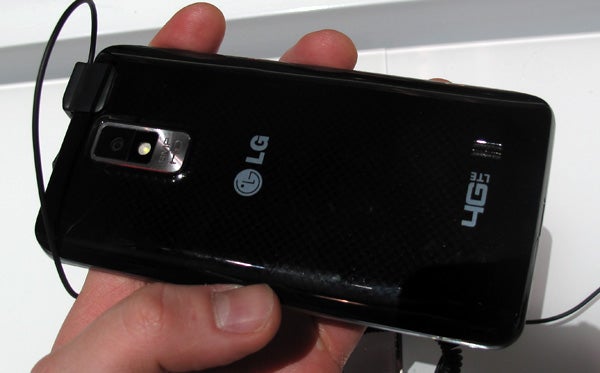 We did get to check out some neat gestural controls to make browsing through photos snazzier, though. Within the gallery app, you can use taps on the phone’s sides to flick between photos. There’s nothing too fancy going on here, as it’s simply a case of the accelerometer detecting motion coming from one end of the phone or the other, but it could become a neat feature to show off down the pub.

We can’t quite get over the feeling that the LG Spectrum isn’t quite serious or sleek enough to make best use of its top features, conjure the desirability it needs or seriously compete with the very top smartphones out there. However, the excellent HD-IPS 720p screen is something pixel freaks should look out for in future 2012 mobiles.

The just-ok plastic build, outdated OS and that it won’t come to the UK in its current form stop us from getting too excited about the LG Spectrum as an overall package, but its 4.5in 720p IPS screen is something to behold. This is tech to watch out for in 2012, as it’s arguably even better than the Super AMOLED type seen in current 720p phones like the Samsung Galaxy Nexus.