Thanks to the popularity of catch-up TV streaming and on-demand movies, ‘Smart’ TVs have taken off in a big way, and the LG SP820 is here to bring ‘Smart’ features to aging sets.

Smart TV sets are equipped with an internet connection that allows you to stream a variety of content direct to your screen without the hassle of booting up a laptop – as well as allowing you to pipe your own content from networked media servers. These web services are usually delivered through a proprietary ‘portal’ and all the big brands have their own version – Panasonic has Viera Connect, Samsung has Smart Hub, Toshiba has Places and LG has Smart TV.

But not everyone is lucky enough to have such functionality on their TV. Perhaps you invested in a new set before the connected revolution kicked off, or maybe you simply didn’t have the funds at the time – after all, these smart services can add quite a premium to the price.

If any of this applies to you, all is not lost. LG has hit upon a novel idea for retrospectively adding its internet platform to any TV. The LG SP820 is a small set-top box with a built-in Wi-Fi connection that provides access to LG’s Smart TV service, alongside DLNA media streaming and playback from USB storage devices. It’s the perfect way to upgrade your TV should you decide down the road that this whole smart lark is something you’d like to be part of after all.

The LG SP820 box itself measures a mere 200mm wide, which means it’ll slip into your kit rack easily, taking up much less space than, say, a Blu-ray player or PVR. This slim box is attractively styled in a gloss black finish with an eye catching silver underside and curved corners, plus there are no signs of flimsiness in the outer casing. There are no buttons or dials for up-close control – it’s all controlled onscreen using the Magic Remote. A gentle red light on the front denotes that the box is active.

There’s a decent array of sockets crammed onto the slender rear panel. You get an HDMI output, which is specified to handle output of 3D content (files and internet content), alongside two USB ports and an Ethernet port, which is provided for those who can’t use the built-in Wi-Fi adapter.

The LG SP820’s main attraction is the Smart TV web portal, which offers an impressive if not exhaustive range of apps. They’re broken down into Premium (all the ‘big name’ services you’re likely to use the most), 3D World and LG Smart World (a selection of more obscure video sites, games and other time-killers, both paid for and free).

It’s a decent selection from the LG SP820, and you’ll get a lot of mileage out of apps like iPlayer, YouTube and Love Film, but it’s a shame that ITV Player, 4OD and Demand 5 aren’t here given that catch-up TV is the lifeblood of any online streaming service.

Venture into 3D World and as the name suggests you’ll find a whole host of 3D videos to stream. A quick search reveals no blockbuster movies, but there are plenty of extreme sports videos, documentaries, Korean concerts, cartoons and car videos. Hardly compelling, but it’s good to have a built-in pool of 3D content to show off to your TV – and at least much of it is free.

LG Smart World’s content is a mixed bag – many of the apps we’ve never heard of and didn’t feel particularly compelled to investigate. It’s also quite annoying that you have to create an account before you can install any of them. But a couple of the games are quite fun, and it’s great to see LG offering something for all the family. 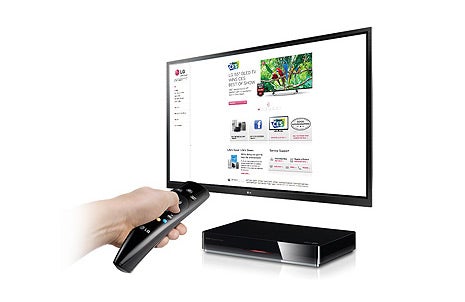 There’s also a web browser on board the LG SP820, which allows you to peruse any internet site you like, and with Flash 10 support you can stream videos too – something that not all built-in browsers do.

Away from Smart TV, the unit’s Wi-Fi connection allows you to stream your own content over a network using the Smart Share feature or using Wi-Fi Direct. After delving into our file library, the LG SP820 works smoothly and supports an impressive range of formats, including DivX, XviD, WMV, AVI, 3GP, MP4, FLV, MKV and AVCHD. You can also stream MP3, WMA and AAC, as well as JPEG photos. It works with Windows PCs without the need to install additional software, but you get a Nero MediaHome 4 Essentials CD in the box. The two USB ports on the back allow you to play the same file types from flash drives or external hard-disk drives.

Setup for the LG SP820 couldn’t be simpler. Connect the HDMI output to your TV and use the helpful onscreen displays to link the box to your network. The convenience of built-in Wi-Fi really shouldn’t be understated, as a cabled connection is clumsy and messy. Each step is clearly described using plain English and crisp, colourful graphics.

The Magic Remote is a slinky gloss-black wand (a tweaked version of the one used by LG’s TVs) that allows you to move the cursor around the screen simply by waving it in the right direction and hitting OK to make your selection (a bit like a PC mouse).

Using this remote is a wise move, as it really suits the Smart TV layout – the screen is crammed with thumbnail grids and little icons along the bottom, which are tricky to navigate with a conventional remote. It’s also a real boon when using the web browser as links are easy to select, plus text entry with the virtual keyboard is a breeze because you can zip straight to the letter you want rather than chugging through every letter to get there. 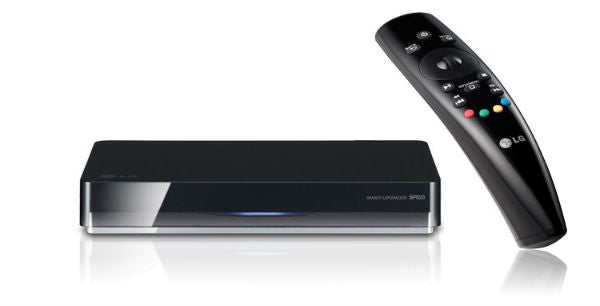 The LG SP820’s Magic Remote boasts a curvy, ergonomic shape that makes it comfortable to hold, plus there are plenty of hard buttons to call up regularly-used functions like the Home menu and Back. It also sports a direction pad for those who prefer the old-school control method, with a jog wheel in the middle that doubles up as the OK button. It’s brilliant, but if for some weird reason you don’t like the Magic Remote, then you can use your iOS or Android smartphone or tablet running LG’s Remote App to control the LG SP820 over your network.

Unsurprisingly the Smart TV menus are the same ones found on LG’s TVs and look gorgeous without compromising on practicality. The Home menu sports several panels, each one containing a selection of apps relating to that section (Premium, 3D World, Smart World). Hover over the top left panel and a door flips down – hit OK and you’re transported to the full menu, where you’ll find all the available apps. Each menu is displayed in colourful graphics – Premium uses the now familiar park background, for instance. 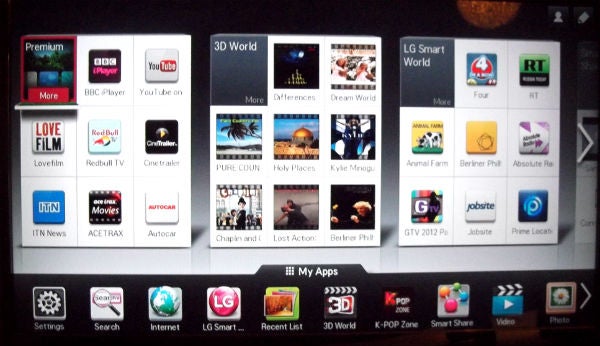 Along the bottom of the Home menu is a row of icons called My Apps, which lets you access other important menus such as Settings and Search, as well as your own video, photo and music content. It’s a tad confusing because it duplicates items in the screen above (LG Smart World, for instance) plus there’s a Smart Share option alongside individual video, music and photo options, which isn’t really necessary. As the name suggests you can add any apps you like to this list, but you can’t remove any of the duplicated icons.

Delve into the music library of a networked device and the files are listed in a clear, attractive layout with cover art and track details. You can view by song, album, artist or genre. Video playback is similarly intuitive, with thumbnails for each file. This is one of the best GUIs we’ve encountered, and we didn’t have a single glitch or hold-up when streaming music or video from our server.

And when it comes to watching videos the quality is very good indeed. The LG Sp820 delivers bold, crisp images from BBC iPlayer, for example, that look just like the live SD broadcast, apart from a breakout of block and mosquito noise when there’s some particularly frenetic movement.

It wasn’t all plain sailing though – twice during Spike Lee’s two-hour long Bad 25 documentary it stopped playing and jumped to the end for no obvious reason. It’s also slightly annoying that you can’t navigate iPlayer by waving the Magic Remote.

Elsewhere we couldn’t find any other reasons for complaint. The 3D content may not be particularly high-profile, but it looks composed and immersive. The web browser works smoothly and loads up pages quickly. Navigation is aided by the Magic Remote, with the jog wheel making it easy to scroll down the page.

With smart functionality built into most of the latest Blu-ray players and TVs, most people won’t have any need for the LG SP820. But if you want to breathe a bit of life into an older system with a glut of internet content and DLNA streaming then it’s a fantastic way of doing so.

The Smart TV GUI is both sophisticated and logical, controlled by the intuitive Magic Remote, plus its content selection is impressive, if not exhaustive. Built-in Wi-Fi, 3D support and smooth streaming of a wide range of formats are further reasons why LG’s Smart solution is money well spent.