What is the LG SoundPlate LAB540?

The SoundPlate LAB540 is a 4.1-channel soundbase with a built-in Blu-ray player, which sounds like a stroke of genius to us. Not only does this single slimline speaker boost sound quality from your TV (which sits on top), but it also spins your Blu-rays, DVDs and CDs without the need to rig up a separate player.

It’s a brilliant space-saving solution, and naturally for an LG product it’s also teeming with features and looks great. It even comes with a wireless subwoofer. At £500 it’s pricier than your average soundbase, but could be worth the expense for its clutter-busting convenience alone. 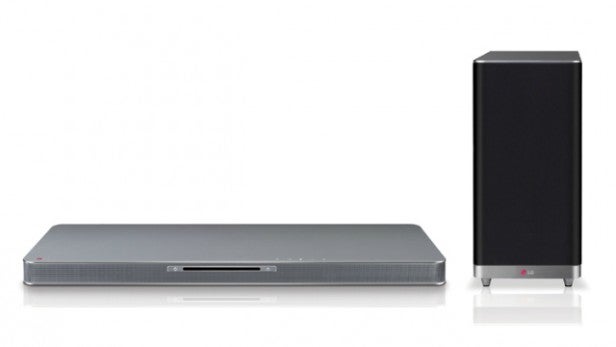 LG’s soundbase is designed to support TVs up to 55in, which explains its 700mm width. The unit supports a maximum weight of 38kg, while the top surface area comfortably fits TV stands up to 680 x 270mm. But what’s most remarkable about the SoundPlate is its wafer thin 39.5mm profile, which allows it to sit inconspicuously under your TV.

It’s not often we say this about a soundbase but the LAB540 is a stunner. Its swanky silver finish, shiny trim and fine front mesh are unusually chic, while the large LED display means you don’t have to rely on flashing lights to work out its status. The all-important disc slot sits right in the middle of the front panel.

On the back is a generous array of sockets. Although you don’t need to run a Blu-ray player through the system, LG has still provided an HDMI input for a TV box, while the optical input provides another inlet for your external devices. There’s even a USB port that lets you play media and an Ethernet port. 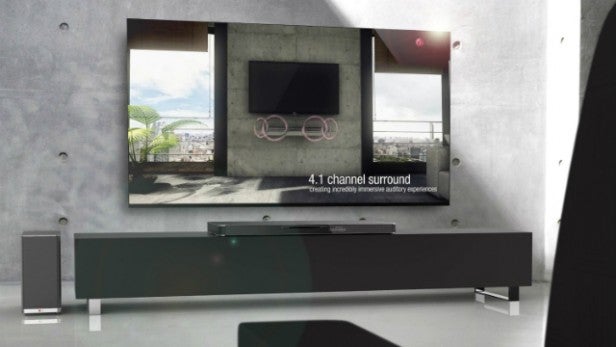 The LAB540 may be a combi but it doesn’t do things by halves – the integrated Blu-ray deck is a fully-fledged 3D-ready affair, complete with DLNA streaming, internet content and 4K upscaling. There’s built-in Wi-Fi too, making it easy to access the network features.

And on the audio side, built-in Bluetooth and SoundSync provide an simple connection to mobile devices and compatible LG TVs. There are Standard, Music and Cinema presets and full support for all the Blu-ray HD audio formats. 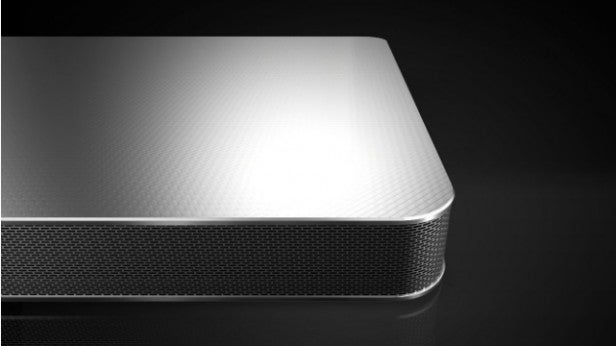 Inside the SoundPlate are four speakers – two front, two surround – each one delivering 40W of power. Throw in the active sub’s 160W and it adds up to a total quoted output of 320W.

LG’s line-up of online apps is getting better all the time, and was recently enhanced by the unique addition of Now TV and Spotify. Both are featured here alongside BBC iPlayer, YouTube, Amazon Instant Video, Netflix, Blinkbox, Knowhow Movies, Facebook and Twitter. These are housed in the Premium section, while LG Smart World offers an abundance of other apps.

You can also stream your own content from networked devices. Like the BP740 standalone player, the LAB540 supports an exhaustive range of video formats including AVCHD, MKV, DivX, XviD, MP4, AVI and WMV, and on the music side it’ll play FLAC and ALAC (including hi-res files), MP3, WMA and WAV. You can play these from USB devices too.

There are Standard, Vivid and Movie picture presets, plus a User setting that lets you tweak contrast, brightness, colour and sharpness. 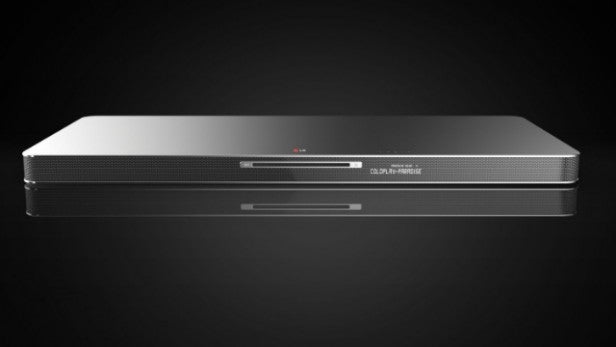 The SoundPlate is incredibly easy to install and onscreen setup is a cinch too. That’s mainly due to LG’s gorgeous-looking menus, which are painted in bright colours and use eye-catching graphics wherever possible. 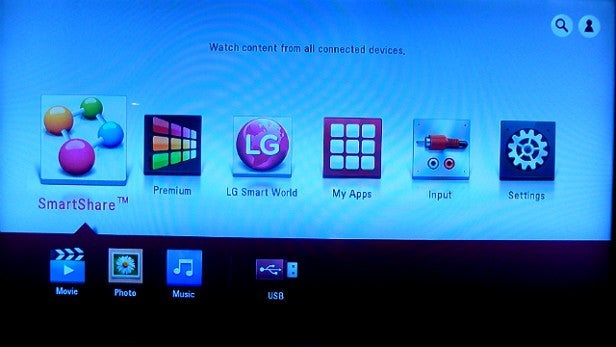 The Home menu, for example, uses a row of six large tiles that enlarge when selected, while a banner at the bottom offers shortcuts to the corresponding options. Its slick, straightforward layout will go down very well with beginners. 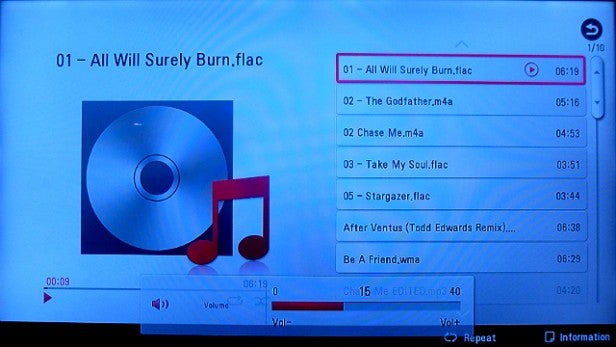 The SmartShare menu breaks content down into Music, Movie and Photo, and the excellent playback screens display metadata and cover art. Elsewhere the Premium menu lays the app tiles over an elaborate image of a grassy park – a little OTT perhaps but very welcoming. We had no trouble streaming any content.

Hitting the Speaker Level button on the remote brings up a panel of virtual sliders, one for each speaker. This makes it quick and easy to tweak the sound to your taste. Each slider ranges from -6 up to 6, except the subwoofer which goes from -40 to 6.

You can change inputs onscreen using the Input option on the Home menu, or simply toggle through using the remote’s Function key.

Talking of which, the remote is superb. It’s long and slender, with glow-in-the-dark playback keys, a nicely-spaced direction pad and volume controls placed on a hump to help you find them in the dark. The buttons are also clearly labelled and responsive, making it a joy to use.

Given its slender dimensions, we were pleasantly surprised by the LAB540’s sparky room-filling sound. It’s flawed in places, lacking the refinement and scale of the Tannoy BaseStation One and Canton DM75 (despite the best efforts of the wireless sub), but on the whole the LAB540 delivers an entertaining performance.

Movies don’t come much bigger and bolder than Pacific Rim, making it a great test for any sound system. We slid the Blu-ray into the slot and were generally impressed by its handling of the movie’s big battle scenes. The first Kaiju/Jaeger scrap off the Alaskan coast fizzes with energy – the sounds of crunching metal, crashing waves and crackling electronics are delivered with plenty of bite, while the monster’s loud roar will have you cowering behind the sofa.

The subwoofer brings decent weight to the scene, rumbling heartily as the robot stomps on the sea bed and slams its fist into the Kaiju. Don’t analyze the LAB540’s sound too closely, and you can quite happily lose yourself in the action.

However, there are some sonic issues that derail its quest for top marks. Firstly, it suffers a similar problem to Humax’s Blade soundbars in that there’s just not enough integration between the subwoofer and speakers. The best subs crossover seamlessly with the speakers, as well as disguising their position in the room – here the bass sounds separate from the soundbase, and you’re constantly aware of where it’s coming from. We tried moving it around but to no avail.

Secondly, the LAB540’s treble-heavy EQ is a little overpowering, making the action sound forced and spitty at high volumes. This bright tone becomes fatiguing after a while and does nothing to help the overall sense of cohesion.

Thankfully the LG sounds much better with TV material. Speech is clear and detailed, and the lack of bass integration is less obvious. And with music there’s a better overall balance, integration is improved and crisp treble makes songs sound open and incisive.

We can’t fault the SoundPlate’s picture performance either. Pacific Rim’s hyper-detailed CG looks sharp and punchy, while the pulsating cityscapes and cartoony colour palette blaze from the screen. Edges are decisively drawn with no digital glitching to sully the clarity. Objects move with impressive 24fps fluidity too. Don’t forget this deck also spins 3D discs, and does a terrific job bringing them to life. 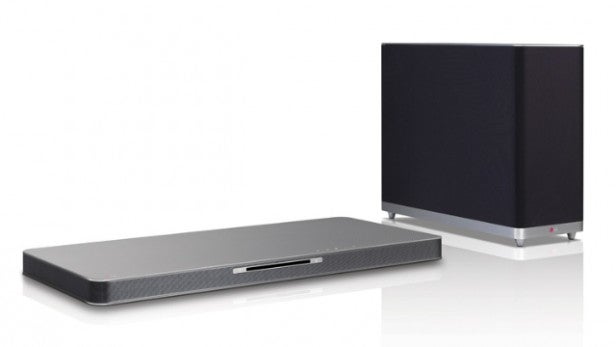 Should I buy the LG SoundPlate LAB540?

The LAB540 is a great idea brilliantly executed and deserves to fly off the shelves. Combining a soundbase and Blu-ray deck cuts down the number of boxes under your TV while boosting your TV’s sound quality, and LG has done a terrific job of combining them.

Its chic styling, generous socketry and extensive feature list make the £500 price tag easier to swallow, and for the most part its audio performance is impressive.

Only poorly integrated bass and overpowering treble prevent it from reaching the sonic heights of soundbases from Canton and Tannoy, but the LAB540 has so much going for it elsewhere that it would seem wrong not to recommend it.

LG’s clever audio solution is a godsend for anyone hoping to cut down on clutter, but it fails to scale the sonic heights of its rivals.

Next, check out our pick of the Best Soundbars and Soundbases.