Competition, it would seem, breeds innovation. For the more LG falls out with arch-rival and fellow Korean brand Samsung, the faster it improves. This is especially true where Smart TV functionality is concerned. For while Samsung initially set the pace in this key new TV area, LG has been falling over itself to catch/keep up.

The result is that whereas LG’s 2010 online TV offering lagged well behind Samsung’s, its 2011/2012 offering has caught up almost completely.

For starters, LG also uses a Smart Hub screen to provide you with a one-stop jumping off point to a large number of different sources, including, again, both AV inputs and ‘Smart’ features such as video streaming platforms and smaller apps. LG’s Smart Hub isn’t quite as slick and well organised as Samsung’s, but it’s still much better than the onscreen menus of most other current Smart TV systems.

LG has also put together a pretty inspired system for presenting all the second-tier apps you can browse through with a view to downloading. Basically the app ‘store’ appears as a virtual ‘book shop’, with icons for all of the apps – organised by genre and type – appearing on virtual bookshelves. Excellent. 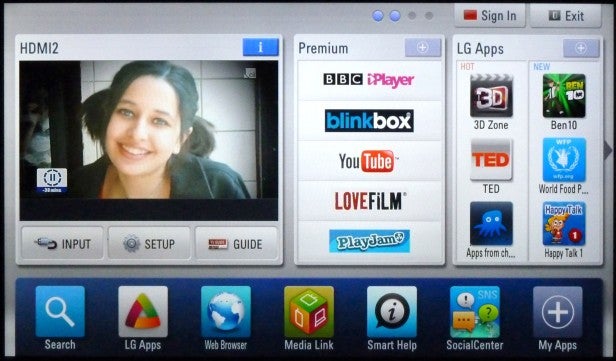 LG’s attempts to keep up with the Joneses have also seen it adding more content so fast it’s become hard to keep up with it all. Certainly its Smart TV platform now has plenty of good video stuff to keep you entertained, including the BBC iPlayer, AceTrax, YouTube, Blinkbox, PlayJam, ITN, the Cartoon Network, HiT Entertainment, Autocar, the RedBull TV ‘extreme sports’ channel, and the MLB.tv baseball service. It also has a striking wealth of more niche video services, and dozens and dozens of small utility/game/news apps – including Twitter, Skype and Facebook.

While we mostly admire LG’s enthusiasm and drive in hunting down content, though, our admiration comes with a couple of pretty serious riders.

First, as with Samsung’s Smart TV system, the wealth of smaller, non-video apps available contains rather a lot of tripe. In fact, we’d say the majority of the smaller apps aren’t worth the screen space they appear on. This means it can be harder to find the genuinely useful apps than it should be.

The other problem with LG’s content explosion is that it seems to have got ahead of the ‘engine’ behind LG’s Smart TV service. We’ve consistently found when using LG TVs over the past 12 months that they’re more prone to crashing out when using Smart TV features than the Smart TVs of any other brand. We’ve also found LG’s Smart TV menus to load and respond rather sluggishly.

These are important issues for LG to sort out, since it’s likely that a normal user would only have to experience crashes and long delays a handful of times before they felt put off forever from bothering with their TV’s Smart functionality again.