This well-made soundbar delivers a big, if rather front-heavy, soundstage thanks to Dolby Atmos and DTS:X. There’s also Google Assistant built-in, but a lack of support for HDR10+ and eARC disappoints, and wall-mounting vertically will compromise the sonic performance.

What is the LG SL9YG?

The LG SL9YG is the latest mid-range soundbar from the Korean manufacturer, building on last year’s models by adding DTS:X support and built-in Google Assistant.

The SL9YG uses a 4.1.2-channel speaker configuration and carries over the Dolby Atmos decoding and Meridian Audio technology found on LG’s 2018 soundbars.

It sports a new slimline design and can be installed in two different orientations, depending on whether the SL9 is stand or wall-mounted.

The LG SL9YG is sleeker than last year’s model, dropping the curved edges for something more angular. A lower height also means that it shouldn’t block your screen. However, it retains the wrap-around mesh grille, excellent build quality and dark-grey brushed metal finish.

The SL9YG is a fairly big soundbar, and will suit TVs of 55in and larger. The forward- and side-firing speakers are located behind the mesh grille, and on the top of the soundbar are large circular drivers that fire upwards to create the overhead effects. 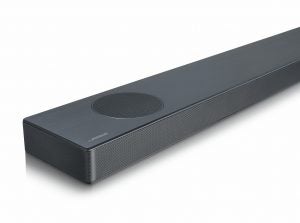 The LG can be mounted horizontally in front of your TV, or vertically up against the wall using the provided brackets. The soundbar should recognise the different orientation, adjusting the audio processing and switching from the display at the front to the one on top. 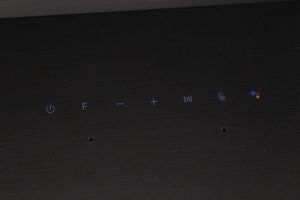 The two five-character displays are fairly basic, and each one features four LED indicators underneath for Google Assistant. There are some basic touch-sensitive controls, which are located at the centre of the main unit, beneath the top display. 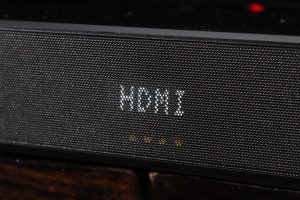 These controls allow you to select input, change the volume, turn the power on and off, play/pause, mute the built-in far-field mics, and activate Google Assistant. The latter provides voice control, while LG also includes a handy remote app (iOS and Android). 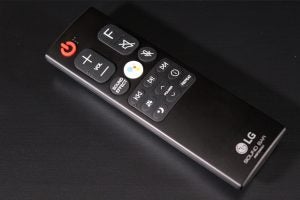 The remote is small and fiddly, but includes large buttons for power, volume, function (for cycling through the inputs) and mute, along with buttons for selecting sound effects, playback, info, repeat, night mode, sound tuning, muting the mics, and activating Google Assistant.

LG SL9YG features and connectivity – Dolby Atmos and DTS:X, but no support for HDR10+ or eARC

It supports immersive object-based audio in the form of Dolby Atmos and DTS:X. While the soundbar and subwoofer can deliver 4.1.2 channels out of the box, those wanting surround channels will need to buy the optional SPK8-S wireless rear speakers. 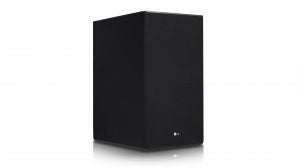 If you install the SL9 vertically against the wall, it automatically senses the different orientation and optimises the speaker layout. Meridian’s advanced digital signal processing widens and raises the soundstage to adjust for the forward-firing speakers now facing downwards.

The SL9YG supports high-resolution audio thanks to a 192kHz/24-bit DAC, and can handle MP3, WAV, AAC/AAC+, AIFF, OGG, and FLAC file formats. There’s also Chromecast built-in, allowing you to cast songs, podcasts and stations from Tidal, Spotify, YouTube and more. 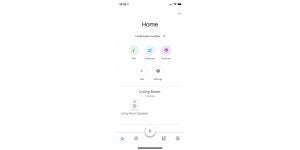 The G at the end of SL9YG indicates that Google Assistant is built-in, allowing you to vocally interact with the soundbar, play music and much more. Simply say “Hey Google”, or press the Google Assistant buttons on the main unit, controller or remote app, to benefit from a fully functioning smart speaker that’s at your command. 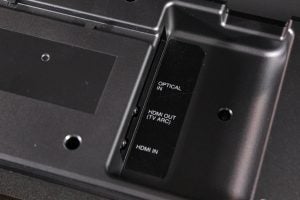 The connections are located in a recessed area on the underside of the soundbar and comprise an HDMI input, an HDMI output with ARC, and an optical digital audio input. In terms of wireless connections there’s built-in Wi-Fi (2.4 and 5GHz), Bluetooth (v4.2 SBC), and support for Google Chromecast.

The HDMI ports can pass 4K/60p, wide colour gamut, HDCP 2.2, and high dynamic range (specifically HDR10, HLG, and Dolby Vision). Unfortunately, there’s no support for HDR10+ or eARC, which is a shame because both should be standard in 2019.

LG SL9YG performance – A powerful performer, but it struggles when wall-mounted

The LG SL9YG is easy to set up – just follow the instructions on the Google Home app. However, your choice of installation will have a serious impact on performance. Placing the  soundbar horizontally in front of the TV is fine, but installation vertically up against the wall using the provided brackets is far from ideal. Ironically, one of the SL9’s big selling points is also one of its failings.

When installed horizontally, the speakers are all in their correct orientation: the front drivers fire forwards, the width drivers to the sides, and the overhead channels fire upwards. However, mounting the soundbar vertically against the wall means that while the width drivers still fire to the sides, the front drivers now fire downwards and the overhead channels are firing forwards.

LG claims that digital processing developed by Meridian corrects for the different orientation, but common sense tells you this isn’t ideal. Any doubts are confirmed during testing, with the performance compromised when positioned vertically against the wall. The front soundstage loses its definition, while the presence of the height channels disappears. 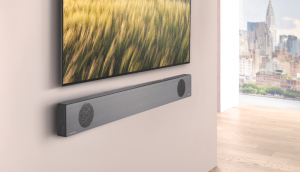 Thankfully, when placed horizontally the SL9 is able to display its full potential. This soundbar is surprisingly musical, handling two-channel audio particularly well. There’s a good sense of stereo imaging, and the wireless subwoofer is well integrated to create a solid soundstage. Listening to Placebo’s Every Me, Every You reveals a detailed sound, an accomplished delivery, and a driving beat.

This basic performance extends to TV programming, which is primarily based around two or three channels. The SL9 doesn’t include a dedicated centre speaker, but dialogue remains clear and focused on the screen. Music is placed either side of the screen, while effects are peppered across the front of the room and the sub adds a solid foundation of bass.

The majority of programming, from the news and game shows, to cooking competitions and documentaries all sound excellent. Sport is also hugely enjoyable, with the SL9YG creating a suitable big and commanding sound that fills the room with crowd noise, while keeping the commentaries clear. TV dramas with multi-channel mixes also sound good, but they lack surround effects. 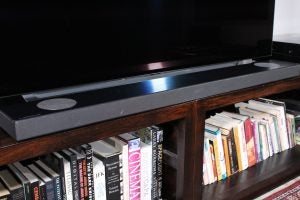 Switching to Dolby Atmos and the entire performance kicks up a gear. The anti-terrorist action of Jack Ryan on Amazon Prime delivers superb sonics, and its object-based audio produces an impressive wall of sound at the front of the room. The upward-firing speakers create the illusion of overhead effects, while the sub gives gunfire and explosions greater impact.

The effectiveness of the upward-firing speakers does depend on your ceiling, but if it’s flat and low then you will likely be pleased with the results. The lack of any actual rear speakers does mean the acoustical signature is very front heavy, but the soundbar fills the first third of the room.

The original Hellboy has a fantastic new Atmos mix that includes plenty of rain and thunder overhead, combined with some well-placed effects and deep bass.

The LG can also decode DTS:X, and the 4K Blu-ray of American Gangster includes a cracking new soundtrack that was mixed in the format. The immersive audio places you on the streets of Harlem in the early 1970s, with elevated trains rumbling overhead and the people milling about. The action scenes are suitably visceral, with shotguns blasting across the room and bullets ricocheting all around.

Should I buy the LG SL9YG?

The LG SL9YG is a good-looking and well-constructed soundbar that delivers a solid sonic performance. Thanks to support for Dolby Atmos and DTS:X, it can produce a big soundstage that really fills the front of the room. There’s width and height alongside clear dialogue, despite the lack of a physical centre speaker.

The bass is well integrated and creates a solid foundation that gives the overall sound greater depth. Since there are no surround speakers, the performance is concentrated at the front of the room, but it remains enjoyable.

The inclusion of Google Assistant turns the SL9 into a fully functioning smart speaker as well as a soundbar, and it’s also a good music source thanks to high-resolution audio and various streaming services delivered via Wi-Fi, Bluetooth or Chromecast.

It isn’t perfect, though, with a lack of support for eARC and HDR10+. The biggest disappointment, however, is ironically one of the main selling points – wall-mounting the SL9YG adversely affects the sound quality and is best avoided.

If you’re looking for alternatives, the Samsung HW-Q70R is an obvious choice. At £699 it’s cheaper, but still manages to include a few extra features such as HDR10+ passthrough.

The Q70 supports Dolby Atmos and DTS:X thanks to a 3.1.2-channel setup, which means it even has a dedicated centre speaker – although, like the SL9, there’s only one HDMI input. The Samsung doesn’t have a built-in smart assistant, but it works with Amazon Alexa and also sounds great with music.

Another possibility is the Panasonic SC-HTB900, which also supports Atmos and DTS:X, and currently costs £695. This 3.1-channel soundbar and subwoofer combo has equally slimline looks, but uses psychoacoustic processing to create the illusion of immersion.

It isn’t as impressive with object-based audio as the SL9YG or HW-Q70, but sounds just as good with TV and music. Like the LG, it doesn’t support eARC or pass HDR10+ – and, unfortunately, it can’t handle Dolby Vision either.