Dolby Atmos soundbars are the current superstars of the audio world, and having auditioned models from Samsung and Sony, I now get to see what LG can do. The Korean giant explodes onto the scene with a feature-packed Atmos bar that chugs 5.1.2 channels of expansive audio goodness into your living room without clogging up the place with speakers.

The SJ9 offers a step up from the £400 LG SJ8, not only adding Atmos but increasing the power output too. As a result, the price leaps to £800, which is a huge outlay by soundbar standards – although it’s no more expensive than its rival the Samsung HW-K850. Let’s see how the LG measures up. 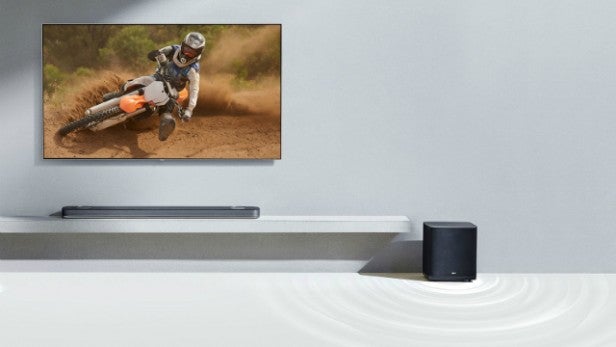 With its extra Atmos hardware, the SJ9 is deeper and bulkier than the super-slim SJ8, but still sits lower than the Samsung HW-K850 and never threatens to block my TV’s remote sensor. At a whopping 1.2m wide it’s designed for TVs 55in and above, and styled to match LG’s 2017 screens. 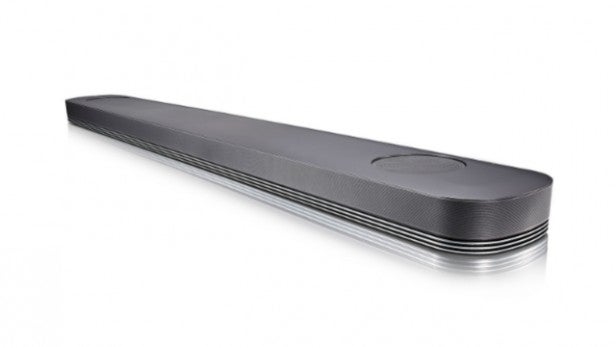 It’s actually the most attractive Atmos bar to date, sporting a gunmetal grey finish, aluminium grilles and curved ends that follow the curve of the up-firing Atmos speakers. The look is enhanced by three silver strips running along the bottom and top-mounted speaker grilles that hint at the Atmos excitement ahead. 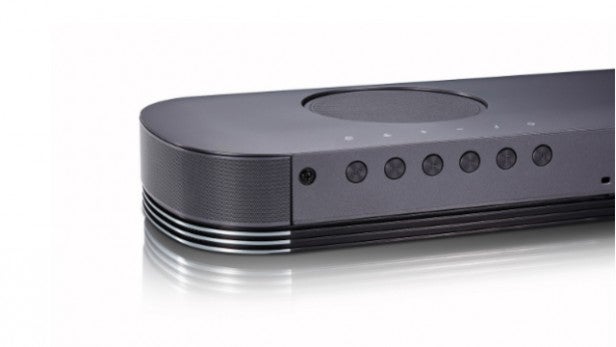 Parts of the bodywork have the plasticky feel common among the big-name brands (particularly the top panel) but, otherwise, it’s a solidly built and good-looking unit. Wisely, LG keeps clutter to a minimum by placing the buttons on the rear, with corresponding icons on top. They include volume, source selection, Wi-Fi and multiroom setup. A decent-sized LED display on the front keeps you abreast of inputs, sound modes and volume. 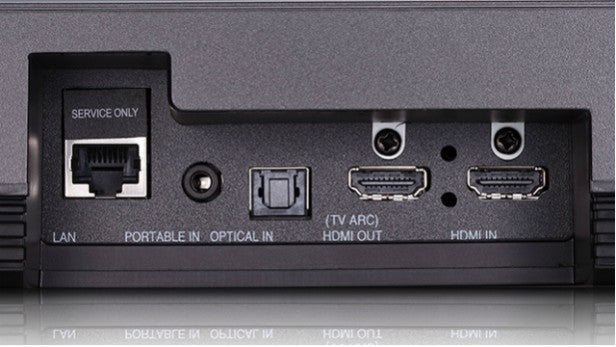 A recess on the back houses an HDMI 2.0 input and output, which support HDCP 2.2 and 4K/60p/HDR pass through. Rig up your Blu-ray deck using these and it will also deliver the Dolby Atmos track to the soundbar. In an ideal world the SJ9 would provide a few more inputs for games consoles and TV boxes, but the optical, 3.5mm mini-jack and HDMI ARC provide some possible workarounds. 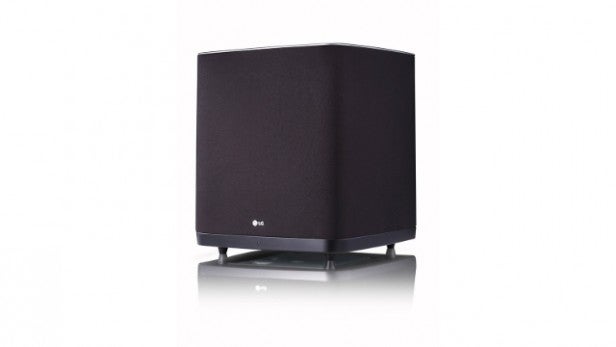 The accompanying subwoofer gets a high living room acceptance rating with its cloth-covered edges and curved corners. Crucially, its compact size and wireless connectivity should make it easy to place in the room. It’s solid and stable, which bodes well for its bass capabilities.

The SJ9 is a 5.1.2-channel Atmos soundbar, with two channels of dedicated height audio delivered by the up-firing drivers. The SJ9’s front channels use 40 x 100mm woofers and 20mm dome tweeters; the rest use woofers only. The bass reflex subwoofer packs a 6.5in woofer. 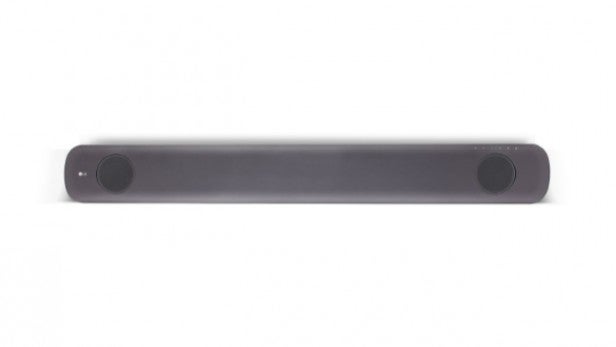 Overall power output is quoted as 500W, with 43W going to each of the seven front, centre, surround and top channels. The remaining 200W is contributed by the subwoofer (and, yes, I’m well aware that adds up to 501W, but what’s a watt between friends?) 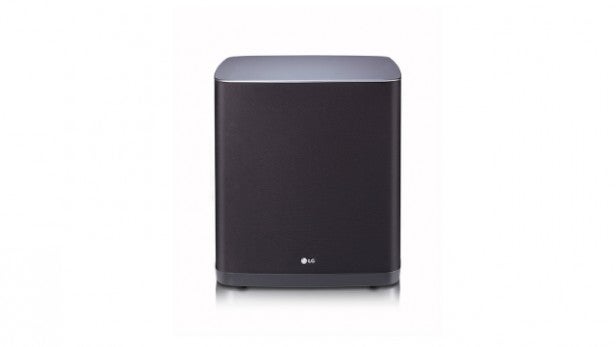 Away from Atmos, the SJ9 offers built-in Wi-Fi and Bluetooth 4.0, opening up a plethora of wireless streaming options. There’s Spotify and built-in Chromecast, allowing you to beam audio from compatible apps such as SoundCloud, YouTube and Deezer.

If you have multiple Chromecast speakers then you can create a multiroom system using the Google Home app. Alternatively, the SJ9 can be incorporated into LG’s MusicFlow multiroom system, alongside the company’s other wireless speakers – which can also be used as rear channels in a 5.1 system.

The MusicFlow smartphone app lets you stream music from your phone, from PCs and NAS drives on your home network, and from built-in apps such as TuneIn radio. Hi-res music is supported up to a maximum resolution of 192kHz/24-bit. 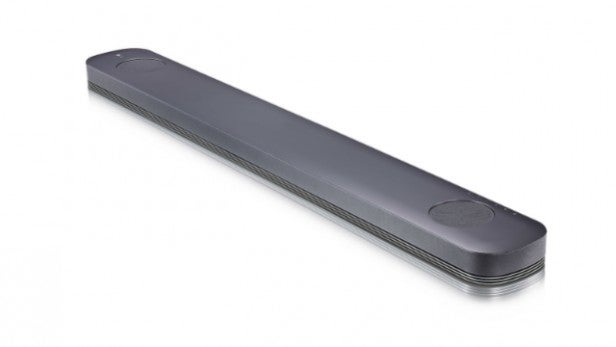 Elsewhere, Adaptive Sound Control analyses the incoming frequencies and selects the ‘optimum sound mix’ for what you’re watching, while the Auto Sound Engine maintains the best sound balance at different volumes. There’s also a range of sound presets, including Standard, Movie, Music and Bass Blast – the latter should be avoided at all costs due to its exaggerated bass and forced mid-range.

Finally, as well as Dolby Audio, the SJ9 can also decode Dolby TrueHD and DTS-HD Master Audio tracks. But, sadly, its talents don’t stretch to DTS:X.

The SJ9’s compact remote sports a tidy array of black rubber buttons that cover most bases. It’s fine but a little too small for comfort, plus the cheap plastic casing is out of keeping with such an expensive soundbar. 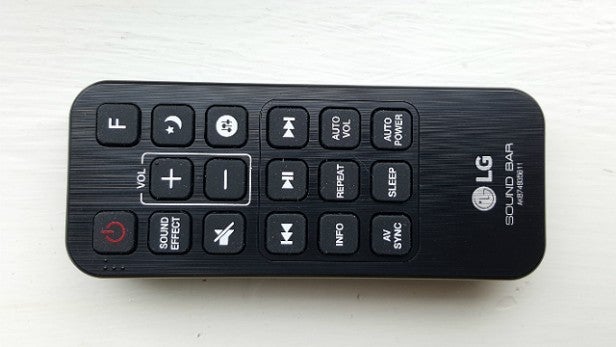 Setup is easy. You can run a Blu-ray deck through the HDMI ports or simply connect your TV via optical and let the LG play whatever you’re watching.

Some users have reported issues passing through 4K HDR pictures from a Blu-ray deck, but sandwiched between my Samsung UBD-M9500 player and UE55KS9000 TV I encountered no problems whatsoever. Samsung happily handshaking with LG? In other news, Labour and the Tories have formed a coalition. 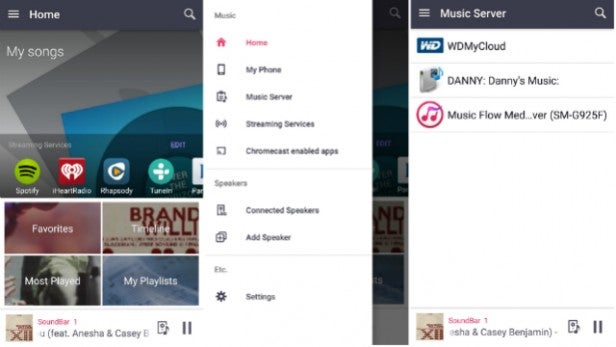 The MusicFlow app is an alternative remote control, allowing you to adjust the volume, skip tracks and tweak the EQ from the attractive Now Playing screen. The rest of the app uses attractive menus with stylised icons and bold colours. Logically structured menus makes navigation a cinch – the ‘Music’ sidebar menu is particularly helpful – while the busy Home page is jazzed up by colourful cover art. 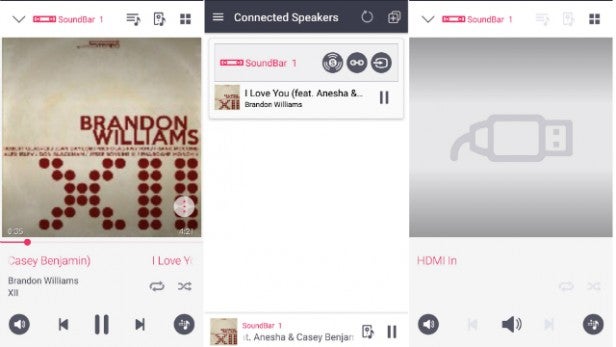 The only thing that grates – and it’s a pretty big thing – is the app’s puzzling inability to scroll all the way down any list when browsing my WD Cloud NAS drive. For example, I could only access down to the letter D in the ‘Album’ list, and the artist list didn’t even get past the As. None of the other multiroom apps I’ve used suffer this problem.

I head straight for Atmos favourite Mad Max: Fury Road, the LG turns in a blistering performance with the movie’s ferocious soundtrack.

First up, Tom Hardy’s growling voice sounds absolutely massive, coming at you like a wall of sound with deep bass and plenty of husky top-end detail. When the car zooms over the camera from behind, the roaring engine is placed high above the screen. 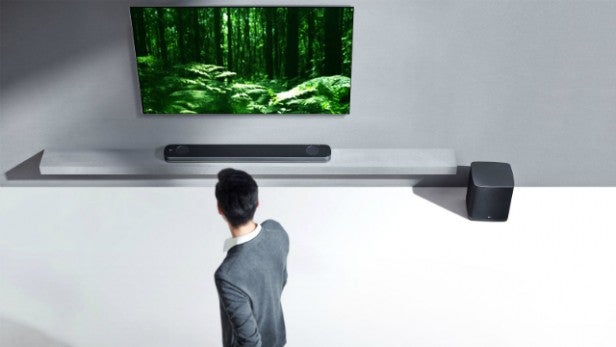 As the Buzzards attack Furiosa’s convoy in their spiky cars, the LG goes into overdrive with explosions so beefy and vigorous it’s like you’re riding alongside them. Harpoons swoosh, weaponry clanks and engines roar – it’s a real tour de force.

The LG creates a suitably large soundstage when the cars enter the sandstorm, pushing effects high and wide. It paints an immersive sonic picture with precise placement and quick, decisive movement. 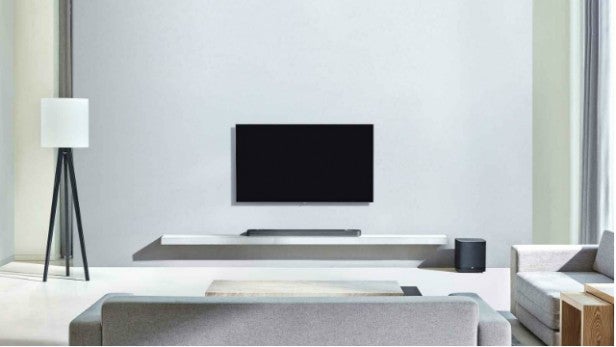 The Atmos channels add flavour, lifting those harpoons and tumbling cars, but this isn’t really what makes the LG’s performance so enthralling. More important is the SJ9’s immense power and attack. It’s a remarkably potent soundbar, tackling effects with gusto and filling even a large room with consummate ease.

It’s smoother, louder and more composed than the SJ8, and unlike its little brother doesn’t trouble the eardrums when you push the volume high. 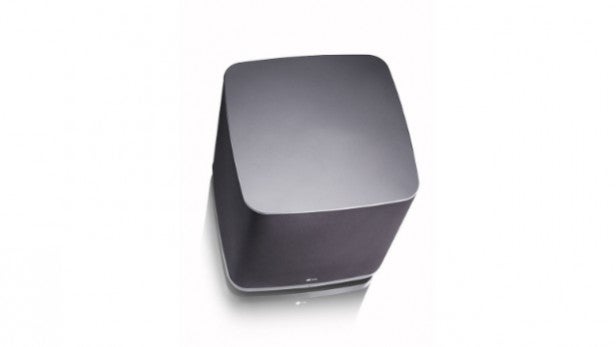 The subwoofer also does a decent job, offering big, weighty bass and giving explosions a hefty thump. It’s a little too thick and woolly to truly satisfy, but it follows the action keenly and merges well with the subwoofer. If you listen to the soundbar in isolation then there isn’t a lot going on in the bass or lower-mids, but together they form a cohesive union with no obvious ‘holes’.

Dialogue reproduction is excellent: articulate, full-bodied and locked to the middle of the screen. I’m also impressed by the LG’s detail levels. It’s not audiophile grade, but treble is crisp and airy, and you can hear different textures and subtleties during quieter scenes. 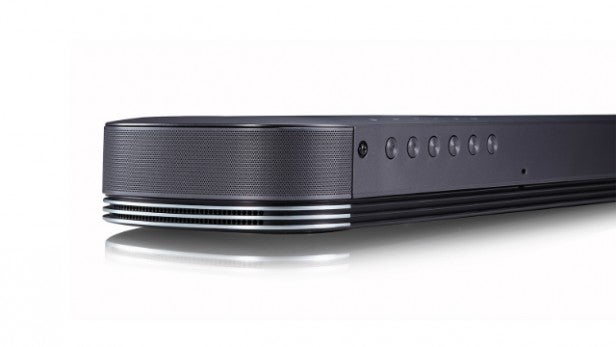 The only issue I have with the SJ9 as an Atmos system – and this goes for all Atmos soundbars, to be fair – is that it can’t place effects above you like a full Atmos speaker array. You get a clear feeling of height and expansion, but it’s all happening in the space around the screen, rather than above the listening position. The Samsung HW-K850 is more successful in that respect, projecting height effects further into the room, but it’s still no match for a full Atmos array.

The same is true in terms of surround effects. The soundstage is certainly wider and more immersive than a regular soundbar, but effects are merely pushed to the space either side of the TV, rather than enveloping you in the action. 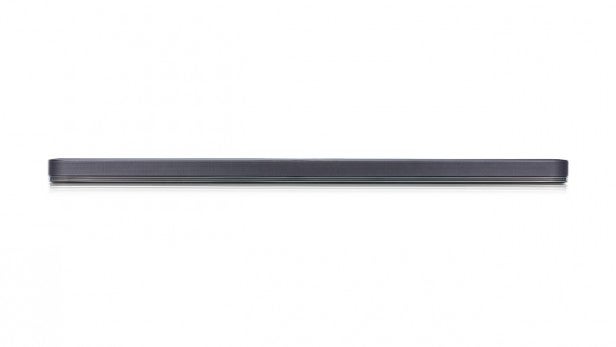 I was, however, pleasantly surprised by the SJ9’s talents as a music player. Playing a bunch of CDs and tracks from a NAS drive, the LG delivers an open, detailed and well-balanced sound with eager support from the subwoofer. There isn’t enough warmth and nuance to be taken seriously by hi-fi lovers, but the SJ9’s powerful, rhythmically engaging performance should impress everyone else.

Just one more annoying thing to report – when playing music, the subwoofer often takes a couple of seconds to kick in at the start of each track, leaving you with a bass-free intro. 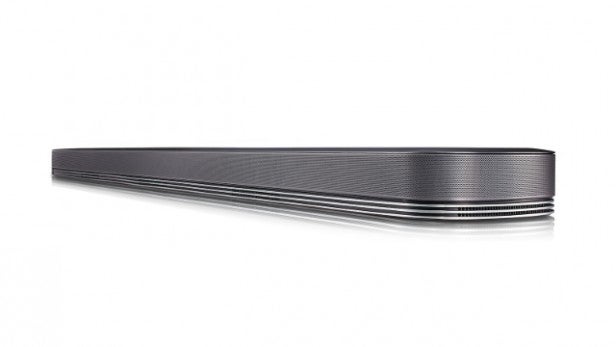 Should I buy the LG SJ9?

If you accept the limitations of its Atmos performance then the SJ9 is worth every penny of its asking price. It’s an immensely powerful soundbar, attacking effects with gusto and generating a huge Atmos soundstage that reaches high and wide.

The sound is anchored by deep and well-integrated bass from the wireless sub and peppered with crisp high-frequency detail. That all adds up to a wildly entertaining sound, which knocks the slimmer SJ8 into the proverbial cocked hat. It’s attractively styled and packed with features, allowing you to stream music from a wide range of sources.

On the downside, I experienced problems streaming from my NAS drive, and the inclusion of a single HDMI input is a tad stingy for an expensive flagship soundbar. DTS:X support would also have been nice. Otherwise, the superb SJ9 is a great advert for Dolby Atmos and a terrific introduction to the delights of 3D audio.