The SH7 is an affordable 4.1-channel soundbar from LG’s Music Flow range, boasting multiroom functionality and a wireless subwoofer. It’s primarily designed to boost your TV’s sound quality, but with the ability to stream music via Bluetooth, DLNA and Spotify, it’s also a versatile hi-fi system. 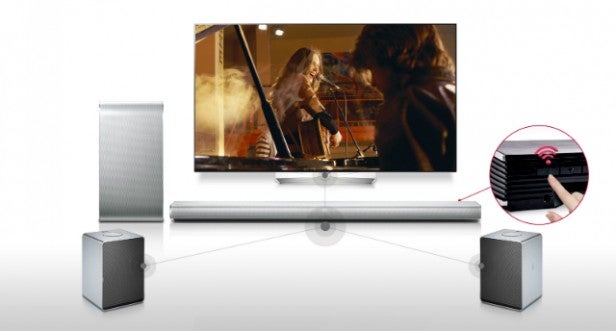 The first thing to catch the eye about the SH7 soundbar will be how skinny it is. With a height of just 53mm, it’s discreet, easy to place and unlikely to block your TV’s remote sensor – all great news if space is tight.

Designed to match select LG TVs, the SH7 has been crafted with a sense of panache missing from most budget soundbars. The brushed silver finish, sloping top panel and curved front grille make for an attractive combo, while the ridged sides are an unusual touch. In terms of build quality, the plastic panels are reminders of the budget price tag, but on the whole it’s solidly put together. 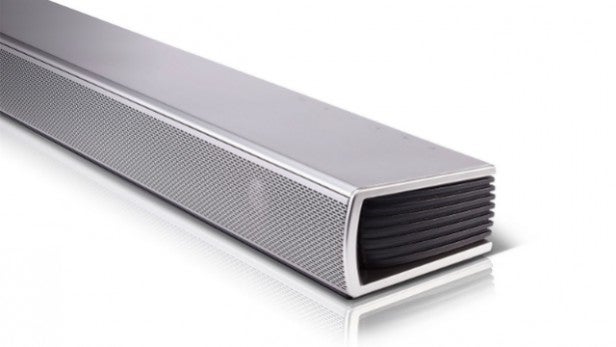 LG takes the unusual step of placing the buttons on the back, keeping them hidden away. There are standby, volume, Wi-Fi setup, input selection and Add keys, the latter joining the SH7 to a network of other Music Flow speakers. There’s no text display, just a single LED that shines through the speaker grille.

On the back of the soundbar you’ll find a healthy selection of sockets. There’s an HDMI input and an ARC output, capable of passing through 4K and 3D signals – these aren’t always guaranteed at this price. They’re joined by an Ethernet port, 3.5mm analogue input and optical input, the latter providing a simple way of connecting to your TV.

The HDMI ports face sideways in a recess underneath, making the cables easier to manage, whereas the optical and 3.5mm jacks face outwards. 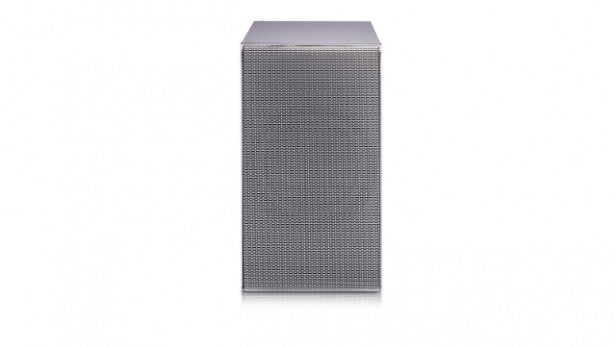 The compact wireless subwoofer is similarly unobtrusive, allowing for easy placement anywhere in the room. It’s good-looking too, with a curved grille to match the bar, but up-close inspection reveals traces of “budgetitis” in the exposed chipboard and vinyl finish.

The SH7 is a four-channel soundbar equipped with two woofers and two tweeters, each driver receiving 40W of power. Add 200W from the sub and that amounts to a total power output of 360W. 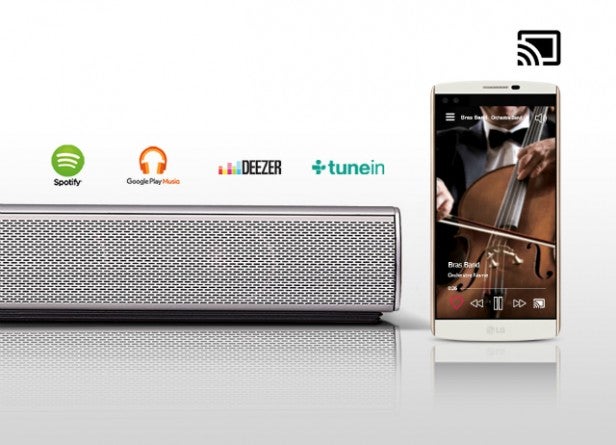 The clear highlight on the feature list is Music Flow, LG’s multiroom system. Using the Music Flow smartphone app, you can stream music from PCs and NAS drives to the soundbar and other LG speakers simultaneously over the mesh network. You can also access a range of music streaming services including Spotify, Napster, Deezer, Google Play Music, TuneIn and NPR One.

Google Cast makes it easy to play music from compatible apps through the SH7. There’s Bluetooth too, with special tech that detects your device when you walk in the room and wakes the bar up when you start playing music.

Adaptive Sound Control automatically tweaks the EQ based on what you’re watching, while the Auto Sound Engine balances the sound as you increase or decrease the volume level.

Like systems from Samsung and Panasonic, LG’s soundbar allows you to use a pair of smaller speakers as rear surround channels. LG has simplified the process by creating a one-touch Home Cinema Mode button within the Music Flow app.

Before I get into Music Flow, it’s worth noting that the SH7 is remarkably easy to use as a standalone soundbar. The supplied remote leaves a lot to be desired in terms of build quality, but the rubber buttons are nice to press and well labelled.

There are dedicated buttons for practically every sound mode and the volume keys are clearly marked. It even sports play and track-skip keys for Bluetooth and Wi-Fi playback. You can toggle through the inputs using the “F” key. The EQ button offers bass, treble and subwoofer adjustments, the latter ranging from -15 up to +6. 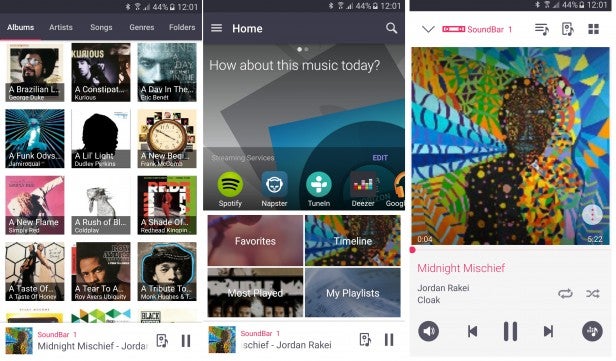 When connected via Wi-Fi, the SH7 can also be controlled using the Music Flow app, allowing you to select the relevant input and adjust the volume and sound modes. It’s a decent interface for music streaming, using a series of neat, uncluttered menus with plenty of helpful icons. The tile-based homepage offers recommendations, favourites and streaming services, jazzed up by classy graphics.

However, it isn’t the most intuitive app I’ve encountered. It took a little while to get used to the layout and figure out how to access my NAS drive.

You have to sync your preferred server with the Music Flow app in the setup menu. Fine – but with more than 20,000 tracks in my library, it was a long-winded process. On further investigation I found that it would only sync albums up to the letter D, no matter how many times I tapped “update”. What’s more, any new songs you add to your NAS drive aren’t added automatically – you have to keep syncing it. 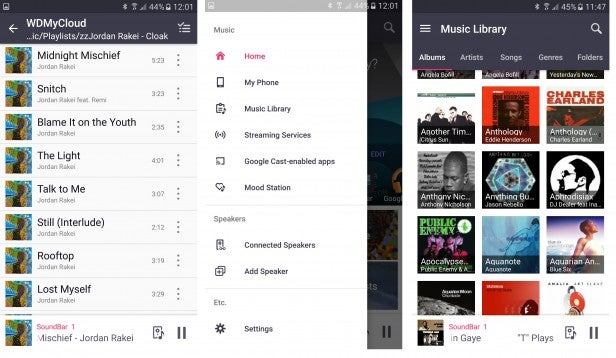 The main sidebar menu lets you select various music sources and speakers. Tap the Gracenote-powered Mood Station mode and it will split tracks into different types, such as “energizing” or “melancholy” – although the appearance of 99 Problems by Jay Z in the “Calm” section suggests that it isn’t entirely reliable.

The Now Playing screen is particularly good, offering a track time slider, access to sound modes, and an option to tweet about the track you’re playing. The Connected Speakers menu displays each speaker in a panel and lets you group them together by tapping the chain icon.

What the SH7 lacks in sonic finesse it makes up for in sheer enthusiasm and excitement, throwing itself head-first into movies, TV and music. It’s lively and engaging, but never threatens to break into audiophile territory.

Playing The Hobbit: The Battle of the Five Armies, the LG’s attacking tone, ample power and crisp treble results in an effortlessly entertaining listen. Smaug’s destruction of Lake Town has plenty of muscle and impact – buildings shatter vigorously and fire crackles with aplomb. It’s feisty and dramatic, but hardly subtle.

The system doesn’t struggle to fill the room either, despite its slinky dimensions. As the dragon swoops around the screen you get a convincing sense of its size and scale, enhanced by impressive vertical expansion.

The star of the show is the subwoofer, which is more capable than its price and build quality suggest. Its punchy, responsive bass fleshes out the sound nicely, lending depth and presence to Smaug’s voice. Sure it never achieves the seamless bass slam of a more competent sub, but overall it does a terrific job.

Like most LG soundbars, the SH7’s tone leans towards brightness, resulting in a crisp, sparky sound with plenty of bite during battle scenes. It’s also nice and detailed: as the villagers regroup on the shores of the lake, the flurry of footsteps, clanking, animal noises and rustling branches is utterly immersive.

Ultimately, though, the SH7 is let down by a lack of warmth and body in the mid-range. Turn off the subwoofer and you can instantly hear the soundbar’s limitations – it’s thin and compressed, giving the sub very little to hang onto.

As a result, all the clashing swords and shrieking creatures during battle scenes can sound spiky, particularly at high volumes. Sitting through three hours of relentless Middle-earth warfare can be tiring on the ears. While I admire the SH7’s ability to make an impact, it does come at the expense of poise and long-term listenability.

After playing with the sound modes, I found Standard to provide the best overall balance. Movie mode lifts the bass a little but lacks the clarity of Standard, while ASC works well with TV material but lacks the requisite punch for movies.

It’s worth noting that the SH7 is a superb choice if you watch a lot of TV – its naturally forceful tone makes speech easy to hear, even with family members jabbering away in the living room.

The SH7 also makes a perfectly serviceable hi-fi system. The crisp, detailed tone works in its favour, lending a cutting-edge to snare drums and making treble sound clear, while the subwoofer eagerly thumps in time with basslines and drum beats. Voices sound a little thinner than they should, and there isn’t a great deal of nuance in the mid-range, but that’s hardly surprising for an affordable soundbar and doesn’t detract greatly from its generally enjoyable sound. 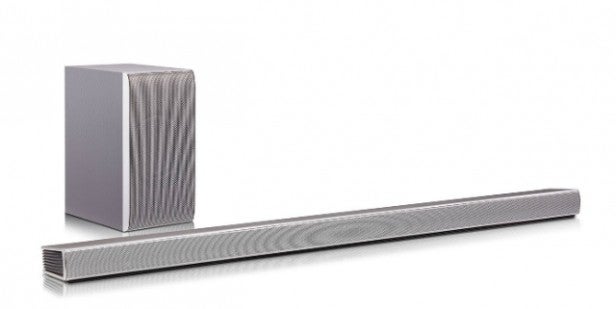 Should I buy the LG SH7?

If the SH7 was a football team it would be a mid-table side – not talented enough to challenge for the title, but certainly not relegation fodder. It’s worth investigating, but pound for pound, the identically priced Samsung HW-K650 is a better option.

There are plenty of positives: the stylish low-profile design is easy to accommodate and there’s a healthy array of sockets on board. What’s more, it’s easy to use and serves up plenty of features for a decent price – including Google Cast, multiroom and a wide range of music services.

In terms of performance, the SH7 delivers an exciting sound with ample attack and detail, backed by big bass notes from the surprisingly competent wireless subwoofer.

However, it doesn’t give two hoots about refinement or subtlety, while the thin, spiky mid-range can be exhausting over the course of a three-hour action epic. Elsewhere, I had some issues with the Music Flow app, which lacks the intuitive feel of rival apps and made it tricky to access my music.

It’s a powerful performer for the money and offers a generous range of features, but the SH7’s spiky tone and clumsy app design let the side down.