LG’s new keyboard caused quite a stir at IFA 2015, and it’s easy to see why. It’s a far cry from the dull slabs of dusty plastic most of us are used to stabbing our digits at.

The attention-grabbing keyboard, which will be available to buy for $119 (£80) later this month, is flexible. Actually, that barely does the Rolly justice. 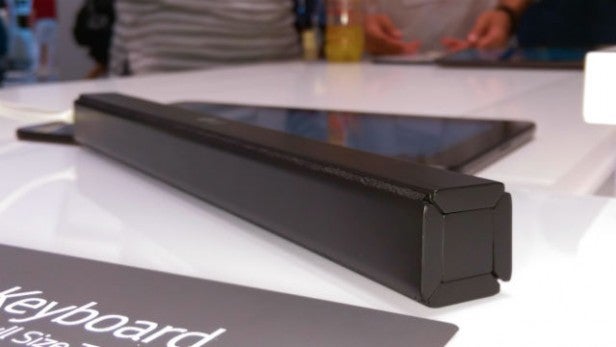 You can roll the thing up like a chunky wand, making the Rolly very portable indeed. You can even flap it around like a wad of paper (if you’re into that) or drape it over the edge of your desk like the consumer tech of Salvador Dali’s dreams.

Practicality is the key, though. As it weighs a shade over 150g and measures only 263 x 25.3 x 25.3mm when it’s furled up, you can easily carry the LG Rolly keyboard around in a bag or large pocket. Skinny jeans lovers may struggle, however.

So how has LG managed to make it so flexible? With surprising simplicity, actually. 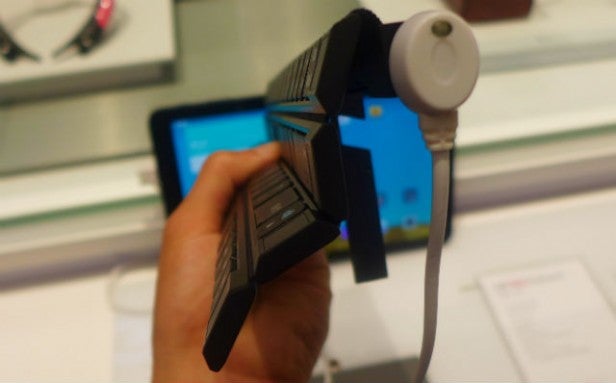 The Rolly is essentially made up of five thick panels of plastic attached to a pliable base. Keys sit on four of these panels, while the battery – a single AAA that should deliver up to three months of life – is concealed inside the fifth. Magnets bookend the button-wielding panels, interlocking and holding the Rolly tightly together when you bundle it up.

It’s effortless and very satisfying, particularly as it snaps loudly when fully curled up. The battery sits neatly between the four other panels. Playing with a keyboard shouldn’t be this much fun.

Unfurling the Rolly requires a little more focus, as it can take a few seconds to figure out which seam to jam your finger into and tug at. An arrow indicates where the weak link is, but it’s small and hard to spot. 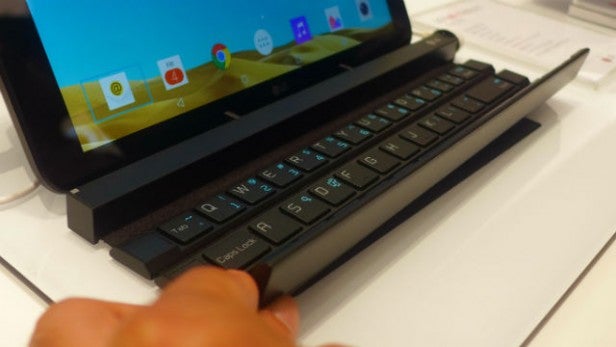 Once you do manage to worm your way in and loosen the invisible bonds, the Rolly lies perfectly flat, concealing its special talent impressively.

Its island-style keys are, in general, pleasantly large and well spaced. However, LG has clearly made some compromises to keep the Rolly compact. There’s no numbers row, for instance, and I’d prefer the arrow, full stop, comma and question mark keys to be a touch wider than they are, as they’re all easy to miss with your fingertips.

That said, I’m impressed with the amount of travel each key offers. At 17mm, the Rolly’s buttons fall just shy of the 18mm key pitch widely accepted as the ideal number. That 1mm difference is barely noticeable, however. 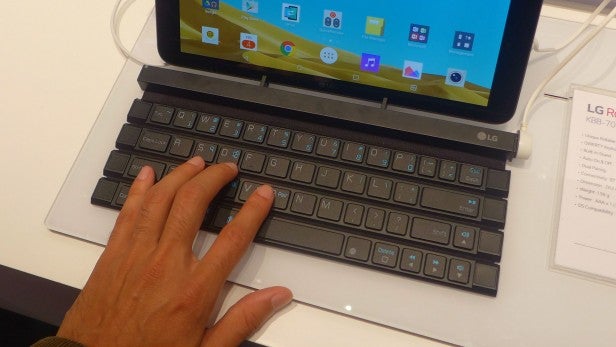 I got used to typing on the Rolly within a minute, and found the experience surprisingly comfortable, considering how small it is.

Another pleasant feature is multi-device connectivity. Conveniently, the keyboard can hook itself up to two different Bluetooth-enabled Android, iOS or Windows gadgets at once, meaning you can switch between typing on your tablet and phone in an instant.

At the top of the battery-holder, meanwhile, is a pair of plastic arms that fold out to hold either a smartphone or tablet, tilting your device of choice ever so slightly backwards. However, this isn’t the most secure contraption we’ve ever used. Both tablets and phones sit loosely in the cutouts, rocking around precariously whenever you move the keyboard. 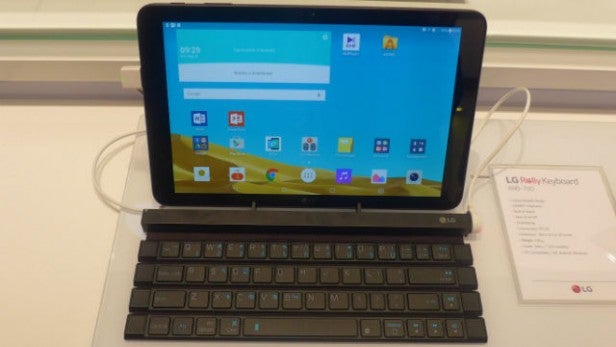